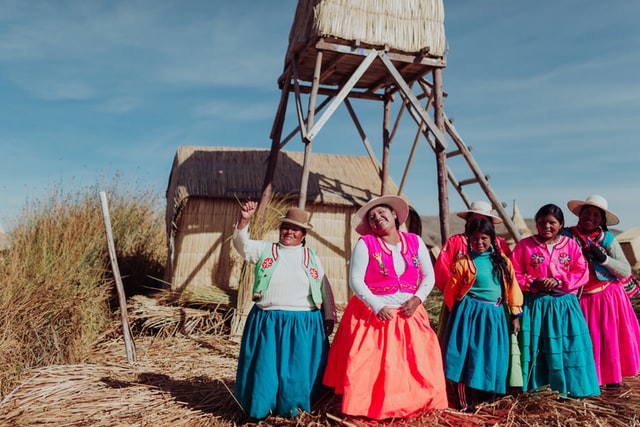 The official languages spoken in Peru are Aymara and Spanish. Therefore the names are commonly influenced by Spanish and Latin origin.

The history of Peruvian surnames shows that often they are named after the father's paternal family or mother's paternal family name. Also, most names have been derived from Spanish origin. Peru is situated in South America, where the culture is diverse and ethnic. The surnames are considered a crucial part of the family name for representation in society. Many of the Peru names are religious or saint's names. Most surnames are connected to their ancestral roots.

Read on for some Peruvian last names we think you'll like, and for more last names, take a look at Brazilian Last Names and Mexican Last Names.

Peru has a beautiful mix of Hispanic and native traditions. The people of Peru have traditional family values while giving the child a surname. Here is the list of some of the most popular surname in Peru.

5. Cáceres (Spanish origin) derived from the city in Western Spain. Andrés Avelino Cáceres is a former President of Peru.

7. Campos (Spanish and Portuguese origin) meaning "dweller in the fields". This last name is associated with Peru based football player, Angelo Campos.

8. Cardenas (Spanish origin) meaning "from the land of thorns."

12. Fernandez (Spanish origin) meaning "son of Fernando" It is one of the most common surnames used in Peru. Raúl Fernández is a famous footballer.

15. Gomez (Mexican origin), and is derived from the name Gomo.

18. Hernandez (Spanish origin) meaning "Hernando's son." It became one of the most common last names around the 15th century.

20. Leon (Spanish origin) meaning "lion" in Latin. It is a popular name from Greek mythology from the fifth century.

21. Lopez (Spanish origin) meaning "son of Lope; the wolf." Certainly one of the most popular last names in Latin America and Peru.

22. Mamani (Pre-Hispanic origin) meaning "falcon". This last name is the name of a tree found in the Hawaiian mountain.

23. Martinez (Spanish origin) and is derived from the personal name Martin whose root is Mars, which is the name of the Roman God of fertility and war.

29. Ortiz (Spanish origin) meaning " the son of the fortunate". This last name is made famous by Peruvian journalist and writer Carlos Ortiz.

30. Pacheo (Portuguese and Spanish origin) meaning "the noble one."

34. Quispe (Quechua origin) meaning "brilliant" and "crystal." This last name is associated with Peruvian painter Diego Quispe. This is the most common surname in Peru.

40. Bautista (Spanish origin) meaning "baptist".It is the Spanish form of Baptist and is most prevalent in Mexico. San Juan Bautista is a district in Peru.

44.Castro (Latin origin) meaning "a castle." This last name is made famous by film director Marco Castro from Peru.

47. Dávila (Portuguese origin) is a habitational name. Cristian Dávila is a Peruvian footballer.

49. Guerrero (Spanish origin) meaning "one who is engaged in combat, a warrior." Paolo Guerrero is a famous Peruvian footballer.

50. Guevara (Basque origin) meaning "a place overgrown with ferns." Che Guevara is the name of a revolutionary who traveled via Peru.

55. Jara (Spanish origin) meaning "rockrose or cistus" and is popular in various places in southern Spain.

57. Juarez (Spanish origin) meaning "occupational, for a swineherd." Juarez or Huarez is a place in Peru.

60. Miranda (Latin origin) meaning "someone who is worthy of admiration."

64. Paredes (Portuguese origin) meaning "dweller near the wall." Cecilia Paredes is the name of a famous artist from Peru.

South America is a subcontinent that consists of Brazil, Peru, Argentina, Columbia, Venezuela and Bolivia, among many others. Most of the people with these surnames can be found all over the southern continent, which shows its diversity. Given below is a list of some South American last names common in Peru and which are the names of famous Peruvians.

69. Contreras (Hispanic origin) meaning "from the surrounding area." Arlette Contreras is a famous Peruvian lawyer and a women's rights activist.

77. Rodriguez (Spanish origin) meaning "Rodrigo's son" It is considered to one of the common surnames in Peru. Alberto Rodríguez is a famous Peruvian football player.

78. Rojas (Spanish origin) meaning "red." A unique surname given to many Peruvians.

79. Romero (Spanish origin) meaning "rosemary, a plant which is sweet and evergreen." A popular first name too.

81. Saavedra (Portuguese origin) meaning "old hall". Jaime Saavedra is a Peruvian economist. It can be pronounced as sa‧a‧ved‧ra.

83. Salazar (Basque origin) meaning "dweller in; palace". Santiago Salazar is a retired football defender who is now a football manager as well.

87. Silva (Spanish origin) meaning "woods or someone who came from Silva." Beto da Silva is a Peruvian footballer and Silva is a famous family name.

92. Vargas (Spanish origin) meaning "someone who came from the steep hill." This last name is made famous by Peruvian football player Juan Vargas.

95. Velasquez (Spanish origin) meaning "son of Velasco". Peruvian swimmer Claudia Velasquez is known by this last name. This is a very famous name.

Kidadl has lots of great names articles to inspire you. If you like our suggestions for Peruvian Last Names then why not take a look at Native American Names, or for something different take a look at Hipster Girls Names.