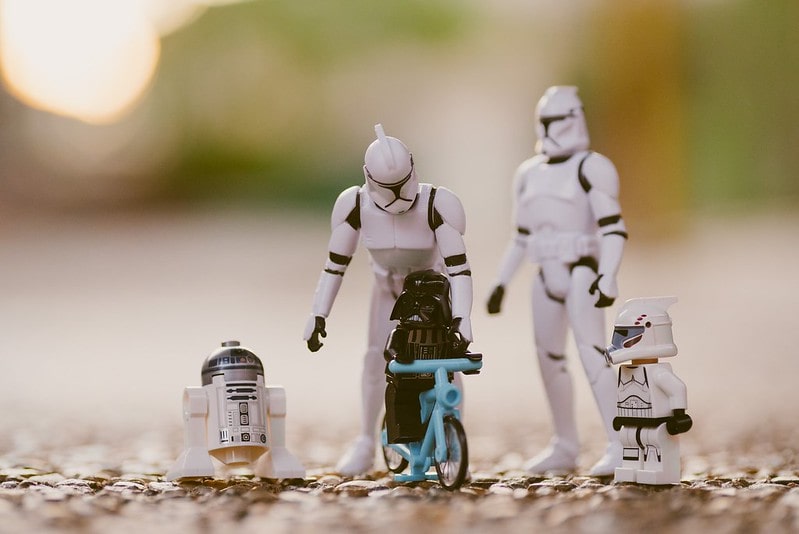 It can be difficult to pick the perfect name from the endless choice of baby names out there.

If you're a fan of the Force take a look at these sci-fi Star Wars baby names for girls. One of these names taken from a galaxy far far away could be the perfect Star Wars inspired name you've been looking to call your new baby girl.

From Jedi Masters to Rebel fighters, these meaningful girl names from Star Wars could suit your young Padawan perfectly. Here's a list of 39 girl Star Wars names for some ideas for names for your new baby girl.

These female Star Wars characters know how to wield a lightsaber but they're also extremely intelligent, kind and funny. Awaken the Force within your child with one of these Jedi character names.

1) Aayla: inspired by the Sanskrit name Ayla, meaning "light" or "born of knowledge". This female character in Star Wars served as a Jedi General in the Clone Wars.

2) Allie: Stass Allie was another Jedi General in the Clone Wars, her name meaning "nobility".

3) Asajj: Asajj Ventress was a powerful Sith during the Clone Wars, her name was inspired by a Japanese interpretation of Lady Macbeth named Asaji from the film "Throne of Blood".

4) Ashoka: she was a Jedi student of Anakin Skywalker during the time of the Clone Wars. Her name has Sanskrit origins and means "without sorrow".

5) Jaina: this character belongs to the Legend series, her name has Hebrew origins deriving from Jane, meaning "God is gracious".

6) Jocasta: she is the Chief Librarian of the precious Jedi archives as well as being a powerful fighter.  Her name has Greek origins and means "shining moon".

7) Luminara: a serious Jedi master, her name has Spanish origins and means "child of the stars".

8) Mara: appearing in multiple Star Wars video games, her name has many meanings in different cultures including "strength", "joy" and "eternally beautiful".

9) Mari: a youngling training to be a Jedi, this name has many meanings across different cultures including "bitter", "from the sea" and "wished-for-child".

10) Nomi: she was another great Jedi master, her name derives from the English Naomi, meaning "my delight".

11) Rey: introduced to us in The Force Awakens, Rey is one of the most powerful Jedi to exist. Her name has Spanish origins and denotes to "King".

12) Tionne: she was one of the first students to learn under Luke Skywalker, her name derives from Tiana which has Latin origins, meaning "princess".

These girl characters from Star Wars did not have the power of the Force, however, they developed other skills and were strong and independent in their own right. Perhaps one of these Star Wars names will be the one to suit your new baby girl.

13) Allara: a youngling who studied the ways of the Jedi during the Clone Wars, her name has an Australian Aboriginal origin, meaning "sunlight".

14) Amidala: the Queen of Naboo, her name has Italian origins meaning "beautiful flower".

15) Amilyn: she was a close friend of Princess Leia as well as being a strong commander for the rebels, her name is of American origin meaning "powerful and complete".

16) Beru: she was Luke Skywalker's aunt, her name has Japanese origins meaning "bell".

17) Carasynthia: a rebel fighter from the Mandalorian, her name comes from the Irish word cara, meaning "friend".

18) Fennec: an elite assassin from the Mandalorian, her name has Arabic origins meaning "fox".

19) Jyn: from the film Rogue One, Jyn Erso was a cunning aid to the Rebels in their fight against the Empire. Her name derives from Jane, meaning "God is gracious".

20) Leia: Princess Leia is one of the original girl bosses of science fiction, her name has Hebrew origins meaning "child of Heaven" or "Heavenly flowers".

21) Lyra: mother of Jyn, her name has Greek origins that mean "lyre", the ancient musical instrument.

23) Padme: the first name of Queen Amidala, it has Persian origins meaning "lotus".

24) Qi'ra: a powerful figure in Solo: A Star Wars Story, her name comes from the Arabic name Qira meaning "orate".

25) Rose: a pilot flying high with the Rebel Alliance, her name refers to the rose flower which symbolises love and beauty.

26) Sabine: a fierce soldier from the animated series Star Wars Rebels, her name has Latin origins meaning "from the Sabine tribe".

27) Shmi: Anakin Skywalker's mother, her name seems to originate from the Hindu Goddess Lakshmi, the goddess of wealth and purity.

These Star Wars inspired baby names come from the actresses that portray these iconic characters on screen. If the previous names were too sci-fi for your taste but you still want your baby's name to have a connection to the franchise, have a look at the list below for some ideas.

28) Carrie: Carrie Fisher is famous for portraying Leia, her name has American origins and means "free".

33) Kiera: Kiera Knightly was 12 years old when she played the decoy Queen Amidala in The Phantom Menace. Her name comes from the Irish name Ciara, meaning "dark haired one".

34) Kelly: Kelly Marie Tran played Rose in The Last Jedi, this name has many meanings but the American origin denotes to "warrior".

36) Lupita: Lupita Nyong'o made her Star Wars cameo as Maz Kanata, her name has Spanish origin and means "from the river of the wolf".