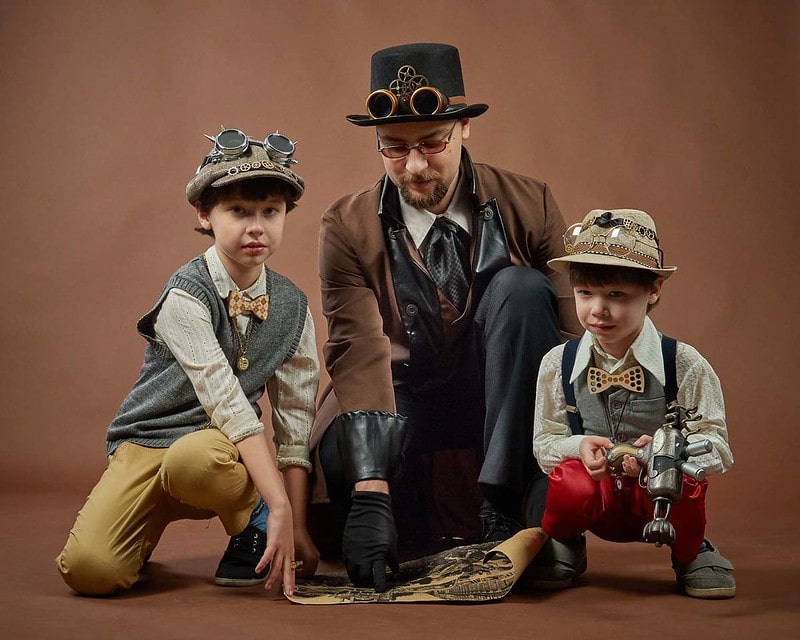 In science fiction, Steampunk is a genre that incorporates retrofuturistic designs and aesthetics based on steam power.

Invented in the late 19th century, Steampunk names have a Victorian touch to them. Most of the names can be found in many steampunk name generator sites.

Male steampunk names come from various origins. Take a look at these:

2. Andan (Fictional origin). Andan Cly from the steampunk book series, 'The Clockwork Century', and is a great option for steampunk names.

4. Charles (Germanic origin) meaning  "free man". Charles Babbage was a computer scientist whose fictional self was the protagonist of the steampunk novel 'The Difference Engine'.

6. Gaspar (Persian origin) meaning "treasurer". In the steampunk movie, 'April and the Extraordinary World', the steampunk character Gaspar Pizoni has one of the perfect names.

11. Lew (English origin) meaning "someone who lived by hills". Lew Basnight is one of the innumerable characters in Thomas Pynchon's steampunk epic 'Against The Day'.

12. Lionel (English origin) meaning "lion". This great steampunk name is associated with the protagonist Lionel Verney in 'The Last Man'.

14. Luca (Latin origin) meaning "light". Luca Zombini was a traveling magician in 'Against The Day'.

15. Miles (Latin origin) meaning "soldier"; from Miles Blundell in 'Against The Day'.

17. Nemo (Latin origin) meaning "nobody'; Captain Nemo in 'The League of Extraordinary Gentlemen'.

18. Pazu (fictional origin). From the Japanese steampunk anime 'Castle In The Sky'.

20. Rao (Indian origin) meaning "king".  A great steampunk name from Rao Ganeshi in 'Against The Day'.

22. Romuska (Fictional origin); from Colonel Romuska Laputa in 'Castle In the Sky'.

23. Sloan (Irish origin) meaning "expedition". A good steampunk name from 'Against The Day'.

24. Stilton (English origin) refers to a particular cheese and is a name in 'Against The Day'.

Steampunk names for females have a Victorian essence to them, see which you like:

30. Dahlia (Scandinavian origin) meaning "dale"; from 'Against The Day'.

31. Edwarda (English origin) meaning "wealthy protector"; from 'Against The Day'. This name is a top result in every Victorian name generator.

32. Erlys (Welsh origin). From Erlys Rideout, a female character in  'Against The Day'.

33. Estrella (Spanish origin) meaning "star".  A name from 'Against The Day'.

37. Lucita (Spanish origin) meaning "light"; the protagonist in  'Castle In The Sky'.

38. Lyra (Latin origin) refers to a constellation; from the central character in 'His Dark Materials'.

39. Maria (Hebrew origin) meaning "bitter"; from a protagonist in 'The Clockwork Century'.

40. Marisa (Latin origin) meaning "of the sea"; a significant name in 'His Dark Materials'.

41. Mayva (Sanskrit origin) meaning "fruit of hard work"; from 'Against The Day.'

42. Umeki (Japanese origin) meaning "plum tree," from a professor in  'Against The Day'.

44. Ruperta (Germanic origin) meaning "famed"; from 'Against The Day'.

49. Wilhelmina (Dutch origin) meaning "willing protector"; from a character in both 'Bram Stoker's Dracula' and 'The League of Extraordinary Gentleman'.

50. Yashmeen (Indian origin) is a flower; from 'Against The Day'.

There are provisions in steampunk for unisex names as well. Have a look at this list of gender-neutral steampunk names:

51. Crobuzon (Fictional origin). A city in "Perdido Street Station" novel and one of the better steampunk city names.

52. Kit (Greek origin) meaning "bearing Christ"; from 'Against The Day'.

58. Mouffette (French origin) referring to the mammal skunk; from "Against The Day'.

59. Okami (Japanese origin) meaning "wolf"; a unisex name from 'Castle In The Sky'.

Kidadl has lots of great baby names articles to inspire you. If you liked our suggestions for Steampunk Names then why not take a look at Timeless 1940s Names, or for something different take a look at Arthurian Names.