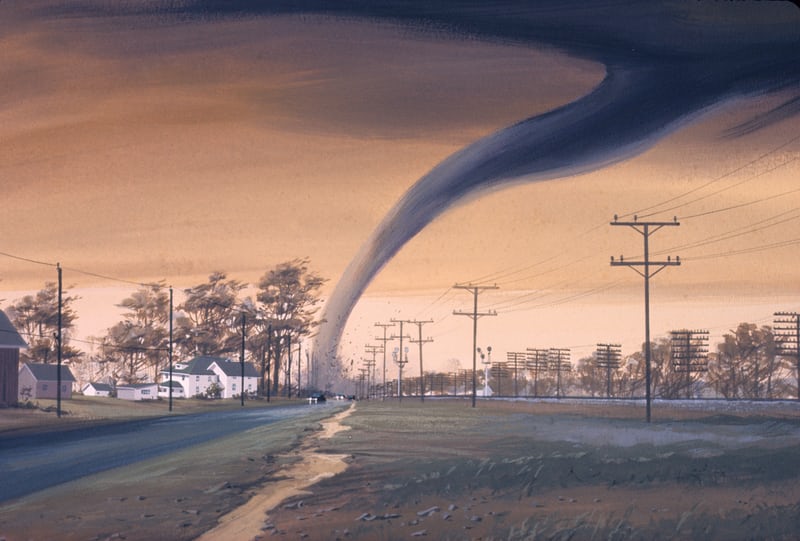 Many movies came up with the genre of tornadoes. However, 'Twister' is considered the ultimate tornado movie in recent times.

More than twenty-four years down the line, it still makes an interesting watch. While many directors tried their hand at this genre, 'Twister' directed by Jan de Bont is appreciated for its cliched execution.  The cinematography, chemistry between lead actors Bill Paxton and Helen Hunt, plot, screenplay, and supporting actors added enough substance to make it a watchable movie. In this article, we bring to you a few amazing 'Twister' quotes that still are familiar with many other storm movies. If you’re looking for more classic quotes, take a look at our articles on '80s movie quotes and for quotes about similar topics, storm quotes.

'Twister'starts with an F5 level tornado that leaves a family devastated. A little girl, Jo, watches her father succumb to the tornado that hits Oklahoma and destroys it. As Jo grows up, she is determined to find a solution to measure the intensity of tornadoes. She along with her husband Bill Harding builds a sensory device that can study what actually happens inside a tornado. First few minutes into the movie 'Twister', Jo Harding is seen fixing her machines. When Dr. Jo Harding says "She's here" the audience presume 'she' is the daughter of Bill and Jo. But surprisingly 'she' is a weather device - Dorothy, that Bill Harding had designed with his years of experience following the tornadoes. In 'Twister' movie, Dorothy carries sensors, which when sucked up into the tornado can give data to the scientists to predict future tornadoes. The entire movie revolves around the lead pair, trying to get their invention into the tornado and test it. Do they really achieve the feat? Are they heading for divorce? What happens to Dorothy? Will they become successful with their invention? All these questions keep the audience hooked to the screens as the plot slowly unfolds.

Here are some of the iconic movie's quotes for you to enjoy.

The movie begins with a family watching the news on their TV.  The newsreader reads the warning that a tornado is going to hit Oklahoma State.

1. "It's coming straight for us! It's already here! Everybody underground now!"

2. "If I know Jo, she's already dragged her entire department into the field."

3. "She forgets everything except her work."

7. "I don't have a problem being a weatherman."

10. "These sensors go up the funnel and radio back information about the internal structure,  wind velocities, flow, asymmetries."

11. "We can learn more in 30 seconds than they have in the past 30 years, get a profile of a tornado for the first time."

12. "If we knew how a tornado really worked, we could design an advance warning system."

13. "Give people a chance to get to safety. At least, that's what these guys are trying to do."

- Bill Harding.  [Trivia: In the movie 'Twister', Jonas Miller is an antagonist played by Cary Elwes.]

20. "Oh, nothing. I was just wondering if we're gonna...chase this tornado, or you just want to catch the next one."

Jo Harding and Bill Harding, while chasing the tornadoes end up at Wakita, where Aunt Meg lives. The entire team loves Aunt Meg Greene and visits her home in Wakita. The iconic food scene from the movie 'Twister' adds some good laughs with funny narrations. Here are a few funny quotes from this scene.

23. "Jo, things go wrong. You can't explain it. You can't predict it. Killing yourself won't bring your dad back. I'm sorry he died, but it was a long time ago. You got to move on."

Aunt Meg Greene: "To spend his life pining for you and die miserable and alone."

26. "So, Jo's yelling at him to get out of the way, right? He just...He strolls up to the twister, and he says, 'Have a drink.' And he chucks the bottle into the twister, and it never hits the ground. Twister caught it and sucked it right up."

In the 'Twister' movie scene in the fields, cows are seen flying due to a severe tornado. This is yet another remarkable picturization in the movie. Here is a conversation snippet from the 'Twister' cow scene.

Bill: "Actually, I think that was the same one."

This is another powerful quote from a scene featuring Melissa, Bill, Jason and others, discussing tornados the characters have previously witnessed.

Wakita falls in the path of the tornado. Everyone from Jo's team is worried about Aunt Meg Greene. Jo and Bill search for her in the partially collapsed home. They find her injured under the debris in the basement. Jo worries about what happened at Wakita, leading to some inspiring moments.

Aunt Meg Greene: "Well, I think you do. You've been...chasing these things since you were a little kid. It's what you do. Go. Do it."

In the final scenes where a level 5 tornado arrives, it gives a final opportunity to put Dorothy in the path of the tornado. In the movie 'Twister', the extreme scene is how Bill and Jo succeed in their mission.

Here at Kidadl, we have carefully created lots of interesting family-friendly quotes for everyone to enjoy! If you liked our suggestions for 20+ Twister Quotes From The Ultimate Tornado Movie, then why not take a look at Steven Spielberg quotes, or 'Gladiator' movie quotes.