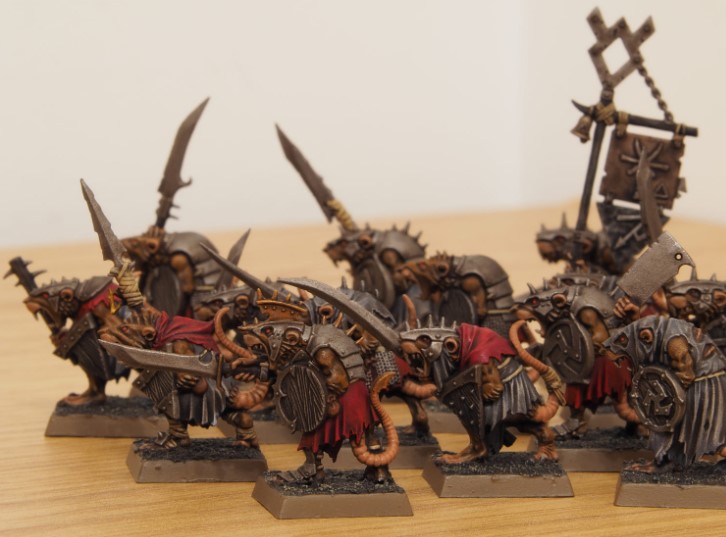 The Skaven faction is a group of cruel humanoid creatures that look like rats. They are the most unstable faction of species in the popular fantasy tabletop game called ‘Warhammer’.

The Skaven are also called Ratmen, or Ratkin, and they are ruled by the horrifically malevolent deity called the Horned Rat. They live in an underground empire called the Under-Empire. Out of all the mortal races, the Skaven is the most treacherous race bent on spreading their corruption to every corner of the ‘Warhammer’ games world. Rat Mothers/Breeders are the only known female Skaven.

A Skaven name may sound harsh and scary. These names are suitable to use for characters that are cruel, vile, and dangerous. From short names like Boneripper to unique names like Queek Headtaker, you will find an ultimate list of Skaven names in this article! Pick the name that suits your character the best.

You may also find more cool World of Warcraft names in Kidadl's articles for void elf names and dwarf names.

Names Of Skaven Assassins For Your Characters

Skaven assassins are capable of eliminating all enemies, they are best assets of any army. Here are some names of the best Skaven lord and assassins that you have to know.

1. Chang Fang - an assassin from the Eshin Triad of deadly assassins, Chang Fang is dangerous and ruthless.

2. Chang Kritch - the third member of the Eshin Triad of assassins.

3. Chang Squik - another member of the Eshin Triad of Assassins.

5. Kreesqueek - an assassin trained in infiltrating cities. This assassin once tried to poison the water supply of a city.

6. Nartik - he assassinated an emperor called Madred Rat Slayer in the year 1152 in ‘Warhammer’.

7. Skrattch Scarpaw - a dangerous assassin from the Clan Eshin, he is also a member of the High Supreme Council.

8. Shiwan Stalkscent - along with Thanquol, it was his duty to decimate the prophet-snake of the Lizardmen.

10. Snikch - belongs to the Clan Eshin and is the best assassin of the clan.

Names of Skaven Warlords For Your Characters

Skaven warlords are powerful forces against the other races of the ‘Warhammer 40k’ World.

Skaven Warlords are large, powerful warriors that command the utmost respect because of their great physical prowess and cruelty. Here is a list of Skaven Warlord names to use for your characters!

12. Gashlik - he is a warlord from the clan called Mors.

13. Gnawdwell - he is a ruler of Clan Mors and also part of the Council of Thirteen. Use this name for a very powerful character.

14. Gritlok - he is a powerful Skaven, a clan lord of a Clan called Gritus while the end times of the ‘Warhammer’ world takes place.

15. Griktrode Boltspear - he is a Lord of the Clan Ektrik while the End Times of the ‘Warhammer’ world takes place.

16. Ibkikk Snatchclaw - a Skaven warlord who is the ruler of the Clan Skab. This is the unique name of a powerful character.

17. Kritch Dwarf-slicer - a harsh name for a harsh character. This Skaven was the leader of Clan Mors in the year 1125 in the ‘Warhammer’ World.

18. Moltskin Searflesh - he was the clan Lord of Volkn during ‘Warhammer’ world End Times. His name is cruel, ghastly, and unforgiving.

19. Rikkt Snapfang - he is the ruler of the Clan Mors.

20. Rikzik Seepage - he was the clan Lord of the Clan Feesik.

21. Staabnash - he is a warlord of the Clan Skab and his name stands for death.

22. Szik Vilepot - this is a suitable name for a vile character, like this Skaven warlord.

23. Vecteek - a cruel Skaven of the Clan Rictus.

24. Viskis - a short name, but a memorable one. This Skaven warlord captured a Dwarf Hold in ‘Warhammer’.

Names of Skaven Grey Seers For Your Characters

Skaven Grey Seers  are the main agents of the ruling Council of Thirteen. If you want to name your character after these powerful seers who occupy powerful positions, here is a list of Skaven Gray Seers.

24. Bokha - a powerful Skaven who led an army against orcs in the ‘Warhammer’ world.

25. Kritislik - he is one of the members of the ruling Council Of Thirteen, a powerful Seerlord.

26. Lurkwoal - a mighty Grey Seer who led an attack against a citadel called Calith.

27. Scrench - a powerful Grey Seer who was the first one to wear Amulet of the Horned Rat.

28. Skabritt - he is a Seer who belongs to the underground city of Under-Altdorf.

29. Skraekual - this Grey Seer accompanied the great Thanquol on a secret mission.

30. Skrittar - a Grey Seer who led an army in the invasion of Sylvania.

31.Sleekit - this Seer was once a master of Thanquol.

32.Squiktat - grey Seer Squiktat was an ambitious pupil of Sleekit.

33. Thanquol - he is the cruelest Grey Seer and one of the best Skaven lords.

34. Thratquee - he is an ancient and powerful leader of the Grand Supreme Council.

35. Thratsnik - this seer was sent on a mission to Festerhole with the Hand of Vecteek.

36. Tisquik - this Grey Seer was a favorite pupil of Sleekit.

The Warlock Engineers of the ‘Warhammer’ world are capable of constructing powerful weapons and devices.

These Skaven are sorcerer-engineers who mix the scientific with the arcane to create the new weapons that are the strongest and most baneful in the world. If you want to name your characters after powerful Skaven capable of destroying the world with their devices, look no further!

37. Ikit Claw - he is the chief Warlock and most able Warlock Engineer.

38. Kaskit Steelgrin - this Warlock Engineer dressed in a long coat of leather, his head partially covered by rods and wires. Long gloves shielded his arms.

39. Quilisk - a warlock Engineer of Clan Skryre and also a member of the Grand Supreme Council.

40. Vermisch - he is an emissary of the Supreme Grand Council.

41. Zingetail - this warlock engineer was in charge of the Warpmoon Project while the End Times of the ‘Warhammer’ world takes place

These are names of Skaven who are quite powerful and influential, these are perfect ideas for new character names.

44. Ghoritch - a n ogre created by Throt, he has the brain of the Khornate Chaos Champion.

45. Goji - a black-fur beast who was a bodyguard to Lustria.

46. Grootose - he is a Great Packmaster in the End Times.

47. Grotchrot - the Beast-Chieftan of the Clan Morbidus in the End Times of the world of ‘Warhammer’.

48. Kong Krakback - a leader of the Clan Eshin.

49. Krasslik - an apprentice Grey Seer who accompanied his master Skrittar during an invasion.

50. Kratch - an apprentice Grey Seer of Skabritt and then Thanquol.

51. Lynsh Blacktail - he is the pirate-slaver captain of the Clan Skurvy.

52. Malkrit - he led an invasion into Troll Country.

53. Manxrott - he is the lord of Hell Pit and a Great Packmaster.

55. Nurglitch - one of the members of the Council Of Thirteen and master of Clan Pestilens.

56. Natty Buboe - this Skaven is a legendary sharpshooter from the Clan Mors.

57. Paskrit - another member of the council of thirteen and a lord of Clan Skryre, who orchestrated the assassination of Nagash.

59. Queek Headtaker - a feared lord in a city called the City of Pillars, he is also the Great Warlord of the clan Mors and right-hand Skaven of a warlord called Gnawdwell.

60. Sneek - a member of the great Council of Thirteen.

61. Shen Tsinge - a great sorcerer sent to destroy the prophet-snake of the Lizardmen. He was sent with Thanquol.

63. Tretch Craventail - a character known for his art of back-stabbing, sneaking, and running away.

64.Tsang Kweek - he is the leader of the Gutter Runners sent to Lustria.

65. Viskit Ironscratch - a member of the council of thirteen and the lord of Clan Skurvy.

66. Visktrin - a leader of Clan Eshin who sent his army to the east of the ‘Warhammer’ world.

Kidadl has lots of great names articles to inspire you. If you liked our suggestions for Skaven names, then why not take a look at dranaei names, or for something different, take a look at blue dragon names.