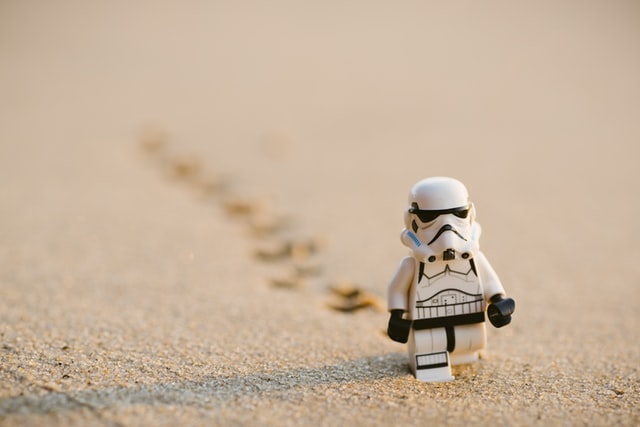 In the 'Star Wars' universe, one of the most powerful and influential communities of beings are the Stormtroopers.

Stormtroopers are essentially space marines or elite shock troops who existed in the Galactic Empire. These stormtroopers are military units of the First Order and are under the powerful leadership of Emperor Palpatine and Stormtrooper commanders, the most important commander being Darth Vader.

Stormtrooper Names From The Original Trilogy

1. Biker Scout, founded on the jungle planet of Endor, this is a hoverbike-mounted Stormtrooper.

2. Cold Weather Assault Stormtroopers, another name for the powerful and skillful Snow troopers.

3. Combat Assault Tank Pilots, use armored repulsorlift vehicles in the Empire’s Army to fight against targets and enemies identified by the First Order.

4. Foot Patrol 7, a Sandtrooper unit led by TD-110 and helped in the notable battle of Secret Mission to Tatooine.

5. Forest Troopers, first seen in the 'Return Of The Jedi', they are skilled in patrolling forest areas.

7. Imperial Sharpshooters, another name for the Scout Troopers.

8. Mine Trooper, specially trained unit for the security of the mines.

10. Sand Trooper, designed specially to work in the hot and dreary desert worlds.

11. Scout Troopers, another name for the famous and deadly Biker Scouts.

13. Space Troopers, operate in zero-gravity conditions and were responsible for patrolling the first Death Star.

14. Stormtrooper Grenadiers, famously known for launching grenades against their enemies.

16. TD-110, a Sandtrooper commander who was a male human officer affiliated to the First Order as well as the Galactic Empire.

18. TD-787, a Sandtrooper who wore a white armor and used a DLT-19 heavy blaster rifle to run direct attacks on its targets.

19. Wanton, the nickname of TD-110 who served the first Death Star before it was blown up to pieces.

Stormtrooper Names From The Prequels

Directed by George Lucas, the 'Star Wars' prequel trilogy was released years after the original trilogy was released in 1977. The movies included in this prequel include 'The Phantom Menace', 'Attacks Of The Clones' and 'Revenge Of The Sith'. Numerous new troopers from the Stormtrooper corps make a first appearance in this trilogy and come with interesting character traits and plot lines. If you are looking for new 'Star Wars' Stormtrooper names, here are all Stormtrooper types that appeared in the prequel trilogy.

21. Bacara, the Colonel Marshall Commander who was one of the most powerful characters in this franchise.

22. Captain Rex, the loyal and no-nonsense Commander of the Rebel Alliance.

23. CC-1138, a nickname given to the Colonel Marshall Commander, Bacara.

25. CC-3636, the birth number of the clone trooper Commander Wolfe.

28. Clone Shock Trooper, they first appeared in the 'Revenge Of The Sith' and were an elite military unit.

29. Clone Troopers, cloned soldiers that make their first appearance in 'Attack Of The Clones'.

30. Commander Cody, one of the most cynical and bitter clone troopers.

31. Commander Gregor, one of the most expert hand-to-hand combatants amongst the clone troopers.

32. Commander Wolfe, one of the most expert marksmen and tacticians amongst the clone troopers.

34. Imperial Shock Troopers, wore heavy armor and machinery and could be distinguished by others using clear red markings on their armor.

35. Ki-Adi-Mundi's Squad, led by Jedi General Ki-Adi-Mundi and notably known for their efforts in the Fourth battle of Mygeeto.

36. Order 66, the special unit of the military that raided the Jedi Temple.

37. Thire, the nickname of the leader of the Imperial Shock troopers CC-4477.

Stormtrooper Names From The Disney Trilogy

38. Electropod Troopers, almost similar to the standard First Order Stormtroopers wearing white armor except for the fact that they come with specially fitted electropods.

39. Finn, the First Order Stormtrooper who is one of the most popular characters from 'Star Wars'.

40. Flame Troopers, belonging to the First Order they specialise in flames and fires.

41. FN-2000, was a First Order Stormtrooper who was trained by Captain Phasma.

43. FN-2187, was the former name of Finn who was an extremely skilled gunner.

44. FN-2199, another human male Stormtrooper who served in the First Order and was a riot control trooper.

46. Heavy Snowtroopers, wear white armor and are skilled in heavy machinery to be operated in snowy environments.

47. Incinerator Troopers, skilled in using flamethrowers against their targets.

53. Sovereign Protectors, the red armored powerful, capable and elite bodyguards of Emperor Palpatine operating on the faraway planet of Exegol.

54. Stormtrooper Executioners, first appeared in 'The Last Jedi' and are equipped with BL-155 Laser axes to execute Stormtroopers who are found guilty of treason.

55. Toasters, a commonly used term which refers to the Flame troopers because of their ability and skills in utilizing fire to target enemies.

56. Treadspeeder Drivers, use 125-Z tread speeder bikes and immensely light armor to ride at lightning fast speeds when in pursuit of their targets.

59. 21st Nova Corps, one of the most powerful military units in this franchise known for being relentless during combat attacks.

66. Death Troopers, made their first appearance in 'Rogue One: A Star Wars Story'.

70. DT-F16's Squad, which notably fought in the Mission to Faos Station.

71. Galactic Marines, another name given to the all-powerful 21st Nova Corps.

72. Gideon’s Guard, another Death trooper guard unit which fought in the Skirmish on Nevarro.

74. Heavy Shore Troopers, a specialized unit of coastal military defenders skilled in the use of heavy ordnance.

76. Jump Trooper, known for their ability to fly at top speeds due to their jetpacks.

80. Mortar Stormtrooper, famously known for their skills in mortar weaponry.

83. Raiders, these skilled and specialized troopers affiliated to the First Order were headed by their leader, Kylo Ren, and are especially capable of hunting.

84. Range Troopers, they first appeared in 'Solo: A Star Wars Story' and had heavy armor with fur.

86. SCUBA Troopers, they are skilled in operating and fighting enemies underwater using special apparatus such as flippers, underwater blasters and breathing equipment.

87. Sea Troopers, wore white armor and were most dreaded because of their abilities in fully submerged aquatic assault.

88. Shadow Stormtroopers, made their first appearance in the comic strip 'Gambler’s World' and were specialized Imperial Stormtroopers.

89. Shoretroopers, another name for the Coastal Defender Troopers.

91. Sith Trooper Officers, powerful commanders of the Sith Jet troopers who use advanced sensor technology to identify and fight their enemies.

92. Special Commando Advanced Recon Troopers, have some of the most unique and characteristic equipment as well as armor design and are operated for very special high risk missions.

93. Swamptrooper, Han Solo was this kind of trooper when he served the Empire.

94. Tarkin’s Guard, was affiliated to the Galactic Empire.

95. Task Force 99, an elite squad run by Sergeant Kreel most famously known for their Skirmish on the Ghost Moon.

96. Terror Trooper, a specialized and elite class of experimental Stormtroopers.

97. Thrawn’s Guard, made up of at least six Death troopers and led by Grand Admiral Thrawn.

Kidadl has lots of great names articles to inspire you. If you liked our suggestions for Stormtrooper names and Stormtrooper types from 'Star Wars', then why not take a look at something different like this complete list of 'Star Wars' bounty hunters, or these Romulan names from the Extended 'Star Wars' Universe and ideas for new names.