When Do Babies Say Mama & Dada? Do They Know What It Means? 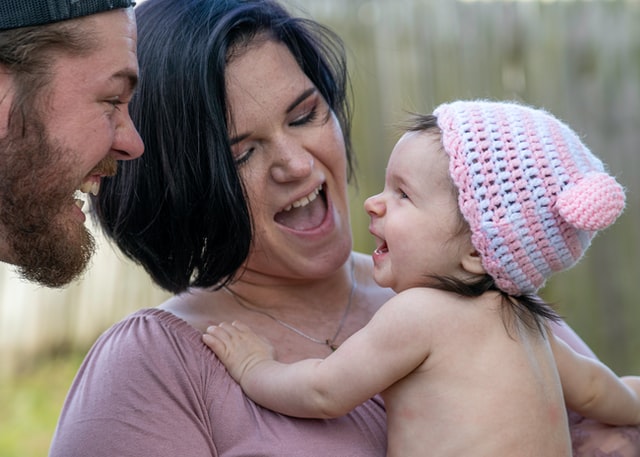 Did they just say, mama?!

You might be wondering excitedly if you just caught your baby saying a word or impatiently wondering when they will. Although you may be nervously awaiting your child's first word, it's important to note their communication begins long before and have a rough idea of when you can expect to hear it.

Listening out for your little one's first word is undoubtedly an exciting time for any parent or caregiver, and when you do hear it and know they mean it, you can bet it's a magical moment. So, let's take a look at when you can expect to hear those meaningful baby utterances and their language development right here.

If you're interested in other topics about your babies' communication, find out when babies smile or what to do if you have a 20-month-old not talking here too.

When Do Babies Start Talking?

Right from the get-go, you'll notice your little one has their way of communicating with you, this might be hungry cries or a tired cry, and even from birth, you'll soon start to pick up the difference.

It's unlikely your baby will say a word after their first early vocalizations, but this raises the important question, when can you expect to hear their first word?

First things first, it's essential to clarify what is actually a word.  At approximately 6 months, babies begin babbling and playing around with language and you may see lots of development in their noises. During this time, they learn a super fun new instrument, their vocal cords, and begin to understand more and more of what you are saying. This means they understand, although they still can't speak yet. However, although sometimes these vocalizations may sound like words, at this stage, they are too young to be classified as using a word.

By around 9 months, these babbling noises may begin to change. They might start to add new sounds, like "babadadama". They are now at the stage where they understand more of what you are saying and even their own name, though they still have not developed the complete motor skills and coordination required for speech.

At around 12 months, you can expect to hear your baby's first words. For some children, it may be earlier, and for others, it may come a little later than their first year of life. Common early words your baby will start saying include "mama" or "dada", "bye-bye", "milk", "juice" or "doggy". They may not say the word clearly within their first year of life, and don't worry about that. Between this month and 18 months, they may call many things by the same word, and a ball could be many things! They will always be watching and imitating you, so it's a good idea they can see your mouth clearly to support their development.

At around 18 months old, they will continuously add to their speech and language skills as around this time, a vocabulary explosion occurs. By about 24 months, they may begin joining words together. By now, many of their words will be much clearer. However, this continues to iron itself out over the next few years. If you notice a particular early speech sound is persistently difficult (some sounds are expected before others), or your child grimacing to say words you can speak to a medical professional.

Why Do Babies Say Mama Or Dada First?

Linguists have been torn over the rationale for the mama or dada first debate for years. Research from Tardif and colleagues analyzed 900 babies aged 8 months to 16,  from a mixture of Cantonese, English, and Mandarin-speaking homes. They identified that "dada" was the most frequent first-person identified. "Mama" scored not far behind.

For many mothers, this can be upsetting when they hear "dada" first instead of hearing their baby say "mama". One theory for this is that mothers are the primary attachment to the child, and so the baby sees them as one. In many cases, the first person they see different from that bond with their mother is their dad. On top of this, don't be alarmed if you hear your baby say "mama" before "dada" because ultimately, it is just an extension of a sound they prefer playing with, and they may have more of a preference for an "m" sound. Equally, do not worry if they do not say "mama" or "dada" first at all, and it's an entirely different word. Babies can be very surprising!

Both saying "mama" and "dada" are known as babble strings; these are sounds your baby puts together when babbling, such as "bababa" or "gagaga".  Often, babies start to babble in repetitive syllables, and as they transition to words, you guessed it, "mama" and "dada" fit that mold very well! In some cases, you hear could "mama" and "dada" as early as 7 months; however, it may not carry any intention or be meaningful. Your baby may say "mama" and "dada" to everyone. Around the 12 months mark, you can expect to hear this word in context, and when they look at you and say the word, it's genuinely a heartwarming moment. It's at this age that it counts as your baby's first words, when the word is meaningful.

When Should I Worry If My Child Isn't Talking?

It's essential for all parents to consider the broader picture of their child here, and that's the entire picture of your baby's entire communication. Understanding words and your baby's social skills are also important building blocks for them to acquire language skills. There's also a whole area of speech and language development called pre-verbal skills, which are the non-verbal aspects of language. Pre-verbal skills are the foundations that pave the way for successful speech and language skills. Such skills include attention, listening, developing cause and effect, turn-taking, and imitation.

If your little one isn't using any intentional words by 12-15 months, you should speak to your doctor.  Many doctors expect baby language by this age range, and if not, your doctor may refer you for a hearing test or an appointment with a speech and language pathologist.

A speech pathologist will assess your child's communication skills. They will understand if there is a speech delay and look into developing your baby's language and pre-verbal skills with you. Try your best to reduce asking your baby questions and pressure them to speak, with phrasessuch as "what's that?". Instead, focus on the repetition of your words, particularly action words with your baby. Many parents think names, colors, numbers, and animals are essential for baby talk, but this is a common misconception. These words do not serve a purpose for functional communication compared to words such as "stop", "go", "more" and "finish" at this development stage. Don't worry, academic skills and other areas of vocabulary will come much later for your child.

If you found this article helpful, then why not take a look at our guide to the 12 month sleep regression or why your [14-month-old might not be walking]?