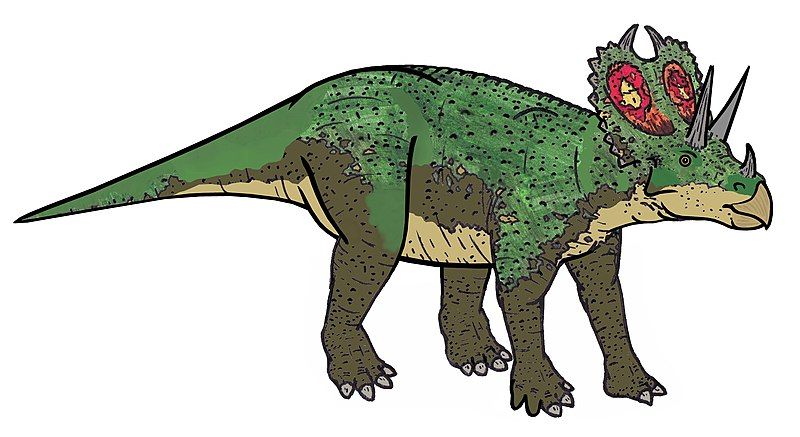 Ajugaceratops, originally named Chasmosaurus mariscalensis, were herbivore dinosaurs from the Campanian stage in the Late Cretaceous period of the Mesozoic era and they lived on earth 66 million years ago. The first fossils of this species were collected in Texas, North America by William Strain. The holotype included partial adult skulls, horncore, left maxilla, and a right dentary. More fossils were recovered later from the Aguja Formation range in Brewster County. In 2006, Lucas, Sullivan, and Hunt named the new genus Agujaceratops. Their skull had long brow horns and short-sized nose horns, and a stretched frill surrounded small horns. They had similar characteristics to the Chasmosaurus.

If you want to learn about more amazing and interesting pre-historic creatures, read our articles on the Sinornithomimus and Syntarsus here at Kidadl!

How do you pronounce 'Agujaceratops'?

To pronounce the word 'Agujaceratops', the phonetic must be 'A-gu-ha-seh-rah-tops', breaking the big word into six small words.

What type of dinosaur was an Agujaceratops?

The Agujacertops was a long frilled ceratopsian dinosaur recovered from the Aguja Formation. There are two species of this genus known as A. mariscalensis and A. mavericus. They have related characteristics with the Pentaceratops and Chasmosaurus. As ceratopsian dinosaurs were included in the group of sauropods, the Agujaceratops was also a sauropod.

In which geological period did the Agujaceratops roam the Earth?

The Agujaceratops was a horn-faced dinosaur that lived in the Campanian stage of the Late Cretaceous period, between about 83-70 million years ago.

When did the Agujaceratops become extinct?

The Agujaceratops become extinct at the end of the Late Cretaceous period, approximately 66 million years ago. Geological evidence indicates that a large celestial object had a collision on the Earth's surface due to which there was worldwide change in the ecosystem causing natural calamities, wiping the era of dinosaurs from the Earth.

Where did an Agujaceratops live?

In 1938, the discovery of the first fossils of a ceratopsian dinosaur was collected from Big Bend National Park in Texas by William Strain. Later more partial skeleton was discovered from the lower part of the Upper Shale member of the Aguja Formation, which was 70 million years old. The Aguja Formation is located in parts of Tornillo Group of North America and partly lies in Texas in the United States. From these pieces of evidence, the Agujaceratops lived near the coastal areas of the Western Interior Seaway in North America during the Cretaceous.

What was an Agujaceratops's habitat?

The Agujaceratops fossil holotype was discovered in an area of Cretaceous swamp dating to the Campanian stage. Some reports state that their habitat included swamp and terrestrial grasslands. They are not predatory dinosaurs as it is obvious that their characteristics show that they were plant-eaters.

Who did an Agujaceratops live with?

The Agujaceratops lived with their co-species like Chasmosaurus, Pentaceratops, Judiceratops, Vagaceratops, Edmontonia, Kritosaurus, Kosmoceratops, Terminocavus, and many other dinosaurs of another genus. They were peaceful in nature and non-predatory dinosaurs, cohabiting with various other new genera in the terrestrial grasslands.

How long did an Agujaceratops live?

There is no clear evidence of how long the genus of A. mariscalensis lived. The species faced extinction, at the end of the Late Cretaceous period almost 66 million years ago.

Although, there is not much knowledge about the reproduction of a horned dinosaur. Like other species of Dinosauria clade, for Agujaceratops mariscalensis, once the mating was done, the females laid their eggs in cup-shaped nests or mudded burrows. They nested both in ancient upland or low grounds of the formation depositional habitat. There was no report about the count of the eggs or the process of mating and incubation period of the eggs.

The species, Agujaceratops mavericus, was known for its large horned face. They had long brow horns and short sized nose horns, and a stretched frill surrounded by small hornlets in a circular manner. The facial look is similar to that of other Ceratopsidae dinosaurs like the Penteceratops and Chasmosaurus. The backside of the frill had a strong notch that looked like the shape of a heart with three to four pairs of spiked hornlets, similar to the Chasmosaurus. Their blow horns were projected up and out and had a curvy look like a big bend inside view. The genus Agujaceratops mariscalensis had shorter brow horns and also a shorter frill compared to the genus A. mavericus.

Due to the lack of fossil remains of this new genus of horned face dinosaurs, there is not a lot of information about their body structure. They had an expanded head and skull projecting horns. The beak was pointed and their jaws were elongated. They had a dental battery of hundreds of teeth, helping in grinding the vegetation they ate and their teeth shed throughout their life. The body was shaped as quadrupedal as its forelimbs and hind limbs were almost similar in size. The overall build was heavy and strong and had a medium-sized and strong tail.

How many bones did an Agujaceratops have?

There were Agujaceratops skull fossils discovered in Texas. The holotype found had partial bones of the skull including the temporal and partial remains horns. Although, the number of bones they had is not recorded yet.

Ceratopsian dinosaurs are known as intelligent species and some scientists believe that this genus of dinosaurs engaged in dialogue. They used grunts and hoots, also cracking sounds and clapping their jaws to communicate among the co-species.

How big was an Agujaceratops?

The estimated size of the Agujaceratops is 20 ft (6 m). They were slightly bigger in size than Chasmosaurus and were similar to Pentaceratops.

How fast could an Agujaceratops move?

The genus of Agutaceratops were heavy ceratopsian dinosaurs and it is believed they had slow ground movement. They also browsed for food mostly on the ground and moved slowly.

How much did an Agujaceratops weigh?

The Agujaceratops dinosaur species had a heavy bodyweight. Their average weight was estimated to be 4000 lb (1814 kg). This genus weighed almost two times less than the Asian elephant and was similar to that of Indian rhinoceros.

There is no name assigned to the male and female dinosaurs of this species in the genus A. mariscalensis and A. marvericus.

What would you call a baby Agujaceratops?

A baby of a dinosaurs from the species Agujaceratops mavericus is called a hatchling after being hatched from its egg. This is similar to modern-day reptiles like crocodiles and turtles.

The horned face Agujaceratops was an herbivore and plant-eater. They mostly browsed on vegetation near the ground. Some paleontologists state that they used the same movement of jaws over and over again and their diet mostly included leaves and lacked heavy items like twigs and branches. The special shape of their beak helped for browsing habits and also cropping grasses. They adapted to digest high-fiber plant material because they had advanced dentition.

Agujaceratops dinosaurs were herbivores and a non-predatory species. They were peaceful in nature and had a diet only on vegetation and did not hunt for meat. We can conclude that they were not aggressive. When in danger, they might have used their brow horns to defend themselves from other predatory dinosaurs.

Many scientists believe that the large skull of Agujaceratops can be multi-folded, that is, they were able to fold or unfold their frills according to the situation. They displayed it to present courtship.

Some reports state that ceratopsian dinosaurs were generally limited to eat on vegetation at, or below, the level of 3.2 ft (1 m).

The name 'Agujaceratops' means 'horned face from Aguja'. After the discovery of the first fossil remains of this species in Big Bend National Park, Texas, in 1989, it was named Chasmosaurus mariscalensis by Lehman. Later in 2006, Spencer G. Lucas, Sullivan, and Hunt named the genus Agujaceratops.

Agujaceratops (Chasmosaurus mariscalensis) were terrestrial dinosaurs like Chasmosaurus. The species was endemic as they restricted themselves to the swamps and grasslands.

Here at Kidadl, we have carefully created lots of interesting family-friendly dinosaur facts for everyone to discover! Learn more about some other creatures from our Aliwalia facts or Eodromaeus interesting facts for kids.

You can even occupy yourself at home by coloring in one of our free printable Agujaceratops coloring pages.