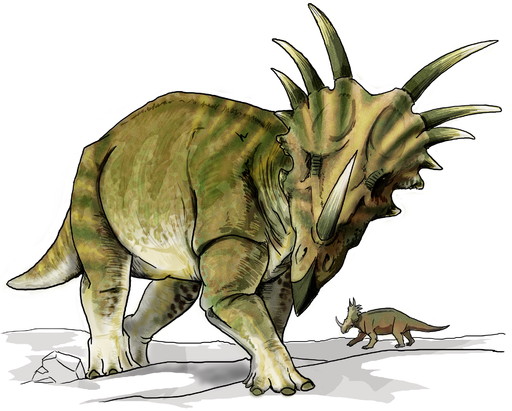 Laevisuchus was a small carnivorous dinosaur of India during the Late Cretaceous period. The remains were found in India, which included a dorsal vertebra and three cervical vertebrae.

This species was named by Huene and Matley, and the generic name means 'light crocodile'. Initially, this animal was classified as a coelurid based on vertebrae studies, but later, based on the placement of neural spines, it was included under noasaurids.

How do you pronounce 'Laevisuchus'?

The pronunciation of the 'Lae-vi-suc-hus'.

What type of dinosaur was a Laevisuchus?

Studies on the fossils show that these dinosaurs were initially classified as coelurid but later were proved to resemble noasaurids.

In which geological period did the Laevisuchus roam the Earth?

Based on fossils studies, these dinosaurs are known to roam the Earth during the Late Cretaceous periods that are around 66-100.5 million years ago.

When did the Laevisuchus become extinct?

Based on the evidence of fossils, these Cretaceous dinosaurs roamed the Earth until the end of the Late Cretaceous period that is around 66 million years ago.

Fossils of a dorsal vertebra and three cervical vertebrae were discovered in the Maastrichtian deposits in the Lameta Formation in Jabalpur, India.

What was the Laevisuchus' habitat?

These cretaceous Saurischia dinosaurs were carnivorous, so it is assumed that they used to live in forest plains, especially nearby rivers, and lakes.

Who did the Laevisuchus live with?

Data regarding who Laevisuchus lived with is not available.

How long did a Laevisuchus live?

No evidence has been found stating their complete life span.

This cretaceous Saurischia dinosaur was oviparous, so they reproduced by laying eggs.

It is considered to be of the same family and class of that as Masiakasaurus, so they were small with two hind legs used for standing and running, two forearms, a small head, and a tail.

How many bones did a Laevisuchus have?

No complete remains were found of this species, so the number of bones is unknown.

The communicative methods of these reptiles are unknown, but dinosaurs, on the whole, used symbolic calls, hoots, hollers, and cracking sounds to communicate.

How big was the Laevisuchus?

Based on the remains, this animal was around 6.6 ft (2 m) in length and 3 ft (0.9 m) in height. However, they were much smaller than the Jaxartosaurus.

How fast could a Laevisuchus move?

The remains show that Laevisuchus were theropod dinosaurs who could swim well. However, their speeds are not determined.

How much did a Laevisuchus weigh?

No particular name has been assigned for the males and females of the species.

What would you call a baby Laevisuchus?

No particular name has been assigned for a baby Laevisuchus.

There is no data related to their behavioral pattern, but these were carnivorous Cretaceous dinosaurs, and they must have been aggressive enough to catch their prey.

Only one fossil was ever found of this species in India in 1933.