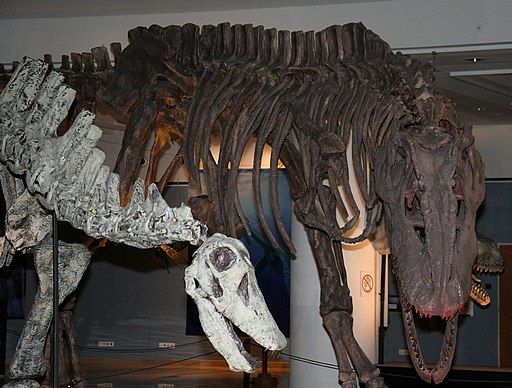 The Limaysaurus genus is based on a singly type species known as the Limaysaurus tessonei, and it was originally directed to the Rebbachisaurus genus by paleontologists Leonardo Salgado and Calvo Jorge in 1995.

The genus Limaysaurus was described in 2004 by Juan Cocca, Alberto Garrido, Salgado, and Sergio Cocca and the general name of the species is taken from the Rio Limay region. During the discovery period of the Limaysaurus, many fossils have been excavated from various regions by famous Argentinian paleontologists like José Bonaparte who discovered various South American Dinosaurs on the continent.

In the period between 1995-2002, there were additional fragments found that were associated with the Limaysaurus, and most of these discoveries came from the Lohan Cura Formation in the south-central region of the Neuquén Province, northwestern Patagonia, Argentina.

These dinosaurs were originally assigned to the Rebbachisauridae family, which is a basal clade inside the Diplodocimorpha clade of dinosaurs.

How do you pronounce 'Limaysaurus'?

Limaysaurus or the Rio Limay Lizard was co-described by Argentinian paleontologists Calvo Jorge and Leonardo Salgado.

The name of this creature is pronounced as 'Lih-may-sore-us'.

What type of dinosaur was a Limaysaurus?

The Limaysaurus has been classified as a Sauropoda and is a member of the herbivorous dinosaur species that were massive in size!

In which geological period did the Limaysaurus roam the earth?

These medium-sized Sauropod dinosaurs are believed to have lived during the late cretaceous period of the Earth and their first appearance on Earth is dated between 101-94 million years ago.

When did the Limaysaurus become extinct?

The Limaysaurus is believed to have become extinct during the late cretaceous period around 99.6-89.8 million years ago.

Where did a Limaysaurus live?

Limaysaurus are thought to have existed in South America, mainly in Argentina. These dinosaurs as other Sauropod species are believed to have lived in small or large groups depending on the availability of food in the region.

What was a Limaysaurus's habitat?

According to paleontologists, Limaysaurus lived in areas with large and swallow lagoons that characterized the presence of other dinosaurs in a shared region. The climate during this time period is believed to have been humid and mild, both conditions which are believed to be suited to the habitat needs of these dinosaurs.

Who did a Limaysaurus live with?

The studies of the Limaysaurus fossils have found traces of gastroliths that were useful in the grinding of food in the stomach of these dinosaurs. Limaysaurus shared their habitats with other Sauropods like the Gigantosaurus and Andesaurus and other members of the Rebbachisauridae family.

How long did a Limaysaurus live?

The lifespan of this dinosaur species is a complete mystery as no evidence has been found that could help in pinpointing the real or estimated lifespan.

There is not enough information regarding the reproductive process of the Limaysaurus. Because of this lack of information, facts about this dinosaur's sexual maturity age, clutch size, mating habits, or mating season cannot be stated.

The Limay Lizard or Limaysaurus has been described as a medium-sized Sauropod and the estimated body length is around 49.2 ft (15 m)! These dinosaurs had long neural spines on their back, and the spines were I-shaped instead of the commonly found V-shaped dorsal and cervical vertebrae. These dinosaurs had curved teeth, unlike other Sauropod species who had pencil-shaped teeth.

Another distinction of this Sauropod is its link with the Rebbachisauridae family that existed in modern-day Morocco. This link confirms the presence of a land bridge that connected Africa and South America 100 million years ago!

How many bones did a Limaysaurus have?

The partial skeleton, named MUCPv-205 was found by Lieto Franciso Tessone in 1988, after whom the name of the dinosaur is based. Another specimen, a fragmentary skeleton, named the MUCPv-206 was discovered by José Bonaparte and these two specimens are dated around the early Cenomanian period. Another smaller specimen, named MUCPv-153 was discovered in the nearby region and is believed to belong to the Huincul Formation.

Elements from parts of the discovered skeleton also consist of an incomplete fibula, coracoid, femora, ischium, a tibia fragment, humerus, a haemal arch, a tooth, ilium, and partial caudal, sacral and dorsal. Most of these findings belong to the regions of The Lohan Cura and Neuquén Province, Argentina.

The communication of this species is unknown as of now. However, paleontologists guess that visual and audio communication was common among these Rebbachisauridae family members.

How big was a Limaysaurus?

The Limaysaurus is considered to follow the same body structure as other members of the Sauropod clade, meaning it was massive in size! Based on studies, paleontologists estimate the size of this dinosaur to be around 49.2 ft (15 m) in length!

How fast could a Limaysaurus move?

The movement speed of the Limaysaurus is based on the information already known about the Sauropoda clade, meaning the Limaysaurus, too, was a slow-moving dinosaur because of its massive size and resembled other Sauropod species like the Alamosaurus, Brachiosaurus, and the Diplodocus.

How much did a Limaysaurus weigh?

Through various researches, the bodyweight of the Limaysaurus is estimated to be around 7.7 T (7 ton)!

What would you call a baby Limaysaurus?

The Limaysaurus has not been studied extensively enough to define the characteristics of juvenile dinosaurs because of which they have not been given any specific name and are known simply as baby Limaysaurus.

Limaysaurus or Limay Lizard, as they are also known, are under the Sauropoda clade, making them a docile genus. These dinosaurs were sometimes left alone by predators because of their massive size, but in the case of a confrontation, the Limaysaurus would use its massive body to thwart enemies.

In the case of a confrontation between Limaysaurus is it believed that these dinosaurs used their long necks to fight each other.

Does the Limaysaurus have single species?

Based on research on this Sauropod dinosaur it is believed that the Limaysaurus genus is described as a single rebbachisaurid Sauropod dinosaurs species that existed around 99.6-97 million years ago in the mid-cretaceous period in the Neuquén Province, northwestern Patagonia, Argentina.

Was the Limaysaurus endemic to Argentina?

The Limaysaurus is believed to be a Sauropod dinosaur that was endemic to Argentina. Many fossils of these dinosaurs have been found in Neuquén, Argentina.

The remains of the genus Limaysaurus were found 9.3 mi (15 km) southwest in the Neuquén Province, northwestern Patagonia, Argentina. The sediments where the fossils were found belong to the Lohan Cura Formation's Rio Limay subgroup, and the estimated period of this dinosaur was estimated to come from the early cretaceous period.