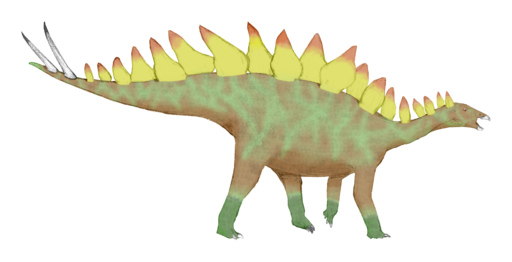 Oplosaurus and its type species Oplosaurus armatus has been the subject of intense research, more than 150 years of it being discovered. With their name translating to 'armed/weapon lizard', only one tooth evidence has been found of this species.

How do you pronounce 'Oplosaurus'?

The easiest way to pronounce Oplosaurus is to break it into 'Op-low-sau-rus'.

What type of dinosaur was an Oplosaurus?

Even though the classification regarding this genus remains unclear, it is thought to be a Sauropod dinosaur.

In which geological period did the Oplosaurus roam the Earth?

The Oplosaurus or the 'armed or weapon lizard' used to live during the Barremian stage of the Early Cretaceous period, which was around 124-129 million years ago.

When did the Oplosaurus become extinct?

It is not known when the Oplosaurus went extinct.

The only evidence of Oplosaurus and the type species Oplosaurus armatus is a tooth found in 1852 in the Wessex Formation of Isle of Wight, Great Britain.

What was the Oplosaurus' habitat?

While only one tooth has been found of this 'armed/weapon lizard', unlike many other fossil vertebrates, these dinosaurs were thought to have been terrestrial.

Who did the Oplosaurus live with?

It isn't easy to assume whether the Oplosaurus was a social creature or not.

How long did an Oplosaurus live?

Due to the discovery of just one tooth, we do not know how long the armed or weapon lizard lived.

Like other dinosaurs, they would have probably reproduced by laying eggs.

There is not enough evidence to understand how the Oplosaurus looked.

How many bones did an Oplosaurus have?

As a result of just one holotype tooth, we cannot estimate the total number of bones in an Oplosaurus.

These dinosaurs probably communicated via sounds and gestures.

How big was the Oplosaurus?

Although we do not have sufficient evidence to understand the Oplosaurus, some researchers have speculated that it was around 72-82 ft (22-25 m) in length. This would make them bigger than other Saurischian dinosaurs, like the Brachiosaurus of the Late Jurassic period.

How fast could an Oplosaurus move?

We do not know how fast this species was.

How much did an Oplosaurus weigh?

It is impossible to deduce the weight of a creature from just one tooth.

As usual, there are no distinct female or male names for the Oplosaurus.

What would you call a baby Oplosaurus?

A juvenile or hatchling is what you would call a baby Oplosaurus.

Assumed to be carnivores due to their sharp tooth, this species was probably aggressive and would bite on provocation.

Sometimes, the Oplosaurus genus is also referred to as Pelorosaurus.