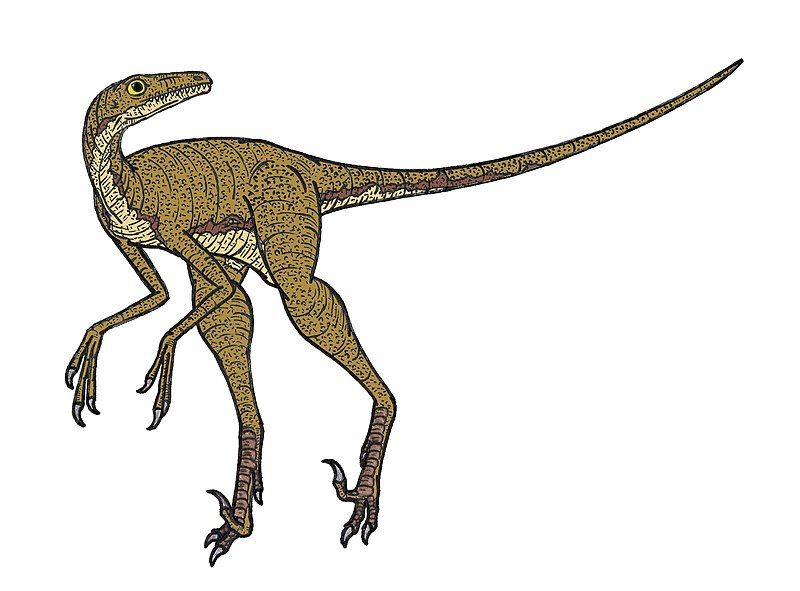 A million years ago, dinosaurs of all sizes lived on earth. Some of them were really large while some were as small as a hen. One such dinosaur from the early Cretaceous period is the Sinovenator. The Sinovenator is a very small Troodontid dinosaur, that was as small as a chicken in size. These dinosaurs are also famously called the Chinese hunter, due to their exceptional hunting skills. This Troodontidae used to live in China. Two Sinovenator skeletons were collected from the older portion of the Yixian formation in China. They are close relatives of the Troodon and have various names such as the Theropoda, the Avetheropod, the Troodontidae, and the Coelurosauria.

Many scientists such as Norell believe that this species of early basal Troodontid share close similarities with birds we see today. This theropod is also known as the close cousin of birds of today's age. According to research conducted in the year 2002, some information regarding the Sinovenator having wings also came into discussion. Based on recent research, this species may have had wings. Two specimens of this Troodontidae were only introduced in the year 2002 by the Institute of Vertebrate Paleontology, where a partial skull and a Sinovenator fossil was examined. To learn more about such interesting creatures from new species to old ones, make sure to check out our articles on the Tupuxuara and the Xenotarsosaurus.

How do you pronounce 'Sinovenator'?

What type of dinosaur was a Sinovenator?

The Sinovenator is a Troodontid. These dinosaurs are a group of small bird-like dinosaurs. Their three-dimensional fossils are still preserved in the lab to use for studies later on. There are collectively three specimens found of this genus and all of them are in a collection at the IVPP in Beijing.

In which geological period did the Sinovenator roam the earth?

These dinosaurs lived around 120-140 million years ago. They must have started coming into existence during the Barremian time and lived until the top of the early Cretaceous period. They are known to be excellent hunters and left their mark when it comes to moving fast and running from predators.

When did the Sinovenator become extinct?

A million years ago, at least one-third of the world was occupied by dinosaurs and we use that information in the current day to study those ages better. However, the dinosaur period came to an end due to the asteroid collision, after which earth became an inhabitable place and no living species could survive in such a hot climate.

Where did a Sinovenator live?

The Sinovenator habitat is assumed to be Asia. These dinosaurs lived all across Asia and their remains along with the Sinovenator skull has been found in places like China. The lower portion of the Yixian formation in China and Jehol Biota areas used by this Troodontid, according to 2002 research.

What was a Sinovenator's habitat?

The Sinovenator was known to live in grass plains and tundras.

Who did a Sinovenator live with?

Around a million years ago, the Sinovenator walked on this Earth and may have lived with another dinosaur which was similar in size. This family of dinosaurs shares very close relations with the Availae based on their features and common descent. It can be said that this genus lived with early bird species from the Cretaceous period. The ostrich and the pelican share close relations with these birds from Cretaceous times.

How long did a Sinovenator live?

As per 2002 research by Norell, one can see that the basal position and size point towards the information that the Sinovenator lived a pretty long life. A lifespan close to one of the similar genus groups may be taken into comparison, meaning the Sinovenator must have lived for 10-20 years.

Information gathered after studying their skull and other remains reveal that they had keen senses and were some of the highest non-avian species. The use of high senses is important when it comes to saving them from predators. The breeding behavior was the same as that of modern-day reptiles. They would lay two eggs and safeguard them from larger dinosaurs.

Their front dentary teeth were closely packed as revealed by Norell. A few of their features were very similar to birds that we see around us, such as their ischium, which was small and birdlike. Their shinbone was very unique and was a little wide at the top and their third metatarsal was small and pinched towards the top. A lot of basal characteristics can be noticed and found when we look close enough. Although their partial skull does not reveal much, the lack of bulla points towards the fact this Chinese hunter shares striking features with Avialae and Dromaeosaurids of that period.

How many bones did a Sinovenator have?

Remains collected of this Troodontidae cannot provide full information about the overall bone structure they had. All specimens found have partial remains of the animal and thus it's not possible to count the entire number of bones this Chinese vertebra might have had. The frontal bone, the shinbone, and lacrimal bones are under close study.

During the Cretaceous time, most dinosaurs effectively communicated through vocals and visuals.

How big was a Sinovenator?

It was almost equal in size to a prairie chicken and a little bigger than a leghorn chicken so this dinosaur was fairly small.

How fast could a Sinovenator move?

They moved very fast and made good use of their leg muscles.

How much did a Sinovenator weigh?

Both genders are addressed with the use of a similar binomial name.

What would you call a baby Sinovenator?

A baby dinosaur is either a nestling or a hatchling.

The diet of this dinosaur according to all the information collected is carnivorous. During the early Cretaceous time, it easily hunted smaller prey for use as food.

As explained by Norell upon a close study of two specimens collected, this dinosaur was not very aggressive. Nonetheless, it can be said that a Sinovenator is very intelligent and alert all the time.

How did the Sinovenator get its name?

Many geologists took use of the information that came out of Sinovenator studies. This theropod was named by Xu, Norell, Wang, and Wu in the year 2002. The meaning of its name is hunter, and it's derived from Latin. The generic name comes from Latin, that is Sinae, whereas Venator means 'hunter'.

What's unique about the Sinovenator?

These dinosaurs were excellent hunters because they were very advanced in their behavior and possessed few of the highest non-avian quotients.

Here at Kidadl, we have carefully created lots of interesting family-friendly dinosaur facts for everyone to discover! Learn more about some other creatures from our Barosaurus facts and Appalachiosaurus facts pages.

You can even occupy yourself at home by coloring in one of our free printable Sinovenator dinosaur coloring pages.