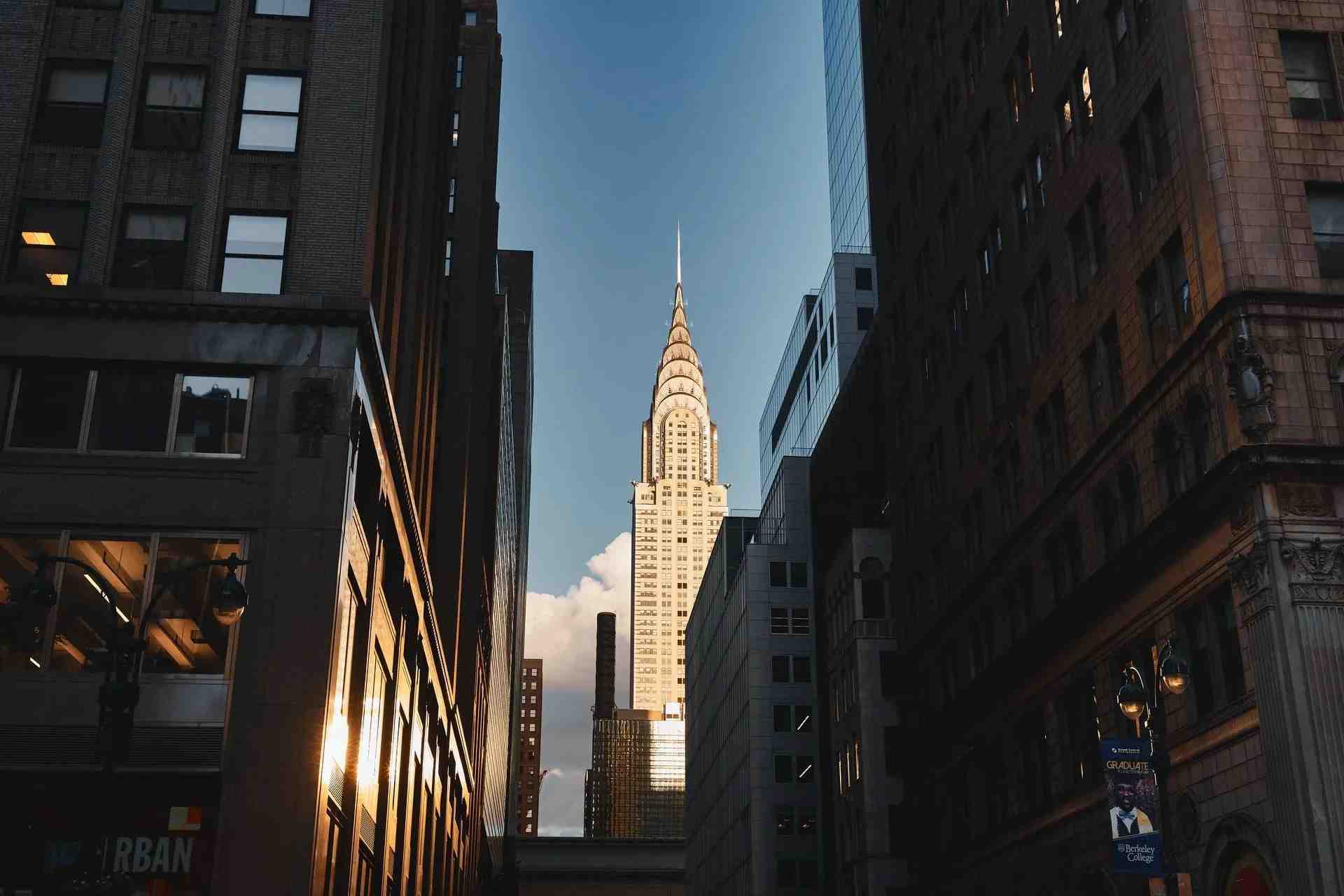 One of the epitomes of Art Deco style, the Chrysler Building is the tallest building in the world made of brick.

The Chrysler Building is an office building situated in New York City. It was designed by William Van Alen, a renowned American architect.

The Chrysler Building is considered to be one of the most stunning buildings of New York City. It was built during the end of the '20s. At the point of erection, it was the world's tallest building standing at a height of 1,046 ft (318.8 m). Its striking features make it unique among the other Manhattan skyscrapers. The Chrysler Building was designed in such a way that its sleek design and pierless corners represented the modernism of its time. When asked by the New York Skyscraper Museum in the year 2oo5 to choose their top 10 skyscrapers, 90% of the population chose the Chrysler Building as first in the rank. The building holds the record of being the tallest structure until the rise of the Empire State Building which was built in 1931.

The Chrysler Building is not only one of the world's tallest skyscraper multistoried buildings but it is also one of the most decorated office buildings in the world. The building is easily identifiable in New York city from any distance by its decorated offices and triangular vaulted windows. The architectural style of the Chrysler Building makes it unique in the world. Walter Chrysler, the founder of Chrysler Corporation, wanted to build the highest building. With the intention of creating the tallest building in the world, many skilled tradesmen were gathered on the construction site to coordinate with contractors and engineers. This tallest building consists of 77 floors with three side entrances. The three entrances of the Chrysler Building are at 42nd Street, 43rd Street, and Lexington Avenue, near lower Manhattan. The Chrysler Building was proclaimed as a National Historic Landmark in the year 1976.

If you really like reading about Chrysler Building facts, also check out articles on the Empire State Building and Eiffel Tower, USA.

The Chrysler Building has inspired the architecture of many skyscrapers. One Liberty Place in Philadelphia is one such example.

Astonishing Facts About The Chrysler Building

The Chrysler Building is the true symbol of architecture, industry, and most importantly the economy of its time. With the aim of building four floors per week, the Chrysler Building was constructed very quickly. To fulfill his dream of making the unparalleled building, Walter Chrysler hired the renowned architect William Van Alen and the construction company Fred T. Ley. Although this New York building still bears the name of the Chrysler family, it was sold by them in 1953.

In comparison to other tall buildings, the Chrysler Building took only two years to complete. The architect, William Van Alen, made a secret plan of adding a spire to the top of the building. To ensure that none of their competitors could see it before it was done, the spire was actually constructed inside a chamber of the top of the building itself.

Also known as style moderne, Art Deco was a movement in design art and architecture which was seen in the United States and western Europe during the '30s. Having existed for the past 88 years, the Chrysler Building is globally one of the most archetypical buildings due to its stainless steel Art Deco flare. The 20th century was the era of large-scale industry, concentrated wealth, and extensive city building. During the period, business was booming and therefore New York occupied major offices at that time. People wanted swanky offices at the center of the city for their convenience. Their desire was fulfilled by the automobile tycoon Walter Chrysler.

When Walter Chrysler passed away 10 years after the completion of the building, its ownership changed hands. The Abu Dhabi Investment Council acquired a 90% stake in the building in 2008.

The building cost 15 million dollars to complete which was a considerable amount in the '20s. The interior part of the building consists of many innovative elements. The pipes, which lie under the floors, carry both electric and telephone cables. The external part of the building features a distinct Art Deco pattern which has a dome, eight stainless steel eagles, and spires. Today, it is the sixth tallest building in New York and the 80th tallest building in the world. It is also 43% taller than the Pyramid of Giza.

The building is made with 3,826,000 bricks (white brick), 391,881 rivets, and 29,961 tons of steel. Dark gray bricks were used in the rows of the windows to enhance the beauty of this skyscraper. Though the bricks were laid manually, construction was carried out very swiftly. There are approximately 10,000 light bulbs and 3,862 windows in the building. The crown is made up of silver austenitic stainless steel which was manufactured in Germany.

Just like his cars, W. Chrysler decorated the building with hood ornaments, hubcaps, mudguards, and more. During the construction of the skyscraper, a very long electric wire, which was more than 750 mi (1,207 km) long, was used. It was as long as the distance between New York and Chicago. Due to the fact that the workers of the '20s didn't use any safety harnesses, the risk of death was very high at that time. However, almost 3,000 workers built the Chrysler Building and the astonishing fact was that there was no news of any fatalities. On the other hand, the Empire State Building's erection caused five deaths of workers.

The entrance lobby of the Chrysler Building is highly decorated with Moroccan marble walls and blue marble. The ceiling of the lobby is painted and scripted as 'Transport and Human Endeavor'. The 32 elevators of the Chrysler Building are beautifully decorated with intricate patterns and designs. During its renovation between 1978-1979, the entrance of the building was built in granite, steel, and marble.

Here at Kidadl, we have carefully created lots of interesting family-friendly facts for everyone to enjoy! If you liked our suggestions for 101 Chrysler Building facts: learn more about the iconic tower, then why not take a look at Taj Mahal or Pentagon building facts?