1883 Krakatoa Eruption Facts: Was It The Most Violent Eruption? | Kidadl

1883 Krakatoa Eruption Facts: Was It The Most Violent Eruption? 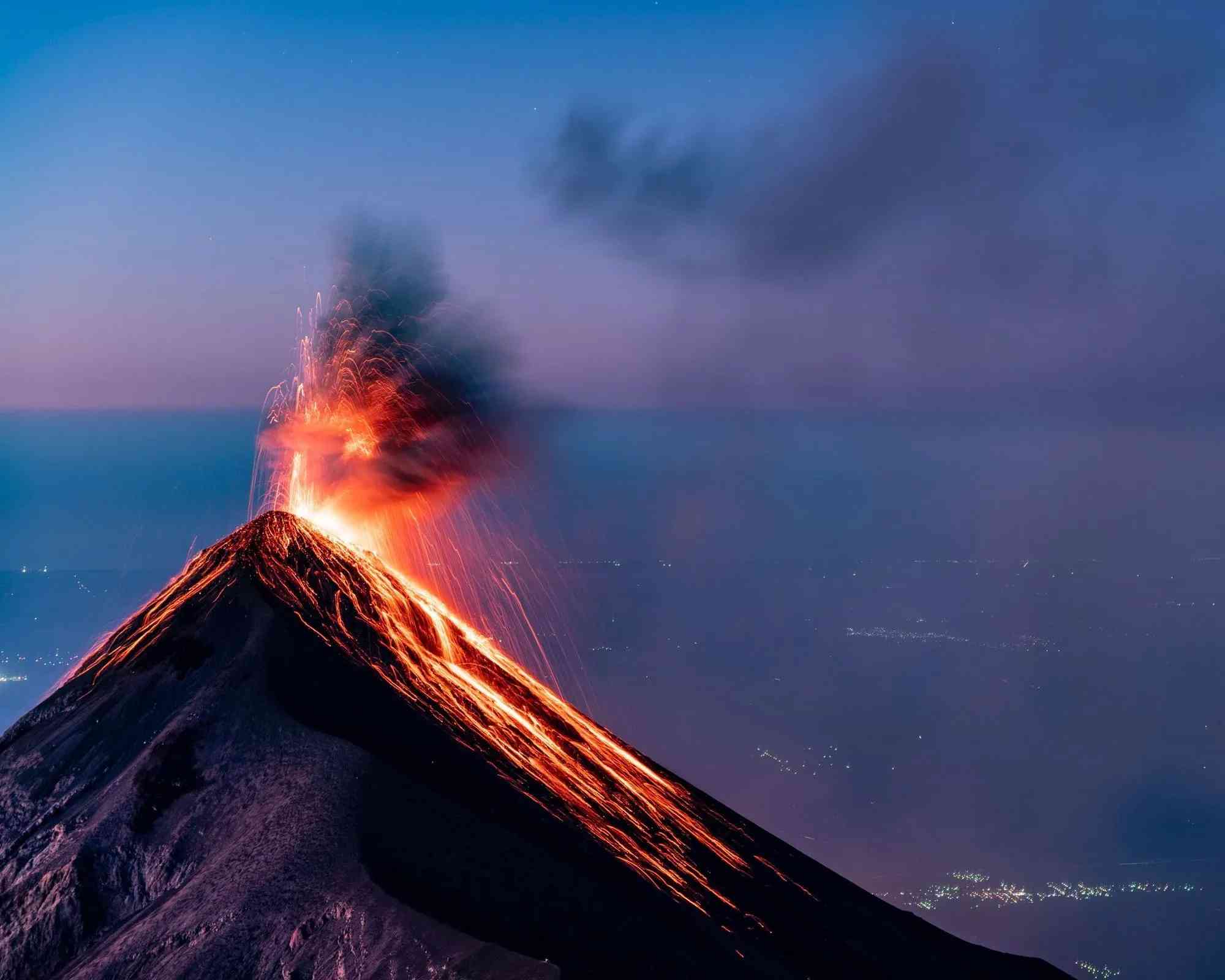 The Krakatoa eruption in the Sunda Strait, which started on May 20, 1883, destroyed almost 70% of the island and its surrounding islands.

On August 26, 1883, a catastrophic eruption peaked at Krakatoa, also known as Krakatau, occurred in Indonesia. Hot lava and avalanches of ash raced down the Krakatoa volcano and across the sea over the next 24 hours.

Krakatau, or Krakatoa, is a small island group located between the Indonesian islands of Sumatra and Java. Often considered to be the world's most famous volcano, the Krakatoa islands can be found in the Sunda Strait. The volcano is a mostly submerged caldera with three rim islands and a new cone, Anak Krakatau, that's been producing new islands since 1927 and still remains an active volcano.

The Krakatoa Committee was established by the Royal Society to 'gather the numerous accounts of the eruption and its 'associated phenomena'. The group was chaired by meteorologist George Symons FRS (1838-1900), who issued a public plea for information. The eruption of Krakatoa was an early example of crowd-sourcing data to understand a natural hazard occurrence, with correspondents from all around the world sending in accounts. Observers began to notice an exceptionally intense 'afterglow' after sunset within days of the eruption. The earliest report came from Hawaii in September 1883, and bright twilights had been reported from Australia to northern Europe by December 1883. Without a doubt, the report published by the Royal Society Krakatoa Committee and other reports published by various organizations didn't underplay the fact that this was perhaps one of the most deadly volcanic eruptions in recorded history.

Did you know that from the 1500s until the new millennium, the Krakatoa exploded an astonishing 40 times? Even after the year 2000, Krakatoa has witnessed volcanic eruptions around 10 times, with the latest eruptions in 2019.

If you have found this article on the 1883 eruption of Krakatoa, you'll also enjoy reading articles on the 1984 Mauna Loa eruption and the 1944 Vesuvius eruption.

Scary Facts About the 1883 Krakatoa eruption

Krakatoa has erupted many times throughout history, but the series of huge explosions on August 26 and 27, 1883 marked its position in history.

The Krakatoa volcano 1883 eruption was possibly the most renowned volcano in modern history, whose eruption produced the loudest sound ever recorded. It was heard as far as Perth, Australia (approximately 1,930 mi (3106 km) away) and Rodrigues, Mauritius, a whopping 3,000 mi (4828 km) away from Krakatoa! The 1883 eruption also inspired one of history's most famous artworks ('The Scream' by renowned painter Edvard Munch) as well as a Hollywood blockbuster.

When the Krakatoa volcano erupted, it spewed 31 mi (50 km) of scorching ash into the sky. Apart from the loudest sound, the force of the 1883 eruption was around 10,000 times stronger than the bomb that exploded over Hiroshima in 1945. According to official statistics, 165 villages and towns in the Krakatoa area were obliterated, with another 132 severely damaged. Nearly 36,500 people were killed in Sumatra and Java, with many more injured, largely as a result of the massive tsunamis and thermal injury that followed the explosion. In Sumatra, around 100 people died because of the astounding reason of ash rain.

On May 21, smoke was detected coming from Krakatoa in the evening, and it was clear on May 22 that the volcano was located there. The volcanic activity raged on for the next eight or nine weeks, ejecting quantities of pumice and molten stone, as well as massive amounts of steam and smoke. On August 21, the Krakatoa eruption increased in volcanic activity, leading to small eruptions.

The signs of a powerful volcanic eruption began in May. When Krakatoa awoke on May 20, 1883, it had been inactive for more than 200 years since the last eruption in 1680. Ash laden clouds reached nearly 7 mi (11.2 km) above the island, and for the next three months, the volcano's vents produced rumblings and blasts.

The Krakatoa eruption resulted in huge tsunamis in 1883. When the volcano erupted into the sea, it unleashed a tsunami at least 120 ft (36.5 m) tall, powerful enough to toss 600 ton (544.3 m ton) chunks of coral onto the beach. It also carried a steamship one mile inland, killing all 28 crew members and wiping out 165 villages in surrounding Java and Sumatra. The amount of volcanic debris that was released into the atmosphere was so high that it restricted the amount of sunlight that actually reached the Earth's surface, causing global temperatures to drop to 34 F (1.2 C) the next year. In 1888, temperatures returned to normal.

And the explosions from the Krakatau volcano propelled ash, amounting to 11 cu mi (45.8 cu km). The sun was obscured for three days in the vicinity, and the ash cloud stretched for 170.8 mi (275 km). There was so much ash that the sun shone blue in Nicaragua, on the other side of the Pacific. Floating pumice fields, some nearly 10 ft (3 m) deep, choked ports after the eruption, disrupting trade.

Krakatau is located at the convergence of the Indian Australian and Eurasian tectonic plates, which is a hotspot of volcanic and seismic activity. It is actually thought that the volcano submerged in the sea actually created a conical mountain consisting of layers of cider and ash along with volcanic debris, rock, and lava.

The cone rose 6,000 ft (1,800 m) above the sea from its base, which was 1,000 ft (300 m) below sea level. The mountain's summit was later obliterated (probably in AD 416), producing a caldera, or bowl-shaped depression, 4 mi (6 km) wide. Four small islands emerged from the caldera's surface: in the northwest, there is the Sertung (Verlaten) Island, the Lang Island, and the Polish Hat Island, which are present in the northeastern corners of the caldera, while the Rakata Islands emerged in the south or southwestern corner. Consequently, there were three more cones that emerged over time, with all of them eventually uniting into a single small island. The tallest of the three cones reached a height of 2,667 ft (813 m) above sea level.

Facts About 1883 Krakatoa Eruption's Impact On The World

The new eruption from the Krakatau volcano changed the color of sunsets. All of the volcanic debris from Krakatoa's eruption led to fiery red sunsets around the world for up to three years after the volcanoes erupted. The eruption altered global temperatures for years to come. Following the 1883 eruption, the ash, smoke, sulfur dioxide, and volcanic debris in the atmosphere reached unprecedented levels. You might remember the volcano in Iceland whose eruption disrupted the path of flights and air travel across Europe? Imagine that effect multiple times in the case of the Krakatoa. For about five years, the temperatures around the world dropped significantly, and it was only at the end of the 1880s that global temperatures returned to their usual levels.

However, volcanic eruptions have not stopped at Krakatoa since the 1883 eruptions. Almost half a century later, in the year 1927, a new island named Anak Krakatoa was formed when a part of the original devastating volcano reappeared above the water. Did you know that the name 'Anak Krakatoa' actually means 'child/son of Krakatoa' in the Malay language?

Interestingly, a part of this volcanic island submerged into the sea following eruptions in 2018, leading to major tsunami waves in the surrounding regions. This, in turn, led to almost 16,000 people being forced to leave their residences, along with 437 fatalities. Such was the height of the tsunamis following the volcano's collapse that they could easily drown out a six-story building.

Here at Kidadl, we have carefully created lots of interesting family-friendly facts for everyone to enjoy! If you liked our suggestions for 1883 Krakatoa Eruption Facts, then why not take a look at the 1985 earthquake in Mexico or the 1925 tristate tornado.