41 Amazing Facts About Maine: The Pine Tree State That Will Amaze You | Kidadl

41 Amazing Facts About Maine: The Pine Tree State That Will Amaze You 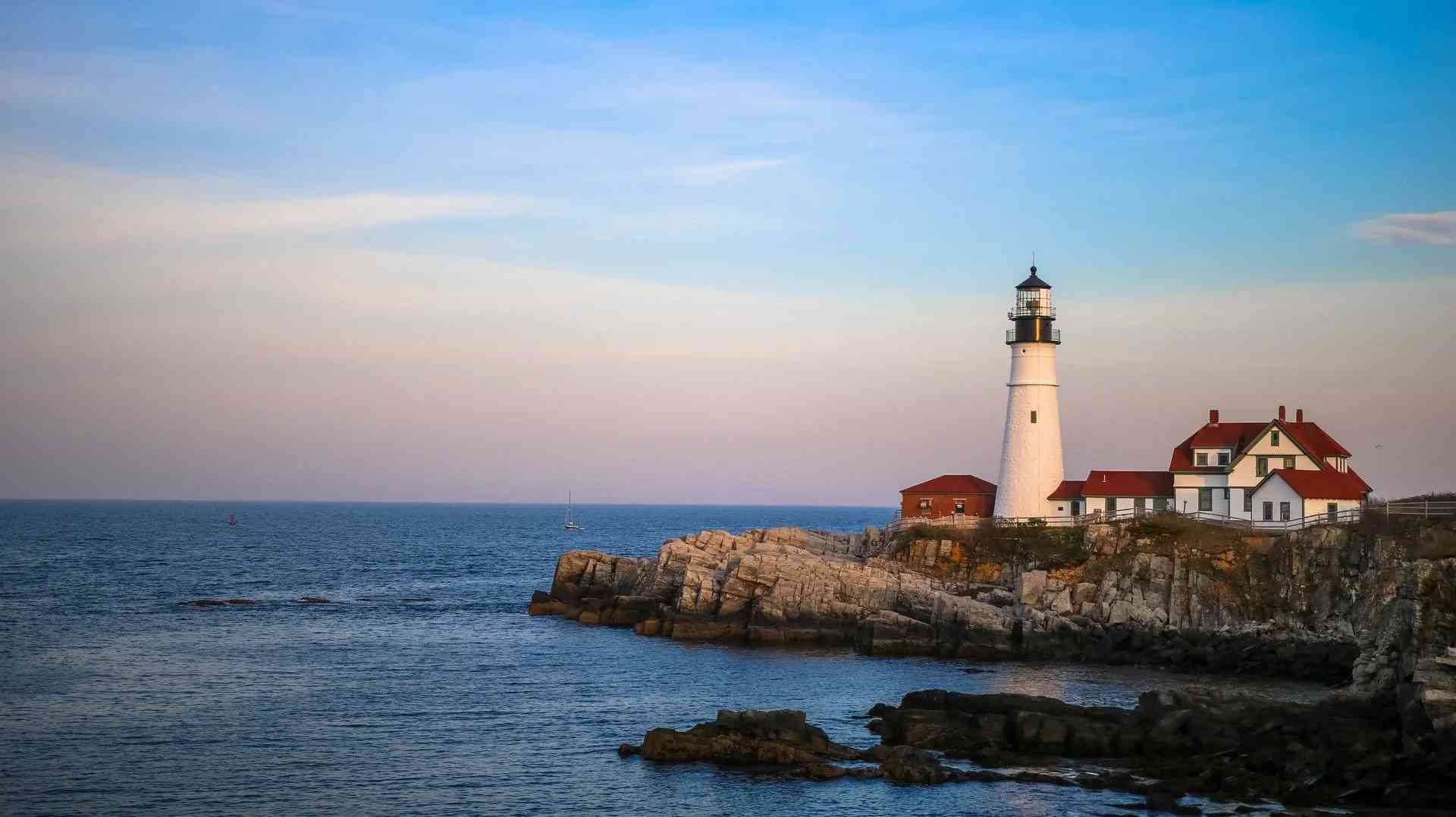 Maine is the North Easternmost state of the United States of America.

If you aren't from Maine, then one of the most prominent introductions to this state might have been through any book of Stephen King. Known primarily for two things, pine trees, and lobsters, many people visit Maine when they are planning to pay a visit to New England.

Another notable thing about Maine has to be the several lighthouses, there are 67 in total. Maine is often about hardworking people. Compared to the other 48 contiguous states of the US, Maine has a rural population of around 61.3%, making it a predominantly rural state. Apart from seafood, many people are attracted to Maine because of the misty weather and the never-ending rocky coastline. Around 3,166 coastal islands are dotted along its coastline. As many people still find this state mysterious, we have created this guide as an introduction to this New England state.

So, do keep reading to know all the interesting facts about Maine.

If you enjoyed this article, why not also read about New York agriculture facts and Puerto Rico culture facts, here on Kidadl?

How many electoral votes does Maine have?

As a small state, Maine doesn't have a whole lot of electoral votes to count on. The total number of votes present in the US is 538, amongst which a majority of 270 is required for a President or a Vice President to win. Compared to Maine, even after being a small state, New York has 29 electoral votes because of its importance in the country. The demarcation of electoral votes is usually based on the census. Maine, along with Nebraska forms one of the two states that follow the District Method where the electoral votes can be divided among two or more candidates.

About The Geographical Location Of Maine

When it comes to the geographical location of the Maine state, it's situated in the New England region of the US.

The location of Maine is pretty interesting, as Northern Maine is bordered by the Canadian provinces of New Brunswick and Quebec, while the southern half faces the Atlantic Ocean. On top of that, Maine is only bordered by one US state, New Hampshire in the west. Usually, the Maine state is divided into three geographical areas, the coastal lowlands that contain sandy beaches, bays, salt marshes, and inlets. The biggest island is Mount Desert Island, and the thousands of islands were thought to have been formed due to the effect of an Ice Age. Some of these islands make up the Acadia National Park, one of the most visited national parks of the US. The second region is the central uplands, also called the eastern New England uplands, and contains a lot of fertile lands including lakes, and streams. The third region contains the white mountains which contain the highest point of Maine, Mount Katahdin standing at a height of 5,268 ft (1,605 m). Along with the Acadia National Park, another important part of Maine is the Baxter State Park that houses Mt Katahdin.

The name of Maine is thought to have originated from the nautical term mainland. It might have been a way to differentiate the land apart from the numerous islands that surround the coast. Some believe that the name might have originated from an English village or a former French province. As you may know, Maine state is also known as the Pine Tree State. It's an apt name as almost 90% of the land is covered in trees. The forest cover is an important part of Maine's economy. And, Maine also produces a good amount of Maple Syrup from these forests. Along with producing a good amount of limestone and gravel, Maine also has a good storage of fabulous quality tourmaline crystals.

When it comes to the political bifurcation of the state, Maine was originally a part of Massachusetts. Moreover, the Massachusetts Bay Colony actually annexed southwestern Maine. But, in 1820, Maine became the 23rd state as a part of the Missouri Compromise. Maine's original state capital was Portland, but it was later changed to Augusta.

Everything to Know About The People And Culture Of Maine

Because of the many things that you might have heard about Maine, it's often confusing to judge this beautiful state and its people. So, let's have a look at the people and culture of Maine.

Apart from pine forests, one of the things that this state is known for is the Maine lobster. Once you place your foot on this state it becomes evident that the people are proud of the lobsters present in Maine. And, the 5,000 m (8046 km) coastline of this state allows for the perfect circumstances for raising the best lobsters. Rockland hosts an annual lobster festival every year.

However, the official state insect of Maine is the honeybee. The company Burt's Bees was initiated in 1984 in Maine, and the products are made from the wax produced by the Burt Shavitz's local bees.

It's often a common question of people to know if Maine is considered a safe place. And, contrary to the imaginative mind of Stephen King, Maine is actually one of the safest places to live in the United States. Along with having the fourth lowest property crime rate, Maine also has the lowest violent crime rate in the country. Hence, it's a really good place for living with your family. Cumberland is regarded as the safest city of the state closely followed by Sabattus and Cape Elizabeth. Compared to the average US national gun violence rate of 38%, Maine fares pretty well at 28%.

Environmentalism is in the culture of Maine right from the 1980s, and currently, the state fares one of the best when it comes to pollution rates.

Another thing that forms the culture of Maine is the huge production of low-bush blueberries. The wild blueberry is the defining fruit of this state and Maine is also the nation's largest supplier of this tasty delicacy. Most of the blueberries are grown wild, and when in the state, don't forget to have a taste of it. Maine is also the top producer of broccoli and potatoes.

During the winter months, one of the fun activities among the locals is apple picking. Even after being a coastal state, Maine produces a lot of apples, and you can enjoy checking out the orchards during the season. However, most people visit Maine during the summer months to enjoy the beautiful coastline and the numerous beaches. In fact, the locals wait for the summer months and have given Maine the nickname of vacationland.

The Most Famous Person From Maine

Hand's down, the most famous person from Maine has to be the American novelist Stephen King.

Well, if you're a fan of horror novels, then you should know about the novelist Stephen King. He was born in Portland, Maine in 1947 and since then has been integrally tied to the state. On reading his books, you understand that everything from the coastline of Maine to the weather has been a major inspiration for his journey as a writer. He wrote his first successful horror novel, Carrie, while working as an English teacher in a high school in Maine. Apart from using real locations of Maine, King has gone ahead and created a world of his own in the state. He used the city of Bangor as an inspiration for the location Derry, used in the novels like It and 11/22/63. Moreover, one of his most successful novels, Salem's Lot had the town of Jerusalem's Lot that's also based in Maine. King himself grew up in the town of Durham, the reflection of which can be seen in the portrayal of Maine state in his stories.

However, he is not the only famous person from Maine. The 15th US Vice President, Hannibal Hamlin as well as the 41st US Vice President Nelson Rockefeller hail from the Maine state. Apart from that, Margaret Chase Smith, the first US woman to serve in both chambers of Congress was from Maine. Even George H. W. Bush (former US President), has a strong familial connection to the Maine state, especially around Kennebunkport.

Another literary person, the poet Henry Wadsworth Longfellow was also born in Portland, Maine. You can visit the childhood home of Henry Wadsworth Longfellow when in the state, and it's also regarded as the oldest brick building of Portland. If you have read Charlotte's Web, it's interesting to know that E. B. White resided in Brooklin, Maine, and you can still visit the 18th century E. B. White House in 470 Bay Road in Brooklin. The farm of this house was behind the inspiration of Charlotte's Web.

Here are some amazing facts about Maine that you should know.

Maine is estimated to have the largest population of moose in the United States of America. The state is also the home to Jackson Laboratory that is the largest supplier of genetically purebred mice and is also the world's largest non-profit mammalian research laboratory.

Historically, Maine is thought to have been discovered by the Vikings around 1,000 years ago.

Even though Maine is the 23rd state, it's known for having the oldest state constitution in the country.

The Portland Head Light in Cape Elizabeth is the oldest lighthouse in Maine. According to the last census, Cape Elizabeth only has a population of around 9,015 people.

During the Revolutionary War of 1775, the residents of Maine were the ones to participate in the first naval battle.

There are 424 towns, 22 cities, and 16 counties in the state of Maine. Along with that, there are around 416 unorganized townships, hence it was once called the most rural state. The current population is assumed to be around 1.3 million.

Here at Kidadl, we have carefully created lots of interesting family-friendly facts for everyone to enjoy! If you liked our suggestions for 41 amazing facts about Maine: The Pine Tree State that will amaze you then why not take a look at amazing things that you can learn from animal teamwork, or 23 facts about awesome Arizona state landmarks you have to see?