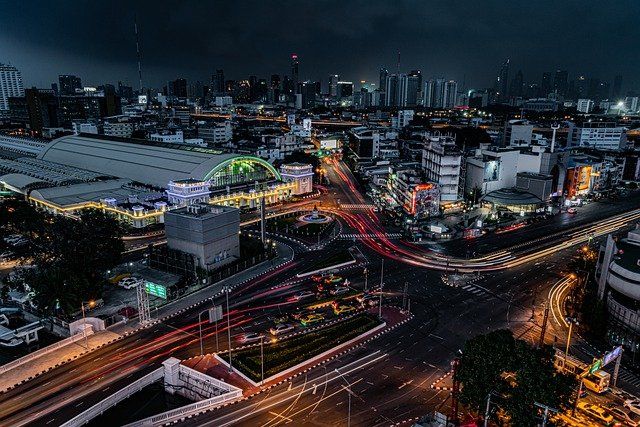 Every city is unique, but some are so special that everyone wishes to visit at least once in their life.

Thailand's capital, Bangkok, is one such beautiful city, which is often called the City of Angels. A chaotic city, with a backdrop of some of the most divine locations, Bangkok never ceases to amaze.

The beautiful Thai capital holds a lot of interesting facts in its womb, that will make you love this city even more as we reveal them one by one. So, why not book your plane tickets right now for your next holiday destination; Bangkok!

Check out these amazing Bangkok facts so that you can fully enjoy your visit to the Thai capital.

Do you know that Bangkok is not the city's real name?

An interesting fact that many visitors do not know is that the real name of Bangkok is Krung Thep, which means the City of Angels.

In fact, Krung Thep itself is an abbreviated version of its original name, which is the longest city name of any city in the world.

In its long-form, this translates to various meanings, including City of Angles, Magnificent City of the Nine Gems, Home of Gods Incarnate, and Great City of Immortals.

Bangkok is located on the shores of the Chao Phraya River delta in central Thailand.

This capital city of Thailand is blessed with a large number of natural landmarks that attract millions of tourists every year.

The colorful burst of the skyscrapers and vibrant city life, including its own version of Venice are what makes Bangkok the most visited city on Earth.

You are wrong if you think that the largest city in Thailand, Bangkok, is all about landscapes and skyscrapers. Its rich history is equally evident in hundreds of temples around the city.

From Wat Arun Temple to Wat Phra Kaew temple, this city is full of many stunning architectures that will surely satiate your spiritual needs.

Bangkok is a highly populated city in Thailand with an estimated population of around 10.7 million. The city is always bustling with people and traffic during the day.

The nightlife of this city is also equally cheerful, with the city crowd greeting you with a smile as you pass by.

This is why most locals would advise you to visit Bangkok between November and February, when the weather is much pleasant.

Bangkok is a fun place to be, but only if you know where to find that fun. No matter your personality, there is everything for everyone in Bangkok. While there are so many adventurous places in Bangkok, let's look at some of the famous tourist spots that you must explore when visiting the city.

Perhaps the most visited tourist spot in Thailand, and home to the Thai King, is the Grand Palace. This palace is a spiritual temple and is also considered one of the Royal Palaces.

The glorifying history of Thailand is beautifully displayed on the walls of the palace that are adorned with intricated details.

Within the grounds of this beautiful Grand Palace is the Temple of Emerald Buddha or Wat Phra Kaew. This Buddhist temple enshrines the image of Buddha and is the most significant Buddhist temple in the country.

If you are visiting Bangkok for the first time, you cannot miss the amazing Floating Markets. Similar to Venice, vendors at the Venice of east Bangkok sell their products from traditional boats.

Floating markets are located throughout the city, mostly following the east bank, but their opening and closing times may vary. Thus, be sure to be mindful of their timings. These shops usually operate in the early morning, around 5 a.m., and remain open until lunch, which roughly falls around 1 p.m.

Wat Arun, also commonly known as the Temple of Dawn, is located 260 ft (79 m) above the west bank of the Chao Phraya River. The place attracts thousands of visitors every day and is known for its mesmerizing view of surmise and sunset.

Regarded as the country's earliest center for education and serving as one of the headquarters for the education of Traditional Thai medicine, Wat Pho is more than just a center of enlightenment.

In fact, this temple offers the largest collection of images of Buddha. The famous and the largest one of them all is the reclining Buddha.

Ever fancied diving with sharks? Well, then you ought to visit the Siam Ocean World Aquarium. This aquarium is the largest one in southeast Asia and is home to more than 400 fish species and crustaceans.

There are also shark and penguin feedings, for someone who likes hanging out with these creatures.

If you like to pamper yourself, then check out various famous massage parlors to get a soulful Thai massage.

Once tattooed by warriors before they head for battles, Sak Yant or magical tattoos come in various shapes, designs, and meanings.

For people who want to get one of these tattoos, the monks will help choose the one that best fits the person's aura. The only thing they need to do is wake up early and endure some 30 minutes of pain.

It would not be incorrect to say that Bangkok is the city of street food because you can find food in literally every street you go to.

Thai people are known for their wonderful hospitality and street food is the one thing that you should not miss when in Bangkok. This magnificent city is home to many mouth-watering delicacies. You must try these famous traditional Thai cuisines when you visit the city.

One of Bangkok's main transportation hubs, Victory Monument, is known for serving some of the best Thai food. In the surroundings of this locality, you will find a bountiful collection of eating spots, including restaurants, food stalls, and snacks galore.

Some of the famous eateries in the Victory Monument area include the famous boat noodle alley restaurants, Kuay Jab Jaedang and Phahon Yothin Soi 1.

Yaowarat is the best place to explore some of the awesome street food experts who serve a plethora of Thai and Indian cuisines. While this place is ratherquiet in the daytime, the real food magic begins when the sun goes down.

Some of the local-recommended restaurants in Yaowarat are Toney Restaurant, T & K Seafood, Kuay Jab Uan Pochana, and Khao Gaeng Jake Puey. Be sure to check out Bua Loy Nam King if you are someone who can't end your night without dessert.

Ratchawat market is one of the traditional markets in Bangkok that is known for serving roast duck, Kobe beef noodles, and stir-fried curry shark. A few blocks away is the Sriyan market, known for a fine selection of noodle and curry restaurants.

The sidewalks are crowded with mouth-smacking food stalls that serve jungle curry and other street snacks. Some of other the popular cuisines you should check out when there are at Ratchawat or Sriyan markets are Pad See Ew and Ran Gaeng Pa Sriyan.

Bang Khun NonThis is a must-visit for Bangkok's highest quality street food. Unlike others mentioned above, Bang Khun Non is not that crowded, so you will definitely enjoy your food without worrying about someone bumping into you and dropping your plate.

There are many more streets in Bangkok, where the aroma of garlic, fragrant noodles, and meat are a daily affair. These include Charoen Krung (known for rice soup with fish) and Petchaburi Soi 5 (known for a delightful bowl of tom yum Goong noodles).

Traditions and Customs of Bangkok

So, what makes Bangkok so popular among tourists? Is it the street food, famous temples, or the Thai culture with a long history? Well, we would say all of the above, but what makes this city so unique among tourists is its traditions and customs. Here are 10 fascinating Thai traditions that you should know.

One thing that you would notice when you visit this city is that locals are wearing similar colors. This is because Thai culture emphasizes the effects of color on your day. For instance, Monday is for yellow, Tuesday is for pink, and Wednesdays are for green.

Thai people are always smiling and that is why the country is honored with the nickname, the Land of Smiles.

Unlike the west, where sharing food with others is almost unfathomable, Thai natives love to share food. This indicates how much generosity is deep-rooted in their culture.

Thai people find it very disrespectful to take your shoes with you inside the place you live or eat. This is why they remove their shoes or sandals before entering their home. There is a strict sign not to wear shoes inside in most places, such as restaurants and Thai massage parlors.

Respecting the elderly is a norm in Thai culture. Thai people often drop their heads down when standing next to someone older than them to address them with respect.

Every country has its own unique facts, which may sound even weirder if you are not a local. So, if you are in Thailand's capital, make sure you know these facts to save yourself from an unexpected unfortunate experience.

It's illegal to step out of your house without wearing an undergarment. We are not sure how they figure out who's wearing what underneath, but it is considered a crime.

It is also considered illegal to step on any Thai currency. Whether they are Thai coins or Thai notes, they all carry an image of their kings and Gods. Therefore, watch where you walk to avoid any legal action against you, if you accidently stand on a coin.

Did you know that Thailand was the world's first country to introduce third-gender washrooms? In Thailand, you can often notice a third gender washroom alongside the usual male and female washrooms.

Durin fruits are common on Thai streets and you can enjoy these juicy fruits all you want. However, you must refrain from using it as a weapon. Using the Durin fruit as a weapon is illegal and penalties will be levied depending on the number of times thrown at the victim.

If you still did not get enough of these wonderful Bangkok facts, we have some more for you to know.

You might have seen a can of red bull in your local grocery store and have probably bought one for yourself as well. But do you know red bull has its origin in Bangkok?

Chaleo Yoovidhya created this energy drink in 1976, which has become a famous energy drink brand worldwide. Yoovidhya was also named the richest man in Thailand at the time of his death.

Chinatown of Bangkok isn't just a lively, vibrant area around Yaowarat, but it also houses the largest gold Buddha in the world.

Thai people love their royal family, which is evident in the way these families are displayed in almost every corner of this great city. You can spot many royal families and their paintings on bridges, buildings, restaurants, and other major hangout spots.

One of the reasons why Thailand never succumbed to the European colonization was the excellent leadership skills of King Rama V. The Thai King Rama V often gave away small lands to Europeans as a trade-off for staying free.

Wat Benjamabophit or 'the marble temple' is one of the famous landmarks of Bangkok. This temple was also featured in many international shows, including The Amazing Race.

It is mandatory for movie theatres and cultural organizations to play the King's anthem before playing any movie or performance.