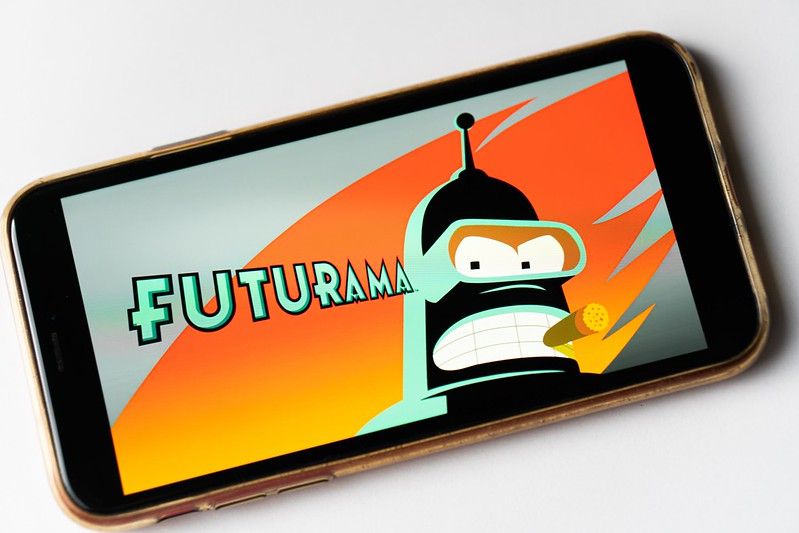 In 1999, Matt Groening followed up 'The Simpsons' massive success with a sci-fi comedy idea.

Despite the fact that Groening's follow-up to 'The Simpsons' had a difficult time, Futurama has managed to become an online sensation. It has been remembered affectionately as one of the smartest and most-loved animated shows ever.

Futurama has suffered three different cancellations; however, it topped each time, with many Emmys and a devoted fan base. Billy West, known on the show as the voice of Fry, also lends his voice to many other characters, including Professor Farnsworth, Dr. Zoidberg, and several others.

Between March 1999 to August 2003, the series aired on Fox. Later, Comedy Central took it over and aired between March 2008 and September 2013. It has long been a fan and reviewers' favorite, winning six Emmy Awards and two Writers Guild of America Awards. It's no surprise, however, that fans – as well as the show's executives and creators – are excited for the new 20-episode run that will premiere on Hulu soon.

The Futurama pavilion, designed by Norman Bel Geddes, portrayed how he envisioned the world might look in 1959. Other titles suggested for the series included Aloha, Mars!, and Doomsville, all of which were 'resoundingly rejected, by everyone associated with it', according to Groening.

Three alien signs can be seen in the background of the Futurama opening sequence.

'Tasty Human Burgers', 'Rent a Human', and '3D Rulez' are among the signs.

00100100 is Bender's apartment number. For the dollar sign, this number sequence is binary.

Matt Groening states that the idea for Futurama occurred to him while listening to The Incredible String Band's song called 'Robot Blues'.

As per Groening, Century Fox never truly intended Futurama to be a hit. Futurama was canceled by Fox after a long time. From the start, the ideas of Century Fox and Groening did not match.

Futurama managed to beat series like Doctor Who to the Easter egg punch at nearly every point in the long history of science fiction's war.

Throughout the show's seven seasons, almost every aspect pulls back to reveal more strangeness. Do you think the endemic owl infestation in New New York is just a visual gag, or that Leela's parents didn't appear until season four? Why do you think it happened?

For more than two decades, Futurama fans have been piecing together the show's mysteries, attempting to interpret David Cohen and Matt Groening's DaVinci Code.

Most impressively, fans appear to have accomplished what two networks and a slew of writers have failed to do: they've worked out how to keep Futurama alive eternally without producing a single line. It's magical? Wrong! Science.

Meanwhile, it is revealed at the end of the last episode that time is functionally set on repeat.

Just before the pilot episode events, the Professor devised a device that would tear through reality, restoring everything to its original state if it were ever activated and wiping everyone's memory in the process.

Farnsworth presses the button at the end of the episode, making Futurama the only program that can be restarted from the beginning.

The character of Professor Farnsworth is based on the real-life Philo Farnsworth, the inventor of the television.

At the same World's Fair that gave the show its name, Farnsworth was also an inventor.

Turanga Leela is the full name of Leela's character on the program. Turangalila-Symphonie, composed by musician Oliver Messiaen in 1948, inspired the name.

Animators placed shadows of not-yet-introduced characters into a scene at least a couple of times during the performance.

When Fry falls into the freezer in the first episode, Nibbler's shadow can be seen under the desk. Several episodes later, the character made his first appearance.

Leela's parents' shadows can also be seen two seasons before viewers meet them.

The Theme of Futurama Sitcom

The theme of Futurama revolves around science fiction and futuristic prediction of society. The creator first formed the idea while hearing the 'Robot Blues' song from 'The Incredible String Band'. From the pilot episode itself, the show gained popularity, and by the time of the final episode, it had gained massive success.

The sound that the Hypnotoad makes is referred to as 'Angry Machine' and is basically the sound of a backward-running turbine engine, recorded and used for Hypnotoad.

Dr. Zoidberg, Professor Farnsworth, and other secondary characters are all voiced by Billy West, who also plays Fry on the show.

Leela and Fry's clothes in the episode were carefully selected. Leela's white tank top pays homage to Ripley from Alien (and other sci-fi heroines), while Fry's outfit is inspired by James Dean's appearance in Rebel Without a Cause.

The Robot Bender’s famous antenna has had innumerable uses over the course of the show. It has been used as a snooze button, a popcorn butter dispenser lever, a timer for his digital camera, a beer pump, and so much more!

A scenario concerning Fry's dog Seymour was based on the true story of Hachiko. While waiting for Fry to return in the episode 'Jurassic Bark', Seymour becomes petrified. Hachiko, the real-life dog, was a Japanese Akita.

Hachiko was adopted by Hidesaburou Ueno, his master and a Japanese professor. Every day, Hachiko would welcome his master at the neighboring Shibuya Station at the end of the day.

The Professor died of a brain hemorrhage one day and was parted from his dog.

For the following nine years, Hachiko awaited Ueno's return every day, arriving at the station exactly when the train was scheduled to arrive.

Futurama is one of the greatest science fiction shows ever created. The show was created by Matt Groening (creator of The Simpsons) and David X. Cohen (co-creator of South Park).

In the show, Fry travels through time and space to meet various characters. Futurama had its great share of success due to its unique idea. Every episode focused on something new and interesting.

The characters had their roots in something unique. For instance: the character Bender got its name from John Bender from 'The Breakfast Club'. Here below are some of the famous sitcom episodes of Futurama.

In the Farnsworth Parabox, the Professor constructs a box containing a parallel reality in which everyone has a little different doppelgänger, and everything is the same except the outcome of coin flips.

However, once the Zoidbergs steal the box containing the known Universe, the two factions must go Universe hopping in order to recover it.

The episode is packed with laugh-out-loud moments (especially from the Professor, who is at his most obnoxious here), and it demonstrates how well the program handled traditional sci-fi cliches.

Futurama, while being set in the 31st century, was full of contemporary pop culture references, and none better captures that than this episode.

This episode even stars cast members from the original Star Trek (not to mention the fact that it's a parody of a Star Trek episode).

It's also a spot-on remark on modern fandom's ardor and how some people can take their passion for classic shows a little too far—Roswell's Happily Ever After.

Futurama was also a pretty well-written program, as shown in this episode. Everyone on Earth received a $300 tax rebate. In a concluding sequence that pays off one of the best gags in show history,

Fry's choice to drink 100 cups of coffee saves the day, and all of the autonomous character strands come together brilliantly.

The Hypnotoad is featured in one episode of Futurama. 'The viewers will wake up remembering nothing and feeling rejuvenated', a voice says at the end of the episode.

Hypnotoad is a fan favorite and one of Matt Groening's favorite characters.

Because fans are constantly figuring out the alien language that appears in the show's backdrop, it has been updated twice. The third language has yet to be identified, leading many to believe it is gibberish.

If you've ever wondered how the program was able to tackle mathematical issues and scientific topics so accurately, it's because the authors have a combined total of three doctorates and seven master's degrees.

During an interview, one of the writers said, 'We were easily the most overeducated cartoon writers in history.'

When John Dimaggio auditioned for the voice cast, he wasn't actually looking forward to playing a role, which he actually ended up playing.

When Futurama got fined while working on the Futurama movie 'Into the Wild Green Yonder', they created their own studio.

The show's producers decided to have their animation studio after they suffered a fine while working 'Into the Wild Green Yonder'.

Why is it called Futurama?

The Pavillion at the 1939 New York World's Fair was the main reason behind the name. The show, in other words, is a futuristic imagination — hence Futurama.

Why did Futurama end so abruptly?

Futurama has been canceled by Comedy Central, though they did not state any specific reason. Shows are typically canceled due to poor ratings. Matt Groening has said that he would like to get it picked up by another network, but being canceled twice was going to make it that much more difficult.

Matt Groening was the person who created Futurama back in the late 19's.

Is Futurama older than The Simpsons?

No. 'The Simpsons' is older than Futurama.

What's better the Simpsons or Futurama?

Futurama is better than Simpsons.

Is Futurama a kid show?

It is not exactly a kid's show because there are many scenes in the series that should be watched under parents' supervision. Otherwise, it's not bad.

Why is Futurama not yellow?

There was no such plan as creating Futurama as yellow. In fact, the yellow color of the Simpsons wasn't planned either. However, Georgie Pulse added his imagination and made the Simpsons yellow.

What age group is Futurama appropriate for?

Futurama in the United States has an original rating of TV-14, with some of its episodes getting a TV-PG rating for mild references.

Do The Simpsons and Futurama exist in the same universe?

Yes, The Simpsons are Futurama's past. Therefore, it can be concluded that Futurama and Simpson exist in the same universe.

Who is the best character in Futurama?

Bender is known as the best character in the Futurama series.

What year is Futurama set in?

Futurama is set in the year 1999 but then moves forward to 2999 after Philip's accident.

Futurama was created by Matt Groening and was developed by David X. Cohen.