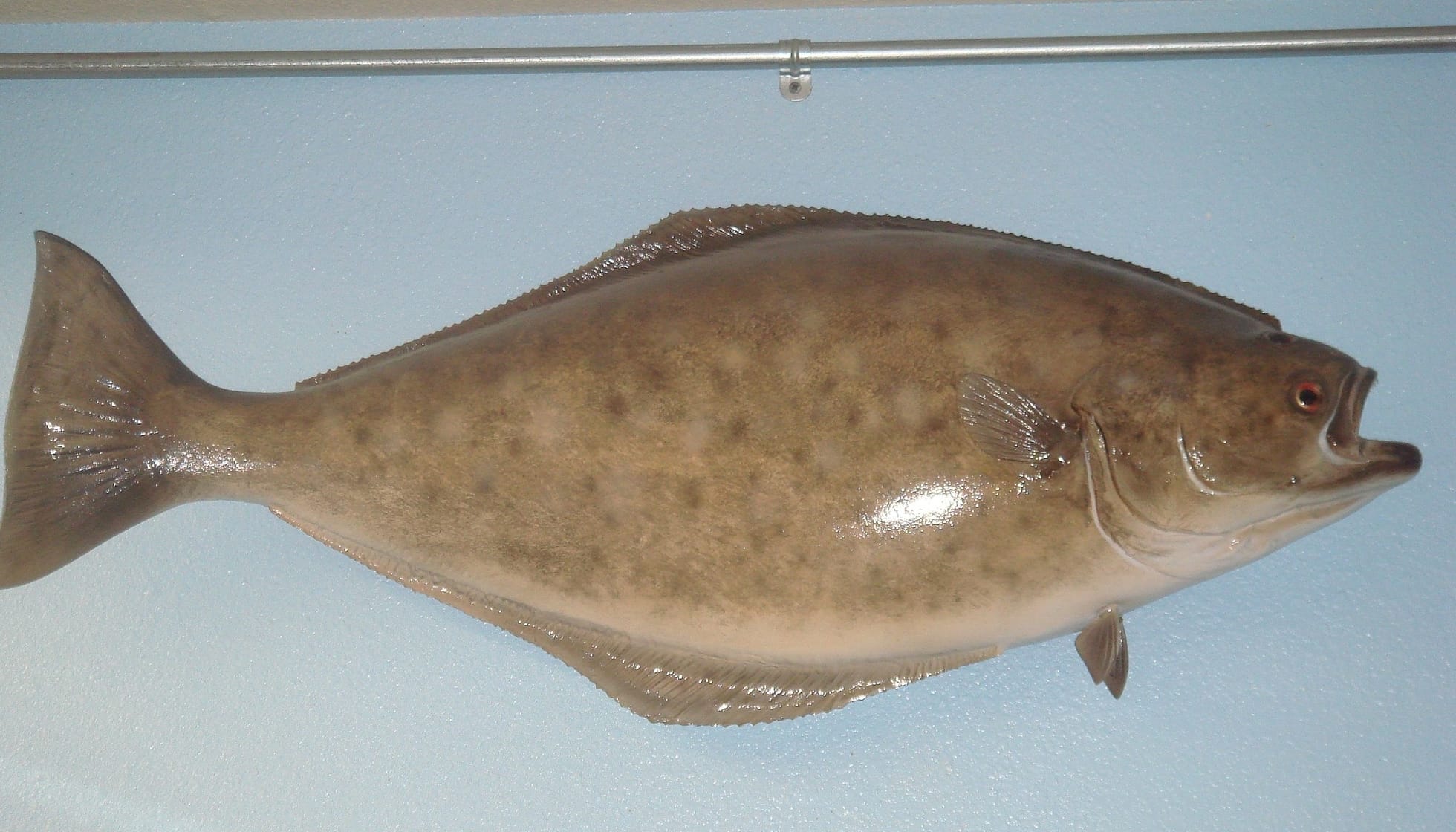 Atlantic halibut (Hippoglossus hippoglossus) is the biggest flatfish species in the world. The halibut Atlantic has a diamond-shaped body with dark brown skin with black and white spots. The North Atlantic fish has been rated Endangered and placed on the IUCN Red List. The primary cause of the decrease in the population of this flatfish species was overfishing. It is especially seafood, and hence it was protected by sustainable management of its harvest and limited fishery. Halibut is the largest flatfish species in the world present from the Barents Sea to as far as the Bay of Biscay.

Fun fish facts will help you arouse your interest in fisheries sciences and maybe even motivate you to deep dive into the Atlantic yourself! Afterward, do check our other articles on Pacific cod and giant trevally as well.

What type of animal is an Atlantic halibut?

The Atlantic halibut is the largest flatfish in the world and comes from the family of right-eye flounders. A weird but interesting fact about this fish species is that they have both their eyes on one side of their head.

What class of animal does an Atlantic halibut belong to?

Atlantic halibut belongs to the class of ray-finned fishes. The halibuts are bottom-dwelling creatures that breed close to the seafloor.

How many Atlantic halibut are there in the world?

It is hard and difficult to gauge the population of such widely spread aquatic flatfishes, but relative comparisons in their populations have found their numbers dwindling to about 10% of their strength in 50 years since 1950.

Where does an Atlantic halibut live?

Atlantic halibuts are expert swimmers who live near the ocean floor, they naturally live along the sandy or gravelly seabed. This fish swims to shallower waters in the summer and migrates back to deep waters in the winters. It is present across the North Atlantic from Labrador, Greenland to Iceland.

What is an Atlantic halibut's habitat?

The favorable habitat for Atlantic halibut fish is the temperate waters of the North Atlantic Ocean and some parts of the Arctic Ocean.  They flourish in cold temperatures at depths of up to 6500 ft (1981 m). They mainly live in deeper waters with an occasional swim to the shallow coastal areas mainly for the purpose of finding food.

Who do Atlantic halibut live with?

There hasn't been enough research done to figure out the lifestyle and habitat of this flatfish species, but it is reasonably assumed that they live and feed themselves independently.

How long does an Atlantic halibut live?

Atlantic halibuts can live for up to 50 years, while their average age is around 30 years.

The spawning season for Atlantic halibut fish lasts from December to June. Atlantic halibut reach reproductive maturity by the ages of eight to 10 years for males and 10 to 14 years for females. They are spawners who reproduce once a year and in groups. Females are batch spawners, which means they can ovulate multiple batches of eggs in a single reproductive season. Females can produce between 0.5-7 million eggs in a single season, depending on their body size. External fertilization is used by Atlantic Halibuts, which means that the males and females release sperm and egg cells respectively directly into the water. Fertilized eggs float freely in the water for 16 days before hatching.

The IUCN marked the Atlantic halibut as an endangered species in 1996. The major cause of its population decline is extensive Atlantic Halibut fishing for its meat. Because of the species' slow growth rate and late breeding age, males take seven to eight years to breed, and females take 10-11 years, the Atlantic Halibut has been especially vulnerable to overfishing.

The body of an Atlantic halibut fish is compacted and oval-shaped, with both eyes on the right side and the left side totally blind. On their eyed side, they vary widely from greenish-brown to almost black color. Young halibuts may be spotted or flecked, with white inner sides that become marked with patterns of grey or reddish spots as they mature. Their mouths are enormous and they have numerous sharp curved teeth.

Halibuts do not look that cute, in fact, some people think they look delicious as they are consumed in large quantities by people.

Halibuts often display signs of communication through their tail bubbles to communicate with other fishes.

How big is an Atlantic halibut?

The Atlantic halibut (Hippoglossus hippoglossus) is the biggest groundfish in the Atlantic Ocean. Their average size approaches a length of more than 15 ft (4.5 m) and weight of over 400 lb (181.4 kg). The Atlantic Halibut record weight to date is 515 lb (233.6 kg) for a fish caught in 2004 by fishermen of Norway.

How fast can an Atlantic halibut swim?

Atlantic halibuts are not the fastest or the most active of the swimmers. However, fishermen need to take care of their agility while hunting for these halibuts as they ferociously try to swim themselves away from danger when trapped by predators.

How much does an Atlantic halibut weigh?

Atlantic halibuts do not have any specific name assigned to them.

What would you call a baby Atlantic halibut?

The Atlantic halibut is a fish with carnivorous food habits. It basically eats everything in the ocean that is smaller than itself. Young halibuts eat worms, crustaceans, and small fish, and adults prefer to prey on larger fishes such as redfish, cod, haddock, herring, pogge, sand eels, and capelin.

Atlantic halibuts have very sharp gill rakers and pointy teeth that can be dangerous while fishing without appropriate protection.

The most mind-boggling fact about Atlantic halibuts is that they're born with asymmetrical bodies and have an eye on either side of their head. As the flatfish grows bigger, one of the eyes shifts to the other side of their head with practically two eyes on one side. These tough swimmers always swim with their blindside faced down to the ocean floor.

How does the Atlantic halibut regulate its body temperature?

The Atlantic halibut lives close to the floor of the sea to regulate its body temperature. Halibuts’ preferred temperature is 37-41 F (2.7-5 C).

Why is the Atlantic halibut endangered?

As the Atlantic halibut is quite easy to capture and is one the largest flatfish consumed as seafood, they were subjected to overfishing and harvesting to suffice the huge demand for meat supplies in the 19th and early 20th century. Their populations massively dwindled in the latter part of the 20th century.

Here at Kidadl, we have carefully created lots of interesting family-friendly animal facts for everyone to discover! Learn more about some other fishes from our king salmon facts and codfish facts pages.

You can even occupy yourself at home by coloring in one of our Atlantic halibut coloring pages.