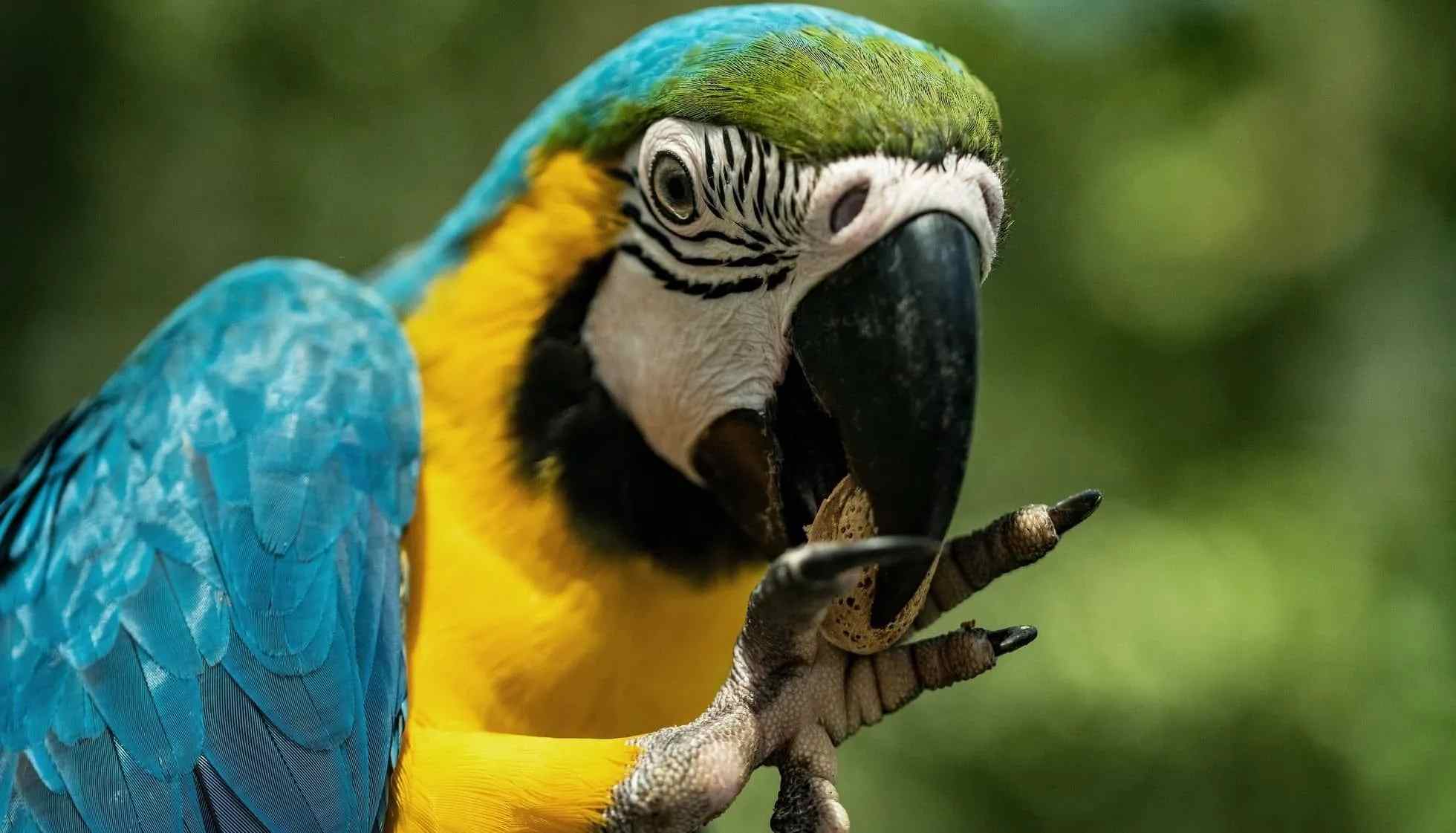 Macaws eat an extensive range of food products like seeds and fruits. The blue and yellow macaws mate for life. They have a better chance of getting a mate if they have brighter and bolder colors. These birds are known to be gregarious and calling in flight or emitting loud metallic screeches. After reading these interesting facts on yellow and blue macaw, do check out our other articles on great green macaw and tawny owl.

Humans, Hawk Eagles, Orange-breasted Falcon And Any Other Animals Or Birds, Harpy Eagles

What type of animal is a blue-and-yellow macaw?

The blue and yellow macaw (Ara ararauna) is a kind of bird which are native to Central and South America. Blue and gold macaws are known to be a very popular attraction at many national parks in these regions.

What class of animal does a blue-and-yellow macaw belong to?

The blue and yellow macaw belongs to the Aves class of animals. This means they are a bird. These are popularly known as parrots or macaws too.

How many blue-and-yellow macaws are there in the world?

An exact number of yellow and blue macaws would be difficult to find. There are efforts being made to protect this colorful bird and its habitat’s loss.

Where does a blue-and-yellow macaw live?

The blue and yellow macaw are found in the forests, especially in a seasonal floodplain forest, woodlands, and savannah of tropical south and central America. They are kept as pets and on display in various zoos and national parks around the world.

What is a blue-and-yellow macaw's habitat?

The natural habitat of the blue and yellow macaw is the rainforests of south and central American countries like Colombia, Venezuela, Peru, Brazil, Bolivia, Ecuador, Paraguay, and Panama, where the weather is warm. They are comfortable in the national parks of various countries where habitats are created to best suit these birds. Macaws eat a wide range of food products according to their habitat.

Who do blue-and-yellow macaws live with?

The blue and yellow macaws are found in pairs, family groups, or small flocks between 20-25 birds. They are comfortable with humans too. The birds are known to be a highly in-demand pet everywhere.

How long does a blue-and-yellow macaw live?

The blue and yellow macaw birds live for 30-35 years. They are known to survive for almost 60-65 years when they are kept as pets. If the birds are given a fairly clean and hygienic environment with healthy food and caretaking, this leads to a healthier, better and longer life.

The blue and yellow macaw mate for life as they develop sexual maturity soon as they reach two to three years. They make a nest out of dead palms, mostly using mauritia flexuosa palms. The female lays two or three eggs and incubates the eggs for about 28 days. Out of the two or three chicks, one is the dominant one that gets most of the food, and the others perish in the net. Chicks develop wings 97 days after their birth. The chick leaves the parents' side after almost a year.

The conservation status of the blue and yellow macaw is of the least concern. But the clearing of the habitat of the bird and constant human intervention has led to the fluctuation in the population of the birds. The birds being popular as a pet has led to the export of birds, albeit illegally.

The blue and yellow macaw are one of the most vibrant, colorful birds. They are known for their ability to pick up human speech and imitate it.  They have rich aqua blue feathers all over their body except the face and head which has lime color. Their front is mostly deep yellow or light orange while their feathers are blue and yellow. They have black-colored beak, talons, and blackish gray-colored feet. Their beak is powerful enough to break nutshells. Their majestic and colorful tail feathers give them a royal look.

The blue and yellow macaws are the cutest looking birds in the world. They have a wingspan of 4 ft and a body length of 3 ft, which makes them look majestic and beautiful. Their appearance is enhanced significantly because of their tail feathers.

We are well aware that they can mimic human speech. They don't really talk but can make the same sound and repeat words. They make a lot of screeching noises and are known to 'scream'  for attention. They are known to fluff their head and facial features and blush to communicate their emotions.

How big is a blue-and-yellow macaw?

The blue and yellow macaw is a large bird with a length of two to three ft. They have large wings too with a wingspan extending up to 4.5 ft. They are bigger than average birds.

How fast can a blue-and-yellow macaw fly?

The blue and yellow macaw can fly up to a speed of 35 miles per hour. They fly with their mate close together, with their wings almost touching.

How much does a blue-and-yellow macaw weigh?

The bird weight range varies between 2-2.5 lb. This also makes them one of the larger members of their macaw family.

What would you call a baby blue-and-yellow macaw?

The baby blue and yellow macaw is called a chick. This adorable chick takes some time to grow and develop wings. It takes around 90 days to develop fledge.

Macaws are extremely messy eaters with strong beaks who eat a range of food products. The blue and yellow macaw eats seeds, nuts, and fruits. They like eating seasonal fruits and vegetables. They eat clay to neutralize the toxins they have ingested while eating some fruits and vegetables that are not suitable for them. For the domesticated macaw, you can feed them the pre-mixed pallets comprising seeds, which fulfills all the nutritional needs.

The macaws are not dangerous, but they can be destructive. Due to their strong beak, these parrots have the tendency to chew on things. If you keep them as pets, you must clean their aviary on a regular basis. Biting and chewing is part of their natural behavior. You may need to train them not to indulge in these things.

The macaws are intelligent, friendly, curious, playful, and have a mild temper. They love to socialize and are comfortable staying with humans. Training them from a young age will help them settle better with you. They do make a lot of noise and try to mimic human words which needs to be considered before keeping  them as pets. Another thing is they have a long life span almost similar to humans, which is an important thing to consider in case the owner passes away.

The blue and yellow macaws are considered the most beautiful and recognizable species after the red-colored species of macaws.

They play an important part in maintaining their natural habitat, which is the rainforest. They do so by dropping a lot of seeds and fruit eaten by them.

If you wish to have this bird as a pet, you must build a large space as their home or aviary as they are a large bird and require the extra space.

It would cost around $1200-$1500 to buy a blue and yellow macaw. Blue and gold macaw can be bought or adopted from a local avian-only retail store or a certified breeder.

Here at Kidadl, we have carefully created lots of interesting family-friendly animal facts for everyone to discover! Learn more about some other birds including secretary bird, or carrion crow.

You can even occupy yourself at home by drawing one on our hummingbird coloring pages.