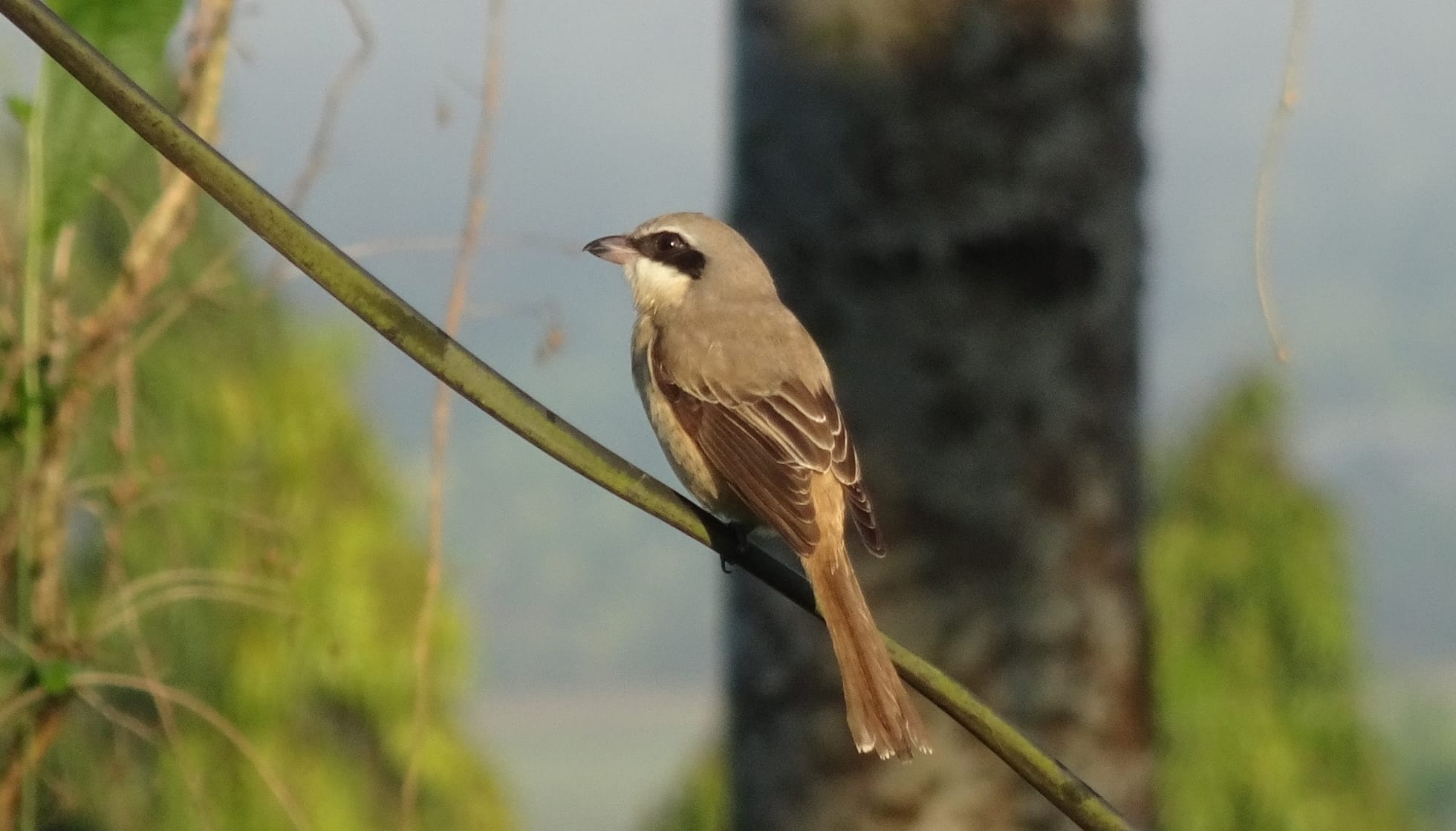 The brown shrike (Lanius cristatus) is a species of shrike birds in the family Laniidae of the order Passeriformes. These birds are mainly found in Asia and are known to be migratory birds. The genus Lanius is derived from the Latin word meaning 'butcher'. These birds are given this name because of their feeding habits. The second part of the name shrike refers to the shrill call of this species. The hunting technique of this bird species is quite unique as they observe from a perch and fly down towards the ground after the prey is spotted. These birds are somewhat similar to North American shrikes but are known to spend less time conspicuous in the tree.

There are four subspecies known of brown shrike birds. They are L.c. cristatus, L.c. confusus, L.c. superciliosus, and L.c. lucionensis. All these subspecies are found in Asia, however, these birds are sometimes found as vagrants in North America and Europe. They are usually found breeding in the North American boreal forest and snow forest, often known in North America as taiga. The bird breeds in northern Asia, while it is found in South Asia during the winter season. Some have also been found wintering in central California. The nest is built in a tree or bush.

These birds have brownish upperparts and a black mask that makes this species look incredible. The dark coloration near the eyes is the differentiating feature of these birds. An adult male's crown and upperparts are colored dark brown. The bird is said to be quite loud and the calls are quite prominent. The song is a series of different high-pitched calls.

What type of animal is a brown shrike?

The brown shrike is a bird species in the family of shrikes found in Asia. It is part of the family Laniidae.

What class of animal does a brown shrike belong to?

The brown shrike (Lanius cristatus) is a part of the order Passeriformes in the class of Aves of the kingdom of Animalia.

This bird species is known to be closely related to red-backed shrike birds and Isabelline shrike birds found in the world.

How many brown shrikes are there in the world?

The population of these birds is not known. Due to the habit of migration, the distribution range of this bird species is quite large and the extent of occurrence is 9073400.7 sq mi (23,500,000 sq km). Due to this large distribution, there is no immediate danger to the species currently. However, the population of shrikes seems to be decreasing.

Where does a brown shrike live?

Brown shrikes are birds found mainly in Asia. The bird breeds in northern Asia in Mongolia and Serbia while they spend the winter months in Myanmar and the Malay Peninsula, South Asia. These are migratory birds and are often found wintering in the North American region of central California. The subspecies known as Superciliosus, also known as the Japanese shrike, have a breeding range in the islands of Sakhalin, Kuril, and Japan. They are found wintering in Hainan, Java, Sumatra, and the Sundas. The subspecies Lucionensis, known as Philippine shrike, has their breeding ground in Korea and eastern China. They are found wintering in Taiwan and the Philippines. They also are known to spend their winters in the Andaman Islands and in peninsular India. Some researchers even found these birds breeding in the Cachar hills of Assam in India.

Vagrants have been seen in the North America regions of United States and Canada. These shrike birds are rare in Europe. This bird is also found to breed across central and eastern Asia and spend the winter in south India, Southeast Asia, and Indonesia.

What is a brown shrike's habitat?

The habitat of brown shrikes includes forest edges, vegetated riparian areas, brushy thickets, and forest clearings. The range also includes open scrub habitats where the birds are found perching on the top of thorny bushes and trees in search of prey. Unlike North American shrikes, these species do not stay conspicuous in their perches.

Some populations are found in temperate Asia which migrate to their winter regions in tropical Asia.

Who do brown shrikes live with?

Shrikes are usually known to live in groups of six or more pairs. They are very territorial.

How long does a brown shrike live?

The lifespan of the brown shrike is not known. Shrikes are usually known to live for about seven years. However, the range is four to 12 years of age.

The breeding season varies from place to place, but usually, eggs are laid in the spring season by the female species in May or June. A single brood is given birth to each other. The female is also known to lay a replacement clutch of eggs if the first one is destroyed. A clutch of two to six dark-colored spotted, reddish-white to greenish or buffish eggs is laid by the female in the nest. Both male and female adults prepare the nest. The nest of this species is a cup-shaped structure made with grass, leaves, moss, and twigs. The nest is usually placed high above the ground in a tree or small bush. The female incubates the eggs for 12-14 days and the male feeds the female in the nest during this period. Chicks remain in the nest for 14-15 days and are fed by both parents. Even after fledging, they remain near the nest for around two weeks.

The conservation status of the brown shrike (Lanius cristatus) is categorized as Least Concern by the IUCN Red List. Even when the population is decreasing, the range is quite big for this species to be considered vulnerable currently.

The brown shrike (Lanius cristatus) has a rufous-brown crown and nape. The upperparts are slightly dull in color with a brownish coloration. The upper-tail coverts and rump are brighter than the upperparts and are colored pale-brownish gray. A dark brown coloration is seen on the upper wing which has its inner flight feathers with white edges. The tail is colored dull rufous and the underparts are usually whitish. A black facial mask from the lores through the eyes is seen. A broad white supercilium is also seen. A creamy-white coloration is seen on the lower forehead. These birds have hooked bills that are colored black. The eyes are brown in color and the legs and feet are blackish.

Non-breeding adults have dull-colored bills with pink bases. Juveniles are much duller in color.

Its small size, beautiful coloration, and black mask make the brown shrike a very pretty bird. They are considered quite cute.

The song is the perfect way to describe the communication method of the brown shrike. Away from the breeding grounds, these birds are quite silent. During the breeding season, the song is often a high-pitched squawking. It is a rich, varied chattering, a repeated trilling 'kichi-kichi-kichi'. Males often mimic the songs of other birds.

How big is a brown shrike?

How fast can a brown shrike fly?

How much does a brown shrike weigh?

Males and females of these birds are not given different names.

What would you call a baby brown shrike?

They are known to feed mostly on insects, small rodents, and small birds. They perch on top of thorny bushes and trees, and dive to the ground to catch their prey.

In general, shrikes are known to feed on insects and vertebrates. Their diet includes spiders, lizards, mice, grasshoppers, and small birds. They are also known to feed on small rodents and snakes.

These birds are not considered pets as they thrive in wild habitats.

A shrike bird was given this name because of their shrilling calls.

A brown shrike is not considered endemic.

Do all shrikes impale their prey?

All shrikes are known to impale their prey. They grasp the kill with their pointed beak and are known for pinching the spinal cord to induce paralysis. They vigorously shake their prey to break the neck.

Yes, they are migratory birds. They always return to the same wintering grounds every year. These migratory birds are known for their migration south to India, Southeast Asia, and Indonesia in winters.

Here at Kidadl, we have carefully created lots of interesting family-friendly animal facts for everyone to discover! For more relatable content, check out these Amazon parrot facts and mealy parrot facts for kids.

You can even occupy yourself at home by coloring in one of our free printable shrike coloring pages.