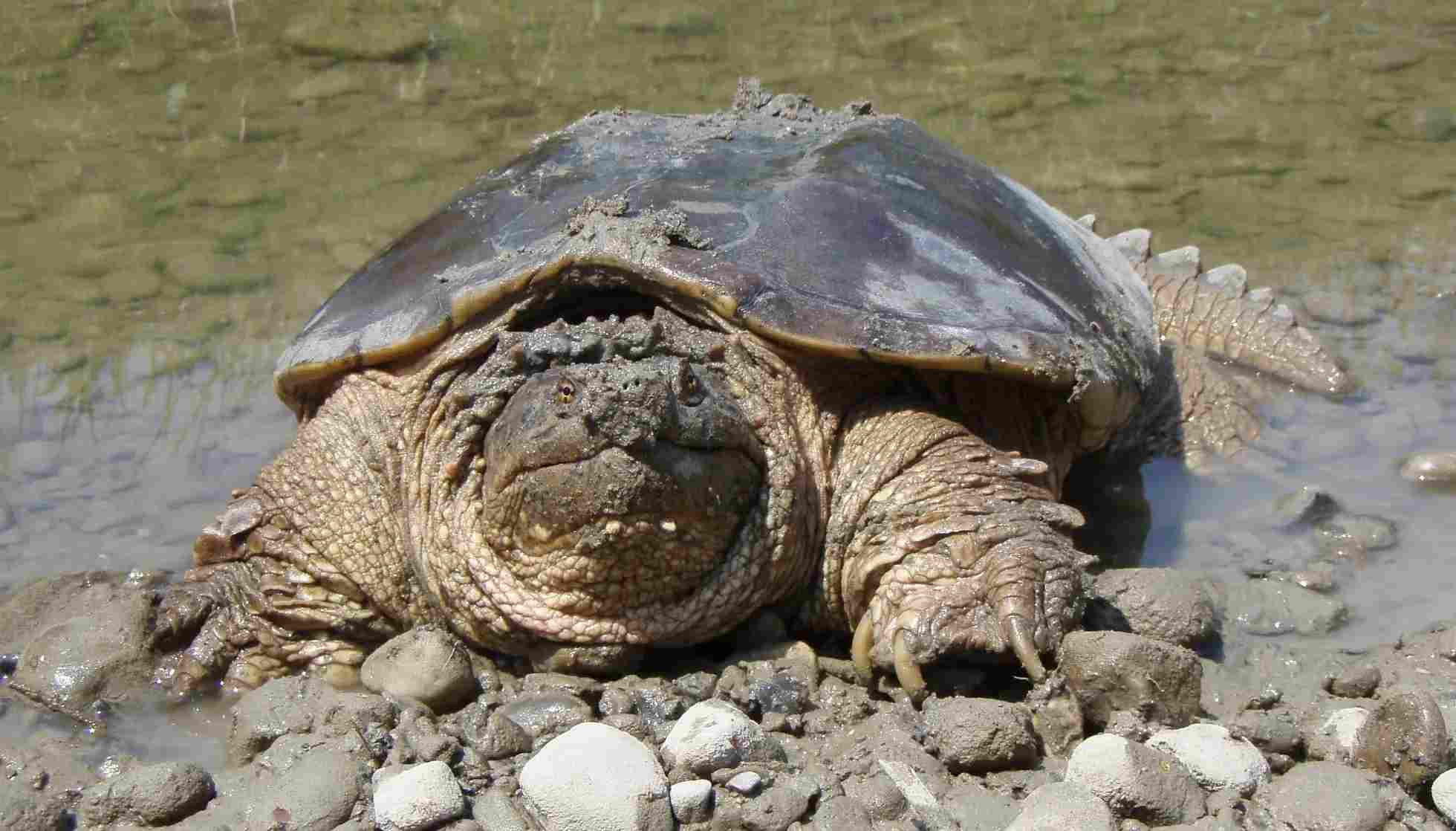 The common snapping turtle, Chelydra serpentina, is known to belong to the freshwater turtle category. These turtles favor water more than land and can stay underwater for around 50 minutes in a go. These turtles are curious and want to know more about strange creatures in their surroundings. Due to this nature, they are also considered sharp species. The male population might end up getting aggressive and territorial. One can distinguish this species from other turtles with the help of their dark and smaller shells as well as their long tails.

This range of turtles is usually active during the nighttime and are also seen searching for food or fish, biting onto the aquatic vegetation during this time. Otherwise, these animals are also known to be active during the breeding season. Here's a fun fact - these turtles have flexible neck and head, which can be extended up to 19 in (48.3 cm), which might be equal to the length of their own body at times. Read on to know more such fascinating facts!

For more interesting facts about other turtles check out the ornate box turtle and green sea turtle.

What type of animal is a common snapping turtle?

These snapping turtles are aquatic turtles belonging to the Chelydridae family of animals.

What class of animal does a common snapping turtle belong to?

This water snapping turtle belongs to the reptile class of animals.

How many common snapping turtles are there in the world?

These turtle populations have the Least Concern natural status of conservation. They are commonly seen in New York, South Carolina, and many other cities. Their exact population status is not known to humans.

Where does a common snapping turtle live?

This range of aquatic animals is mainly found in China, eastern North America, and Japan. Their population is usually spotted in New York, eastern Canada, South, and North Dakota, West Virginia, Mississippi, North and South Carolina, Georgia, Alabama, Texas, and many other places.

What is a common snapping turtle habitat?

These aquatic turtle populations have their natural habitat in brackish water and freshwater rivers, ponds, and streams. A few of them are often found in the temperature-dependent habitat that focuses around the shallow waters. These snapping turtles are seen buried in the mud of the shallow water. Their populations also prefer a habitat range around the marshlands and in the swamps.

Who do common snapping turtles live with?

These water snapping turtles have a solitary behavior. This is mainly because their social interactions with others from their population end up with aggressive outcomes. Hence, these snapping turtles do not engage socially.

How long does a common snapping turtle live?

These snapping turtles have a good lifespan of 30 to a maximum of 40 long years.

There are no records of how adult males and females interact or choose their partners. Over the years, it is observed that the breeding season for snapping turtles occurs between April and November. A majority of the females are known to lay their eggs in June and July.

After the male and female mating process is complete, the female is known to lay minimum of 20 to a maximum of 80 eggs. The female travels out of the aquatic range to the land and digs in the sand or mud to make a depressed nest for these eggs. The hatching span for the eggs is temperature-dependent. That means the incubation period depends on the warmth of the nest which may range between 9-18 weeks. After that period, the eggs hatch and these young hatchlings try and head to the water after leaving the nest. The hatchlings stay in the land nest throughout winter, if the eggs hatch in the winter season.

The conservation status of the common snapping turtle, Chelydra serpentina, is Least Concern according to the International Union for Conservation of Nature (IUCN).

Snapping turtles have a long tail. Their tail is usually equal to the length of their carapace, meaning their upper shell. This plastron or the carapace is quite smaller in comparison with their whole body and its color ranges from brown to tan to a dark black. As these snapping turtles cannot hide inside their shells completely, they have strong jaws that help them in combat. They have a highly flexible head and neck that helps them to snap at their prey in the water especially the fish or any other aquatic organism in motion. They usually have yellow-colored necks and legs with a dark head and shell. The males have a bigger body than the females.

This common snapping turtle, Chelydra serpentina, is quite often seen buried in the mud and might look huge a shabby, with strong jaws. Considering these reasons, the snapping turtles cannot be categorized as cute.

These snapping turtles are tactile in nature and the mates usually communicate with each other through leg and body movements. In case of catching prey, the snapping turtles use their visual aid. They are also known to sense their prey with the help of the chemicals and the vibrations that occur in the water surroundings.

How big is a common snapping turtle?

How fast can a common snapping turtle run?

As these snapping turtles are bulkier in size their average running speed on land is 2 mph (3.2 kph). They are considered good with water, which helps them to swim and travel with a range of 10-12 mph (16.1-19.3 kph).

How much does a common snapping turtle weigh?

These snapping turtles have a range of small to huge body structures in their populations. Hence, their weight range can be marked between 10-35.2 lb (4.5-16 kg). There have been cases where the snapping turtles may have been overfed in captivity. Hence, the heaviest specimen of this species recorded is 86 lb (39 kg).

The snapping turtles are differentiated with their common noun as males and females. Hence, they do not have specific names based on their gender.

What would you call a baby common snapping turtle?

The young babies of these snapping turtles are called hatchlings.

The species of snapping turtles are omnivorous in nature. Their diet includes a lot of aquatic vegetation like grasses and plants in the water as food supplies. These snapping turtles are also known as predators in the wild. This is because a huge portion of their diet consists of small fish, mammals, and birds. They might also consider the bird eggs and carrion as a part of their food supplies.

Although these snapping turtles are not poisonous, they do impose danger to humans as they might attack under some conditions.

These predators of fish and other small animals find it difficult to stay in captivity due to their specific temperature, food, and habitat requirements. Even still, there are many records of people keeping this species of snapping turtles as pets. This can be a success if they are taken good care of and provided favorable habitat conditions.

Many animals prey on snapping turtles. The list of these predators consists of foxes, great blue herons, bullfrogs, raccoons, crows, and water snakes. These species of turtles have a smaller carapace and their shells don't help them to completely cover themselves from their predators. Hence, their aggressive behavior is what they use against the predators. These turtles are known to fight against their predator with the help of their powerful jaws to protect themselves in the natural surroundings.

Even though the conservation status of this animal is stated as Least Concern, the nature care units have observed a considerable drop in the number of these individuals over the years. The changes in their habitat, their trade for pets, and keeping them as species for observations in museums and other places are the reasons for this considerable decrease in their number. This has resulted in making them a group of special concern, especially in Canada.

Although there haven't been any human deaths reported because of the snapping turtles, there have been incidents of humans that were severely injured by these animals. The aggressive nature of this range of species makes the snapping turtle dangerous at times. They can bite off a human finger or a toe in their rage of aggression.

Here at Kidadl, we have carefully created lots of interesting family-friendly animal facts for everyone to discover! Learn more about some other reptiles from our California kingsnake fun facts and scarlet snake facts pages.

You can even occupy yourself at home by coloring in one of our free printable common snapping turtle coloring pages.