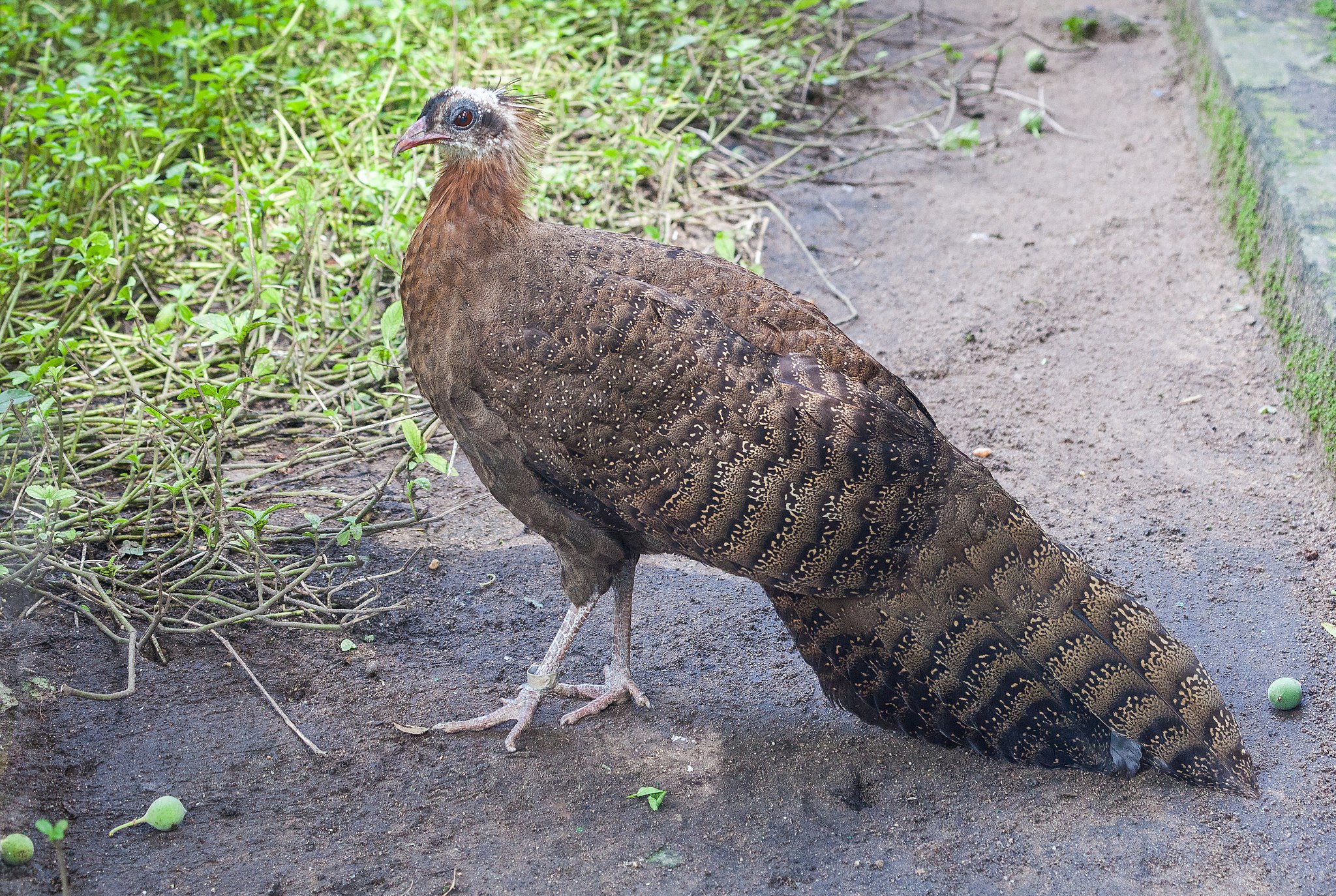 The crested argus is a large, brown bird that belongs to the pheasant family and genus Rheinardia. Found in the Southeast Asian nations of Laos, Malaysia, and Vietnam; these birds are excessively shy and solitary. Further, they are endemic to the countries of their origin.

Scientists Jonathan Eames, Ben King, and Frank Lambert were believed to have worked a lot on this spectacular bird with a large tail and small feathers on its crest. Apart from their spectacular plumage, the males of their genus are also noted for their piercing and loud calls during the breeding season.

The population of this wild bird is constantly threatened by the destruction of their natural habitat range in Malaysia, Vietnam, and Laos. Apart from that, their population in the wild is also threatened due to hunting activities. Keep reading for more amazing facts about the crested argus!

If you like this article about crested argus facts, also check out the other articles with some great facts about palm cockatoo and red backed shrike.

What type of animal is a crested argus?

The crested argus (Rheinardia ocellata) is a type of bird that belongs to the pheasant family.

What class of animal does a crested argus belong to?

The crested argus (Rheinardia ocellata) belongs to the class Aves of animal and genus Rheinardia.

How many crested arguses are there in the world?

According to the latest round of data collection, there population range of mature crested arguses in the world currently falls between 6000-15000 individuals.

Where does crested argus live?

The crested argus range map is restricted to southeast Asian countries like Laos, Malaysia, and Vietnam. It is endemic to the countries it is found in.

What is a crested argus's habitat?

The preferred habitat of crested argus is in the evergreen, tropical forests of the Southeast Asian part of the world it is found in, being endemic to those regions.

Who do crested arguses live with?

Not much data is available on the social behavior of crested arguses although they have been noted to fly together in pairs.

How long does a crested argus live?

There is not much data available on the crested argus lifespan or crested argus average lifespan. However, the lifespan of an argus pheasant has been recorded to be approximately 20 years in captivity.

The small crested argus is known for its unique courtship rituals during the breeding season. The males spread their crest and ruffle the feathers on their heads while dancing to attract males for breeding.

Once the male pheasants attract mates with the help of dancing with their feathers spread out, the two look for steep slopes in order to build their nests with leaves. After the eggs are hatched, the birds feed the nestlings with the help of their pink bill. The males also sometimes help in the rearing of the chicks.

According to the International Union for Conservation of Nature (IUCN) Red List, the crested argus has been listed under the category Endangered.

The crested argus (Rheinardia ocellata) is a brown colored pheasant of a large size. The male is larger than the female bird and more distinct looking due to its plumage.

The male bird has a huge tail of 12 feathers along with a white mark around its eye. The female has a smaller tail with a long, thin neck. Both the male and the female have plumage the color of spotted dark and light brown and they have a pink bill. However, the plumage of the female bird is darker than the plumage of the male. Their head is smaller compared to the rest of the body while there are some white feathers on its head.

*Please note that the picture is of great argus and not crested argus.

The crested argus is not a very cute bird to look at but they are definitely very unique! With their unique crest, pink bill, and the large white mark around their eye, the adult pheasants look quite different and distinguished from the other birds in Southeast Asia. If you look at some crested argus pheasant images, you will see their charm as well.

This bird species mostly communicates through calls and sounds. The adult male birds have a loud call during the breeding season. For the rest of the year, they either let out a long whistle or make clucking noises.

How big is a crested argus?

How fast can a crested argus fly?

Even though the exact speed of the flight of this pheasant bird has not been estimated, they are known to be quite strong fliers.

How much does a crested argus weigh?

The average weight of the crested argus is estimated to be around 3.3 lb (1.5 kg).

There are no unique names to refer to the males and females of this pheasant bird species found in Malaysia, Vietnam, and Laos in Southeast Asia. Consequently, they are called by their usual name and are simply referred to as a male or female crested argus.

What would you call a baby crested argus?

There is no separate, distinct name to refer to a baby crested argus. Therefore, following the usual terminology, it is referred to as a crested argus pheasant chick.

The crested argus would not make a good pet at all just like the golden pheasant. These shy and elusive birds prefer their own habitat in the wild which cannot be replicated at home. In addition to that, they are also endangered according to the IUCN Red List.

During the rainy season, these birds get up on the tallest trees seen above the forest canopy and stay there for days! Normally, these birds use those trees as shelter but during the monsoon, they do not come down from the trees for many days.

How many eggs do they lay and how long until they hatch?

The female crested argus hatch rate is quite low. It is known to give birth to a small clutch of eggs, comprising of one to two eggs. These eggs start hatching after 25 days.

Like other chicks in their species, the crested argus chicks are also born with their wing feathers already developed.

Yes, the crested argus has been listed as Endangered according to the IUCN Red List. This species is threatened by a reduction in its habitat due to the continued deforestation of tropical, evergreen forests. In addition to that, the species is also threatened by hunting by humans in Southeast Asia.

It has been difficult to conduct conservation projects for this wild bird who is also believed to be extremely shy and elusive. However, the Saigon Zoo in Vietnam and the Wildlife Department of Malaysia in Sungkai have undertaken two projects to try and conserve this wild endangered species.

Here at Kidadl, we have carefully created lots of interesting family-friendly animal facts for everyone to discover! Learn more about some other birds including hummingbird facts and whiskered treeswift facts pages.

You can even occupy yourself at home by coloring in one of our free printable crested argus coloring pages.