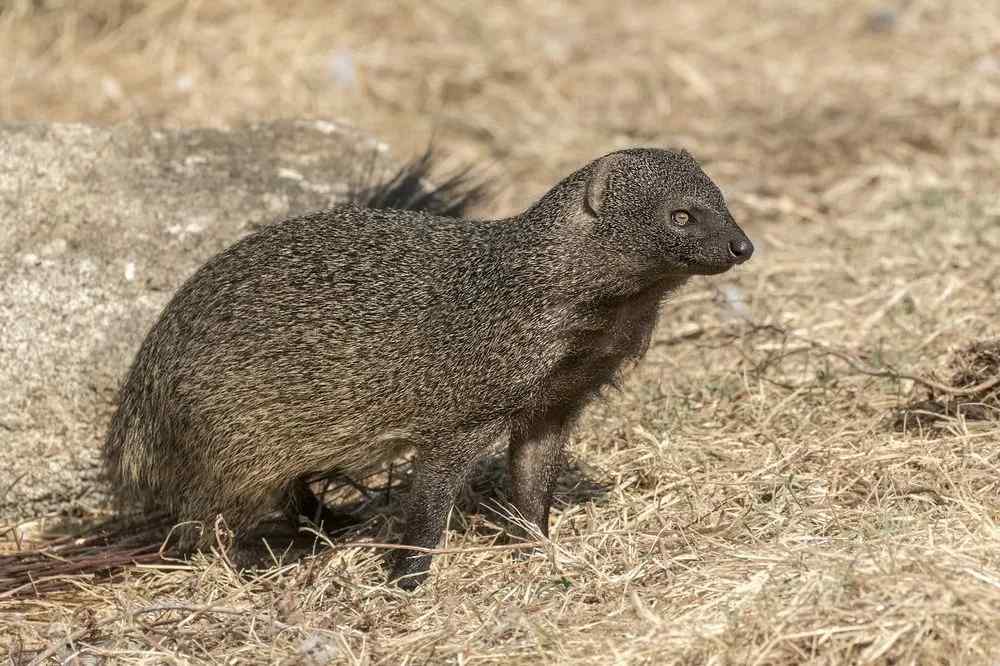 The Egyptian mongoose (Herpestes ichneumon) is primarily found in Spain, Israel, Portugal, southern Turkey, Egypt, and a few southern African countries. The species is also known as ichneumon. The average weight and length of the mongooses are 3.7–8.8 lb (1.7–4 kg) and 18.8-23.6 in (48–60 cm), respectively. The species belongs to the Herpestes genus.

The Herpestes ichneumon, Egyptian mongoose, has long furs either of gray or reddish-brown color with yellow and brown spots. The species has a long and bushy black tail, unlike the lean body. The short legs have five digits on each of the limbs.

These mammals prefer to live near coastal areas, rivers, and lakes and are found in marshes and swamps. They either make their shelter in burrows or find a place in hollow logs. The mongooses are carnivores and generally prey on rodents, fish, birds, reptiles, amphibians, and insects. It is also said that they prey on the eggs of crocodiles. Some even eat insects by sniffing the surface of the ground.

The International Union for Conservation of Nature has listed the species in the Least Concern category.

What type of animal is an Egyptian mongoose?

The Egyptian mongoose is a carnivore mammal and a species of mongoose primarily found in North African countries such as Egypt and parts of South America as well as Spain and Portugal. Egyptian mongooses generally prey on rodents, fish, birds, reptiles, amphibians, and insects.

What class of animal does an Egyptian mongoose belong to?

The Egyptian mongoose's scientific name is Herpestes ichneumon, and the species belongs to the class of mammals, the family Herpestidae and the Herpestes genus.

How many Egyptian mongooses are there in the world?

The exact population of the Egyptian species of mongoose is not known, but the mongooses are widely distributed to several nations. Even the International Union for Conservation of Nature has declared the species as Least Concern.

Where does an Egyptian mongoose live?

The Egyptian species of mongoose are found in numerous African countries. In contrast, a huge population of these mongooses can easily be spotted in European countries such as Spain, Portugal. The species is found in southern Turkey and Israel as well.

What is an Egyptian mongoose's habitat?

These mongooses prefer to live near coastal areas, rivers, and lakes and are found in marshes and swamps. Burrows or holes also serve as the Egyptian mongoose's habitat.

Who do Egyptian mongooses live with?

Many species of mongoose are solitary and prefer to live alone, while a few studies reveal that the Egyptian mongooses live either alone or in small groups. The mongoose also hunts in small groups, and a family consists of around up to seven mongooses.

How long does an Egyptian mongoose live?

The average lifespan of an Egyptian mongoose is 12 years, but some of the mongooses live for around 20 years in captivity.

The International Union for Conservation of Species has declared the species as of Least Concern. The mongooses are also spotted in the Iberian Peninsula. But activities such as poaching or hunting have been increased over the years which could soon threaten the population of these beautiful mongooses.

Egyptian mongooses have long furs either of gray or reddish-brown color with yellow and brown spots. The species has a long and bushy black tail, unlike the lean body. The short legs have five digits. You can see the huge body of the animal. Also, the species is one of the biggest species in the Herpestes genus.

How big is an Egyptian mongoose?

How fast can an Egyptian mongoose move?

The exact speed of the Egyptian mongoose is not known, but these animals are known for their amazing predatory skills. The species also has the ability to move and react quickly.

How much does an Egyptian mongoose weigh?

There are no specific names given to the male and female Egyptian mongoose.

What would you call a baby Egyptian mongoose?

No particular name is used to refer to the babies or young ones of Egyptian mongooses. People generally call the young mongoose a pup.

These animals primarily prey on rodents, fish, birds, reptiles such as the black mamba, amphibians like the African clawed frogs, eggs of crocodiles, and insects.

Mongooses are generally not harmful to humans but are very deadly to several birds and wild animals. These mammals may also attack humans if they feel threatened.

Unlike other mammals, people generally do not keep the Egyptian mongoose as a pet. Also, the species is not very friendly with humans and could cause injuries as well. It is suggested not to keep them as pets as they primarily belong to the wild.

Unlike other mammals, mongooses possess acetylcholine receptors that help them to fight against and kill several venomous snakes. Also, they are immune to the venom released by the snakes. Several studies reveal that the species of mongoose have the ability to predict the movement of snakes and defend themselves. Mongooses don't attack snakes needlessly and mostly act in self-defense as snakes love to eat small mammals. Also, these animals are very important for the environment as they help to resist the increasing number of snakes.

With the help of archaeologists, bones dated to the first century were excavated in Spain and Portugal.

Rudyard Kipling has written a short story called 'Rikki-Tikki-Tavi' based on the adventures of an Indian grey mongoose.

The female mongoose of the Herpestes genus is smaller than the males.

What eats the Egyptian mongoose?

Here at Kidadl, we have carefully created lots of interesting family-friendly animal facts for everyone to discover! Learn more about some other mammals from our American marten facts and kangaroo rat facts pages.

You can even occupy yourself at home by coloring in one of our free printable egyptian mongoose coloring pages.