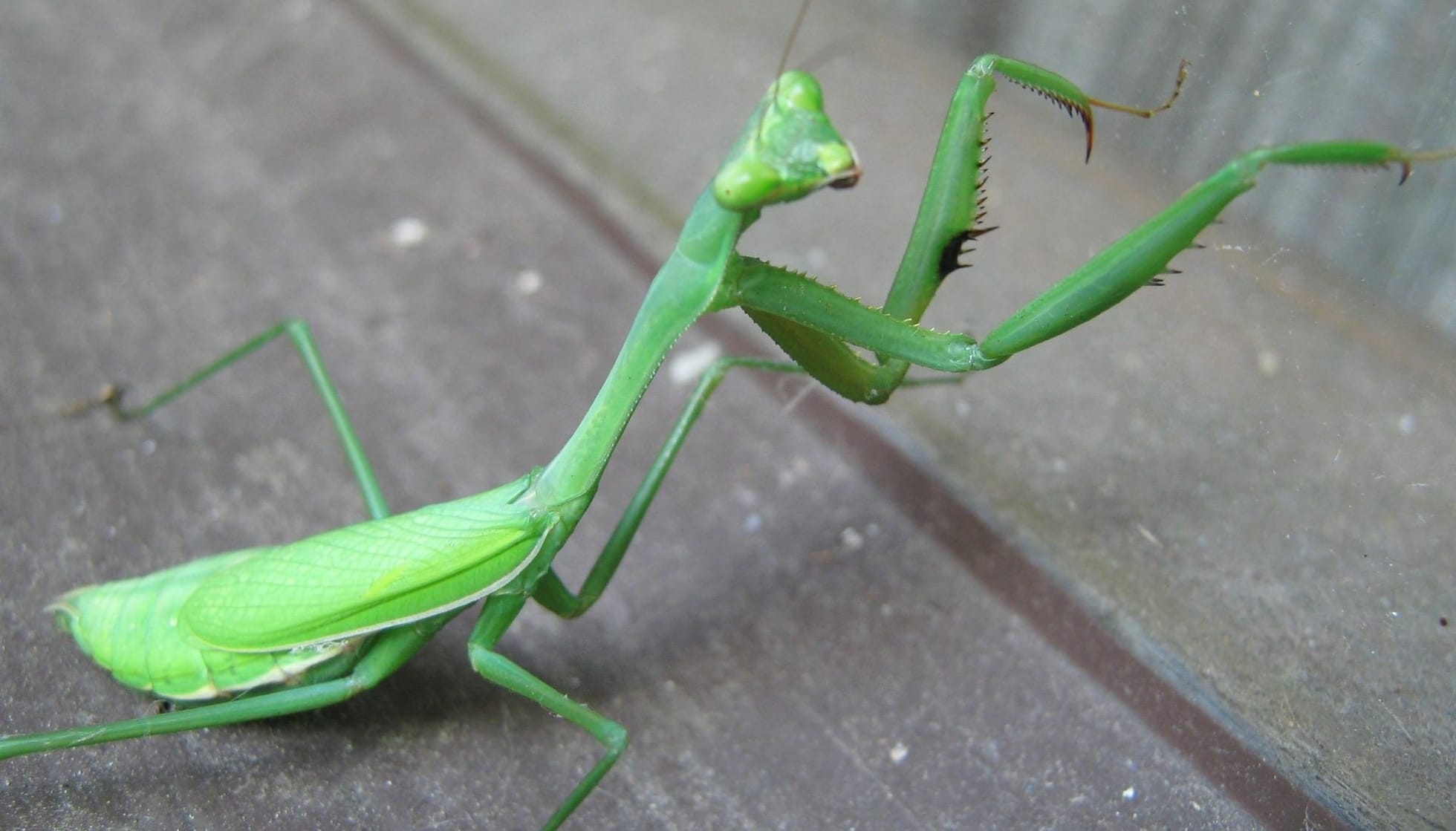 When idle, these insects have a distinctive stance with their first pair of legs (called raptorial legs) held in a position that resembles someone praying, and hence the common name praying mantis. Besides the raptorial legs that make these insects deadly and efficient predators of flying prey, the praying mantids stand out due to a pair of large compound eyes seated on a triangular head, which they can rotate a full 180 degrees! The European mantises range in color from bright green to brown, helping them camouflage efficiently with the surrounding environment.

Curious to know more about this praying mantis species? Then read on for some more interesting and fun facts about the fascinating European mantises, including their peculiar mating behavior!

If you like reading mantis facts, you can also check out articles about the Carolina mantis and rain spider from Kidadl.

What type of animal is a European mantis?

The European mantis (Mantis religiosa) is an insect. They are a mantid species of the family Mantidae and order Mantodea.

What class of animal does a European mantis belong to?

The European mantis belongs to the class Insecta of the phylum Arthropoda.

How many European mantises are there in the world?

Owing to their cryptic behavior and occurrence as local subpopulations, the exact population size of the European mantis is not known.

Where does a European mantis live?

Populations of the European mantis (Mantis religiosa) are spread throughout Southern Europe, Africa, Asia, North America, and Australia. According to recent reports, the Europen praying mantis has also been found in Germany and regions of Northern Europe. The mantids prefer warm habitats with an abundance of wild vegetation and where an abundance of prey is available for the insects' diet. The European mantids are not known to migrate.

What is a European mantis's habitat?

The European praying mantis can survive in a variety of habitats in tropical, subtropical, as well as temperate regions. This mantid species can be found in areas with lots of vegetation, preferably bushes and shrubs. They are common in valleys, gardens, and even semi-arid desert regions.

Who does European mantis live with?

The European praying mantids are primarily solitary creatures. Their cannibalistic behavior may result in these insects eating each other if kept together.

How long does a European mantis live?

The average lifespan of the European mantis species can be up to a year. The females of the species have a slightly longer life expectancy than the males.

Due to its very short lifespan, the European praying mantis mates only once, usually in the months of September and October. Courtship and copulation are two distinct events among these insects. When the adult male has reached reproductive maturity, it approaches the adult female but is quite cautious in its move because the female may attack and kill it. The female may also kill the male after copulation is over, a phenomenon known as sexual cannibalism.

Copulation ends with the male depositing the spermatophore (a mass of spermatozoa or male reproductive cells) inside the female. After this, the male retreats from the vicinity of the female as soon as possible to protect itself from being attacked and killed by the female. Post mating, the adult female produces an ootheca, an egg case that contains about 100-200 eggs. The females produce the ootheca in the form of a frothy mass that hardens to form a tough case consisting of proteins and other substances to protect the eggs inside.

The eggs develop inside the ootheca during the winter months, taking approximately three to six months to hatch. The females usually deposit the ootheca on a solid surface at a site that is sufficiently warm. All the eggs from a single ootheca hatch at the same time, usually in the morning. The first molting occurs very near to the ootheca; the emerging young nymph looks similar to the adults but is very small. During each molting stage, the nymph grows by a few millimeters, and finally, after about eight such rounds, the adult insect emerges with fully developed wings.

According to the International Union for Conservation of Nature (IUCN) Red List of Threatened Species, the European praying mantis (Mantis religiosa) is a species of Least Concern.

Like most other insects, the body of the European praying mantis has three segments - the head, thorax, and abdomen. They range in color from bright green to brown. Both the adult female and male insect have a pair of front legs (raptorial legs) that look like two arms; in the usual resting posture of the insect, these front legs give the appearance of a pair of hands joined in prayer. In addition to these front legs, the adults have two pairs of wings and four more legs in the abdominal area. The head is triangular in shape with a pair of large compound eyes and additional simple eyes. The mantid can pivot its head as well as rotate it 180 degrees. A pair of antenna on the head aids in sensory reception. A fascinating feature of this praying mantis is that it has only one ear located on the underside of its body. The presence of a single ear is a common occurrence in every insect of the order Mantodea.

The European praying mantis species is far from being cute. Even though both the male and the female mantids have a sleek and elongated frame with a bright green hue, it cannot be denied that they do look kind of gross.

The adult female and male European praying mantis mainly use visual and chemical signals to communicate with each other. The pair of compound eyes provide excellent visual abilities that allow the mantid to detect movements of both prey and potential mating partners. In addition, the capacity to move the head a full 180 degrees gives the insect an all-around vision of its environment, helping it to be aware of any nearby predator or prey. The presence of a single ear on the belly region allows the mantid to detect sounds of both high and low frequencies. Chemical cues involve pheromones that the female releases to attract the males. The praying mantis may also produce various sounds by rubbing or scrapping its abdomen and underwings.

How big is a European mantis?

How fast can a European mantis fly?

The exact flight speed of the European praying mantis is not known. However, these mantids are known to be quite clumsy fliers and cannot fly long distances.

How much does a European mantis weigh?

Mantis males and females do not have any distinct names.

What would you call a baby European mantis?

The European mantids are carnivorous insects that eat a wide variety of other insects such as crickets, cockroaches, grasshoppers, flies, moths, bees, and beetles. Mantids are excellent ambush predators and can easily capture flying prey with the help of their powerful forelegs. Strong mouthparts called mandibles help the mantid to devour its prey. These insects are also known to prey on and eat other members of their own kind.

The European mantis species is not poisonous nor dangerous to humans.

Mantids do make fascinating pets since they are relatively easy to maintain. However, it is best to buy a captive-bred mantis and not disturb natural populations.

The scientific name of the European praying mantis (Mantis religiosa) has a profound meaning. The species name religiosa comes from the insect's typical praying stance when its forelegs are folded, and the genus name Mantis is a Greek term meaning prophet.

The single ear that the European praying mantis has is capable of detecting ultrasounds. Further, the location of the ear is such that the insect is unable to figure out the direction from which a sound comes.

Although an introduced species, the European praying mantis is the state insect of Connecticut since October 1, 1977.

The praying mantids are extremely beneficial to farmers since these insects help in eliminating major pests that are harmful to crops, such as caterpillars and aphids.

The European mantis egg requires a temperature of at least 80.6 F (17 C) and appropriate humidity in order to hatch.

The eyes of the praying mantis consist of clusters of photoreceptor cells called ommatidia that aids in daylight vision.

In Germany, it is illegal to keep the European praying mantis as a pet. An assessment of 1998 categorizes the mantis as endangered on the German Red List.

Scientists have put forth two major theories behind the sexual cannibalism behavior of the female praying mantis. First, eating the mate provides an abundance of nutrients to the female, and the latter is spared of the trouble of hunting. Secondly, killing and consuming the mate right after fertilization supplies nutritional resources to the female that helps in faster production of ootheca and increasing the survival rate of the nymphs.

The praying mantis breed during the autumn or fall, which is around the month of September or October. Naturally, they will lay their eggs during those months.

What is the lifespan of a female praying mantis?

An adult female praying mantis has an average life expectancy of 11-12 months. In contrast, a male has a shorter lifespan of about seven or eight months.

Here at Kidadl, we have carefully created lots of interesting family-friendly animal facts for everyone to discover! For more relatable content, check out these tan jumping spider facts and black-legged tick facts for kids.

You can even occupy yourself at home by coloring in one of our free printable European mantis coloring pages.