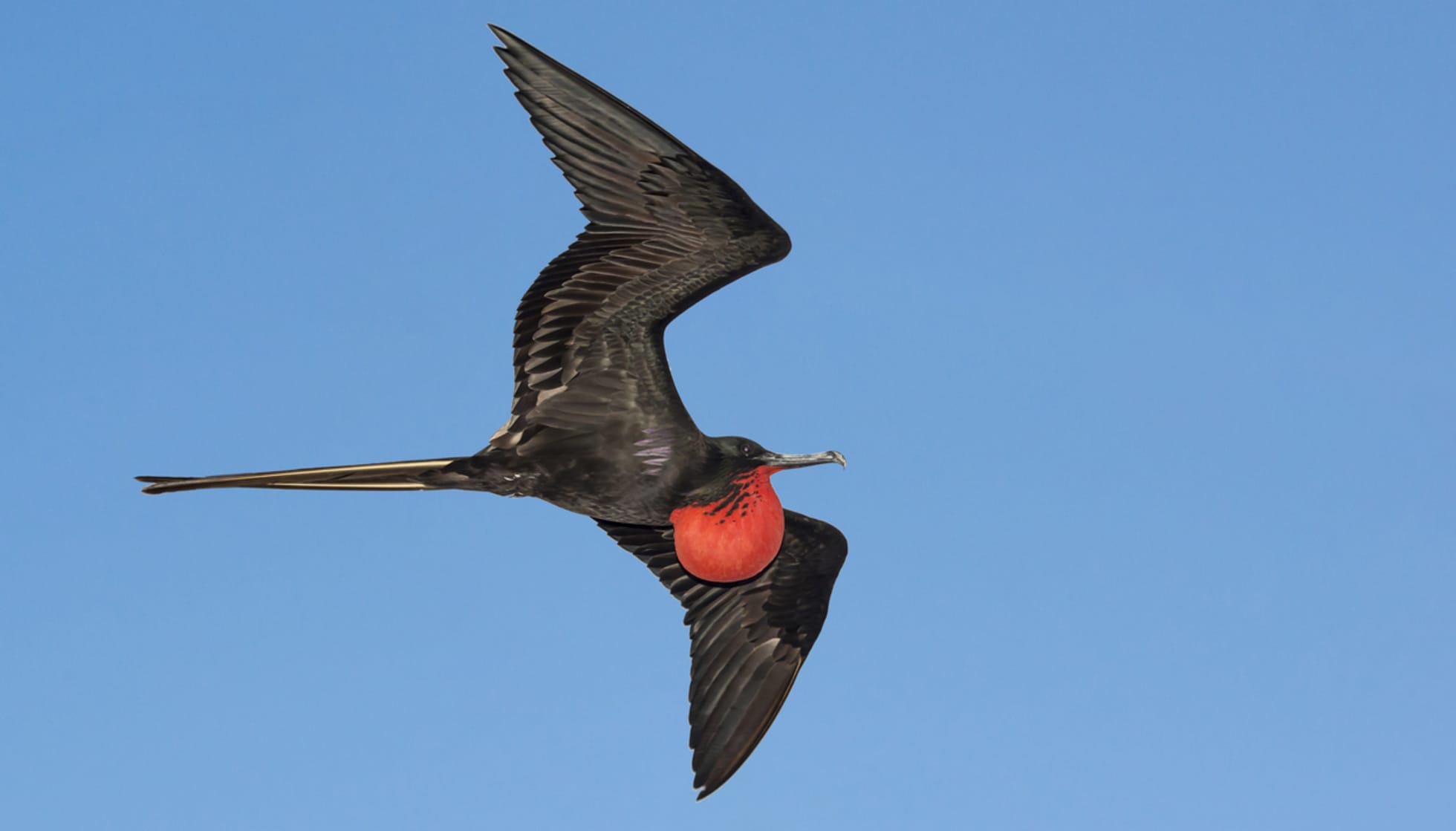 Are you a lover of speed? Do you like looking at birds zoom past you in the sky? Then the magnificent Frigatebird will soon be one of your favorite birds! These red-throated, fish-stealing, nest-making birds are well known for their large wingspan, long life, and tendency to steal from their fellow birds. The Frigatebirds are sure an interesting bunch! These species have five different subspecies, of which, the Magnificent Frigatebird is the most common, and least endangered. Other species of the Frigatebirds are endangered, and conservation efforts are underway to ensure that they make it.

Most of the species are found on coasts, where they set up a nest with their mates and wait for fish to hit the rocks. If not, they have been known to steal food from others, which is something you should absolutely never do! Are you curious about this coast bird, and do you want to know more? Then read on for your hack into the Frigatebirds. Do you want to go one step ahead and read even more? Then read on about the bird of paradise and barn owl.

What type of animal is a Frigate Bird?

The Magnificent Frigatebird (Fregata magnificens) is a type of bird.

What class of animal does a Frigate Bird belong to?

The Magnificent Frigatebird falls in the class of birds. They also belong to the order Pelecaniformes.

How many Frigate Birds are there in the world?

Based on estimation, there are roughly 140,000 Magnificent Frigatebirds across the world.

Where does a Frigate Bird live?

The  Magnificent Frigatebird lives close to the ocean. It is a seabird, and as such, can be found around tropical and can be found with nests around coasts. The rocky cliffs of any coast make a perfect place for them to set up a nest and catch fish.

What is a Frigate Bird's habitat?

Who do Frigate Birds live with?

The Magnificent Frigatebirds live together in pairs, in large colonies. Each couple has a nest of their own for breeding. After they mate, they look after the same egg, and once the chick is grown, they part ways for a new mate in the same colonies where they came from. The nest stays on, and these colonies constantly have new members coming and going through them.

How long does a Frigate Bird live?

The Magnificent Frigatebirds live for 15-25 years which is a relatively long life span for this species.

The Magnificent Frigatebirds breed with their mate during the breeding season. The female Frigatebird then lays a single egg, which is incubated by both the parents. Unlike many other birds, they do not lay multiple eggs but rely on a single egg. If the egg is unable to hatch, the couple tries again in the same year.

The Magnificent Frigatebirds are currently marked as Least Concern, but there are other species of the Frigate bird that are endangered and in need of conservation. The Christmas Frigatebirds, for example, are Critically Endangered, which means they are very close to going extinct themselves. Even the Ascension Frigatebird has been known to have a declining population and has been tagged as Vulnerable by the IUCN Red List.

The Magnificent Frigatebird is a seabird exhibiting sexual dimorphism. The male Frigatebird has black feathers with a bright red throat pouch. The female is larger and has brown feathers with no pouch. Both, the male and the female, have a deeply forked tail that helps them maneuver with speed and ease. This deeply forked tail is the key to helping them snatch fish and other meals from other seabirds. They have wide wings, which span up to 8 ft. ‍

They may be unconventional birds, but Magnificent Frigatebirds are definitely cute. The males have a bright red throat pouch, and the females do not but they look adorable nevertheless. Be careful not to get too close though, because as seabirds, they have a sharp bite.

The Magnificent Frigatebirds communicate by cawing and cooing, but only if it is absolutely necessary. They try not to be too loud and spend most of their lives in silence. Occasionally, some Frigatebirds have been heard cawing and croaking when in flight, but never when they are on land, or in their nests. The chicks, on the other hand, can be louder, especially when waiting for the females or males to feed them.

How big is a Frigate Bird?

The Magnificent Frigatebird is 33-45 in long. Their wings, however, are immense, reaching up to 8 ft. This is twice as big as the height of a human child! The males are always on the smaller side, whereas the females are about 1.25 times as big as the males. This difference in the size of the Frigatebirds is called Sexual Dimorphism which means a variation in shape according to sex.

How fast can a Frigate Bird fly?

How much does a Frigate Bird weigh?

What would you call a baby Frigate Bird?

Though there is no specific name for a baby Frigatebird, you can call it a chick (or chicks) as per general bird terminology. But if you visit a Frigate Bird Sanctuary, chances are, the observers have already given the little chicks good names. These names are then used to track them as they grow up, ensuring that they lead a good life, and using that information to tell you more about them.

They feed on a variety of animals. Like seabirds, they get most of their food supply from the oceans. But since they are not water-proof (and can get wet, lose flight, and fall into the ocean), they need some other way of acquiring food. So they end up stealing the food from other birds who can dive into the water and catch sea animals. As a result of this case of food stealing, the Magnificent Frigatebird can feed on tortoises, squids, jellyfish, fish, eels and smaller snakes, and other creatures.

They are dangerous, but only to their fellow seabirds. Since the Magnificent Frigatebird feeds on stolen food, they are a threat to other seabirds who actually catch the food in the first place. These tendencies of the Fregatidae family make them a threat to the seabirds around them. And they are mostly harmless for humans too, unless you are holding anything they think they can eat.

In short, no. The first reason is that they are simply too huge to be kept comfortably in an indoor space. With a wingspan of more than 8 ft, it is obvious they would want more space in their habitat. Secondly, their dietary and food requirements can be expensive for a family to keep up with. Thirdly, owning a majestic Frigatebird is illegal in many countries across the world.

The word  of the family Fregatidae and "Frigate" comes from the French word for "Fast Warship." This is why mariners used to call the great Frigatebirds "Man-of-War" birds. Another connection is often made of their nature as thieves, and their tendency to steal from many a breed of seabirds. This is applied to all other breeds of the Frigatebird, all of whom live on a tropical coast (such as Florida). They include birds like the Great Frigate Bird (Galapagos.)

Why do Frigate Birds fly so high?

The Magnificent Frigatebird has been recorded flying more than 500 km in search of food and can spend months up in the air. This means they have to conserve energy when flying. This is why they fly high, so they can take advantage of the strong drafts of air, and simply glide their way through the air instead of actually putting in the effort. It allows them to fly for long periods of time over the ocean and other water bodies without getting tired. They also sleep while flying, keeping one part of their brain at rest and keeping the other functional enough to handle the flight without falling out of the sky. The Frigatebirds sure know a thing or two about multitasking!

Why do Frigate Birds puff up?

The males of the species puff up to attract females. The bigger their throat pouch, the more desirable they are thought to be. This is why during mating seasons, the males fly underneath the females, puffing up their chests so their throat pouch is expanded to capacity. If the female likes the male, she will go with him to his nest. They can then be seen breeding, after which the females and the males look after the baby together.

You can even occupy yourself at home by drawing one on our Frigate coloring pages.