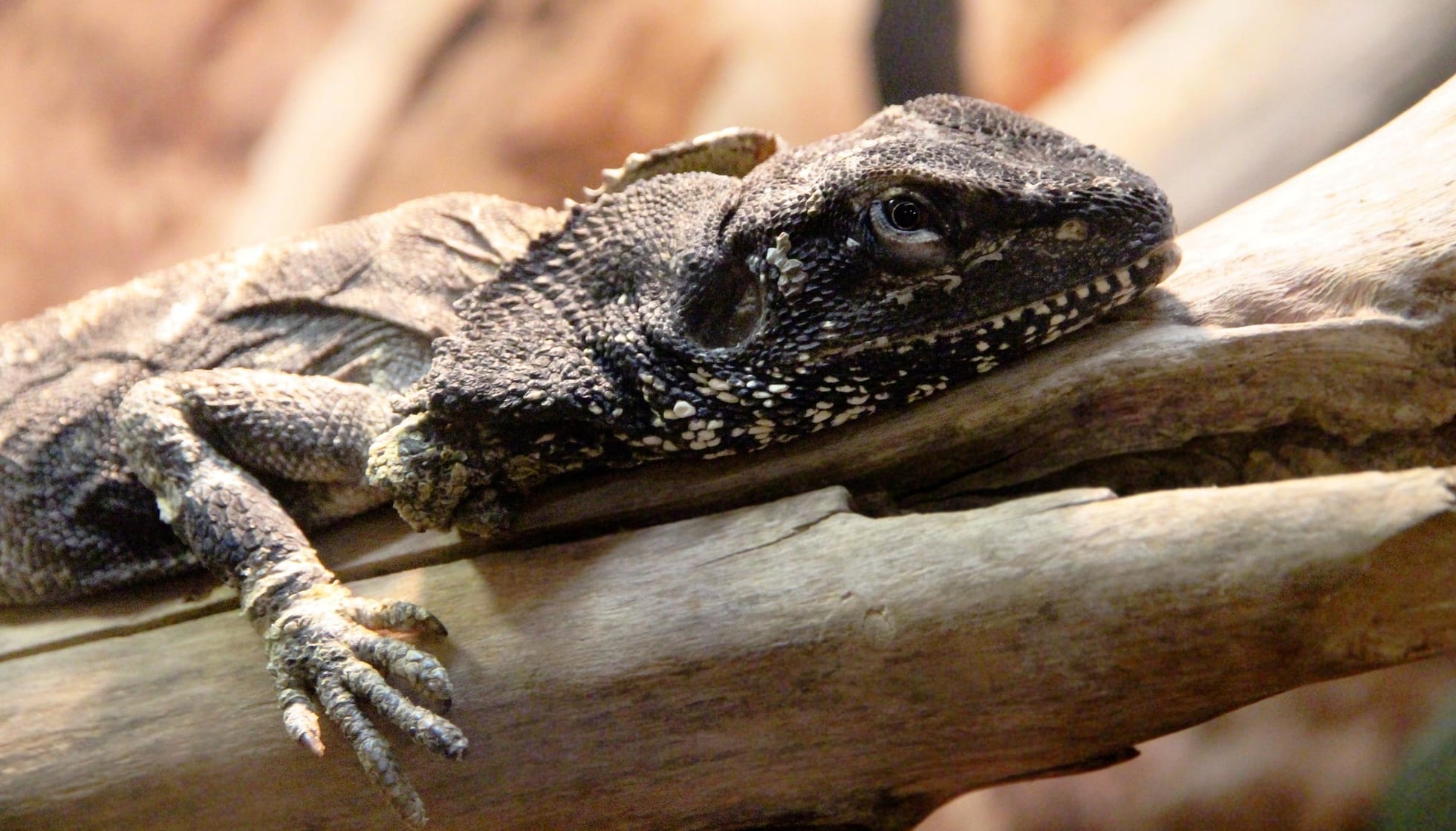 Frilled lizards (Chlamydosaurus kingii) belongs to the family Agamidae. They have very strong hind legs and are endemic to northern Australia and southern new guinea. The lizards are known for their attractive pink or yellow frills that are present around their neck. They are not on the verge of extinction, and their conservation status is of the least concern. These species lay about 12 eggs after one breeding season. Frilled lizard running speed can go up to 30 mph when confronted by any of the main predators. These lizards can run only on their hind legs with their tail and front legs in the air. Their preferred habitat is trees where they can prey on insects and other small mammals.

Let’s have a look at some of the interesting Australian frilled neck lizard facts.

Near Trees In Woodlands And Tropical Forests

What type of animal is a frilled lizard?

What class of animal does a frilled lizard belong to?

Frilled lizards belong to the reptiles category. They have scales on their skin and lay eggs. They belong to the family Agamidae.

How many frilled lizards are there in the world?

A proper count of frilled lizards is not found. This is because these species are quick to hide, and they cant be counted accurately.

Where does a frilled lizard live?

The frilled lizards are very specific to their habitat and need proper conditions to survive. They can only survive in tropical and warm temperate forests.

What is a frilled lizard's habitat?

Who do frilled lizards live with?

The frilled lizards are known to stay alone and are more solitary animals. They don’t stay in groups. Straight after birth, the baby frilled lizards have no requirement of their parent’s care. They stay with their siblings for only about 10 days after which they leave and lead their independent life.

How long does a frilled lizard live?

The breeding season of the frilled lizards is in September or October, or the wet season. During the wet season, the males try to impress the females by showing off their beck frills. They try to woo the female frilled lizard. After the breeding season is over, the females give birth to about one or two clutches of eggs per season. The baby lizards don’t need the assistance of their parents while growing up. They, however, do stay with their siblings for about 10 days, after which they leave on their paths.

With a stable population of the frilled lizard available, the conservation status of the Frilled lizard, Chlamydosaurus kingii, is that of least concern.

A frilled-neck lizard is a large reptile that has a pink or yellow frill around its neck.  Its body is supported with a long tail, and it also has claws on its limbs that help the lizard hold onto various barks and other such things. These claws also help the frilled lizards to climb easily. The Australian frilled lizard also has brown-gray scales on its body. These scales help the lizards to camouflage in their surroundings and not be easily identifiable by the predators.

With the frill on the top of their head, the frilled lizards can look more intimidating than they look cute. Their appearances can resemble a dragon. This is why many people also think that they are dangerous when they don’t even have venom.

How big is a frilled lizard?

A frilled lizard can grow up to 3 ft. They are about 1.15 times larger than the Komodo dragon.

How fast can a frilled lizard move?

Frilled lizards can be very fast. They can run in small bursts of fast speed. The fastest recorded speed of the frilled lizards accounts to be about 30 mph.

How much does a frilled lizard weigh?

What would you call a baby frilled lizard?

Frilled lizards are omnivorous. However, they largely feed on insects, small mammals, and even smaller insects. These include the likes of mice, crickets, bugs, moths, butterflies, beetles, rats, termites, and small creatures like ants. They are also known to be eaten by dingoes, snakes, hawks, and eagles.

Unlike the common notion, the frilled lizards are not venomous at all. They don’t spit venom and are completely venom-free. Therefore, these lizards also make good pets and are domesticated widely.

The frilled lizard would make an excellent pet. This is because they are very easy to maintain as compared to other lizards and reptiles. Also, they require you to provide them with the provide diet and atmosphere, and they wouldn’t bother you anymore. If you can do this, it can prove as one of the best pets for you.

One of the most amazing Australian frilled lizard facts for kids is that they can stand up and even run on their hind legs. Sometimes the way that the frilled neck lizards move during running appears like the lizard is cycling which is why it is also known as the bicycling lizard.

Misconceptions about the frilled lizard

Many people think that the frilled lizard is venomous and spits out the venom. At large, this idea comes from the related-looking dinosaur in the movie 'Jurassic Park' known as the dilophosaurus. The dilophosaurus used to extend his neck and then spit venom on any suspected predators. However, this is not the case with frilled lizards since they don’t spit venom and are not venomous at all.

Yes, people do keep frilled lizards as pets. This is because these lizards are very easy to maintain and don’t require a lot. They are also very silent pets in general which is why are the preferred lizards to keep as pets. You can buy frilled lizards from any local pet shop that might keep lizard pets as well. They are generally low maintenance as opposed to other lizards, which makes them a desirable pet. You can also find them at most reptile farms.

Here at Kidadl, we have carefully created lots of interesting family-friendly animal facts for everyone to discover! Learn more about some other reptiles including kingsnake, or snapping turtle.

You can even occupy yourself at home by drawing one on our frilled lizard coloring pages.