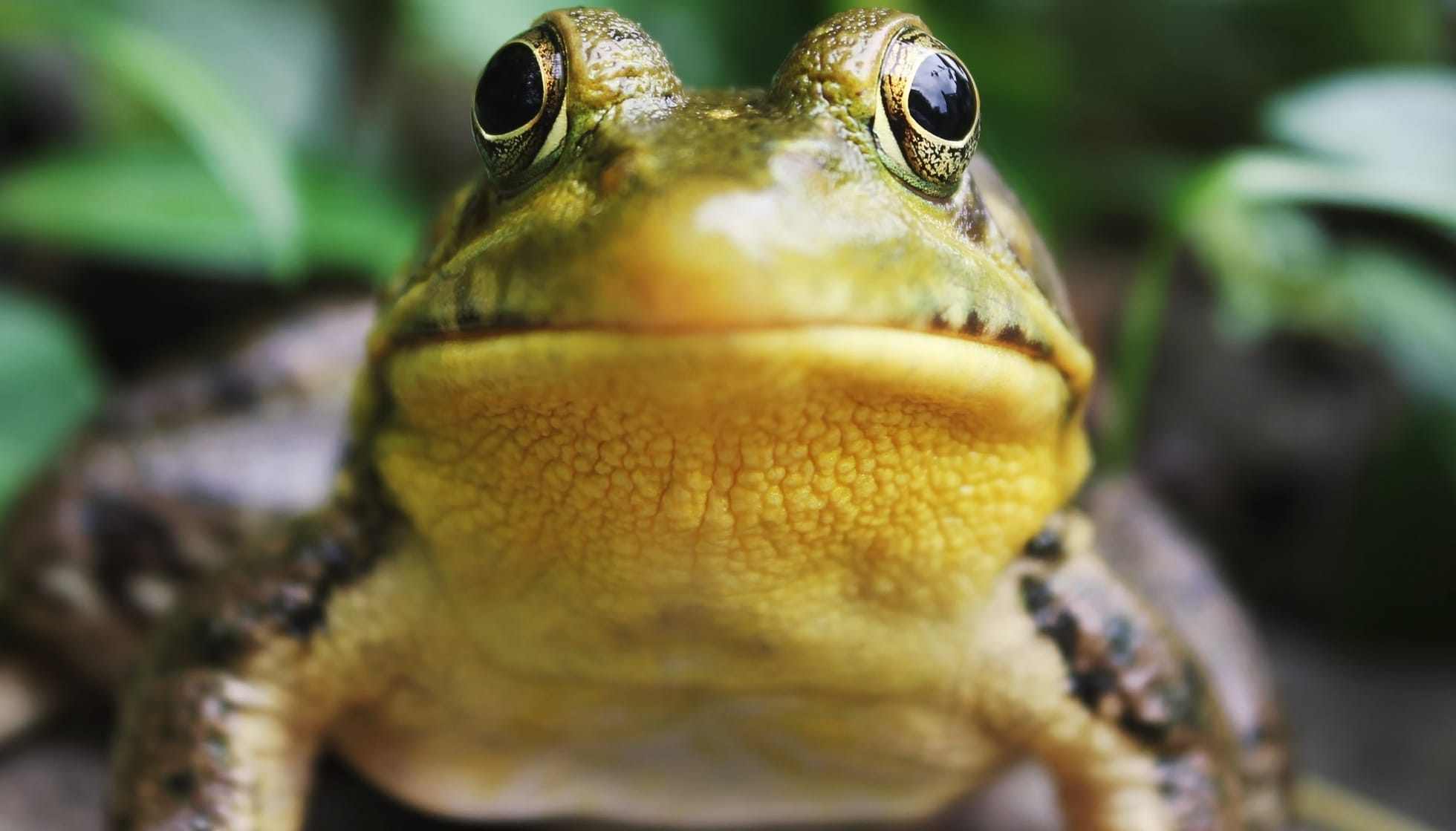 Ever seen a frog darting around in your surrounding? Frogs are cute little amphibians found in various sizes and colors. They are found throughout the world because of their unique adaptability to the environment. From the common frogs and toads like tree frogs and bull frogs to the rarest and endangered ones like Titicaca water frogs, Macaya breast-spot frogs, each one is unique. Soon after it rains or near a pond or a bush, you will find a frog army croaking in unison. The small males attract taller females by singing songs and alluring them. Try touching a frog and its disgusted look and shrieks will scare you. These slithery creatures are great as pets but only for those who dare to pet them. So we as responsible beings should try to conserve these little amphibians. Did you know that there is a frog museum at the American Museum of Natural History, meant for research and conservation of these little ones? Read one to know more fun frog facts.

If you are liking this article and want to know more about frogs, check out common frog and Goliath frog facts.

Herbivore as a tadpole, insectivore, and carnivore as a fully grown frog

What type of animal are frogs?

What class of animal do frogs belong to?

All frogs belong to the amphibian class. They can live both on land and in water. They are ectothermic or cold-blooded animals. Hence, they cannot regulate their body temperature and are suited only to their local marshy surroundings.

How many frogs are there in the world?

Where do frogs live?

Frogs usually prefer living in warm and moist temperatures. Most widely found in the tropical rainforest, wetlands. In the cold American countries, frogs burrow under the ground for winter hibernation. Aquatic frogs and tree frog commonly found in tropical countries.

What is a frog's habitat?

These amphibians require a warm and moist environment to survive. They are ectothermic or cold-blooded animals who live on both lands and in water. The sultry climate helps them to retain the moisture on their skin. A female frog lays eggs in the water. After hatching the tadpole starts its life in the water eventually moving on to the land. A tree frog spends most of its life on a tree while frogs living in temperate American climates hibernate in winters burrowing under moist soil.

Who do frogs live with?

Frogs mostly live on their own, but can be found in packs during the rainy season or near a puddle of water. Frogs leap into people's houses, jump into tanks and adapts living well around people. The male frogs croak and become vocal while looking for a female to mate with. A frog's habitat comprises both its predators and prey.

How long do frogs live?

The lifespan of all the species of frogs ranges between one to eight years.

During the spawning season, shortly after the rainy season, the male frog croaks and signals the female to mate. While mating, a male jumps on the back of a female clinging onto it with its hind legs. This position is scientifically called the amplexus. The fertilization process occurs externally, that is, it is done outside the female body. The fertilization occurs right after the females release their eggs for the males to fertilize. A single male frog gives out multiple mating calls and fertilizes numerous females in a day. It takes three to four days for the frog eggs to develop and within two weeks become tadpoles. One of the interesting facts is a frog's life cycle begins as a vegetarian. Once it becomes a full-grown frog, it turns into a carnivorous species.

There are over 7000 frog species in the world. While most frogs are species of Least Concern, the Titicaca water frog is Critically Endangered as per the IUCN Red List. However, the American Museum of Natural History discovers and conducts modern research on the survival conditions, adaptations, threats, and conservation practices of this amphibian.

A frog's appearance usually has smooth and glossy-looking skin, greenish to dark green in color. Its eyes are big and neon yellow or red in color, protruding out from their chameleon-like small face. They barely have a neck and so cannot turn their heads. It has a wide torso with two front and two hind frogs legs. It has webbed feet, for clinging easily to slippery surfaces and swimming in the water. Its tongue takes up one-third of its body size, helping it to prey on flying insects easily. A toad is also a frog, but it is smaller and bulkier than a frog. The differences between frogs and toads are frogs have glossy skin while toads have a dry skin surface. The hind legs of a toad are smaller as they mostly live on land, unlike frogs which are semi-aquatic. A toad has a warty texture and darker color skin than a frog. The largest frog is the Goliath found in the African rainforests. The poison dart frogs are full of poison and exhibit beautiful colors like blue, red, and copper to ward off their predators.

You can find a frog cute perhaps only because of its small size and for the way it jumps around. Some people find their vocal tune cute when a frog army croaks together. A frog is even kept as a cute pet in many homes. Their smooth and lustrous skin is what makes them look attractive. A frog is a cute little species that often jumps into your home, backyard, and garden right after the rainy season. A tadpole is the cutest little amphibian, followed by the angry and cute-looking toad.

Frogs and toads have a vocal sac and vocal chord which generates sounds for communication. To croak, they breathe in air inflating the vocal sac that vibrates the vocal cords. This vibrating air gives out sounds like whistling, croaking, or singing.

How big are frogs?

Generally, a frog is five times smaller than an eagle and half the size of a duckling. The size of a frog ranges between 2.4-5.1 in (6-13 cm), with Goliath frogs being the largest growing up to 11.8 in (30 cm). Female frogs are taller in height than males.

How fast can frogs swim?

When threatened by a predator or in search of prey, frogs leap into water bodies from the land. A frog can swim at a speed of 50 kmph.

How much do frogs weigh?

The weight of a frog usually depends on the type of its species. Averagely, frogs weigh around 23 g. The Goliath bullfrog weighs around seven lb and weighs the heaviest out of all.

There are no specific names given to male and female frogs.

What would you call a baby frog?

Right after baby frogs hatch out from eggs, they are called polliwogs. Soon after their feet develop and they start to jump, they are known as tadpoles.

Tadpoles are herbivores feeding on algae. Frogs are insectivorous. They prey on flies, mosquitoes, bugs.

Every frog is poisonous to a certain degree. Their sloppy skin is filled with poisonous mucus protecting them from predators. Humans can feel skin irritation or develop an allergy after touching frogs. However, poison dart frogs and golden poison frogs are the most dangerous and poisonous frogs in the world. Just one gram of the poison secreted from their body can kill up to 15-20 people.

A frog can be a great pet for a home as it needs comparatively little care. Also, they are non-toxic to humans. You will always find it jumping all over your home. Pet frogs like tree frogs, dart frogs, and common frogs are great for people who have problems with bugs and insects at home.

An interesting frog fact is that they have teeth in their upper jaws, allowing them to grasp their prey. Frogs shed off their skin and eat it frequently.

The poison dart frogs are called blue-jeans frogs because of their bright blue-colored limbs.

A group of frogs is called a frog army.

Golden poison frogs are so venomous that only a particular snake species can eat them.

A fact of concern is that Goliath frogs and golden dart frogs are becoming endangered species.

Why do frogs scream?

Frogs scream to defend themselves from predators. Frogs scream at night to ward off danger and to feel safe. They start to shriek and scream when touched by humans. It is their way of saying "I'm not liking it so back off". After a rainy spell, we often hear frogs screaming and croaking. It is their search for a mate to unite with. To get rid of frogs and their constant screaming, you can trim your garden bushes and keep your pool clean. Also, spraying bleach and water mixture can effectively shoo away croaking frogs.

How do frogs breathe?

Tadpoles live in water and breathe through their gills. As it metamorphoses into a frog, it develops lungs and a vocal sac on the inner lining of the mouth. It gulps in oxygen which inflates the lungs and accommodates respiration. Since their lungs are not well developed, frogs can even breathe through their skin. The slimy permeable skin allows them to take in oxygen. An interesting fact is frogs can regulate the thickness of their skin underwater. Its skin becomes thinner when oxygen levels are low in the water and vice-versa.

Here at Kidadl, we have carefully created lots of interesting family-friendly animal facts for everyone to discover! Learn more about some other amphibians including African bullfrog, or Panamanian golden frog.

You can even occupy yourself at home by drawing one on our frog coloring pages.