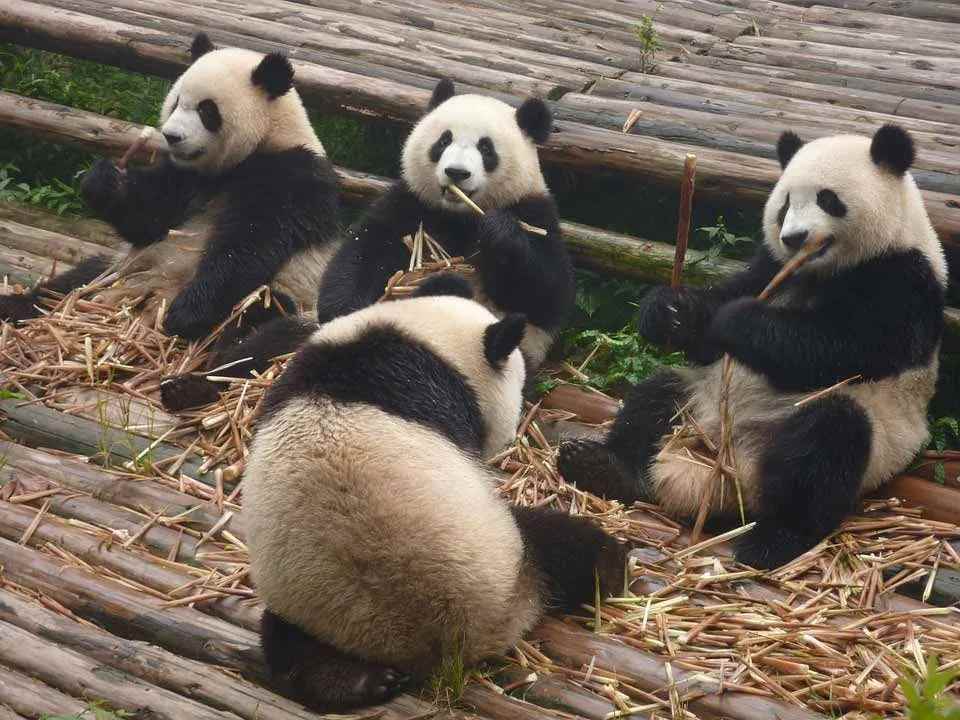 We all are familiar with the giant pandas, one of the cutest species alive on this earth. Giant pandas are large bears with black and white patches on their bodies. Be it a child or an adult. Pandas are admired by everyone. Do you know that pandas usually don’t look after their offspring? Well, get ready to learn some more facts about them. We will discuss the type of habitat that they like to live in and if they are really dangerous or not. The giant panda (Ailuropoda melanoleuca) reside in bamboo forests and spend about 12 hours a day sleeping. Due to their habitat in bamboo forests, they are also known as bamboo pandas. Due to habitat loss and poaching, wild giant panda species has been recognized as being endangered to vulnerable in terms of the conservation status. The Chinese government has launched various initiatives to preserve their populations such as through nature reserve management.

There are various giant panda bear adaptations that allow the giant panda bear to thrive in its habitat, such as thick fur to stay warm, strong jaws and large teeth to crush bamboo, and elongated wrist bones to hold bamboo. So, let’s learn some interesting, fun facts about this adorable species of animals. Giant panda bear tracks have a unique shape which is unlike any other animal. After reading this interesting giant panda bear information, to know more about different animals, you may also want to look at fennec fox facts and Masai giraffe facts.

Large black and white body with a white face and torso and black eye patches, ears, muzzle, legs and shoulders

What type of animal is a giant panda bear?

The giant panda (ailuropoda melanoleuca), also known as 'the panda bear' or panda, is a species of bear found in South Central China. It is well known for its bold black-and-white coat and plump body.

What class of animal does a giant panda bear belong to?

The giant panda belongs to the mammal class of animals.

How many giant panda bears are there in the world?

Where does a giant panda bear live?

What is a giant panda bear's habitat?

Pandas are fond of bamboo, and one will always find them living near bamboo trees. But when it comes to making a home, giant pandas need more than bamboo. Scientists found out that the ideal habitat for giant pandas is in old conifer forests that are rich in water resources and different types of  bamboo. This type of habitat is important for pandas because in such a type of forests it is easy to acquire logs and tree stubs. These log and tree stubs can then be used as a part of their dens.

Who do giant panda bears live with?

Giant pandas live alone. They are solitary creatures, and the majority of the time, giant pandas live in their own territories in southwest China's forests. Female pandas have a gestation period of about 60-200 days long. And after conception, male and female pandas do not live together. The mother raises the baby pandas alone. The pandas leave their mothers after reaching the age of 1-1.5 years.

How long does a giant panda bear live?

The giant panda has an average life span of around 15-20 years in the wild and 35-40 years in captivity.

Giant pandas become sexually mature between the age of four to eight years. Their reproductive abilities remain till the age of 20. Female pandas ovulate in the spring and only once a year. The duration of the ovulation is 2-3 days, and this is the only time a giant panda can conceive a baby. The calls and scents attract male and female pandas towards each other.

The conservation status of giant pandas is endangered and not extinct. Giant panda bear endangered species status is largely due to the loss of habitat and poaching for various body parts of these animals.

The giant panda is a bear with a black-and-white mark on its body. The features of pandas are similar to that of a bear, but these white and black markings distinguish them from the common bear.

Pandas have black fur on their eye patches, ears, legs, muzzles, and shoulders and the remaining body parts are white.  Pandas have a thick, wooly coat that keeps them warm in the chilly forests. The teeth of the giant panda consists of large molars and strong jaws which makes it easy for them to crush bamboos. Pandas are famous for their cuteness. Their unique body color and round body make them appear super cute and adorable.

Pandas are usually silent and solitary animals but in order to communicate, they may use a variety of sounds such as squeaking, growling, barking and huffing.

How big is a giant panda bear?

How fast can a giant panda bear move?

Giant pandas are heavyweight animals, but their weight never stands in the way of running fast. The giant pandas can run at a speed of 20 miles per hour. This speed is pretty impressive as compared to their bodyweight.

How much does a giant panda bear weigh?

The average weight of a giant panda is 200-300 lb. Giant panda's weight depends on the type of diet they are exposed to.

What would you call a baby giant panda bear?

The majority of a giant panda's diet consists of herbivorous diets, such as leaves, stems, and bamboo shoots. Other than eating bamboo, they can eat small animals as well to meet their food requirements. In captivity, the giant pandas eat meat and various other food products as per the preferences of particular animals.

Usually, giant pandas are very cute and adorable, but yes, they can be a bit dangerous too. The pandas can bite pretty hard, and their bite can cause a shooting pain. Apart from this, no other dangerous behavior is observed in them.

Giant pandas can't make good pet. The first reason is that giant pandas are an endangered species, and it is not possible to keep them as pets. And somehow if you manage to have one as a pet, then the second problem you will face is that you will need to have a huge field of bamboo as pandas love to eat bamboos and their appetite is also very large so, you will need to provide them with at least 23 kg of bamboo per day.

It will be a very rare situation when a giant panda attacks a human. Usually, they are calm and solitary, but yes, if you invade their space and threaten them, then yes, they might showcase some sort of dangerous behavior. Every wild animal possesses some kind of danger to humans, and so does a giant panda, but their dangerous behavior is not very fatal.

How are giant panda bears adapted to their environment?

The giant pandas have a distinct black and white mark on their bodies that serve two functions, one is camouflage and the second is communication.  The majority of the panda population have their face, neck, stomach, and buttocks colored white. The white color of these body parts help them to hide well in the habitats covered with snow. The forelimbs and legs are usually entirely black and allow them to hide well in the shades.

How long do giant panda bear cubs stay with their mothers?

The responsibility of raising the baby panda is on the mother. The mother raises the baby pandas alone. The baby giant pandas leave their mother after reaching the age of 1.5-2 years.

Here at Kidadl, we have carefully created lots of interesting family-friendly animal facts for everyone to discover! Learn more about some other mammals including plains zebra, or Asiatic black bear.

You can even occupy yourself at home by drawing one on our Giant Panda Bear coloring pages.