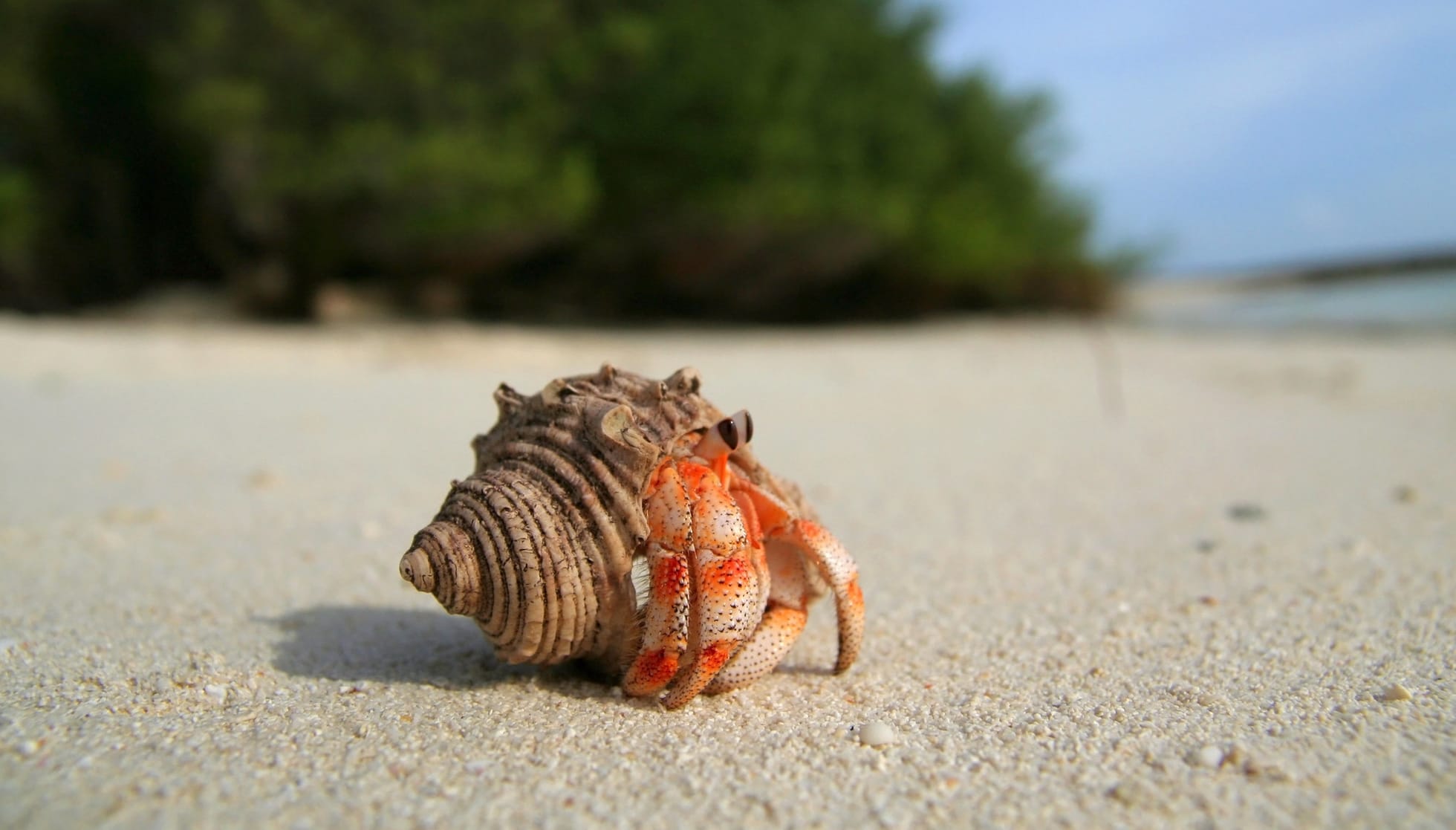 Hermit crabs are a superfamily of crustaceans that includes about seven families, numerous genera, and 800 species. The most special and unusual part of the hermit crabs is usually their shell. Hermit crabs can seem pretty beautiful because of these shells. Other than these shells on their back, they have a hard exoskeleton on the front part of their body and they also have two pairs of antennae that help them understand their surroundings.

These crabs are widely popular as pets. This is mainly the case with the ones that live on land but people don't really understand the facts to take proper care of them, which results in their untimely death when the hermit crabs can actually live as long as 30 or more years. In captivity, they sometimes live only about a few months to a year or so. Read on to know about and understand the beautiful crusty crabs and if you like this article, then check out Sally Lightfoot crab and slipper lobster fun facts too.

Not Listed (Most) Coconut Crab - Endangered

Tropical Or Subtropical And Temperate Areas In The Northern Hemisphere

What type of animal is a Hermit Crab?

Hermit crab is a superfamily of crabs that are a type of crustaceans. Seven families, many numbers of genera, and 800 species are a part of this type of crabs. This superfamily is named Paguroidea.

What class of animal does a Hermit Crab belong to?

The hermit crab belongs to the Malacostraca class of the animal family.

How many Hermit Crabs are there in the world?

The exact number of hermit crab in the wild is unknown. They are somewhat common around the world. However, due to pollution, the number and livelihood of the hermit crabs are in danger. These crabs are mistaking plastic containers as shells, and humans are interfering with their lives and homes, which is posing a threat. Fortunately, they are not yet endangered.

Where does a Hermit Crab live?

Hermit crabs can be found all over the world but they mainly live in the tropical or subtropical areas and in the temperate areas of the northern hemisphere. Some land hermit crabs can be seen in the Bahamas, Venezuela, Australia, Ecuador, Chile, and many more places. Some of the aquatic ones can be found in the depths of the Indian Ocean, European waters, North American waters, as the hermit crab habitat is in almost all marine environments over the world. As pets, these crabs are famous all around the world for their beautiful shell.

What is a Hermit Crab's habitat?

These crabs live both in water and on land. In water, they mainly live in muddy and sandy-bottomed marine water and on land, they even live in holes in trees or under rock ledges. Some can be found in salt marshes or coastal areas as they look for food in those places. In households, the hermit crabs are kept as pets and they are kept in aquariums. Some hermit crabs who can live both on land and water live inside plant stems, bamboos, or in coconut shells. Some aquatic ones, the ones who live in water, can be found living inside coral, hollow wood, or sponges.

Who do Hermit Crabs live with?

Hermit crabs like living in large colonies. They thrive in the environment. They search for food in teams. They not only live well with the fellows of their species, but they also live well with others too. Sea anemones live on their shell, which is beneficial for the crabs too as they can scare off predators away. They even form bryoliths with Bryozoans. They also live as pets with humans but humans are pretty harmful to them.

How long does a Hermit Crab live?

The average lifespan of hermit crabs is about 10 years. They live much less in captivity as a pet. Hermit crab care is usually unknown to many people like their food, living habits. These are things like poisoning from the colored shells, not getting a proper environment because of tap water, or not having the required humidity they need to survive in the surrounding climate. These all can shorten the lifespan of hermit crabs in captivity from a few months to only a year or so. When in fact, in the wild some species can live up to 30 years. One particular species, the Coenobita brevimanus have the ability to live about 70 years long.

The hermit crab has 800 different species under its name and the mating habits and rituals vary a lot in the species. Such as, for the common hermit crabs, if the female of the species is ready, they send a chemical or tactile signal so the males can understand the meaning. In the case of the Caribbean hermit crabs, while they live on land, they can be seen heading to the seashore in large numbers at the time of breeding.

In all the cases of the hermit crabs, the males and females of the species come out of the shell a little. The female then carries the eggs and later goes into the seawater when the eggs burst and all the larvae go into the sea.

As the name suggests, one can assume that these species must have an exoskeleton and grow shell on their body but that's not the entire case. Hermit crabs have a hard exoskeleton on the front part of their body and two pairs of antennae on the front. Hermit crab without shell have soft colled bodies with no protection on the outside and they get these shells from other animals when they leave an empty shell around, like the shells of sea snails. They usually have curled tails with hooks. These tails make it easier for them to fit into the shell. They mainly get their names for their crab-like behavior.

The hermit crabs can seem pretty cute with their snail-like shells and the hermit crab's crab-like movement. These crabs are also very popular among humans. They are widely kept as a pet.

At the time of breeding, the hermit crabs have many rituals where they use the means of communication with their mating partner and these rituals vary according to the many species of the superfamily. Some of them use chemical and tactical signals. Hermit crabs also make sounds like, croaking which may sound like crickets.

How big is a Hermit Crab?

How fast can Hermit Crabs move?

Hermit crabs are named as such because of their crab-like movement. They move pretty well considering the big shell they carry around with them. The fastest hermit crab can move about four inches per second.

How much does a Hermit Crab weigh?

What would you call a baby Hermit Crab?

When the hermit crabs are in their larvae form, they are called zoea.

Hermit crabs are omnivorous in nature. Hermit crab's food habit usually consists of macroalgae, microscopic clams and mussels, and bits of dead animals. They also prey on small animals and fishes as food.

They are not at all harmful. They can be quite friendly if you don't become a cause of threat to them in any way. They don't harm anyone. On the contrary, humans keep them as pets which harms them.

These are very peaceful crustaceans and are not aggressive at all. They don't carry any human diseases and are hypoallergenic, which is beneficial for people who have allergies, they don't bite although this has not been scientifically proven but is said by some owners. You might feel a pinch if a hermit crab holds onto you when you hold them. However, keeping them as pets is not recommended. It's not only harmful to the ones that you keep as pets, but it's also harmful to the wild ones staying in their natural habitat because when people bring home colorful shells home, it doesn't just harm your pet because of the poisoning from the chemicals of the colored shell, they're also taking away potential homes, the shell for the wild ones.

All the hermit crabs being sold at shops are taken away from their homes in the wild because these crabs don't breed in captivity.

Competition and fights for shells can get ugly between crabs.

There are not many freshwater crabs among this superfamily. The only freshwater hermit crab is Clibanarius fonticola.

They are edible in the sense that they don't possess venoms. So, if cooked properly, they can be eaten. However, we highly recommend that you don't try to do that.

Why are they called Hermit Crabs?

When a shell appears somewhere, the hermit crabs make a line standing according to size to try the new shell to see who can fit into it. When hermit crabs die, they also release a kind of pheromone which alerts the other crabs that new hermit crab shells are available nearby.

Here at Kidadl, we have carefully created lots of interesting family-friendly animal facts for everyone to discover! Learn more about some other arthropods including mimic octopus, or house centipede.

You can even occupy yourself at home by drawing one on our hermit crab coloring pages.