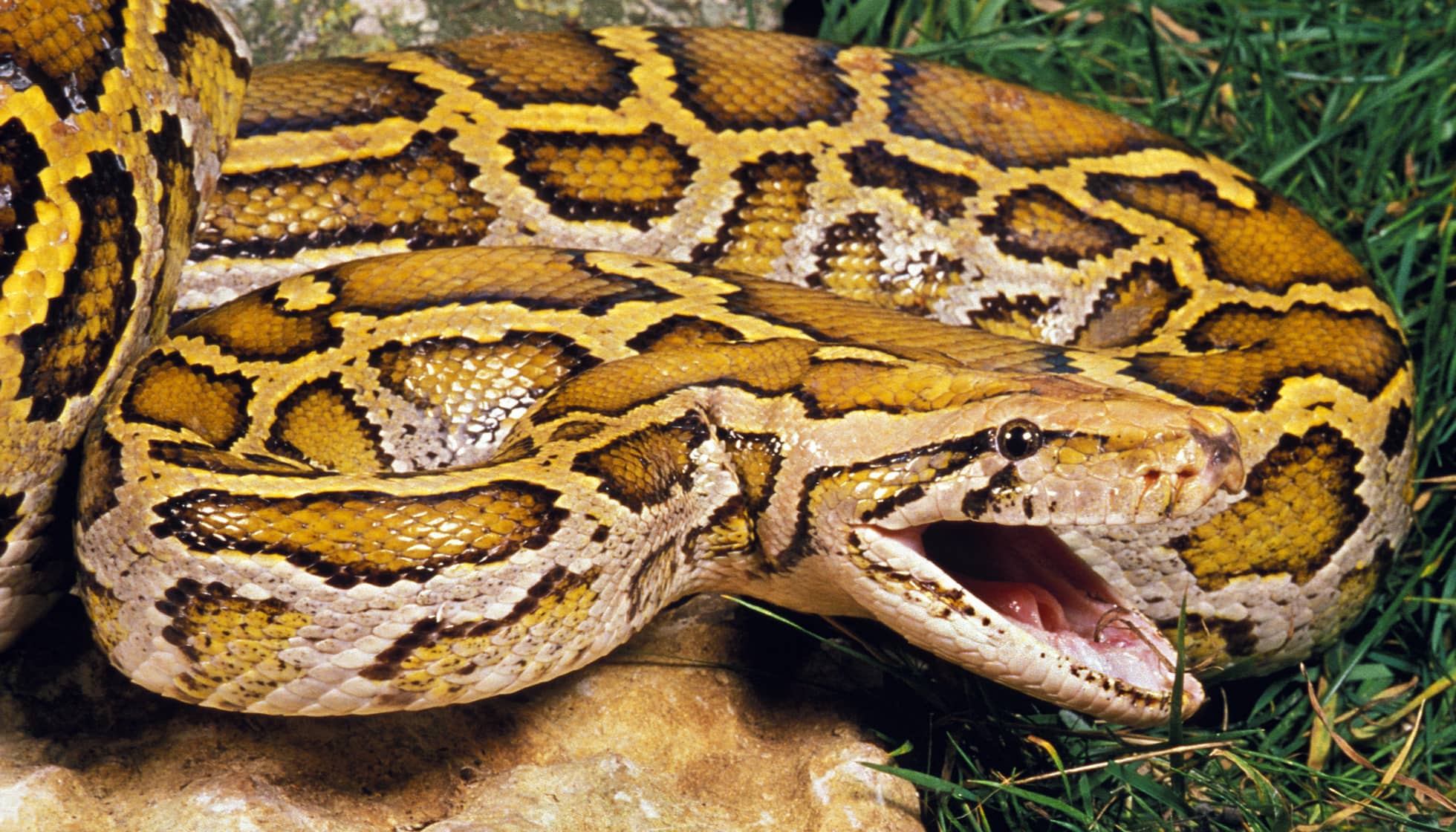 The python is one of the biggest species of snake on Earth and has a wide distribution range in various countries, including Southeast Asia, the Indian subcontinent, sub-Saharan Africa. The python or Pythonidae is the family of non-poisonous snakes which has 10 genera and 42 species. The Indian python is an extensive python species which is also known as Indian rock python, Black-tailed python, Asian rock python. The species of Indian python or Python molurus had two subspecies, Python molurus pimbura which is discovered in Sri Lanka, and the Python molurus bivitatus that was treated as its subspecies till 2009, now it is recognized as an individual species of genus Python. Indian pythons are massive snakes identified for the unique pattern of varying colors which enables them to camouflage with ease. These lethargic snakes inhabit open woodlands, grasslands, marshes, particularly near water bodies. These snakes can also be found in the zoo where they are displayed for the public to see.

What type of animal is an Indian python?

The Indian python, scientific name Python molurus, is a species of python snake which is also known as the rock python. These snakes have a huge distribution of habitats. They have a timid and lethargic temperament.

What class of animal does an Indian python belong to?

The Python molurus belongs to the class Reptilia, genus Python, this species of snake is further classified into one subspecies Python molurus pimbura, previously the Burmese python was recognized as one of its subspecies.

How many Indian pythons are there in the world?

The Indian python population is gradually decreasing because of various factors, however, the exact number of pythons has not been listed.

Where does an Indian python live?

The python genus species P. Molurus, is an exotic breed of snake which largely inhabits Asian regions, particularly in India, Nepal, Pakistan, Bangladesh, Sri Lanka, southeast Asian countries. Their range may be extended as far as Quingchuan County in China in the North and Borneo island in the south, However, this snake is absent in the Malayan Peninsula. In India, it is particularly found in hill forests of Western Ghats, Eastern Ghats, Deccan plateau, and Assam. The pattern on the body of these snakes depends on the landscape and habitat in which they are discovered. The Python molurus pimbura is found in Sri Lanka.

What is an Indian python's habitat?

The ideal habitat of the P. molurus can be described as a damp landscape not very far away from water. The Indian python habitat has a vast range from grassland, river valleys marshes, swamps to mangrove thickets, foothills, and rainforests. These habitats shelter them with enough birds and other animals to prey on. The Indian pythons are frequently found concealing themselves in mammal burrows, water reeds, tree cavities. They can be also found in the zoo in a manmade habitat.

Who do Indian pythons live with?

P. molurus is a solitary snake, like most snakes, it is only during the breeding season when they seek a partner.

How long does an Indian python live?

Indian python lifespan is over 20 years, however, the lifespan of snakes in open habitat may differ from snakes kept in a manmade habitat like a zoo.

The Indian python snake acquire their sexual maturity when it becomes 2-3 years old, also their sexual maturity depends on its body weight, the standard weight of an adult python is 200.6 lb (91 kg). Indian pythons spend most of their life secluded but it is only during the mating season they search for a companion. The process of reproduction is copulation and the method is long, the male endeavor to persuade the female by wrapping itself around the body of the female. Once the male and female are aligned and stimulated, the male initiates the process by inserting its hemipenis into the cloaca of the female for approximately 5-30 minutes. After mating successfully, the female lay almost one hundred eggs after three to four months as pythons are oviparous, and the female curls itself around their eggs. The duration of incubation is around two to three months and once the eggs are hatched the young Indian pythons become independent very rapidly as they are precocial.

Captive breeding is one such practice that enables the supply of snakes for displaying it in a zoo or keeping it as a pet.

Indian pythons once had a large range of distribution and population, gradually with every passing day the population of this exotic snake is decreasing in India as well as in other countries and for the declination of its population, humans are largely responsible. Habitat loss is a primary explanation for the Indian python's endangered situation, humans are burning down forests and killing these snakes out of fear. The skin of this snake is considered as a luxury hence they are killed to make various accessories for fashion, they are being captivated and kept as a pet in many homes and every zoo. This endangered species and its subspecies Python molurus pimbura are both protected under the Indian Wildlife Protection Act of 1972. Even after all the precautions and attempts to save this snake from poachers the Indian python is a Near Threatened species as per IUCN.

Indian pythons are acknowledged for their length and unique patterns of various colors on their body. The species had two subspecies but today one of its subspecies, the Burmese python, is treated as an independent species which is bigger than the Indian pythons. The Indian python size depends on their sex, as they illustrate sexual dimorphism. However, their average size is around 252 in (640 cm) and weigh approximately 200.6 lb (91 kg). Indian pythons also have a distinctive arrow-shaped symbol on their head. The entire body of these snakes is covered with assorted shades of brown and tan color in various patterns, however, the pythons from the regions of Assam and Western Ghats have darker shades than the pythons from the Eastern Ghats and Deccan plateau.

This endangered species of snake can be intimidating because of its body length and appearance.

Indian pythons are solitary. During mating season they may communicate with their partner, which involves a distinct set of physical gestures. Pythons use chemoreception, which is the phenomenon of transmitting chemical messages, which help them to trace and hunt their prey.

How big is an Indian python?

How fast can an Indian python move?

Indian pythons are primarily lethargic and have an unusual way of chasing and hunting their prey, but the exact speed is not listed.

How much does an Indian python weigh?

Males and females are not assigned separate names.

What would you call a baby Indian python?

Female lays almost 100 eggs, and it takes around two to three months for the eggs to hatch. Baby pythons, when born, are called hatchlings. The female python coils itself around the eggs before the incubation stage.

Indian pythons are carnivores, their diet can range from small birds, mammals, rodents to other reptiles. Pythons are constrictors, hence they coil around their prey to suffocate them and then devour them, but it cannot eat anything bigger than its head.

No, Indian pythons are non-venomous.

Indian pythons are protected but it is now kept as a pet apart from keeping them in the zoo. Although it is not advised to keep wild pythons as a pet yet methods like captive breeding are used.

Indian pythons have poor vision and heat-sensing pits which enables them to perceive the body heat of the other animal.

The hatchling has egg tooth, to get them out of the eggs.

Indian pythons prey on various mammals, they may attack and act aggressively once threatened but there is no such record of them devouring human beings.

The Indian python in popular culture

Snakes have been used numerous times in popular culture be it Harry Potter, Rikki Tikki Tavi, or The Jungle Book. Rudyard Kipling in his The Jungle book has the character Kaa, which is an Indian python.

Here at Kidadl, we have carefully created lots of interesting family-friendly animal facts for everyone to discover! For more relatable content, check out these black racer snake facts and reticulated python facts pages.

You can even occupy yourself at home by coloring in one of our free printable Indian python coloring pages.