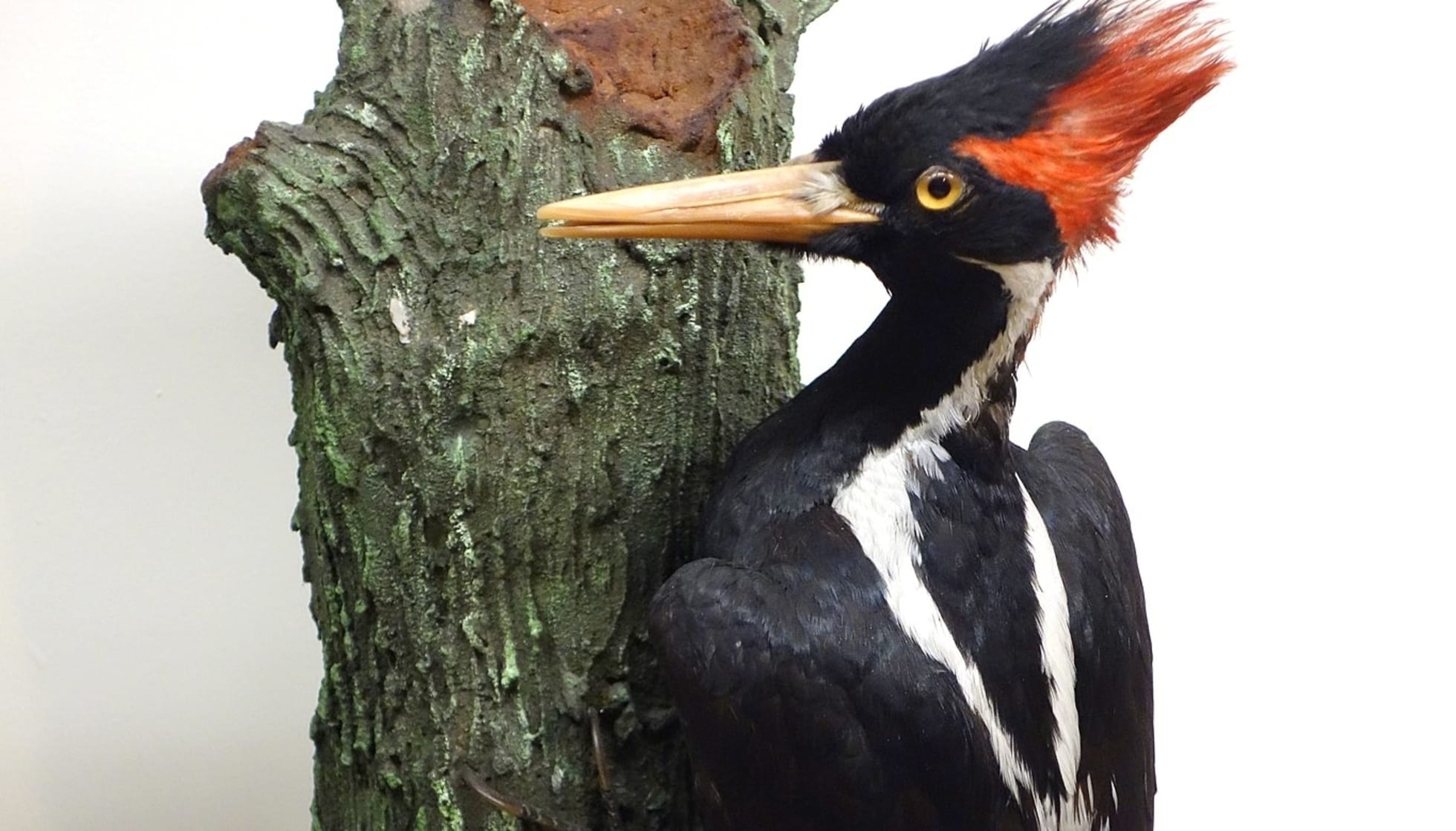 Ivory-billed woodpeckers were one of the largest woodpeckers in the world. Their story of presumed extinction is a poignant example of the effects our anthropocentric attitude has on the environment. Ivory-billed woodpeckers, colloquially referred to as the 'Lord God Bird' is a long, 20 in (1.7 ft) bird, with a remarkable 30 in (2.5 ft) wingspan. They have been classified into two main groups, one found in North America and one in Cuba, with slight differences.

Their habitat mostly consisted of old-growth forests, where the cavity of the dead trees provided space for their nests. Unfortunately, due to human interference with their natural habitat, in the 1800s and early 1900s, their population declined. Now their status is Critically Endangered on the International Union for Conservation of Nature or the IUCN Red List and is perhaps extinct.

If you found this article interesting, we recommend reading about the pileated woodpecker and cuckoo.

What type of animal is an ivory-billed woodpecker?

Ivory-billed woodpecker (Campephilus principalis), the third-largest woodpecker in the world, is a beautiful species of bird, belonging to the genus Campephilus, with 11 other species.

What class of animal does an ivory-billed woodpecker belong to?

How many ivory-billed woodpeckers are there in the world?

Ivory-billed woodpecker sightings are extremely rare. They were last seen in the year 2005 when they were thought to have been extinct for a long time. However, this was a controversial finding and many ornithologists have since questioned this claim. Therefore, a present estimate of the living population of this species is not available.

Where does an ivory-billed woodpecker live?

Ivory-billed woodpecker (Campephilus principalis) species were also found in Cuba, with only slight differences. Here too, they dwelled in pine and hardwood forests. With time, they were confined to a few areas marked with logged pine trees, as wood was now extracted at an increasing rate.

Ivory-billed woodpeckers (Campephilus principalis) were known to live in contiguous forest areas with a large number of dead or decaying trees providing cavities (used as a nest) for them to inhabit. They could also be found in wetland swamps as the woody vegetation is used in place of trees.

What is an ivory-billed woodpecker's habitat?

Their staple diet was insects: beetle larvae, in particular. This specific requirement is fulfilled by areas with a large number of dead trees, which can be peeled and morphed into cavities. Earlier studies show that these birds inhabited North American upland pine forests and lowland forests. With increasing human interference and deforestation, these forests were logged in the early nineteenth century. This drastically reduced the area for the birds to inhabit. In search of an alternate habitat, these birds flocked to places like bald cypress swamps, forests of sweetgum, and willow oak to name a few. Forest areas in Arkansas forming one such bottomland are therefore included in this list.

Who do ivory-billed woodpeckers live with?

Ivory-Billed are known to be monogamous, i.e a couple typically stays together for their lifespan. Though each bird has its own roosting tree. They tend to live in small groups, but groups of 11 birds have also been sighted. The young accompany their parents (usually the male, for roosting) for about a year, even though they are capable of living independently after three months.

How long does an ivory-billed woodpecker live?

While it is difficult to make a scientific claim about their longevity, given that they are probably extinct, earlier reports on the bird suggest that their lifespan is approximately 15 years.

Studies on the bird suggest that they lay eggs in a clutch of 1-6 eggs. Ivory-billed woodpeckers have a seasonal reproductive pattern, i.e. they lay their eggs during a particular season, which is claimed to be in the months of January-April. Therefore, they only reproduce yearly.

Once the nest is built, which takes about two weeks, the female lays the egg and the male cohabits with the eggs and later, with the young. The average time for the eggs to mature is also around two weeks, after which the parents take care of them for a year before they are entirely independent.

The International Union for Conservation of Nature Red List classifies Ivory-Billed Woodpecker as Critically Endangered. The last sighting was in 1987. Since then some controversial claims have been made about their existence. Many experts presume them to be Extinct.

An average ivory-billed woodpecker is 18-20 in long (48-53 cm) and has a wingspan of 30 in (2.5 ft). The distinguishing feature was the dense black or purple-hued plumage, with white stripes extending from their necks to their upper wings. They are named after their pale bills, which resembled the ivory color. While the males have a distinct red crest, females have a black crest.

Birds found in the Cuban region were slightly different in appearance with smaller bills and longer stripes that reached its bills.

These North American birds were magnificent to look at, with their heavy pale bills and large wingspan. They evoke respect and reverence but it might be hard to classify them as cute.

These birds use both visual and auditory channels to communicate. The ivory-billed woodpecker call, known as 'kent', is often compared to the sound produced by a trumpet or clarinet. Another sound specific to this bird is its quick double-tap on the barks with its bill, the second tap being usually softer than the first.

How big is an ivory-billed woodpecker?

The ivory-billed woodpecker is on average 20 in (1.7 m) long and has a wingspan of approximately 30 in (2.5 ft). To understand its relative size, one may say that it is smaller than a hawk but larger than a crow.

How fast can an ivory-billed woodpecker fly?

No data has been found about the speed of these birds, however, it is estimated that the ivory-billed woodpecker was a fast flyer.

How much does an ivory-billed woodpecker weigh?

What would you call a baby ivory-billed woodpecker?

Ivory bills mainly ate insects, such as beetle larvae, by peeling away the barks of the dead trees with their bill, forming the site for their nest. Their diet also consisted of nuts, grains, fruits, etc.

No, they cannot be deemed dangerous. In fact, they played an important role in maintaining the balance of the forest ecosystem.

No, even if they were abundantly available, these birds require a specific habitat to survive and thrive.

Because of their beautiful bills, Native Americans used them for decorations. Some archaeologists also claim that trade in the ivory bills must have been prominent. This assertion is backed by the findings of skulls outside the possible home range of an ivory bill.

A song by the famous musician Sufjan Stevens was inspired by the bird, titled 'The Lord God Bird'.

This North American bird is in fact, the inspiration for Disney's Woody Woodpecker.

The ivory-billed woodpeckers extinction and rediscovery

Unfortunately, it is the disappearance of these North American birds that made them famous. Their habitat was the old-growth forests. However, the destruction of these forests led to a decrease in the population of this species. By the late nineteenth century, sightings were considered rare. The industrial load due to the World War I and II increased this exploitation. This led the ivory-billed woodpecker to be classified as Critically Endangered on the IUCN Red List, and Federally Endangered by the U.S. Fish and Wildlife Service.

Several sightings had been reported across Texas. However, on closer inspection, most of them were misidentified. In 2004, when sightings were reported, an ornithologist from Cornell Laboratory led an expedition to confirm them. This led to an extensive endeavor by the Cornell University and others to relocate these birds, searching areas of southeastern United States across eight states. However, no convincing evidence could be found.

Ivory-billed woodpeckers are closely related to the pileated woodpecker. This striking similarity is at the heart of the controversial sightings in the early 2000s. The primary distinctions are in their physical appearances. The placement of white strips is slightly different from the ivory bill, in that, it is not visible on the wings and is rather on the sides of their body. All pileated woodpeckers have a red crest and a white chin. Pileated woodpeckers are relatively smaller and have a salty, darker plumage.

It is also speculated that due to the adaptive advantage of pileated woodpeckers, they outlived ivory-billed woodpeckers.

Here at Kidadl, we have carefully created lots of interesting family-friendly animal facts for everyone to discover! Learn more about some other birds including the kingfisher and the great green macaw.

You can even occupy yourself at home by drawing one of our ivory-billed woodpecker coloring pages.