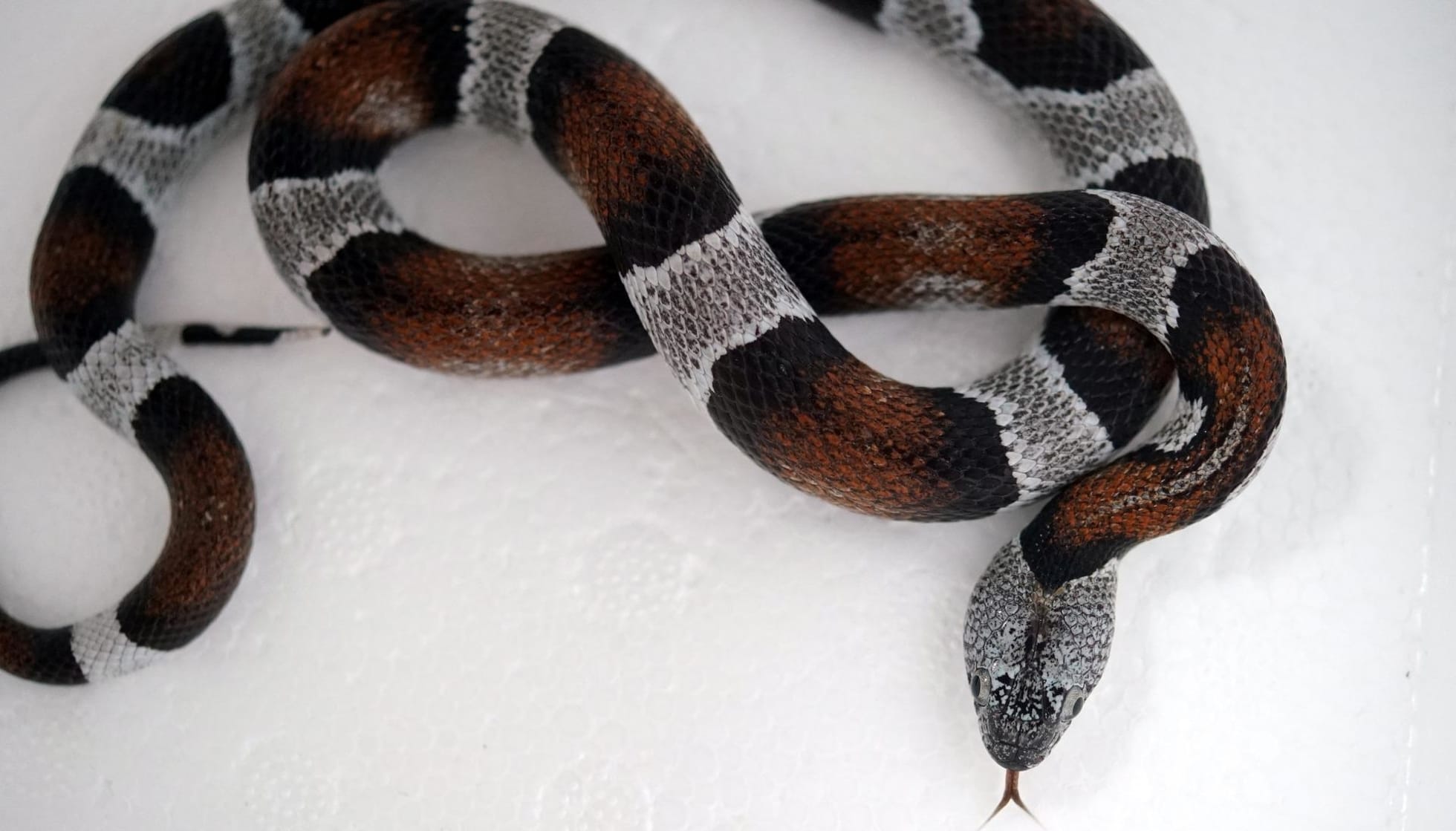 People have been fascinated by snakes as an animal since ancient times. Nowadays some of the relatively docile species have even become popular pets for their behaviour and maturity. Such a species is the king snake. The king snake is typically known for their docile behavior around humans once tamed, although predators, they are really good to have around even for beginner snake owners. If agitated they might sometimes bite you with their teeth, but it is completely harmless as they have no venom at all. They typically have vivid patterns on their scales like speckles or chain-like bands that make them look beautiful, with white shades and colors. Another perk of having kingsnakes live nearby human-inhabited areas is that they eat other venomous snakes as prey, such as rattlesnakes and pit vipers, whose venom they are immune to. This is why they reign as king in southern states. King snakes are sometimes mistaken for the venomous coral snakes who are also known to eat other snakes and small mammals. Do read on to learn more fun facts about kingsnakes found throughout the United States.

What type of animal is a kingsnake?

As evident by their name, the king snake is a type of docile and non-venomous snake, who kill their prey by constriction. They gain their name as kings for their habit of eating other snakes as their prey, including their own species.

What class of animal does a kingsnake belong to?

Kingsnakes belong to the class of reptilia and the family Colubridae. The scientific name of common kingsnakes, also known as eastern kingsnakes is Lampropeltis getula and it includes the Greek words 'shiny shields'.

How many kingsnakes are there in the world?

It is hard to tell how many kingsnakes there are in the world as some of the species such as the common kingsnake and the Florida kingsnake are decreasing in numbers, while others are thriving in their natural habitats.

Where does a kingsnake live?

Their habitats vary highly with each subspecies. Some are prone to live in forests, deserts, grasslands, or urban surroundings while others tend to live around swamps, marshes, or arid areas.

What is a kingsnake's habitat?

Common kingsnakes are diurnal and they tend to spend a major portion of their day below leaves and other kinds of debris. They can also be found in trash piles or basking in sunny clearings, or even along stone walls in urban areas.

Who do kingsnakes live with?

Due to their habit of eating other snakes, including their own species, they tend to live alone. After laying eggs, a female kingsnake leaves the eggs on their own, so when they hatch two to three months later, the hatchlings are left to fend for themselves from the very beginning.

How long does a kingsnake live?

Although we are left to guess their lifespan in the wild, in captivity they are known to live up to 20-30 years.

Male kingsnakes often battle for the female's attention, the one who loses then coils up and lies down with their head flat on the ground, while the winner then mates with the female. A female kingsnake can lay several clutches of eggs per breeding season, each clutch consisting of 3-24 eggs.

Some of the subspecies like the common kingsnake as well as the Florida kingsnake are declining in numbers and hence are enlisted as a species of concern, while others are thriving.

The appearances of these snakes can range highly within their species. The eastern kingsnake or the common kingsnake appears typically with round pupils, spoon-like head and shiny black scales with pale yellow or white chain-like bands or rings around their body, in speckled members of the family sometimes all of their scales are speckled with yellow or white, and sometimes the speckled pattern would only be visible in vague dots. The scarlet kingsnakes are often mistaken for the poisonous coral snakes with their scarlet scales, with black and pale yellow or white chains or rings banded around them. The one thing they all share is the length of their hatchlings.

They are very cute with their shiny black, brown, and red scales with vivid patterns, speckles, or chain-like bands or rings around them. This pattern varies with each of the subspecies making them look unique and exquisite.

These nonvenomous snakes are known to communicate with their tongue flick, with which they are able to perceive taste and smell, as well as with pheromone-like chemical secretions through which they communicate about danger and even use them as a type of mating call.

How big is a kingsnake?

The adult snakes of this species can grow up to 30-60 in, which works out almost the same height as a Japanese macaque.

How fast can a kingsnake move?

While we are unable to say just how fast this snake can move, they are known to use quick and jerky movements that startle their prey. They are very good at camouflaging which saves them from the eyes of predators.

How much does a kingsnake weigh?

Their average weight is about 3-5 lb, which strangely, is the same as some baby turtles.

There are no distinctions between the names of female and male members of the species. They are merely called male and female kingsnakes.

What would you call a baby kingsnake?

The newly hatched snakes are often called hatchlings, and once a little older they are called snakelets, but there is no species-specific name for kingsnake babies.

The diet of these reptiles mostly consists of small mammals like rodents, lizards, bird eggs, and of course the one they are most famous for, that is other snakes, be they poisonous like rattlesnakes or even their own species.

Kingsnakes are not poisonous at all, they kill their prey by constriction. They are even immune to lots of other snake venoms, which helps them with their diet of poisonous snakes.

Kingsnakes are very docile around humans once tamed, which makes them a very good pet even for people keeping snake pets for the first time. They might bite sometimes if extremely agitated, but as they are non-venomous their bites are not dangerous at all.

As interesting as these smooth-scaled reptiles are, here are a few fun facts to make them even more interesting. Did you know that snakes can sometimes mimic the coloration and scale pattern of endangered species? Well, that is exactly what the scarlet kingsnake has been known to do, as, over a period of time after the venomous coral snake went almost extinct in the North Carolina region, the nonvenomous scarlet kingsnakes evolved to look almost identical to the coral snakes who are famous for their deadly venom.

Did you know that kingsnakes also mimic the coral snakes to fool their predators, like the red tailed hawks, as unlike kingsnakes they are not immune to venomous snakes, and so they try to avoid them.

Did you know that to distinguish between kingsnakes and the coral snakes, people have come up with various rhymes that distinguish the rings around their body throughout the United States.

Did you know that the name milk snakes came from the belief that they drink milk from cows as they were always found hanging around barns, which, coincidentally are full of the rodent population?

Did you a Common kingsnake secretes an unpleasant musk as repellants if captured by a predator. They are also known to rattle their tails mimicking the rattlesnakes, that, ironically, they are known to eat.

Although some species of these reptiles, such as the common kingsnake, are decreasing in numbers in the Florida and Todos Santos region due to pet trade, habitat loss, and fire ants (who are known to swarm and eat the snake's eggs as well as hatchlings). Kingsnakes are not really considered endangered as compared to fellow members of this smooth-scaled species of snake, as they are thriving in their natural habitats.

You can even occupy yourself at home by drawing one on our kingsnake coloring pages.