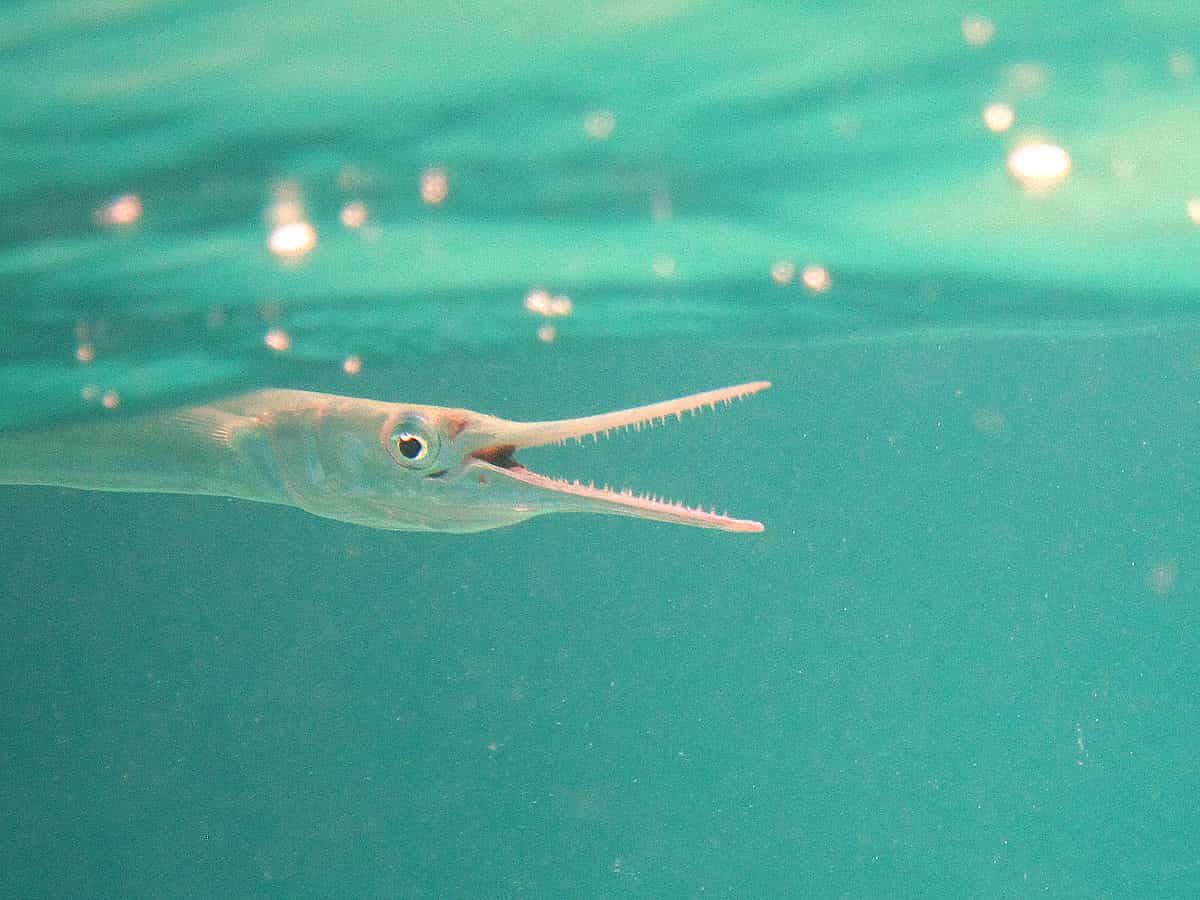 Needlefish belong to the family of Belonidae and consist of up to 35 species of silver needlefish. Some of them are found in freshwater, while the others in brackish or coastal waters. They are classified into ten different genera. Some of the famous species are Garfish, giant needlefish, flat needlefish (Ablennes hians), super strike needlefish, and the Atlantic needlefish (Strongylura marina). Needlefish are widely spread creatures, with several of their species found in the Pacific Ocean, the western Atlantic Ocean, and the Mediterranean Sea. Needlefish usually swim near the surface of the coastal waters. Their slender and streamlined bodies help them swim and move quickly just below the surface. Needlefish catch live food that comes near the surface of the water. Needlefish are caught by fishing and consumed by humans with the help of needlefish lures. Needlefish have elongated and thin bodies.

They have a single vertical fin, and the vertical fin is located at the extreme edge of their back. Needlefish have elongated precise-toothed jaws with sharp teeth. Needlefish are oviparous. Their reproduction occurs during May and June. As the larvae grow, their lower jaws grow longer, but their upper jaw and lower jaw become equal in length as they attain maturity. Needlefish grow up to 37 in (94 cm) long and are identified by their slender, long, sharp teeth.

To know more about these fascinating animals, read on. You can also check out the scorpionfish and the Moray eel.

What type of animal is a Needlefish?

Needlefish, also known as long tom, is a type of fish belonging to the family of Belonidae.

What class of animal does a Needlefish belong to?

Needlefish belong to the class of Actinopterygii.

How many Needlefish are there in the world?

Needlefish are widespread, but their exact number is not known.

Where does a Needlefish live?

They are distributed widely and are primarily found in the Pacific Ocean, the western Atlantic Ocean, and the Mediterranean Sea. Their preferred habitats are the subtropical regions, but some may also be found in temperate waters.

What is a Needlefish's habitat?

Needlefish are widely spread creatures, with several species found as freshwater needlefish and others in shallow waters. Needlefish live in coral reefs, freshwater, open ocean, coastal waters, and shallow seas. They are marine creatures that usually swim near the water's surface to catch live food. Needlefish are mainly found in the waters near estuaries, rivers, and islands. Needlefish move away from the shore and the coast during the colder months and return again in the spring and the summer seasons when the temperature is high or moderate.

Who do Needlefish live with?

Needlefish are a social species, and they live in schools. Needlefish live with other peaceful creatures and other needlefish as well.

How long does a Needlefish live?

Needlefish have a life expectancy of three to four years.

Needlefish are oviparous, which means that they lay their eggs with embryonic development. Their reproduction occurs during May and June; they breed in the coastal waters and release their eggs in the water. They prefer shallow waters to breed and lay their eggs, as there is a large existence of algae and seaweeds, which helps them stick and get entangled in these thread-like structures. As soon as the larvae hatch, it becomes capable and independent of feeding itself. The eggs take 10 to 15 days or around two weeks to hatch. The larvae have short jaws which are of equal length. With maturity, their lower jaws grow longer. Ultimately, their lower jaws grow equal to the length of the upper jaws; thus, both the upper and lower jaws' length becomes equal.

Most of the needlefish species are not extinct or endangered, but there is no information available as a whole for their genus. The garfish, flat needlefish (Ablennes hians), and the Atlantic needlefish (Strongylura marina) are confirmed as of Least Concern by the IUCN, International Union for Conservation Nature.

Needlefish have an elongated and thin body. They are also known as long tom. Their mouth looks similar to a needle. They have their nostrils situated on the inner side of the eyes. The needlefish have small pectoral fins when compared to other fish's anal and dorsal fins. Their dorsal fin is located at the extreme side of their back. They have a single dorsal fin and elongated precise-toothed jaws. Needlefish have a slender body with silver edges and greenish-blue colored backs. Needle fish are usually blue or green, with silvery bellies and their dorsal fin is green colored with the lower part being silvery and golden. Their fin helps them move swiftly. They grow up to 37 inches in length and are identified by their long sharp teeth that are equipped with several needle-like structures called a beak. Their eyesight and the sense of vision help them hunt and catch their prey. Their streamlined, long slender body helps them achieve great velocities while swimming.

Needlefish are kind of cute, but they are not really adorable. They are hunted or caught during fishing only because of their delicacy and taste.

They communicate through tactile and physical channels. For instance, all the male species search for their respective females and compete with each other.

How big is a Needlefish?

Needlefish are long slender species that can grow up to 37 inches long in length. Their length ranges from 1.2-37.4 in (3-95 cm). They are around two times bigger than brown bullhead.

How fast can a Needlefish swim?

How much does a Needlefish weigh?

There are no distinct names for males and females.

What would you call a baby Needlefish?

There are no specific names for baby needlefish, but they are called larvae.

Needlefish consume small fish, planktons, crustaceans, krill, and shrimps. Their diet mainly consists of live food, rather than frozen food. Some freshwater needlefish also eat some small insects, frogs, and tadpoles. The perfect answer to what do needlefish eat would be small fish and crustaceans. They are carnivores, and so they have excellent hunting skills. They are known as a predatory species, and so they catch young anchovies, small fish, and sardines very often.

Yes, they are predatory fishes, and so they are quite aggressive.

Yes, they would make a good pet. They are sometimes kept in aquariums. As they are social creatures, they need to be kept in small schools or with some peaceful creatures that are not aggressive but are docile.

Needlefish do not have a stomach or gut; rather, an enzyme called trypsin is released by their digestive system that further helps in breaking down the food they ingest.

Needlefish have blue or green colored flesh and bones.

No, needlefish are not endangered or threatened.

No, they do not generally attack, but they may be harmful. They have been reported to kill two humans accidentally, but otherwise, they are not harmful to humans. They are dangerous when startled or disturbed.

Here at Kidadl, we have carefully created lots of interesting family-friendly animal facts for everyone to discover! Learn more about some other fish, including lobsters and tetras.

You can even occupy yourself at home by drawing one of our Indonesian needlefish coloring pages.