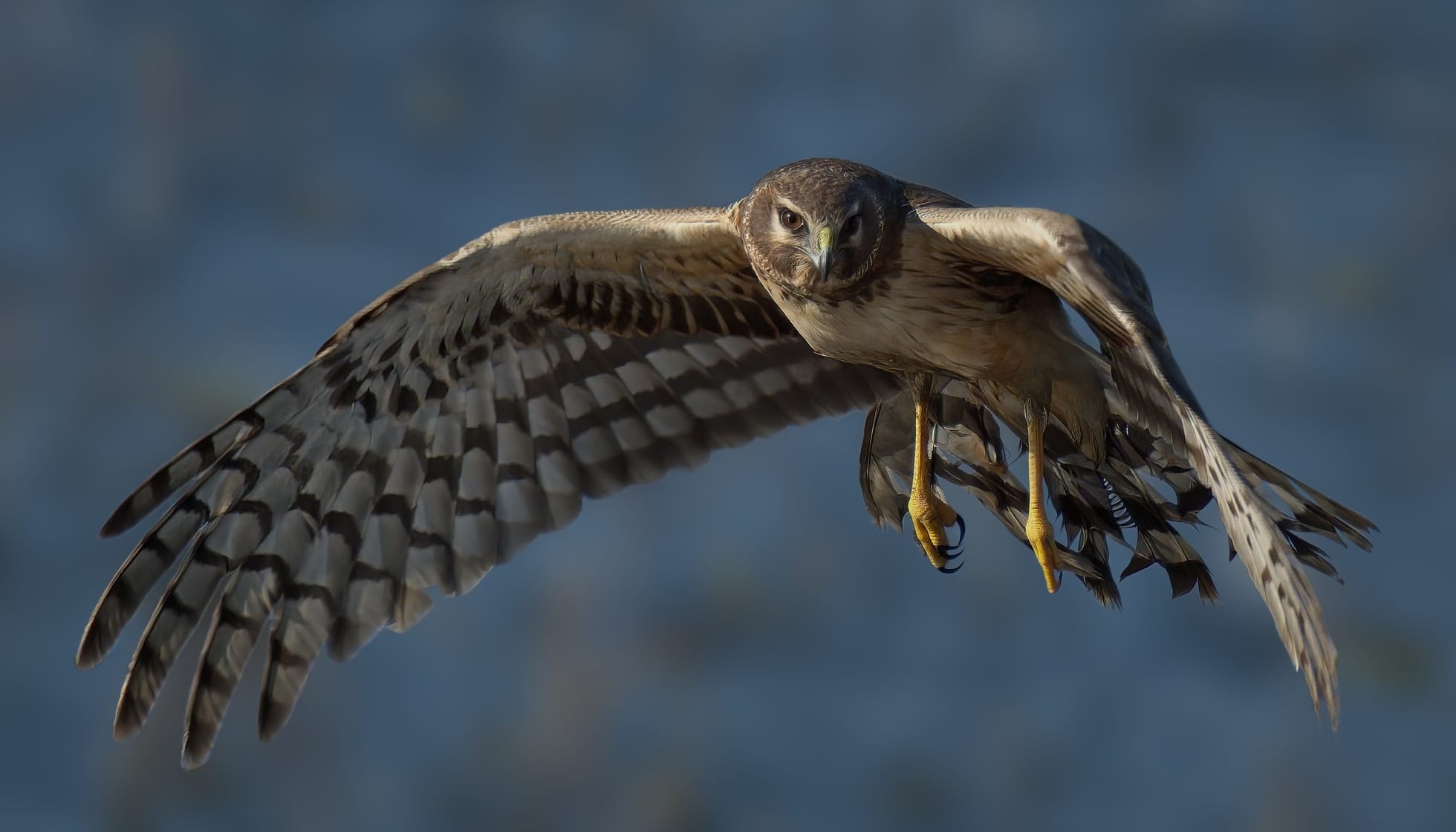 The best way to identify a red tail hawk from a northern harrier is by identifying the distinct color of the tail and the overall color of the bird. The former has a darker shade of brown or grey on its body.

These North American birds, despite being hawks, have a lot of owl-like facial features. Unlike other hawk species, these birds use their hearing in spotting their prey along with their keen eyesight. Their short and circular face can be often confused with that of an owl.  Also, these North American birds live in various habitats that range from marshes to thick forests.

If you find our content interesting then do check out the ivory-billed woodpecker and the wood thrush.

All Over The Northern Hemisphere

What type of animal is a northern harrier?

The northern harrier is a famous bird of prey that belongs to the family of Accipitridae.

What class of animal does a northern harrier belong to?

The northern harrier belongs to the class of Aves of the Animalia kingdom.

How many northern harriers are there in the world?

There is no exact data or statistics that account as to how many northern harriers are present on the planet. However, as this species is listed as of Least Concern by the International Union for Conservation of Nature or the IUCN Red List we can assume that the number is quite substantially high but the destruction of habitat by humans and their numerous activities has led to the population of the northern harriers to be on the decline.

Where does the northern harrier live?

The northern harriers are found on the continent of North America. Major groups of birds are found in northern Alaska along with the coastal areas of Canada. During the season of winter, these birds migrate and can be found in the central states of the USA. The usual location of these birds involves open areas, swamps, grasslands, and plains.

What is a northern harrier's habitat?

The open habitats of the northern harrier are vastly variant. These birds can be found in plains, shrublands, grasslands, forests, open areas. Open areas are a favorite spot for these birds of prey as they serve as a good hunting spot for them. These birds make their nests in the branches of tall trees. Among their other habitats, marshes are also a common spot. Hence, they were once called a 'marsh hawk'. A marsh can be a good place to hide their nest and hence, marshes are a good place for northern harriers.

Who do northern harriers live with?

Northern harriers are usually solitary birds in nature. However, during the season of winter, these birds are known to migrate to warmer places where they usually travel in small flocks to the warmer Central states of the USA.

How long does a northern harrier live?

Since these North American birds are usually found in the wild the accurate lifespan of these birds is very difficult to estimate. The highest known lifespan of a northern harrier was known to be approximately around 16 years 5 months.

Like the majority of birds, these North American birds also depict courtships or mating rituals. The male species of these birds fly at a very high altitude and then they dive down to lower altitudes at a very high speed. These special dives are often accompanied by spinning patterns and twirling in the air. Polygynous nature is often seen among the male species of these birds and thus, as a result, a male northern harrier is often known to have more than a couple of mating partners, however, females are known to be monogamous. The nest of these birds is made by the females on the ground or on raised places. The nests of these birds are often found to host around 15-20 individuals and form loose colonies. The male species also showcase interesting characteristics. These birds are extremely territorial and are known to attack others that approach the nests. When the eggs are incubated by the female species, the male brings food and calls the female, but doesn't approach the nest.

Though the numbers of northern harrier or the Harrier populations are on the decline, the International Union for Conservation of Nature or the IUCN Red List has listed the species as Least Concern. However, the loss of the natural habitat is mainly the sole reason for the steady decline of these species. As the northern harrier is a migratory bird, it is thus protected by the Migratory Bird Treaty. The Convention on International Trade in Endangered Species of Wild Fauna and Flora, or CITES, has listed this species in Appendix II.

The features of a northern harrier make them very distinct from any other hawks or raptors from a long distance. Their powerful wings help them to glide and fly. These birds have special feathers around their face and ears. In their wings, they have a distinct white rump patch that becomes extremely visible when they fly. The color can either be brown or grey depending on the sex. The male birds are grey in color and often have white specks on their chest, while the female bird is brown and has white markings under their wings. Young harriers showcase brown eyes while the adult harriers have yellow eyes.

The northern harriers can be considered cute. This slender medium-sized raptor has somewhat small heads and has owl-like facial features which makes them extremely adorable birds of prey.

These birds are extremely vocal birds and thus communicate with one another via kek or quik calls. These birds are known to be quite loud when they are found in the vicinity of their nests. Apart from mating calls, these birds also showcase distress calls that are high pitched and are used by the bird to inform others about impending danger.  These birds also have a particular food call which is predominantly used by the females during the breeding season. The 'food call', unlike the name, is not a call of the harrier when they locate prey. The young birds also emit small chit sounds which can be termed as begging calls and are used in response to seeing their parents.

How big is a northern harrier?

How fast can a northern harrier fly?

Northern harriers are speedy flyers however the exact speed of their flight is not calculated. These raptors are known for their wing shape. They take flight with their wings held in a posture that is in V-shape. They take this posture during flight and gliding which is a trademark of these species. During a high flight, these birds are also known to fly in a shape that depicts a sine curve on a graph. This is characterized by the bird stretching its wings to the farthest and turning on its back like a corkscrew. This particular flight pattern is also known as sky dance. During flight, their white rump can be spotted.

How much does a northern harrier weigh?

Northern harriers are medium-sized birds. In these species, the females are generally larger in size and weight in comparison with the males. The average weight of the northern harrier is 10.2-21.1 lb (290-600 g). The females weigh around 1 -1.3 lb while the males weigh 0.5-1 lb.

What would you call a baby northern harrier?

The feeding habit of the northern harriers differs from habitat to habitat. These birds are carnivores and are extremely good predators. If there is an abundance of small mammals in their habitat, then these birds exclusively prey on these small animals. These birds are known to feed on a variety of small animals like snakes, frogs, smaller birds, and small vertebrates. These birds are also known to store food and consume them at a later timer. The hunting of the northern harrier is extremely interesting. These birds hover or can be seen flying low and glide at a slow speed when they locate prey, for example, small mammals, and then dive suddenly to catch them.

Yes, these are birds of prey and belong to the family of hawks. They are extremely intelligent animals also well as dangerous animals. They are known to kill their prey with the help of their sharp and long claws.

These raptors will not make good birds as they are extremely dangerous. They are predatory birds and they should be left alone in their own natural habitat. Moreover, if ever do these birds feel threatened they are known to attack other animals to save themselves and their family. During the breeding season, these characteristics are vividly depicted by the territorial nature of these birds in protecting their nests.

Unlike other birds of prey, these raptors hide in shrubs and in vegetation, and then at a suitable point, they attack their prey.

According to the Cornell Lab of Ornithology, these birds can be called leapfrog migrants, meaning, they travel far south, even further than the habitats of southern birds of the species.

How do northern harriers feed?

During the mating season, a wonderful and unique feature is observed among these birds. The male species collects the food and releases the food mid-way in the air. The female species of the bird then catches it and devours it.

How long do northern harrier chicks stay in the nest?

These birds have a nestling phase of two weeks. So after a span of 14 days, the young hatchlings can leave their nests.

Here at Kidadl, we have carefully created lots of interesting family-friendly animal facts for everyone to discover! Learn more about some other birds including the chickenhawk and the shrike.

You can even occupy yourself at home by drawing one of our Northern Harrier coloring pages.