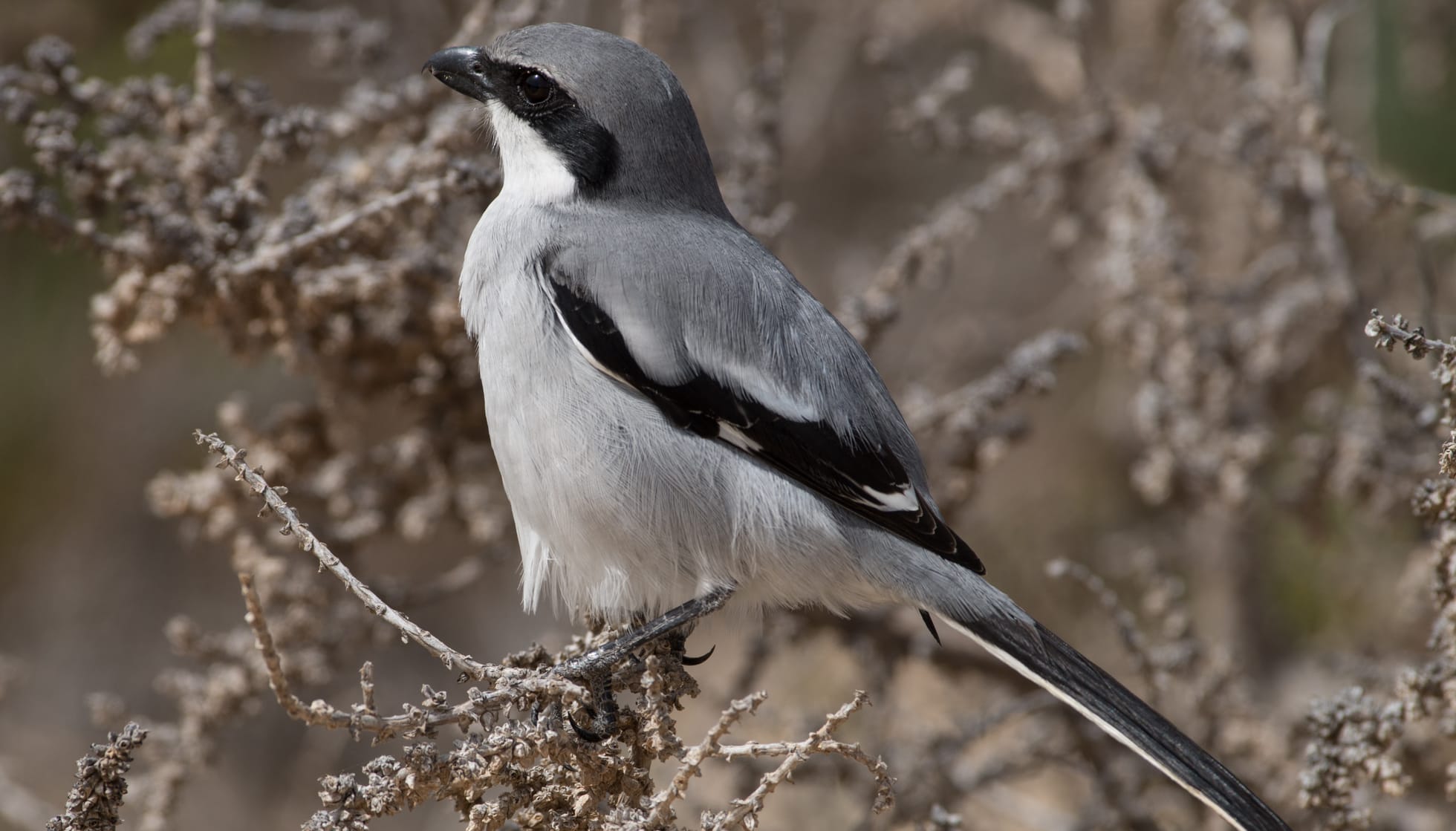 Have you heard of this fascinating bird, shrike? Are you interested in knowing more about them? Well, read on as we share some interesting facts about this bird.

Shrikes are medium-sized predatory songbirds. There are about 33 species of shrikes, and most of them have a mix of black, white, brown, and blue feathers. Its family name, Laniidae, is derived from the Latin word for butcher. They share certain similarities with other birds of prey. Still, it doesn't have strong talons that are characteristic of birds of prey like eagles, hawks, and falcons. That's why it hunts its prey and kills them by impaling them on barbed wire, thorns, or sharp objects. Due to this unique hunting style, it is also known as butcherbird. Like other predatory birds, its beak is hooked, which helps it to catch its prey. The name shrike is because of it's harsh call. It comes from an Old English word that means ‘shriek’

If you love to read about birds, we have more interesting content here. Check out our articles on pine warbler and hummingbird facts once you're done with this one.

Black and white, gray, and brown

What type of animal is a shrike?

A shrike is a predatory songbird. They hunt during the day and are diurnal. It is rare for songbirds to be so lethal, and perhaps that's the reason this bird is considered unique.

What class of animal does a shrike belong to?

How many shrikes are there in the world?

There are 33 recognized species of shrike birds under four genera. We can estimate that there are hundreds of thousands of these birds in the world as it is not possible to have a true count. The population of the loggerhead shrike alone is estimated at around 4.2-7 million.

Where does a shrike live?

These birds live in the open country where short vegetation is plenty. They prefer to build their cup-shaped nest with dried grass and twigs on bushy shrubs or low trees and perches, particularly those with spines or thorns, as it helps them impale their prey and provide safety from predators. They are commonly seen around agricultural fields, pastures, savannas, and orchards, where they can find their prey easily.

What is a shrike's habitat?

Most of the species of these birds are prevalent in Eurasia and Africa. Only two species of shrikes - the loggerhead shrike and the northern shrike are found in North America. No species of this bird is known to live in South America and Australia. Many other species of butcherbirds occupy a similar niche in Australia, but they are not the same as a shrike. Since these birds' regions are varied, they are known to dwell in different types of habitats. Most bush-shrike species reside in Africa, the true shrikes live in sub-Saharan Africa, and the loggerhead shrike's region is North America. They live in open habitats, steppes, and savannahs in particular. Some birds of these species are known to live in the forest as well. The shrikes that dwell in the northern latitudes like the northern shrike migrate to warmer locations when the winter season sets in.

Who do shrikes live with?

Shrikes are territorial, and typically they dwell in groups of six or more pairs. During the breeding season, they tend to get solitary.

How long does a shrike live?

The average lifespan of a shrike is seven years. In the wild, the typical range of their lives is 4-12 years.

Typically, shrikes form monogamous pairs, although mating outside the couples is also seen in some species. The males display certain behaviors to attract the attention of the females and coax them into mating. Typically, the courting begins in March and continues through April and May. To entice the females, the males show off their hunting and cache-building skills. It also offers food to the female as gifts. The males call out to the females, sings, and while looking at them, flutter their wings. At first , the females typically ignore the males, but they join the male in its antics when persuaded more. A shrike uses twigs and grasses to build its nest, and the female shrike lays about six to seven eggs in their cup-shaped nests. The eggs' incubation period is about two to three weeks, after which the chicks are born. The male shrikes provide the food while the females incubate the eggs; thus, the female shrike doesn’t have to leave the eggs during the incubation period. The parents receive help from other adult shrike helpers or their previous grown offspring to feed and rear the chicks.

Shrikes, in general, are marked as a species of Least Concern as per the IUCN Red List of Threatened Species. However, some of these bird species, including the loggerhead shrikes, six bush-shrikes species, and two helmet shrikes species, are listed as Endangered. The main reason for this is habitat loss due to the conversion of grasslands and croplands to residential spaces. Another reason cited for the gradual decline in its population as per the Cornell Lab of Ornithology is the increased use of pesticides in crop fields. The insects these birds prey on are likely pesticide-laden, which eventually affects their health and overall age.

The tiny hook in the loggerhead shrike's beak is prominently visible. Typically these songbirds have a combination of gray, brown, or black and white plumage. Since there are many species of these birds, some of them look strikingly different. For example, the shrikes from the genus Corvinella have elongated tail feathers. Similarly, the magpie shrike also called the African long-tailed shrike, sports scattered white patches and has a long floppy tail. The great gray shrike is typically pale gray in color with a black mask.

They look like cute medium-sized birds, but don't be fooled by the looks; they are excellent predatory birds.

They communicate through strident calls, body movements, and food caches. They have different calls for raising the alarm, attracting prey, courtship, and nesting.

How big is a shrike?

Depending on the species, the shrike bird size range is about 6.3-9.8 in (16-25 cm). They are medium-sized songbirds and are about the same size as mockingbirds.

How fast can a shrike fly?

How much does a shrike weigh?

What would you call a baby shrike?

A baby shrike is generally referred to as a chick.

These birds feed on small insects and vertebrates. Their typical prey include spiders, lizards, grasshoppers, mice, and small birds. They are also known to hunt large prey like small rodents and snakes by impaling them on spikey bushes, thorns, and barbed wire. During the summer months, their diet consists mainly of insects, and in winter, their palate gets a little varied.

Yes, they are pretty aggressive when it comes to catching their prey. The particular characteristic of impaling and killing its prey has shaped many fictional characters in books and movies.

No, these birds are not meant to be kept as pets. They are wild birds and flourish in the open. They need space to fly and hunt prey. In many places, the law forbids keeping these songbirds as pets.

'Abattoir' and 'watch' are the words used to refer to a group of shrikes.

These birds are vulnerable to larger birds like crows and magpies, who are their predators. Their nests are also in danger of being attacked by snakes.

Even though they are not true birds of prey, they exhibit specific behavior like those of raptors.

What is another name for shrikes?

Shrikes are also known as butcherbirds. This is because of the impaling skills they exhibit when attacking their prey.

How do shrikes kill?

A shrike bird perches on a high branch, standing upright to spot its catch. It grabs prey like insects, lizards, among others, with its beak and shakes it vehemently to kill it. It is also known to visit domestic bird feeders where it can prey on other smaller visiting birds. When hunting large prey like rodents and snakes, some shrikes species like the loggerhead shrike engage in impaling the prey on sharp objects like barbed wire, spikes, and thorns. They make up for the lack of raptors-like talons by impaling. It also helps them peck the prey into tiny pieces and makes it easy for them to consume it. It also serves them as a food cache which they can use for later consumption when preys are scarce. This larder-like arrangement for the supply of food also helps these birds to attract mates.

Here at Kidadl, we have carefully created lots of interesting family-friendly animal facts for everyone to discover! Learn more about some other birds, including pileated woodpecker or scarlet macaw.

You can even occupy yourself at home by drawing one on our Shrike coloring pages.