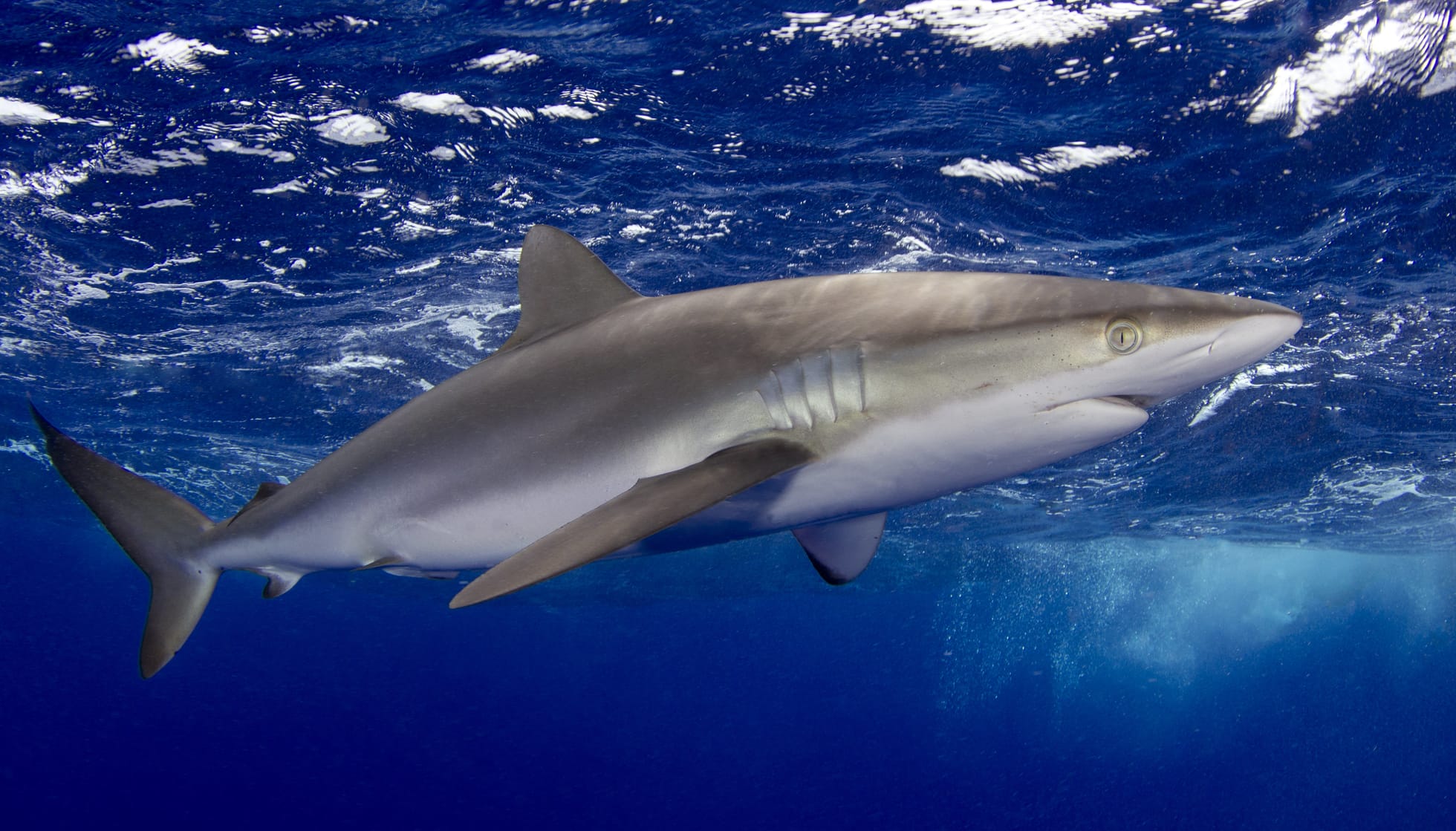 The silky shark (Carcharhinus falciformis), along with the blue and oceanic whitetip sharks, is one of the three most common pelagic shark species and is one of the most abundant large oceanic species on the planet. It was discovered in 1839.

Its common names in English include blackspot shark, grey whaler shark, olive shark, reef shark, and ridgeback shark. It belongs to the order Carcharhiniformes, family Carcharhinidae, and genus Carcharhinus. The silky shark genus name Carcharhinus is derived from the Greek words' karcharos' and 'rhinos', which mean 'to sharpen' and 'rhino'. Hence the Greek name technically means a sharpened rhino.

Read on to learn all about this shark. If you like reading this, you must also read our false catshark and great white shark facts.

What type of animal is a silky shark?

A silky shark is a fish, but like all other sharks, its skeleton is made of cartilage, which is similar to mammals.

What class of animal does a silky shark belong to?

How many silky sharks are there in the world?

Where does a silky shark live?

Silky sharks live in the oceans. They are found in deep water bodies ranging from Massachusetts to southern Brazil, including the Gulf of Mexico and the Caribbean Sea to Uruguay and Sri Lanka to Western Australia. In the Gulf of Mexico, it is often caught as a bycatch in the tuna fisheries. It happens to be the most important species of shark in the Maldives and Sri Lanka. It is also found in the tropical and subtropical waters in the Atlantic, Pacific, and Indian Oceans. Populations of silky sharks in both the Pacific and Indian Oceans also participate in migratory patterns by moving from the reefs to the open ocean in the winter months. Apart from the Indian, Pacific, and Atlantic Oceans, silky sharks are found in the Red Sea, in Australia, Southern Baja, California, northern New Zealand, and Northern Chile too. They are also found near Spain, Northern Angola, and Cape Verde.

What is a silky shark's habitat?

Who do silky sharks live with?

The silky shark does live in packs in general, and it tends to pursue large schools of fish, which is also why it is often caught as bycatch, but then it depends on the shark if it wants to live alone or in a pack. Every silky shark is unique.

How long does a silky shark live?

This species of shark has an average lifespan of about 23 years.

Pheromones are released by male silky sharks, although it's unclear if they're used to lure partners, fend off rivals, mark territories, or a mixture of the three. Furthermore, studies have shown that there is no sexual segregation within silky shark populations. Pheromones do not play a part in deciding social structure. Silky sharks breed all year round in tropical waters, but only during the summer months in warm-temperate waters like the Gulf of Mexico.

Because of their long gestation period, a low number of offspring, and slow growth rate, silky sharks are considered Near Threatened on the IUCN Red List and are vulnerable to over-fishing. In Japan especially, they are the most common target species of shark fisheries because they have a small number of offspring and slow growth, and they are also caught as bycatch along with tuna. Over a 19-year period (1984-2005), the number of silky sharks is estimated to have declined by 85% and is beginning to decline by even greater margins. However, owing to the under-reporting of catch rates and a lack of population control, these figures are unclear. States and areas that allow fishing for this species have been urged to work together on its protection, but no regulation strategy has been established as of now.

The silky shark (Carcharhinus falciformis) has skin made of densely packed scales called dermal denticles. The size and density of these dermal denticles give their skin a smooth and silky texture, thus giving them the name of 'silky shark'. It can be distinguished from other sharks by the silky texture of skin and second dorsal fin, which has a very long free tip at the rear. The first dorsal fin is small and rounded. The first dorsal fin is farther back (on these) than on any other species of shark. The second dorsal fin is small with a long, trailing tip and elongated pectoral fins. The pectoral fins are elongated and sickle-shaped. The ventral surface of the pelvic and pectoral fins can have darkly colored tips.

They are not at all cute and, in fact, are very gross and dangerous. Their skin has a smooth, silky texture, and they have sharp scales on their skin which gives them a very fearful and chilling appearance.

There is not enough research to determine the method of communication of silky sharks except in the process of reproduction.

How big is a silky shark?

How fast can a silky shark swim?

Silky sharks have adapted themselves to be extremely fast and persistent swimmers because of the low availability of prey in their natural habitat. Their exact speed is unknown.

How much does a silky shark weigh?

Silky sharks weigh in the range of 420 lb (190 kg) and are one of the largest species of shark in the Eastern Atlantic and in Eastern Pacific oceans. The largest silky shark ever weighed 600 lb (272 kg).

What would you call a baby silky shark?

Baby silky sharks are called pups. A female silky shark gives birth to around 15-20 pups at a time. The highest number of pups a female silky shark has ever given birth to is 20. The pups spend their first months on the outer continental shelf in comparatively sheltered reef nurseries, where they develop rapidly before venturing out into the open ocean. Small silky sharks are commonly associated with schools of tuna because these sharks often follow schools of tuna fish accompanied by bottlenose dolphins.

The silky shark is known to be very aggressive. The massive silky shark size and slashing silky shark teeth make it potentially dangerous to humans, and incidents of attacks on divers have been known in the past. Attacks are still uncommon because humans hardly access their oceanic habitat. Silky sharks are prized for their fins, as well as their skin, hide, liver oil, and jaws to a lesser degree.

Silky sharks (Carcharhinus falciformis) are extremely aggressive and dangerous creatures, and silky shark attacks on humans are not unknown. Hence, the idea of keeping them as pets is absurd and unthinkable. Silky shark and human interaction is not encouraged.

Many silky shark adaptations are interesting to note; the silky shark has adapted itself to become a quick, curious, and persistent predator in its oceanic habitat because food is often scarce in its habitat, and they have a very sharp sense of hearing which acts as an advantage for them in locating prey and predators. Along with that, silky sharks have also been known to feed on the dead body of whales.

What do silky sharks do when threatened?

Silky sharks (Carcharhinus falciformis) have been observed with their head raised, back arched and silky shark tail lowered, a posture believed to be a form of threat display. This is how they protect themselves from predators. Silky shark predators include larger sharks and killer whales.

How many pups do silky sharks give birth to?

Here at Kidadl, we have carefully created lots of interesting family-friendly animal facts for everyone to discover! Learn more about some other fish, from our black grouper facts and guppy fun facts pages.

You can even occupy yourself at home by coloring in one of our free printable Silky shark coloring pages.