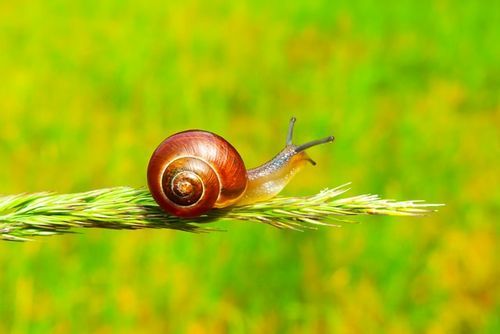 Snails are gastropods that have a shell that is large enough for them to hide into when they are attacked by predators.

Snails are abundant in nature, like the garden snail and sea snail, but certain species of snails are close to being endangered or becoming extinct. Snails are distinctive animals due to their outer shell that is coiled and hard in nature. All true snails have these large protective snail shells (made up of calcium carbonate), which they can retract into in cases of predator attacks. Snails are divided into three groups, land snails, freshwater snails, and sea snails. Aquatic snails make up a large number of species.

If you liked these snail facts, then you'll surely like these facts about apple snails and sea slugs!

Least Concern to Endangered (depending on species)

Helix, Amphidromus, Aegista, Theba, and much more (depending on species)

What type of animal is a snail?

Snails are mollusks with hard exoskeletons or a shell that comes in a range of sizes, from small to medium to large, like the Giant African land snail. Snails belong to the invertebrate section of animals, as they do not have a vertebral column.

What class of animal does the snail belong to?

Snails belong to the Gastropoda class. Gastropods are commonly referred to as snails and slugs. Gastropods comprise many species of snails, such as the land snail (garden snail most common) and slugs.

How many snails are there in the world?

Where does a snail live?

As explained earlier, snails can be found all across the world in different types of habitats, including ditches, deserts, and cold places.

What is the snail's habitat?

All the snail species are diverse in nature and can be found in almost all habitats, be it natural, urban, or uninhabited areas. The most commonplace that land snails inhabit are gardens, in the form of garden snails, fields, and banks of rivers.

Sea snails and freshwater snails are found on the surface of the water body they inhabit.

Gastropods are the only mollusks that have adapted to all types of habitats on Earth and continue to thrive!

Who does a snail live with?

Snails are solitary in nature except for a few snail species and are usually harmless to humans. A large population of garden snails in gardens or fields may cause the destruction of vegetation, so snail pest control becomes necessary in some cases.

How long does a snail live?

While larger species of snails can live up to 10 years, most snails (land snails) barely live for two to three years in the wild. The Helix pomatia is known to have the longest lifespan out of all snails, which is 25 years.

Snails have a variable period of sexual maturity which can happen anywhere from the age of six weeks to five years, depending on the species. Snails are hermaphrodite in nature, meaning they have both male and female reproductive organs. Individuals mostly mate rather than self-fertilize.

Snails, like most animals, reproduce egg cells and sperm cells, which fertilize the female's eggs.

In cases of aquatic snails, males release the sperm cells into the water, and they swim to the eggs in the female snails.

Snail eggs are gelatinous in nature and have no shape.

A large number of snail species, be it land or aquatic, are endangered because of human interferences, like the introduction of species that are invasive, climate change, and pollution.

For instance, the Helix Pomatia, or commonly known as the Roman snail, it is protected under Schedule 5 of the Wildlife and Countryside Act in England.

Snails are small animals that are related to non-shelled slugs and can be found in the sea as well as on land. Sea snails are often listed as marine snails and are found mostly in water bodies.

The land snail has a strong muscular foot. A snail's mucus enables it to crawl over surfaces that are rough in nature. They have hard shells for protection from predators and have tentacles on their heads, which they use to navigate and see around their surroundings.

Yes, they are! Even though they look slimy, these animals are cute as they are small and docile.

Snails use the tentacles on their heads in order to communicate with others through their tactile senses. Much like slugs, snails also leave mucus behind to be interpreted by others. Chemical residues left behind are also another means of communication snails use. Snails have eyes to see their surroundings and act accordingly, as they lack the ability to hear.

How big is a snail?

How fast can a snail move?

Snails are slow creatures since they use muscular pedal waves to move along, and snails leave a trail of mucus that is foul-smelling. Their slow pace of movement is also due to their heavy shells that provide protection to them.

How much does a snail weigh?

Snails can weigh from nothing (Angustopila dominikae), weighing 2 lb (900 g), to almost 39.6 lb (18 kg), as in the case of the Syrinx aruanus, commonly known as the Australian trumpet.

No particular name has been assigned to either sex of snails.

What would you call a baby snail?

Young snails are mostly referred to as baby snails.

An interesting fact about snails is that these creatures can be herbivorous, carnivorous, and omnivorous, depending on the species to which they belong!

No, they are docile, but some do have venom in them. However, freshwater snails often carry a parasitic disease called schistosomiasis which you can contract by swimming or wading near them. This disease can be deadly.

Snails make excellent pets! Even though they can't feel emotions like love, they are great pets. And a pair of them will be great as one snail will dine on the same food source as another snail! They are quiet and don't take up much space, with a simple, inexpensive setup being enough for them to live in!

Some interesting facts about snails are that some terrestrial snail species have a shell that is hairy!

The Charonia tritonis can grow as big as a foot and a half long, and this snail's venom is deadly!

Some freshwater snails have lungs to help them breathe underwater instead of gills.

Snails are mollusks, meaning they are closely related to clams and oysters, which might be the reason for a snail's slimy nature!

Snails are hermaphrodites and have the reproductive organs of both sexes, making it hard to differentiate between a male and a female.

The largest living snail is the giant whelk, which is found mostly in Australia and is a marine gastropod with a shell length of around 3 ft (9.4 cm)!!

Snails have the most teeth of any animal! A garden snail has around 14,000 teeth, and other species have more than 20,000!

Snails make sounds while eating. They hiss, squeak, and make other sounds such that of a whistle. A whoosh can be heard when these snails go into their shells.

Where do the snails originate from?

Gastropods, as per scientists, have been around since 541-585.4 million years ago! These animals have adapted to all kinds of changes in their habitats and continued to thrive in them.

Here at Kidadl, we have carefully created lots of interesting family-friendly animal facts for everyone to discover! Learn more about some other animals including field voles and American minks.

You can even occupy yourself at home by drawing one of our eastern chipmunk coloring pages.‍