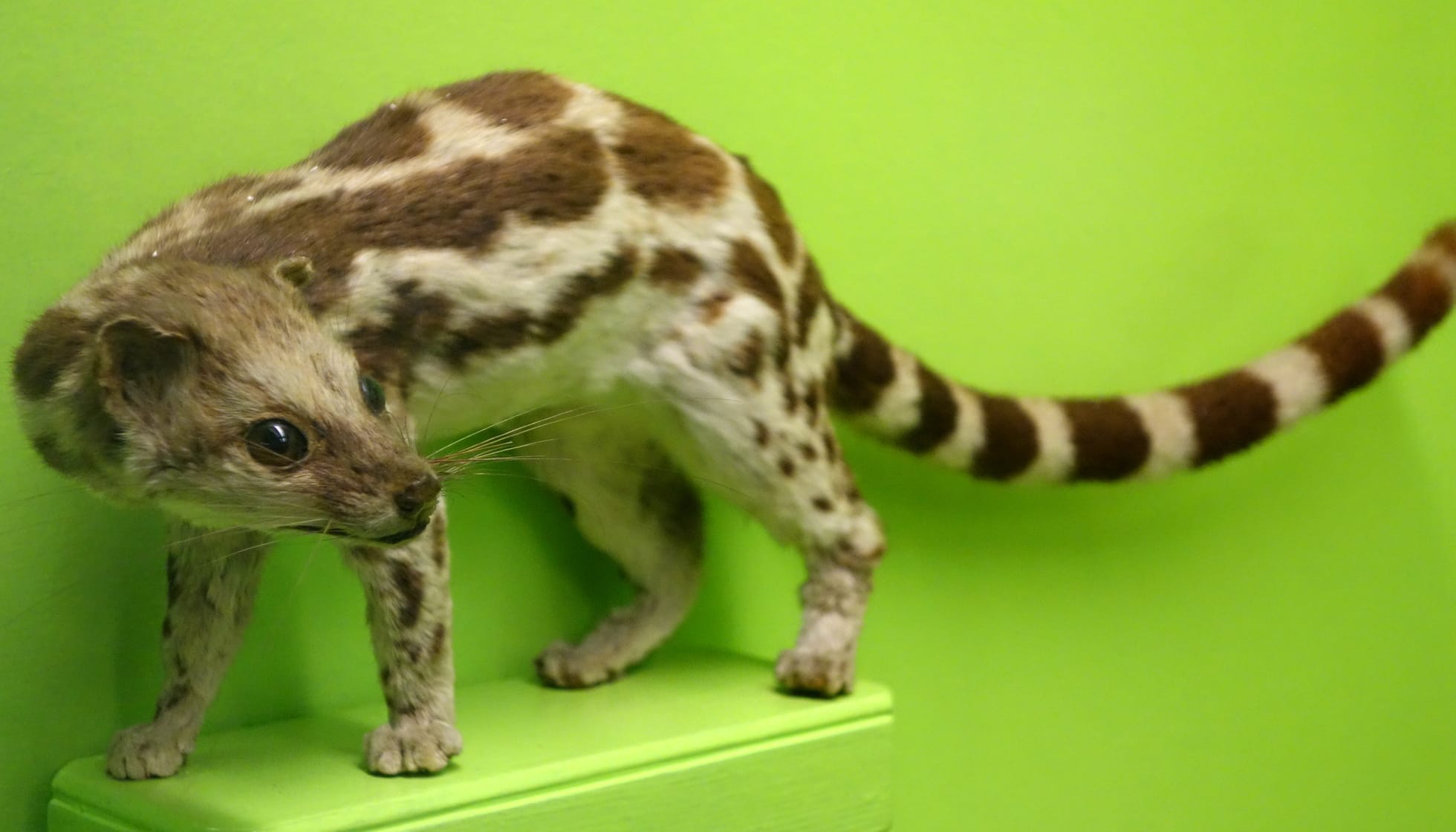 Let us learn today about one of Asia's most reclusive and shy mammals: the spotted linsang. Belonging to the genus Prionodon, the spotted linsang (Prionodon pardicolor) has gained some fame due to its secretive nature. These linsangs have been very rarely spotted in recent times owing to their nocturnal and somewhat arboreal nature. They share a lot of common taxonomic specifications with civets and felines. Ranged across southeast Asia, the linsangs are found in Vietnam, Laos, Thailand, and Myanmar. They have also been observed in the forests of Nepal and northeastern India, along with parts of southern China. Despite having such a large range and being deemed as Least Concern species by the International Union For Conservation Of Nature, many of the countries have these animals on their protected list.

So, read on if you want to learn more about these mysterious creatures. For facts on other animals, take a look at the black-footed ferret and ferret-badger.

What type of animal is a spotted linsang?

What class of animal does a spotted linsang belong to?

The spotted linsang belongs to the class of Mammalia or mammals. They are part of the order Carnivora and the family Prionodontidae.

How many spotted linsangs are there in the world?

Due to their reclusive nature, not a lot of data is available on the total population of the spotted linsang. There is various research that shows us that these animals are recorded very rarely and were earlier thought to be distributed unevenly throughout their habitat range. Yet, many organizations like the IUCN states that these animals are Least Concern while mentioning that they might have a trend of a decline in population.

Where does a spotted linsang live?

The spotted linsang (Prionodon pardicolor) is found in the tropical forests of southeast Asia. This civet species, belonging to the order Carnivora, are thought to be native inhabitants of Vietnam, Thailand, Laos, and Myanmar. Apart from the range in and around Vietnam, they have also been spotted in areas like Nepal and northeastern India. In parts of India like Sikkim and northern Bengal, they were thought to be quite prevalent at one time.

What is a spotted linsang's habitat?

Being a species of civet mammals, the spotted linsang has characteristics that are similar to civets like the masked palm civet. With their habitat being forests in tropical areas, the animal has been recorded many times foraging on a tree. While they were considered to be arboreal in nature (living in a tree), new research has shown that they spend a lot of time on the ground. However, these slender mammals are nocturnal and only ever hunt or forage during the night. Like all true civet species, they spend their day sleeping in tree hollows. The slender body, along with their claws, helps the spotted linsangs to run on tree branches.

Who do spotted linsangs live with?

A civet is generally considered to be a solitary and reclusive animal. Belonging closely to their family, the spotted linsang is no different. While not much is known about the social structure of the animals in the wild, they are thought to be solitary.

How long does a spotted linsang live?

Unfortunately, there hasn't been a confirmed lifespan for the spotted linsang. However, there are some sources that suggest that they live within the age range of 9-11 years. This is perhaps correct as the banded linsang is also thought to have similar longevity. This is much less than the average lifespan range of the African civet.

While very little is known about the breeding and reproduction amongst the spotted linsang, we can confirm that they breed two times a year, breeding in the months of February and August. These animals have a litter size of one to two young pups. Mothers are the ones who take care of the young and wean them. There has been little evidence of males helping out in raising the young, but again the data is inconclusive. Certain reports suggest that the spotted linsang mother has a gestation period of 60-70 days.

While according to the evaluation done by the International Union For Conservation Of Nature, the spotted linsang, which is close relatives with the civet family, have been categorized as Least Concern. Yet, in countries where the species Prionodon pardicolor is native to, most have them protected due to the species decline in population. With the linsangs living in trees, the spotted linsang has been affected greatly by the clearing out of trees and forests.

The species Prionodon pardicolor or the spotted linsang is quite unique in its appearance. Being closely related to the family of civets and felines, they have a slender bodies. Nocturnal linsangs have dark brown and yellowish-buff fur that is spotted in rows. The pointy ears and dark eyes are well-adapted for their nocturnal life. The species have a long tail that has dark rings on it. The total number of dark rings on the tail varies between the range of 8-10. Interestingly, the spotted linsang skull and head resemble that of a fox.

*Please note that the main image and this image are of a Prionodon linsang, similar to the spotted linsang. If you have an image of spotted linsang, please let us know at [email protected]

This species of mammals are very cute to look at despite being wild animals.

Again, due to a lack of data, we do not really know how they communicate. It has been speculated that these species communicate via scents and sounds in a manner akin to the civet species.

How big is a spotted linsang?

How fast can a spotted linsang run?

No such data is unavailable to determine the exact speed of the spotted linsang.

How much does a spotted linsang weigh?

This species has an average weight range of 1 lb (0.45 kg); however, they may be lighter or slightly heavier than this.

What would you call a baby spotted linsang?

A baby spotted linsang can be referred to as a pup.

While the species belong to the order Carnivora, they are thought to be omnivores. Using their claws to run amongst the tree branches, they hunt birds, frogs, small snakes, and rodents as part of their diet. Surprisingly, the diet also includes fruits. They are also known to feed on carcasses. As they are wild animals and primarily carnivores, it is assumed that they will attack if threatened.

No, being such elusive wild animals they will not make for good pets.

The spotted linsang is often confused with the spotted African linsang.

You can easily pronounce linsang in this way: lin-sang!

Here at Kidadl, we have carefully created lots of interesting family-friendly animal facts for everyone to discover! For more relatable content, check out these Borneo bay cat facts and Barbary lion facts for kids.

You can even occupy yourself at home by coloring in one of our free printable spotted linsang coloring pages.