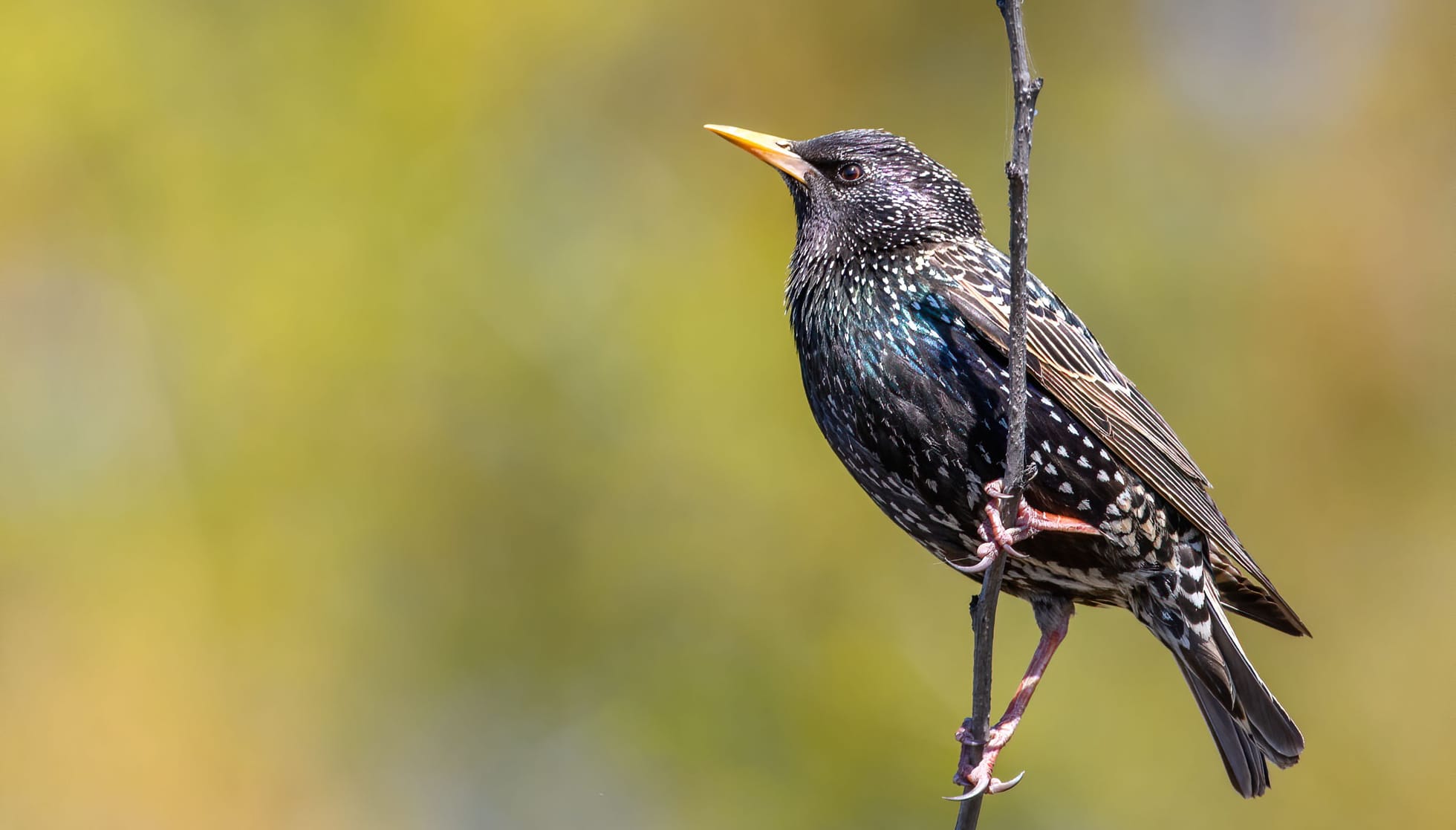 Some birds are easily spotted and live in urban areas. Common starlings, Sturnus vulgaris, are such birds that are very common, with a high population and seen everywhere. Starlings have colorful plumage and are beautiful birds. They fly in big, tight flocks and are well known for their graceful, synchronized dances. These birds migrate in winter to Northern Europe, Africa, and Asia from the south.

These birds, though small can be very aggressive and noisy. Invasive species of starlings compete with other native birds and wildlife for habitats to build their nest, especially during the breeding season. Starlings also destroy crops and are a pest to farmers.

You may also check out the fact files on metallic starling and violet-backed starling from Kidadl.

What type of animal is a starling?

Starling is a type of small-sized passerine bird belonging to the family Sturnidae. Some introduced starlings are considered invasive species and a threat to native wildlife.

What class of animal does a starling belong to?

Starlings belong to the class Aves, under which all birds fall.

How many starlings are there in the world?

There is around 30 Genus of starlings in the world. The estimated global population of common European starling Sturnus vulgaris marks up to 150 million individuals. The population of common starlings is currently decreasing, especially in Europe. This decrease may be due to habitat loss and lack of feed. They migrate from the South to the East during the winter.

Where does a starling live?

The European starling Sturnus vulgaris are distributed widely across the globe. They are native to the Northern Palearctic region (Siberia to the Mediterranean), Eurasia. In North America, the European starlings are an introduced species. In modern times, they are found on almost all continents.

What is a starling's habitat?

Common starling Sturnus vulgaris live in urban areas, around people. They are found in grasslands, farmlands, golf fields, parks, and playgrounds. Common starlings frequent open forests and shrub jungles. They also nest in coastal areas. Starlings are not found in mountain areas and are exclusively seen in lowlands. They nest in cavities and crevices. It also roosts inside buildings.

Who do starlings live with?

During winter migration, the starling flocks together, this is starling murmuration. They flock and fly together displaying various formations. The flocks ensure safety from predators and warmth during winter. These flocks also make the exchange of information very easy.

How long does a starling live?

The average lifespan of a common starling is very low compared to other birds. It ranges from two to three years only similar to the California quail.

The breeding season of starlings is from spring to summer, which varies slightly each year. Starling lays eggs three times a year in each breeding phase and roosts. Starling eggs are smooth, shiny light blue in color. The female starling bird roosts their eggs for around 11 days. Starlings are polygynous in nature and have high fertility. They also exhibit post-natal parental care. The adult male and female starlings feed the chicks small and soft food. They also clean the nest by removing the chick's feces. After three weeks the young starlings leave their natal nest and form flocks with other birds.

Starlings are small birds with iridescent glossy plumage on their neck, breast, and back. They have black wings with hints of purple and green. Sexual dimorphism exists in male and female starling birds. Their winter plumage has white-colored flecks on black as the tip of their feathers erode. The eyes of starlings are dark brown in color and their legs are reddish-brown. During the breeding season, they have yellow bills similar to a myna and black beak otherwise. Some species like superb starling are very colorful.

If you can ignore the ruckus made by a group of starlings, they can be quite adorable just like lovebirds. They come in various colors and have beautiful plumage.

European starlings are a noisy species of starlings. They have high vocal capabilities. They make various starling sounds like warble, songs, calls, whistle, click, chirrup, creak and gurgle. Starlings are only silent during the molting period. The starlings make aggressive noise to warn others of wildlife and also make shrieking starling calls while attacking other birds. They are well known for their capabilities to mimic. They can copy sounds made by other animals. Captive starlings are also known to talk like humans. Some are song birds.

How big is a starling?

How fast can a starling fly?

How much does a starling weigh?

There are no separate names.

What would you call a baby starling?

A baby starling can be called a chick or a hatchling. Young starlings are called juveniles.

Common starlings are omnivores, they feed on almost any edible food that fits in their bill. They feed on insects, invertebrates, and tiny vertebrates. Starlings also feed on seeds, fruits, berries, and plants. Their favorite plants are cherries, plums, and apples.

European starlings are carriers of various transmissible diseases. They pass on diseases like transmissible gastroenteritis, blastomycosis, and salmonella to people and livestock.

Starlings are wild birds but can be kept in captivity. They become friendly with their owners if tamed well. They can also be trained to mimic humans.

Many people kill starlings as they are considered to be a nuisance and set up starling traps. But it is not ethical to kill living beings. Instead, you can cover possible nesting areas to prevent them from building nests or can prevent the eggs from hatching.

They are so excellent at mimicking sounds, that they can even imitate a car alarm and other mechanical sounds.

Grackle vs starling: Common grackles are larger birds that have longer tails than European starlings. Though they look similar, grackle has dark legs, a dark bill, and yellow eyes. Starlings have pinkish legs, a yellow bill, and a dark eye.

Do starlings kill other birds?

Yes! Do not mistake them by their size. The starlings are aggressive and attack other birds to compete for nesting space during the breeding season. It also roosts on the nest of other small birds that they kill. The starlings do not steal eggs, but they do occasionally eat eggs.

Here at Kidadl, we have carefully created lots of interesting family-friendly animal facts for everyone to discover! For more relatable content, check out these rook facts and swallow facts for kids.

You can even occupy yourself at home by coloring in one of our starling coloring pages.