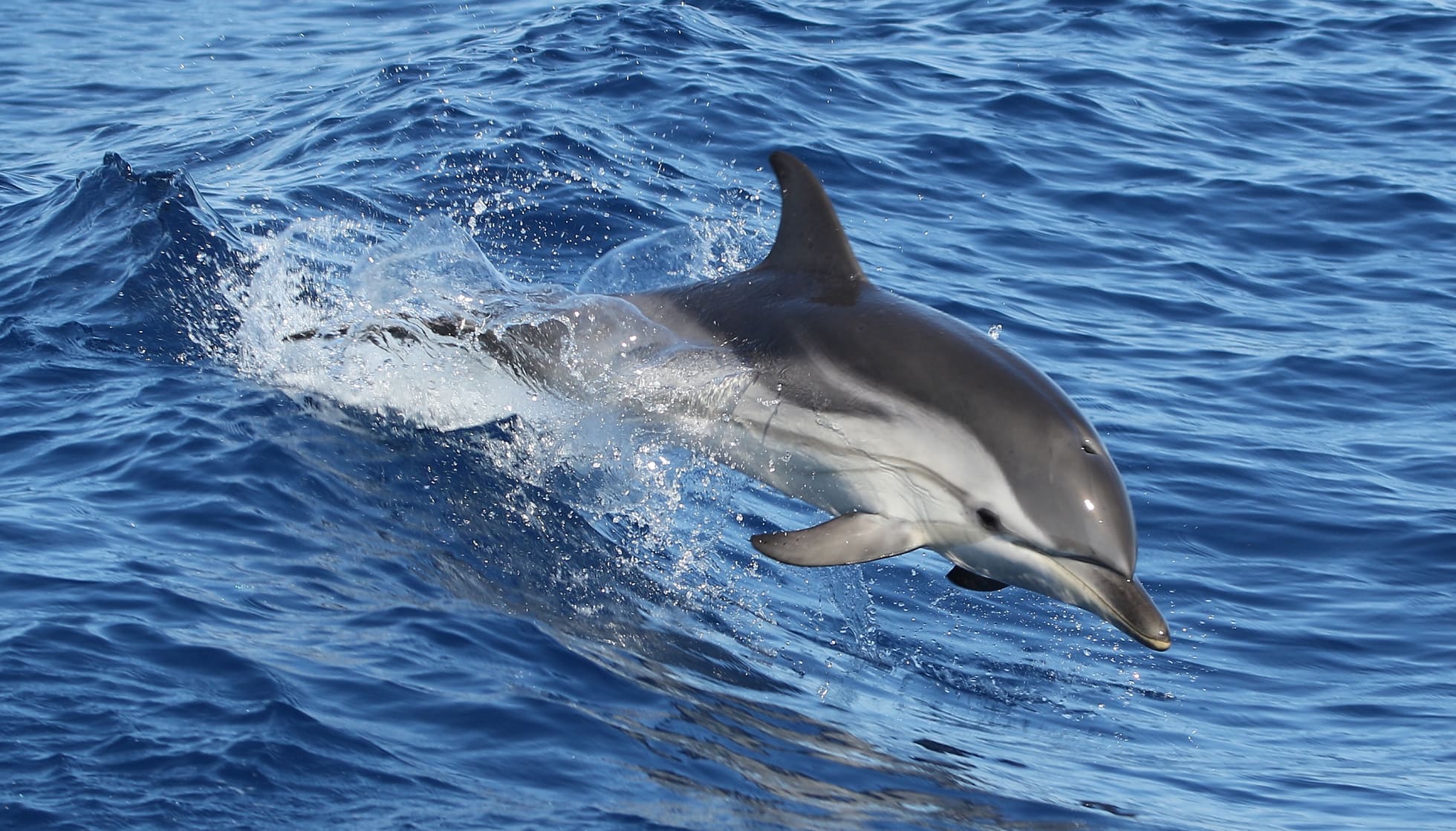 The Striped Dolphin is one of the most playful species found in the world. They are usually located in the warm, temperate water of the Atlantic Ocean and the Pacific Ocean. These species are frequently caught in fishing nets and accidentally taken to fisheries, but they are promptly returned when the error is recognized. Though they are not endangered by any means, their unintended capture in fishing and fisheries does put a solid dent in their population every year. They live close to the surface of the water, and these blue fishes are well known for their playful behavior and their prominent blue stripe across their bodies. The female is almost always slightly smaller than the man, and their diet is carnivorous, with almost all other small fishes that live near the surface of the Atlantic and the Pacific oceans.

Do you want to all about the Striped Dolphin habitat, the Striped Dolphin diet, and the Striped Dolphin adaptations? Then read on for everything you need to know about this water population, its individuals, females, interactions with fishing and fishing nets, their life in the Western Pacific and Atlantic, and more! Also, make sure you check out the ringed seal and the minke whale too.

What type of animal is a Striped Dolphin?

The Striped Dolphin is a type of aquatic mammal.

What class of animal does a Striped Dolphin belong to?

Striped Dolphins belong to a class of mammals.

How many Striped Dolphins are there in the world?

The Striped Dolphins (Stenella coeruleoalba) are a well-studied dolphin present in all of the world's oceans' temperate and tropical waters. There are more than 2 million Striped Dolphins in the world. This species tends to be abundant across its range, but this may not be continuous; low population density areas do occur.

Where does a Striped Dolphin live?

Striped Dolphins live in the ocean. They can be found in the Atlantic and Pacific oceans and the Mediterranean Sea.

What is a Striped Dolphin's habitat?

Striped Dolphins prefer oceanic and deep waters that range from warm temperate and tropical temperate. Striped Dolphin habitats are often present in waters seaward of the continental shelf between 50°N and 40°S, and they are often associated with upwelling areas and convergence zones.

Who do Striped Dolphins live with?

Striped Dolphins are often seen in small, organized groups of 25-100 individuals. However, this species has been seen in a larger population too, with several individuals traveling together. This species is a highly social one, and behavior dictates that they will travel in groups.

How long does a Striped Dolphin live?

Mediterranean Striped Dolphin lifespan is about 55-60 years in favorable conditions.

Their conservation status is Least Concern. They are not thought to be endangered despite being caught by fisheries.

Striped dolphins are tiny, sleek, and brightly colored. The 'stripes,' as the name implies, are the most distinguishing characteristics. A dark gray stripe runs from the beak to the eye, over the flank, and down the underside of the skull. A second stripe extends from the bottom of the eye to the pectoral flipper. The striped dolphins have a characteristic dolphin outline, with blue skin and white to light gray lines extending down the spine: this distinct coloration separates the Striped Dolphins from other dolphin types. A Striped dolphin's skin is usually understood to be smooth and can feel rubbery. The skin is hairless, and also without sweat glands. This marine mammal skin constantly flakes and peels as new skin cells replace old cells.

These sea creatures, Dolphins, interact through a variety of sounds and nonverbal cues. Dolphins, like humans, interact with one another by both vocal utterances and nonverbal gestures. This involves whistles, taps, and burst bursts, which are noisy broadband packets of sound. There are many means for whales and dolphins to communicate with one another. They emit noises, make physical contact, and interact with us.

How big is a Striped Dolphin?

How fast can a Striped Dolphin move?

How much does a Striped Dolphin weigh?

Mediterranean Striped Dolphins males are slightly larger than females. The average weight of males is 160 kg and females is 150 kg.

There is not any specific name for male and female Striped Dolphins.

What would you call a baby Striped Dolphin?

Striped Dolphins are massive, aggressive underwater predators, and engaging with them poses significant health and safety risks to both humans and wildlife. Dolphins at swim-with-attractions have been known to severely injure people by butting them, resulting in lacerations and fractured bones.

The marine mammals, Striped Dolphins, have a reputation for being fun playmates, but they are wild animals and should be handled with care and reverence. Interactions with humans alter dolphin behavior in a negative way. They lose their innate vigilance, making them easy prey for vandals and shark attacks. So it is not advised to make this marine dolphin species a pet.

Striped Dolphins normally hunt in groups using various strategies to get their food. Each of them is a form of 'sheep-herding' in which a group of dolphins circles a group of fish in order to gather them in one place while others begin eating them in turn. Each dolphin would be able to feed more effectively as a result of this.

Killer whales and sharks have been seen preying on marine Striped Dolphins. The population has also suffered mass extinctions as a result of morbillivirus outbreaks in the Atlantic Ocean and Mediterranean seas.

Striped Dolphins are known as 'streakers' by field biologists and fishermen in the eastern tropical Pacific because they escape boats by swimming away quickly.

To protect themselves from danger, these marine organisms employ a variety of defensive mechanisms. They can use their vast intellect, amazing speed, navigation, echolocation, and fly in pods, among other things. In reality, dolphins can frighten and threaten their biggest predator (sharks) simply by swimming in large numbers. Dolphins defend themselves mostly by escaping natural predators by identifying them with echolocation and moving in groups for protection. Dolphins protect themselves by grappling with Striped Dolphin predators when they are unable to escape threats or drive off threats.

How does the Striped Dolphin sleep?

This Atlantic Striped Dolphins in aquariums and zoos, as well as whales and dolphins in the wild, sleep in two ways: they either lie peacefully in the sea, vertically or horizontally, or they sleep while floating passively next to another in water.

There are approximately 44 types of dolphins found in maritime and waterway families and they are located in waters throughout the world. The most commonly acknowledged dolphin species in captivity (such as conservation facilities and zoos) is the Bottlenose dolphin. The biggest sea dolphins include the orca, pilot whale, and bogus executioner whale. The littlest are the New Zealand dolphin and tucuxi. Other sea dolphins incorporate Risso's, striped, spinner, spotted, normal, dim, hourglass, unpleasant toothed, white-angled.

Bottlenose dolphins inhabit warm and mild oceans around the world, being found wherever aside from the Arctic and Antarctic Circle areas.

The short-hooked basic dolphin (Delphinus delphis) is a type of regular dolphin. It has a bigger reach than the since a long time ago bent basic dolphin (D. capensis), found all through warm-mild and tropical seas, including the Indian Ocean albeit in more modest numbers than different spots they are found.

Risso's dolphins here and there called dark dolphins, are found in the calm and equatorial areas of all the world's oceans. It is usually known as the Monk dolphin among Taiwanese anglers

The spinner dolphin (Stenella longirostris) is a little dolphin found in seaward tropical waters all throughout the planet. It is renowned for its gymnastic showcases wherein it turns along with its longitudinal pivot as it jumps through the air.

Pacific white-sided dolphins are pelagic, which means they live in the vast sea and nearshore waters, however are probably not going to be discovered near shore. They live in the mild waters of the North Pacific Ocean. In the United States, you can easily spot one of them in places such as  California, Oregon, Washington, and Alaska.

Here at Kidadl, we have carefully created lots of interesting family-friendly animal facts for everyone to discover! Learn more about some other mammals including the Irrawaddy dolphin, or spinner dolphin.

You can even occupy yourself at home by drawing one on our Striped dolphin coloring pages.