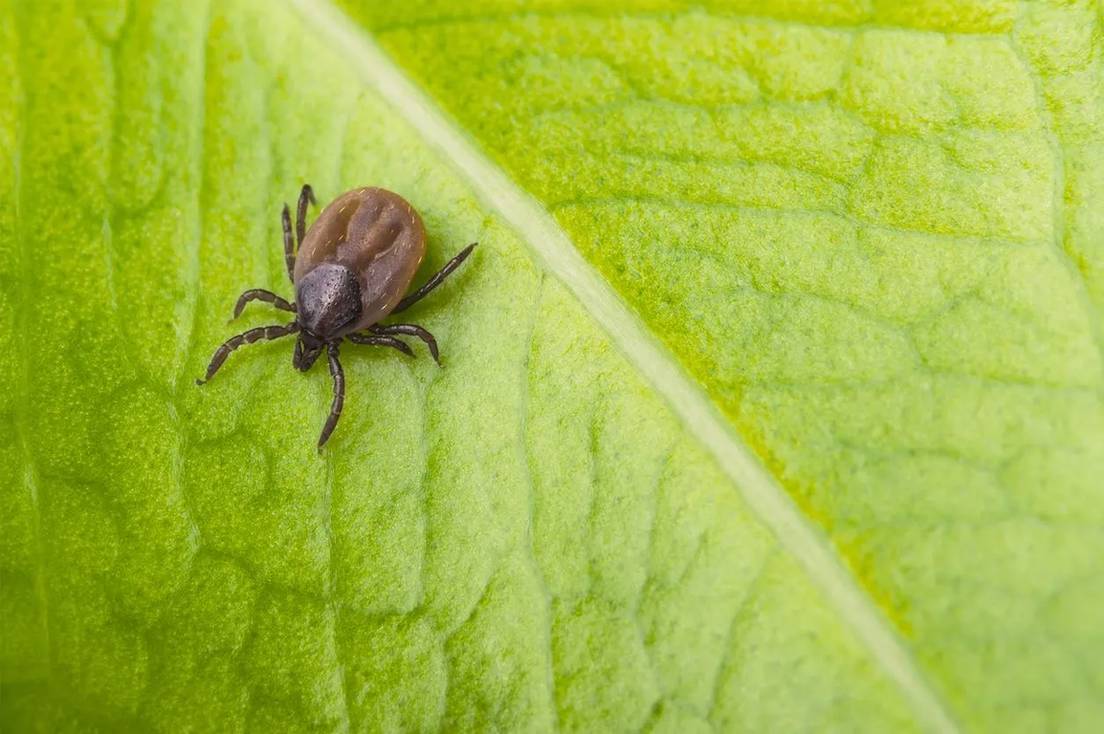 Ticks are small parasitic animals that are closely related to spiders and termites. They are commonly found in various parts of the United States. Ticks attach to the body of a host and suck its blood as their meals. They leave tick bites on the attachment sites after 10 days. A tick bite can be harmful to organisms as it spreads diseases. Ticks usually bite in the humid area on the body of a host. They are known to have their presence in furs. Many animals in the wild are often infested by ticks, which cause rashes and diseases. However, they may serve some good in the ecology as they serve as food for birds and amphibians.

Ticks cause various serious diseases such as Lyme disease and Rocky Mountain Spotted Fever. There are four stages in the life cycle of ticks: eggs, larvae, nymphs, and adults. Except for eggs, all others feed on the blood of various animals. Therefore they are not only dangerous for humans but also pets. All the later three stages possess a different number of legs. The adults have an oval-shaped body with a hard shield on the upper side of the body. They are fast jumpers.

If you like to know more about ticks, keep reading, and you can also check out these black-legged tick facts and brown dog tick facts.

What type of animal is a tick?

The tick is a parasite responsible for the transfer of various microbes to higher organisms.

What class of animal does a tick belong to?

The tick is an arachnid that belongs to the Arachnida class of animal, of the phylum Arthropoda.

How many ticks are there in the world?

The population size of ticks has not been estimated yet.

Where does a tick live?

The tick can be found all over the world. It is common in the United States, especially the backlogged deer tick. They mostly flourish in those nations which have warm, humid climates. It is because these arachnids need a definite amount of moisture in the atmosphere to undergo metamorphosis. In an environment with low temperatures, there is inhibition of the development of eggs and larvae of tick species. These diminutive animals are the host of other taxa, such as marsupials, reptiles, mammals, birds, and amphibians. Every year, these small ticks cause significant loss of livestock through the transmission of various pathogens, causing diseases like anemia. They can damage the wool and hides of pet animals. In Africa, the Caribbean, and other nations, the tropical bont tick is a common parasite of livestock and wild animals that cause heartwater diseases. The spinose ear tick thrives all around the world. The juvenile spinose feeds inside the cattle's ears. Check out the wood tick too!

What is a tick's habitat?

The tick is closely related to spiders that prefer a place that is a link between a forest and a lawn. Hence, one way to handle the tick is by removing leaf litter, weeds, ad brushes on the border of the forests. This tiny animal-like dark, wet leaf little with an overcover of trees or shrubs. In the spring, it installs its eggs into such areas so that larvae after hatching can crawl into low-lying vegetation. The tick migration zone is the three-meter boundary closest to the border of the lawn, where nearly 80% of tick nymphs are found.

Who do ticks live with?

Ticks are external parasites that show parasitism which is a symbiotic relationship between species. In this, one organism lives on or in the other organism, known as a host which can be an amphibian, mammal, bird, or reptile. The ticks usually bite singly and not in a group. It is easy identification of a tick bite.

How long does a tick live?

The minimum lifespan of a tick is three months and the maximum is three years.

The life cycle of ticks consists of four phases: tick eggs, larvae, nymphs, and adults. Except for eggs, all phases rely on blood meals for survival. The male tick general die after mating. Therefore, female adults (hard ticks) are responsible for biting on organisms. They go near to a host with their legs and grab onto its body. Larvae have a specific preference of hosts, whereas the nymph can attach to various animals, including humans to get a blood meal. Tick larvae are diminutive with six legs, whereas nymphs and adults have eight legs. There are three types of the ticks life cycle: one-host cycle, two-host cycle, and three-host cycle. The amount of time every stage spends in one, two, or three hosts is what makes these cycles different from each other.

The conservation status of ticks is Least Concern. Ticks are widely spread in their range. They may not be given priority even if they went extinct, since they are disruptive in nature.

Ticks are small bugs that suck the blood of various animals. Their size can be the same as the size of a tiny pin's head and as big as an eraser. As small ticks are related to spiders they also have eight legs. The color of the little ticks depends on the type of species. They can be reddish-brown to black. When they suck on blood, their size grows. The largest tick can attain the size of a common marble. After ticks feed on blood for several days, these tiny animals become overgorged and turn into greenish-blue creatures. The bodies of ticks are ovoid or pear-shaped and the cephalothorax and abdomen are entirely fused. Ticks have a hard shield or covering on the upper sides, which is called a scutum. The ticks of the family Ixodidae (hard ticks) have a beak-like structure at the forward-facing side, whereas the soft ticks possess their mouthparts on the inner side of their bodies. Ticks are not cute at all. In fact, they are potentially harmful and must be avoided at all costs.

How big is a tick?

How fast can a tick run?

The speed of a tick is unclear. However, it does not jump, fly, or crawl very fast.

How much does a tick weigh?

The weight of this small animal is unknown.

There are no specific names for male and female ticks.

What would you call a baby tick?

The baby tick is called a larva or nymph.

Yes, ticks are dangerous animals. They are responsible for tick bites and spreading severe diseases, such as Rocky Mountain spotted fever (RMSF), Lyme diseases, Colorado tick fever, Tularemia, and ehrlichiosis. These tick-borne diseases cause various symptoms such s a red spot or rash, neck stiffness, a headache, joint pain, fever, chills, weakness, and nausea. It takes one week to several days before symptoms show up. For instance, in countries where Lyme disease is common, it is advised to take treatment for Lyme disease after a tick bite and before the occurrence of symptoms as it is a severe disease. It is also advisable to see a doctor if you experience unusual symptoms after a tick bite. He will examine the bite site and determine whether symptoms are due to the result of tick-borne disease or not. If yes, he will give you medical care right away.

No, ticks are not good to keep as pets. They to only transmit disease to humans but also other pets.

Ticks are pets lovers, especially dogs. It is because they are easy targets for them.

Ticks may not die immediately after they bite you, but they stay attached to your skin to suck blood.

Fine-tipped tweezers can help you remove ticks if you ever get bitten by them.

They are often referred to as mini vampires.

There are nearly 900 species of ticks throughout the world. 700 out of 900 are soft tick species, while 200 species are hard ticks. Soft ticks belong to the family Iocididae and hard ticks belong to the family Argasidae. The most common types of ticks that transmit diseases include American dog tick, Black-legged deer tick, brown dog tick, groundhog tick, lone star tick, Pacific Coast tick, and Rocky Mountain wood tick. The black-legged deer tick earned its name because of its unique legs. It is sometimes called deer tick because it prefers white-tailed deer as a host. Found throughout the south-east and the northcentral United States, the deer ticks are known to transmit diseases, such as Lyme disease and human babesiosis.

Ticks prefer a warm and wet region of the body. Once they find it, bite it, stick to it and suck blood for up to 10 days and then fall off. When a tick bites you, you will know it. Most tick bites are not harmful and show no symptoms. However, if a person is allergic to tick bites, they can experience various symptoms, such as pain, swelling, a rash, blisters, and a burning sensation. In severe cases, a person may have difficulty in breathing. The identification of tick bites is easy. You may see a tick attached to the skin of your body. It should be noted that only specific types of ticks transmit disease. To remove a tick from the skin, you can use a tick removal tool or tweezers. Take the tool in the hand, grasp the tick very close to the skin, and pull it away from the skin. Examine the bite region if there is any part of the animal left on the skin. Clean the bite area with antiseptic soap and clean water. Disease control and prevention include various steps that prevent tick bites and also avoid tick-borne diseases. You can prevent tick bites by wearing a full sleeve shirt, using repellents, and washing clothes with 0.5 percent permethrin.

Here at Kidadl, we have carefully created lots of interesting family-friendly animal facts for everyone to discover! For more relatable content, check out these oriental cockroach facts and ambush bug facts facts pages.

You can even occupy yourself at home by coloring in one of our free printable Tick coloring pages.