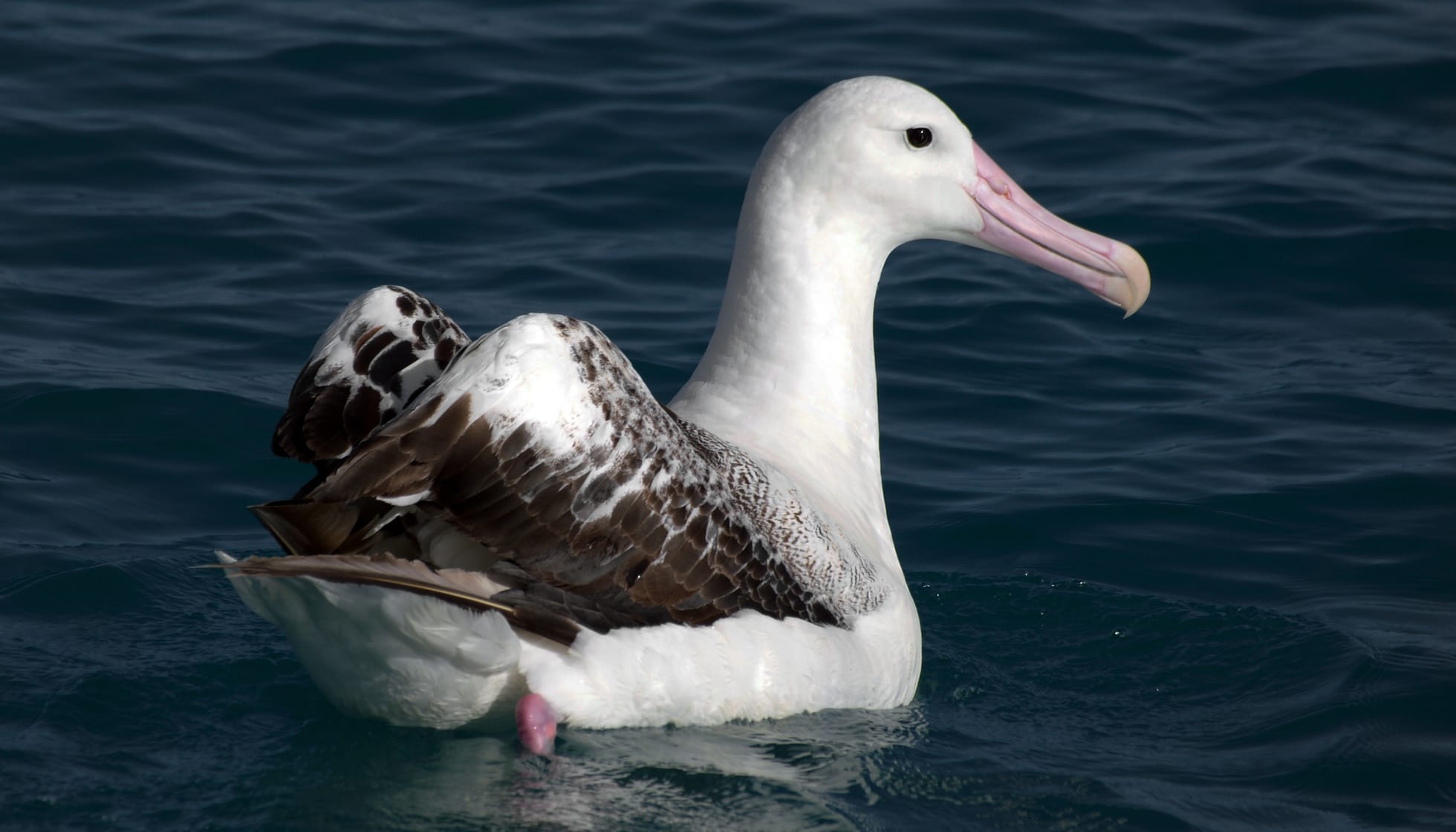 The wandering albatross is among the largest bird of the Diomedeidae family and it has the largest wingspan of any living bird today. It belongs to the class of Aves and its scientific name is Diomedea exulans. These birds spend most of their lives in flight and can be found in the Southern Ocean from 28° to 60° in the Antarctic Islands and sub-Antarctic region.

They typically weigh between 14.0 - 26.3 lb and measure 107 - 135 cm long, with males being heavier than females. Their bodies become whiter as they age and a special gland in their nasal passage allows them to intake saltwater to meet their need for water while secreting the saline solution.

They have been classified as a Vulnerable species by the International Union for Conservation of Nature and their numbers continue to decline due to several human activities.

Read on to know more about these birds. For more interesting animal facts, check out our articles on the common buzzard and adélie penguin.

What type of animal is a wandering albatross?

What class of animal does a wandering albatross belong to?

How many wandering albatrosses are there in the world?

Where does a wandering albatross live?

What is a wandering albatross' habitat?

Birds of this species remain in flight for most of their lives. Wandering albatrosses usually only land on the Southern island to feed and breed. These birds have a circumpolar range from 28° to 60° in the Southern Ocean of the Antarctic Islands and sub-Antarctic region. They rarely head out of the sub-Antarctic region in the south. 75% of the breeding population of wandering albatrosses can be found in Prince Edwards Islands, South Georgia, and Crozet and Kerguelen Islands. Non-breeding birds of this species usually remain between north of 50° S and the sub-tropical regions.

Who do wandering albatrosses live with?

Birds of this species are usually solitary. They cover wide distances in flight on their own, but they can be seen in colonies during breeding season. The breeding season brings wandering albatrosses together in isolated island groups or colonies in the Southern Ocean.

How long does a wandering albatross live?

The average lifespan of the wandering albatross (Diomedea exulans) is more than 50 years.

Wandering albatrosses reach sexual maturity by about 11 years of age. They have elaborate mating rituals while courting. Breeding usually happens every two years and a pair will mate for life. While courting a female, males perform several mating rituals. Males will spread their wandering albatross wings, wave their heads around, and wrap their bills against that of the female  with a braying sound. The mating season typically commences in early November, with these birds making their nest of grass, mud, and other vegetation on the Sub-Antarctic islands. They usually form loose groups or colonies on the islands only during breeding season.

A female bird of this species will lay one egg in the nest between mid-December and early January. The egg is generally 10 cm (3.9 in) long, white, and has a few spots. Incubation of the egg is done by both parents and usually takes 11 weeks. Once the chick is born, parent albatrosses take turns to hunt and care for the chick. The parent bird that hunts will return to the nest and regurgitate their stomach oil for the chick to feed on. Both parents will then venture out to sea to hunt food for the chick, returning to the nest at varying intervals to feed the chick.

Wandering albatrosses have been given the conservation status of Vulnerable as per the International Union for Conservation of Nature. The mortality rate for adult birds of this species is between 5% and 7.8%. While the occurrence range of wandering albatrosses is 64,700,000 km2 (25,000,000 sq mi), their breeding range stands at 1,900 km2 (730 sq mi). The population of wandering albatrosses has been in decline over the years due to several factors. Long line fishing is one of the biggest threats, with fishing gear catching these birds as by-catch in many instances. These birds can also get entangled in fishing gear. The depletion of fish stocks by humans also threatens their survival.

Wandering albatrosses are also threatened by poaching and hunting activities. They are used as a food source by the Maori of New Zealand and their bones, wings, and bills are turned into several recreational products by humans. Oil and plastic pollution of the sea also has an impact on their numbers.

Because this species of birds have a slow breeding rate, their population is slow to recover.

This sea bird has a white head, body, and neck, with a large pink beak and wedge-shaped tail. Younger albatrosses usually have darker plumage which turns white as the bird ages. The wings of males are usually whiter than that of females. The birds typically carry 6.35-11.91 kg (14.0-26.3 lb) of weight and measure 107-135 cm long. Male albatrosses are typically 20% heavier than females.

This sea bird has the largest wingspan of any living bird, with wings measuring 2.51 - 3.5 m (8 ft 3 in - 11 ft 6 in). This massive wingspan helps albatrosses in flight over vast distances using dynamic soaring and slope soaring. The wing also has a shoulder lock feature in which, a sheet of tendon keeps the wing locked when it is fully extended. This prevents them from having to flap to remain airborne.

A special gland located above the nasal passage of albatrosses secretes a high saline solution. This adaptation allows them to get their intake of water from the saltwater of the sea. The tubules of this gland carry out the desalination process and excrete the salt liquid via a duct present at the tip of their beak.

Wandering albatrosses are cute birds, especially when they are chicks.

How big is a wandering albatross?

How high can a wandering albatross fly?

How much does a wandering albatross weigh?

There is no separate term used for male and female albatrosses. They're just called the wandering albatross.

What would you call a baby wandering albatross?

A wandering albatross baby is called a chick.

The wandering albatross diet consists of small fish, crustaceans, cephalopods, and squid. They meet the needs of their diet through shallow dives or catching fish at night from the sea surface. They also follow ships and boats in the hope to feed on any refuse catch.

No, wandering albatrosses are wild birds and would not be able to survive as pets in homes. They have specific requirements from their habitat that simply cannot be replicated if they were to be raised as pets.

Wandering albatross have a stomach volume of 3-4 liters and can digest up to 3.2 kg of prey, more than 30% their body mass. Their acidic stomach makes this possible by speeding up the process of chemically breaking down the food they eat. This aids their digestion.

Do wandering albatrosses have any natural predators?

There are almost no wandering albatross predators in the world because these are among the biggest species of birds and they spend most of their life in flight.

What is the average wingspan of a wandering albatross?

Here at Kidadl, we have carefully created lots of interesting family-friendly animal facts for everyone to discover! Learn more about some other birds including grouse, or corncrake.

You can even occupy yourself at home by drawing one on our wandering albatross coloring pages.