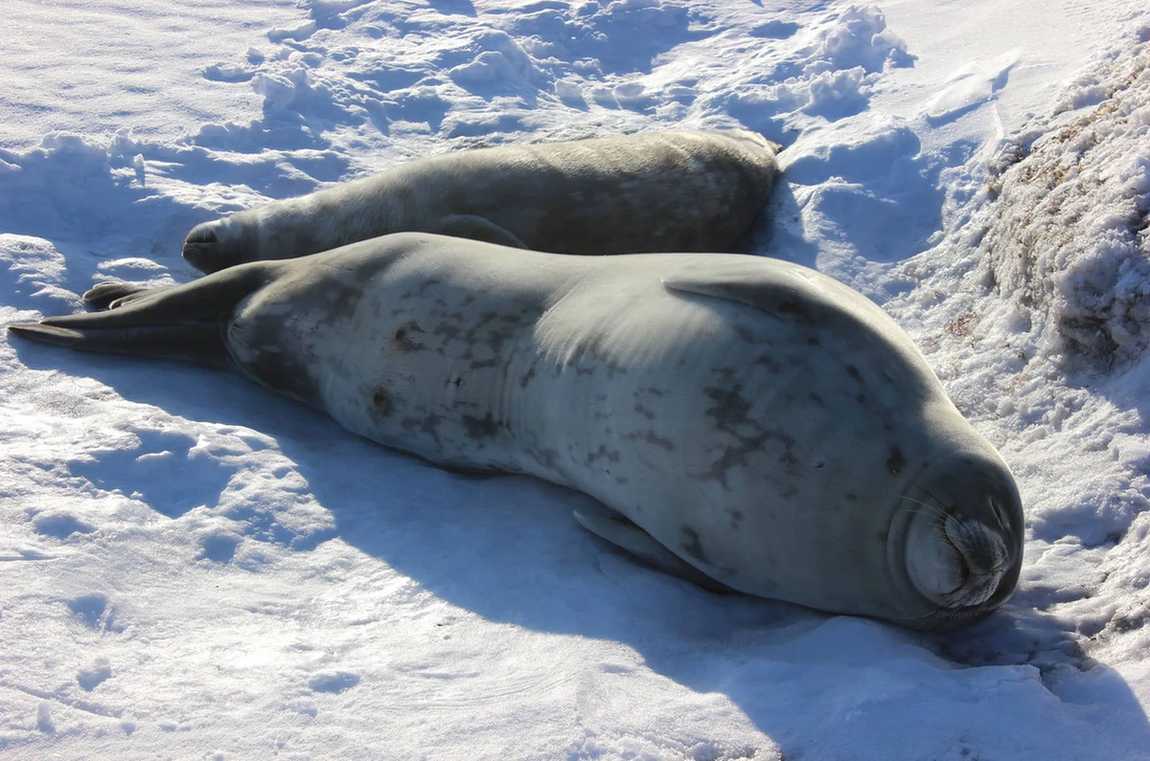 Weddell seals (Leptonychotes weddellii) are deep-diving and non-migratory true seals without ears; they are found near the South Pole on the coast of Antarctica. Weddell seals are counted amongst the largest species of seals in the world, it is easy to determine their sex as adult females are slightly bulkier than adult males. A baby pup has a gray fur coat, and as it grows it becomes dark gray. They can remain submerged in water near fast ice with their head above the cracks and holes on the surface.

Weddell seals were discovered in the 1820s by James Weddell, a British captain during the expedition of the Southern Ocean. Weddell seals have been well-documented for years as they occupy fast ice regions close to the Antarctic continent.

What type of animal is a Weddell seal?

The Weddell seals (Leptonychotes weddellii) are large and true seals with no visible ear flaps, belonging to the family of Phocidae. They live above the horizon at all times in the surrounding Antarctic region. These seals spend most of their time during the winter season inside the ice with their head above the cracks, and in breathing holes, nibbling their teeth on the ice.

What class of animal does a Weddell seal belong to?

The Weddell seal belongs to the Mammalia class of animals. Having mammary glands to feed their young ones, the presence of the three ear bones, fur or hair, and the neocortex (region of the brain) are what qualifies the Weddell seals as mammals.

How many Weddell seals are there in the world?

Currently, the total population of Weddell seals is over 800,000 in the world, and their population is rapidly increasing.

Where does a Weddell seal live?

Weddell seals are found in the fast ice region of Antarctica and due to recent population distribution, they are also found alongside the Antarctic bases.

What is a Weddell seal's habitat?

Weddell seals are non-migrating species of seals, moving from one breathing hole to another, and when on land they are found lying on their sides. Weddell seals are primarily found in the Antarctic waters near glaciers, but due to climate change, the population of the Weddell seal is becoming distributed further afield as the ice melts.

Who do Weddell seals live with?

Weddell seals are seen gathering in groups near the breathing holes made in the sea ice and stay together in the Antarctic with their nose just above the ice to avoid the howling winds.

How long does a Weddell seal live?

Weddell seals can live up to 30 years on average in the wild where they have a favorable habitat.

Weddell seals reach their sexual maturity at the age of three years old, and their breeding season occurs in September through November, depending on the latitude of their domain. These animals become extremely loud during the mating season, which occurs in the water with their head above the water.

The Weddell seal is found giving birth to twins, mother seals give birth to the seal pups within five months. The newly born seal pup is born half the length of their mother, around 59 in (150 cm), weighing up to 55.1 lb (25 kg). After giving birth, the adult female Weddell seal does not feed herself and grows weaker, which makes their ribs visible.

One or two weeks after the pups are born, they start to swim and dive inside the pack ice water for foraging fish and other small creatures.

As per the IUCN list, the Weddel seals are listed as a species of Least Concern. Weddell seals are also protected by the Antarctic Treaty of the Convention for the Conservation of Seals in the Antarctic Region.

Weddell seals are covered with a thin fur coat on their entire body, except for the area near their flippers. Their coat color varies from light gray to a duller gray as they grow, and these animals molt at the beginning of summer. Their coats turn brown just before the annual molt.

The Weddell seal has a membrane just above their eyes that protects them from salt in the ocean and the blowing snow.

Weddell seals are very large mammals, but a newly born seal pup is the cutest creature, flopping with their oversized flippers on the ice after birth.

How big is a Weddell seal?

Weddell seals are large animals, both adult males and adult females are about the same length, growing up to 98.4–137.7 in (250–350 cm), with the females being slightly bulkier than the males.

How fast can a Weddell seal swim?

The Weddell seal can swim at a speed of around 6.2 mph (10 kph). This speed allows them to dive deeper in the pack ice water while foraging for food and escaping from predators.

How much does a Weddell seal weigh?

Weddell seals are one of the largest species amongst the other seal species, weighing 880–1,320 lb (400–600 kg). Females are slightly bulkier than males, and their heads are smaller relative to their body size.

What would you call a baby Weddell seal?

A baby Weddell seal is called a pup, they are born with soft and fine dark gray hair which they molt after three or four weeks and become darker like the adults. Weddell seal pups are born around half the length of their mother weighing up to 55-66 lb (25-30 kg), and their primary diet is fish.

Their feeding habit depends on the location and time, these species are carnivorous and their diet consists of squid, fish, krill, penguins, crustaceans, prawns, cephalopods, and even other seals. Weddell seals are excellent divers with their magnificent underwater vision helping them in hunting their prey.

Weddell seals are friendly and docile animals, they are not considered to be aggressive when compared to the leopard seals.

No, you can not keep a Weddell seal as a pet. Their large size and unique habitat requirement are major concerns for them.

Weddell seals can easily stay submerged in water for more than 70 minutes at a time, diving up to 600 meters deep while foraging for food and searching for new cracks and breathing holes in the ice. Their ability to dive deep and stay in such cold water is because of the huge number of red blood cells and blood volume compared to other mammals, allowing them to carry more oxygen when they are underwater.

Weddell seals have magnificent underwater vision, giving them a clear view inside the pack ice water when hunting for fish.

During winters Weddell seals find their prey inside the water with the help of their extremely motion-sensitive vibrissae.

Leopard seals are the biggest seal found in the Antarctic region and these species give birth to pups weighing around 66 lb (29.9 kg).

What makes a Weddell seal a true seal?

Weddell seal is a true seal. True seals are those species of seals with no external ear flaps. They are also known as crawling seals to differentiate them from other mammals, such as sea lions and fur seals from the family of Otariidae

Weddell seals are seen attacking four different penguin species, the chinstrap penguins, the gentoo penguins, the Adelie penguins, and the Emperor penguins, and penguins make up only a fraction of their diets. It is a learned behavior as these seals are known for hunting seabirds as well.

Here at Kidadl, we have carefully created lots of interesting family-friendly animal facts for everyone to discover! Learn more about some other mammals including lynx facts and lion facts.

You can even occupy yourself at home by coloring in one of our free printable weddell seal coloring pages.