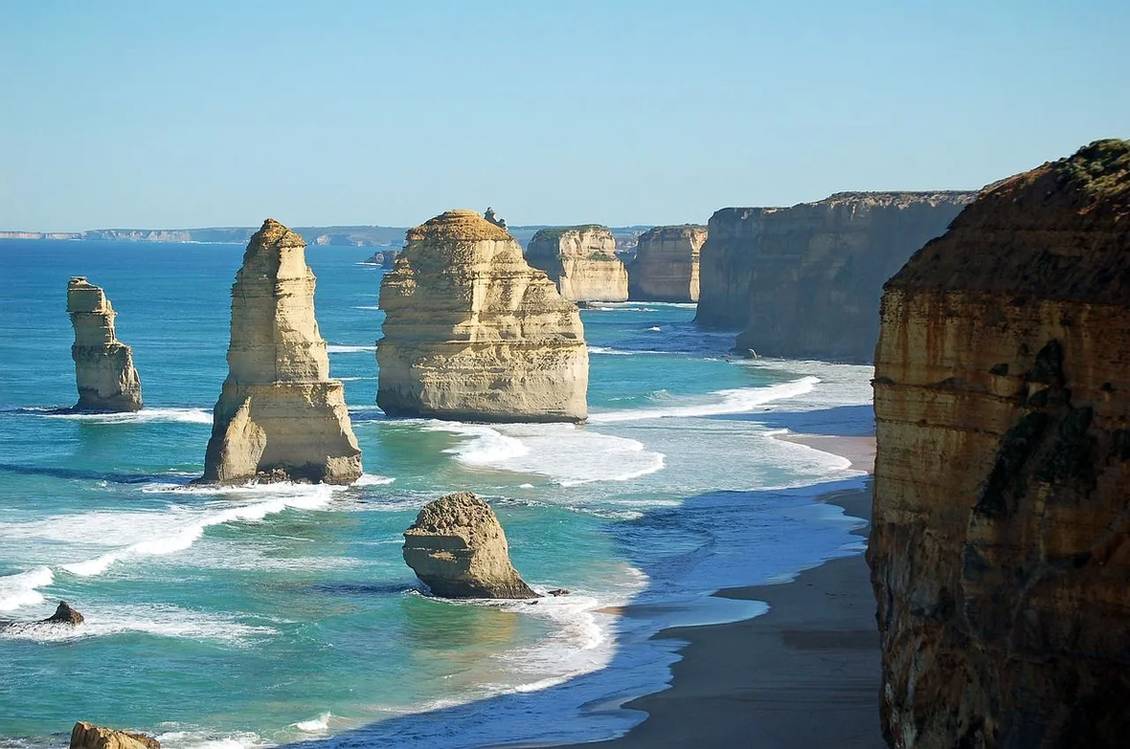 The 12 apostles have been attracting tourists for years, but did you know there aren't 12 of them at all?

The limestone stacks near the Great Ocean Road in Victoria, Australia, were actually called the Sow and Piglets before they started to be referred to as the 12 apostles. In the original name, the Muttonbird Island was referred to as the Sow, and the smaller rock stacks were deemed the Piglets.

The new name, however, is a Biblical reference. Even though the name talks about the 12 apostles from the Bible, each of the stacks wasn't named individually after them. There are many fascinating facts about these historical rock formations that have been amusing people for many years. The ocean has its own way of giving birth to such wonders. It is estimated that these formations became what they are today after years of erosion. Historians and archeologists believe that they were originally an undifferentiated mass of soft limestone that formed arcs due to harsh weather conditions and constant battering from waves. When the arcs fell, the apostles came into view. The twelve apostles site is especially beautiful to behold at sunset and sunrise since the limestone rock formations take on a stunning orange-yellow glow. Located in the Port Campbell National Park, this site should definitely be a part of the bucket list of places that you should visit. A day-long trip will give you a sight to remember for the rest of your life! Keep reading to learn more about the 12 apostles.

If you enjoy reading this article, why not also check out 1939 Australia fire facts and Australian rainforest facts here at Kidadl!

How were the 12 apostles formed?

Nature has its own ways of creating the most beautiful tourist spots and sights in the world. The 12 apostles are limestone stacks that were formed near the Great Ocean Road in Australia years ago.

These stacks, near Post Campbell, are quite famous because of how beautiful they look from viewing platforms. Many tourists and locals make their way to the Port Campbell National Park to have a look at these majestic structures, which serve as testaments to just how beautifully nature works. These rock stacks were formed after years of erosion and weathering. Years ago, rock formations were formed where the 12 apostles exist now. The apostle site was faced with years of erosion and weathering in order to form arcs. With further erosion, the arcs fell, and the rock formation was reduced to a few beautiful limestone stacks.

Since the apostles are still faced with constant weathering and erosion, they are reducing in size and majesty. However, their grandeur and beauty haven't reduced at all. In fact, the number of apostles that are visible along the shore along Great Ocean Road has also reduced over the years. The beating waves have often worked their magic and taken down a rock stack. This happened during the day when people were at the Port Campbell National Park in order to have a look at the nine rock stacks that stood along the shore. As they watched, the ocean worked its magic and took down one of the stacks. Thankfully, no one was injured. Over the years, there have been some incidents where these stacks have collapsed a little bit. On one occasion, some people had to be rescued.

How many of the 12 apostles are still standing today?

In the present day, there are only eight apostles. The apostles are spread across the ocean floor in such a way that a single viewing point cannot give you the sight of all the eight apostles. This is because there is no set pattern in which the soft limestone rock formations were eroded millions of years ago.

There were initially nine apostles, but with the collapse of the ninth apostle in 2005, the world is now only left with eight stacks. It is quite interesting to note that there were never 12 apostles. This is probably why these rock stacks were not known as the 12 apostles initially. This only happened with the increase in the number of tourists that started visiting the Great Ocean Road to have a look at them. The name that was popular back then, the Sow and Piglets, was too local for foreigners and other tourists to understand. Hence, with the rise of tourism and tourist culture, the name was eventually shifted from the Sow and Piglets to the 12 apostles. It is also interesting to note how the nine apostles were not named after the 12 apostles from the Bible. That is to say, each of the limestone stacks is not named after an apostle from the Bible.

Why are the 12 apostles falling down?

The Southern ocean, like other water bodies of the world, has an eroding effect on marine life and the shoreline. The Great Ocean Road and the Port Campbell National Park are no exception. It must be remembered that this is also the reason why these stacks were formed in the first place.

Understandably, the apostles are still undergoing constant erosion, and hence, in 2005, one of them fell down. It is also highly probable that more of the rock stacks at Port Campbell National Park will soon fall down. However, new limestone stacks are constantly being formed through sedimentation on the ocean floor.

How old are the 12 apostles?

While there is no definitive data concerning the age of the 12 apostles, it is assumed that these stacks are around 15-20 million years old.

This assumption is based on the fact that the apostles are made up of limestone, which is a sedimentary rock. Sedimentary rocks are those that are formed by the settling of sediments on the bottom of the ocean floor. It would have understandably taken millions of years for the settling of such high levels of sediment and also for the erosion that would have reduced them down to nine tall, individual stacks. The apostles' site at Port Campbell is a huge part of the natural history of planet Earth and is a constant reminder of how long ago the Earth was born! Additionally, new stacks are constantly being born, which means that our future generations may have more than just 12 apostles to view!

The 12 apostles were first viewed by an English man by the name of George Bass in January 1798, and he was the one that named them the Sow and Piglets.

Additionally, the magnificent structures are in the water, so you can't physically reach them. However, there are numerous viewing platforms all along the coast with beautiful views. Reportedly, the coastline is nearly inaccessible, so you cannot walk on the 12 apostles beach.

Here at Kidadl, we have carefully created lots of interesting family-friendly facts for everyone to enjoy! If you liked our suggestions for '12 apostles facts about the million years old limestone rocks', then why not take a look at 'Australia culture facts', or 'Australian painted lady'?