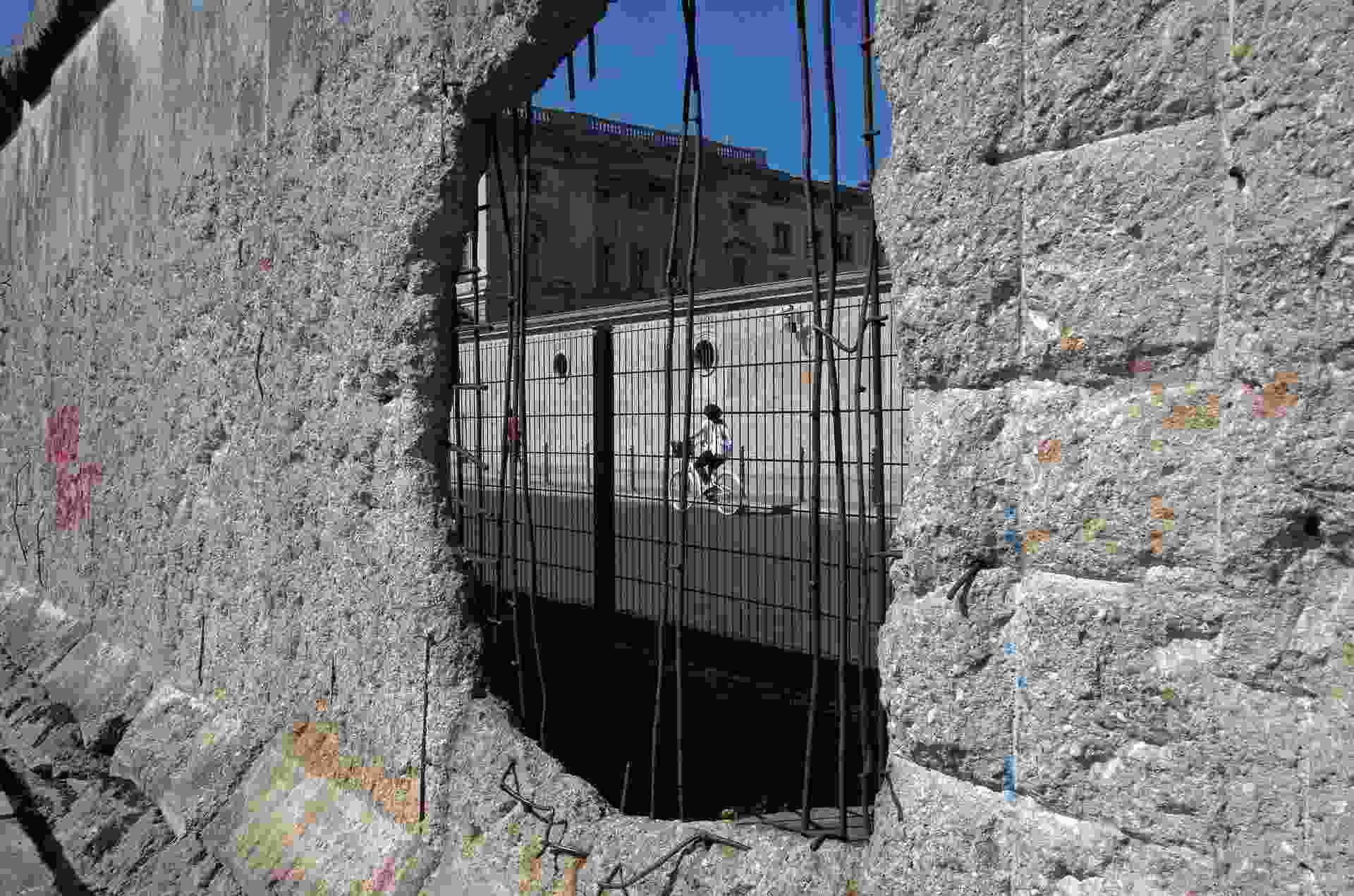 The Berlin Wall was a barrier that divided two halves of the German nation, West Germany and East Germany.

The Berlin Wall was one of the most tangible aspects of the era of the Cold War. The division of West Germany and East Germany was that of oppression to both sides.

The Berlin Wall stands as the most iconic symbol of the Cold War; however, it was only put in place 15 years after the events of the Cold War had begun. There were two million people from East Germany that went to West Germany between 1949-1961. The Berlin Wall’s original purpose was to put an end to the crossing of East German people. However, after there was a brain drain of citizens on the Eastern Side, the Soviet Union leaders decided otherwise. You might be surprised to know but the Berlin Wall was actually made of two walls! Continue reading to find out more Berlin Wall facts to know more about the concrete blocks and walls constructed to divide Germany. Afterward, also check facts about Bolton and Black Wall Street facts.

For 30 years, the wall that divided the city of Berlin not only served as the difference of ideology between the West and Soviets, it was also an ugly mark of the Cold War.

The Berlin Crisis was the event that led to the wall that divided East and West Berlin. Nikita Khrushchev, who was the leader of the Soviet Union gave a speech on November 10, 1958, in which the Soviet leader demanded that the Western powers of the United States, the United Kingdom, and France withdraw their allied military personnel from West Berlin within six months. This ultimatum began a three-year crisis over Berlin's future, culminating in 1961 with the construction of the wall that divided East and West Berlin; it ultimately led to the falling of Berlin. Despite promises made after the Second World War to reunite the Soviet zone and the Allied zone of Berlin, the division of Germany and its capital city of Berlin among the four World War II winners were locked in time when the Cold War began.

Although West Berlin remained under Western administration that was, it was positioned deep within East German territory, making its defense against Soviet Union takeover a continuing issue for the western powers. The Soviet Union had many other Eastern European countries under its control and could launch attacks from their lands too. The Soviet Union provoked a crisis in the city of Berlin in 1948 when it closed off land access between West Germany and West Berlin to stop border crossings, prompting a year-long airlift of supplies to the trapped people. The Soviet Sector finally decided to open the border crossing. This came to be known as the Berlin Airlift. A similar predicament, however, led to the fall of Berlin in 1958, East Berlin was already too crowded and rich to be fed by air. The United States and other allied Western countries saw West Berlin's economic growth and political freedom as a sign of the capitalist system's triumph, and it was firmly devoted to the protection of West Berlin. The Soviets made a move to shut off land access once more had the potential to escalate the confrontation between the Soviet Union and Western Powers.

The Soviet Union and the East German government were increasingly seeing the Western Part of Berlin as a burden. The city's division exposed the stark contrast between the communist and capitalist regimes of the East Berlin Government and the West Berlin Government, and the freedom of movement between the sectors resulted in a large migration from Easter Berliners to West Berlin, they hoped that their lives would be much better under Western powers as compared to the oppressive rule of the Soviet Union in East Berlin.

In November 1958, the Soviet Leader Nikita Khrushchev stated in a speech that it was time for the Western Fascists to withdraw from West Berlin in order to stem the movement of people from east to west and to control West Germany's rising military potential which could have been an immense threat for the Soviet Union.

The people of East Berlin awoke on August 13, 1961, to find that a barbed-wire fence had been erected overnight on the instructions of the East German Government. The wall divided the east and west parts of Berlin and also limited mobility between the two sides. The wall served as a division of Germany itself, it reminded people of the ideological differences between East and West Germany. The barbed wire fence was quickly reinforced with masonry walls with East German guards on security towers and watchtowers. The Berlin Wall would prevent the west from exerting further influence on Eastern Berlin and would also halt the flow of refugees out of the Soviet sector. All of this led to the Berlin Wall becoming Europe's most famous symbol of the Cold War. The wall and its barbed wire fence which split families and curtailed freedom of movement between east and west Germany were swiftly denounced by the US at the time. There were many failed escape attempts to cross the Berlin Wall, those who were caught by East German Border Guards were heavily punished. Those who tried to cross the Berlin Wall were imprisoned for five years and at times were shot and killed on the spot.

Even if some of the guards tried to escape from East Berlin, these guards would try to flee on their own, using their uniform as a cover to enter West Berlin without being questioned. More than 1,200 desperate guards fled to West Berlin in the first two years of the wall's existence to escape their constricted lives and responsibilities.

The separation of East Germany and West Germany was completed on August 13, 1961, wherein temporary blockades were set up to keep the two new countries separate.

Earlier, Walter Ulbricht, who was the leader of East Germany said that there will never be any wall constructed to divide Berlin into two parts but as per the council’s orders, the construction of the Berlin Wall commenced. Slowly, the temporary blockades of barbed wire were replaced by concrete walls and blocks with the construction completed in August 1971. Homes that were located along the borders were transformed into fortresses that strengthened the border by blocking their walls and windows with bricks. The homeowners were able to enter their homes through East Berlin only. Many people were evicted from their homes in border regions. Not only the streets and neighborhoods were divided, but even the public transport system was also divided as per the decision.

The walls which divided Berlin into east and west were changed, fortified, and increased in the years to come, and the border control system was refined by the German Democratic Republic in order to prevent any kind of escape attempt or movement from one side to another. The Berlin Wall was constructed in the center of Berlin and between 1961-1988, more than 90,000 East Germans tried to defect to West Germany by crossing the walls. More than 600 of them were shot at by the border guards on the East Germany side by firing gunshots, out of them, around 130 died. Every East German Border guard present at the watchtowers had the orders to shoot anyone trying to jump to the other side of the divided city.

The Berlin Wall death strip was a sand or gravel-covered stretch of ground between the two walls of the Berlin Wall. It was regularly monitored by guards stationed in watchtowers, who had the authority to kill anybody attempting to flee to another side. Citizens who tried to make an effort to escape could be tracked down due to their footprints being left on the death strip. The death strip was no man’s land, it did not belong to either West Berlin or East Berlin.

Political events in Eastern Europe and public turmoil in Germany pushed the East German authorities of the Soviet Union to relax certain travel restrictions to West Germany in 1989.

East German spokesperson Günter Schabowski declared at a news conference on November 9 that East Germans would be allowed to go into West Germany beginning immediately. People from the West were allowed to enter East Berlin and vice versa. However, Günter Schabowski failed to specify that some regulations would remain in place in the context of crossing the Berlin Wall. The border that had divided East and West Berlin was opened. Western media reported on how crowds of people gathered around checkpoints on both sides of the Berlin Wall. Passport inspections were gradually phased out, and travelers were able to cross the border without any kind of instructions. People of Berlin from both East Berlin and West Berlin gathered together to celebrate this major milestone towards the unification of Germany. The collapse of the Berlin Wall marked the beginning of Germany's reunification, it was an important event for the whole of Europe. The Berlin Wall fell on November 9, 1989. The collapse of the Berlin Wall undermined the already fragile East German administration on political, economic, and social levels. On October 3, 1990, 11 months after the collapse of the Berlin Wall, Germany's reunification process was fully complete.

It was not long after the reunification of Germany that the Soviet Union itself fell down. Gorbachev resigned 13 months later, on December 25, 1991, and the Union of Soviet Socialist Republics was dissolved.

Why was Berlin Wall built?

Once the control of Germany was taken over by the Allies, within two years considerable differences arose between the Soviet Union and the Allies. The reasons behind the disagreements were related to social and political issues that would determine the future of Germany.

Harry Truman, who was the US president at that time, approved a rebuilding strategy for Germany which was known as the Marshall Plan. This plan was designed to provide economic support to West Europe as a part of their revival efforts after World War II. This idea was not acceptable to Joseph Stalin who was the leader of the Soviet Union as the Marshall Plan did not meet the long-term goal of Stalin of unifying the communist powers of Eastern Europe as part of the Eastern Bloc.

The construction of the Berlin Wall was started in the year 1948 due to the Berlin blockade. The Soviet Union thereby created East Germany or the German Democratic Republic. The borders between the two Germanies were shut off in 1961. This division had a considerable impact on the lives of the people of East Germany and West Germany. Both the countries had separate economic and political ideologies and were separated by concrete walls and concrete blocks spanning over 88 mi (140 km). It took almost 30 years for travel to be opened between the two sides.

Here at Kidadl, we have carefully created lots of interesting family-friendly facts for everyone to enjoy! If you liked our suggestions for 13 Berlin Wall facts reflecting history, construction, and fall then why not take a look at are sponges animals? unpacking these peculiar specimens, or creepy crawlies: are spiders nocturnal? do spiders sleep at night?