Do Snails Lay Eggs? Interesting Facts You May Not Know | Kidadl

Do Snails Lay Eggs? Interesting Facts You May Not Know 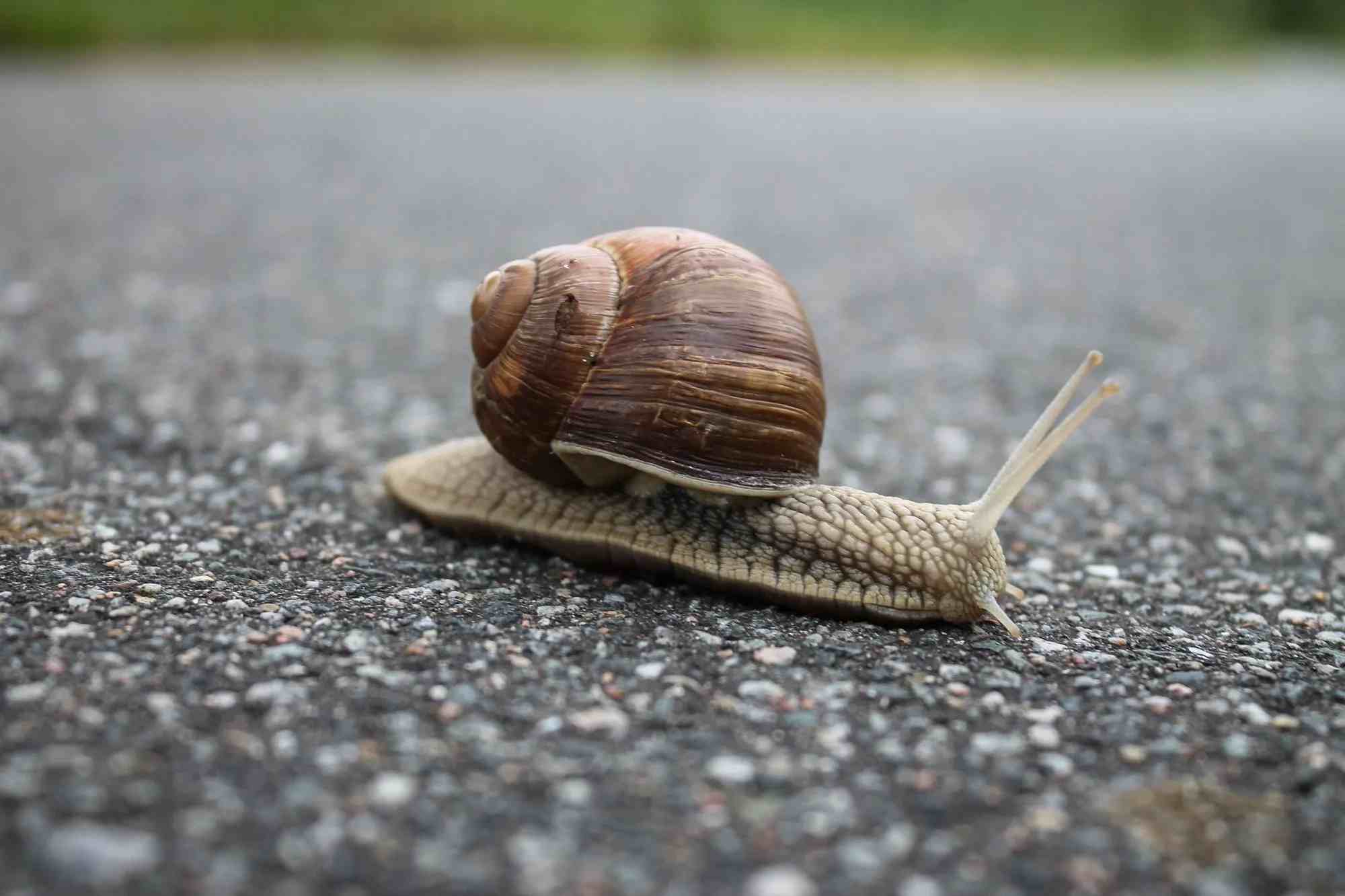 The first thing that comes to our mind when we hear about snails, the slow snail's pace.

Did you know they could even sleep for three years? Another interesting fact is that some species of snails can have even 20,000 teeth!

The strongest natural material on this planet can be found in the teeth of one of the species of marine snails, which can withstand extreme pressure that can turn carbon into diamonds. There are about 60,000 species of snails, which evolved 500 million years ago! Wild snails have a life span of about three to seven years but can live up to 25 years in captivity. Snails are not insects but gastropods, and structurally, they are mollusks. They weigh between 0.06 to 0.1 lb (25 to 45 gm) and 0.28 to 2.8 in (0.7 to 7 cm) in size, the biggest being the Giant African snail which is about 4.72 in (12 cm).

The shell of the snails is the most beautiful part, and the baby snails are born with tender shells. As they grow and get a calcium-rich diet, their shells tend to get hardened. Some snails can grow as big as an adult hand. There are two types of snails: land snails and marine snails, with populations outnumbering the land species. Many consider the freshwater snail, which lives in rivers, lakes, etc., as the third type. Most snails are herbivores, with the land snails eating plants as well as animals and marine snails feed primarily on algae, with some of them also eating fish and invertebrates. The life span of snails ranges from five to seven years, and the baby snails get ready to reproduce by about one year.

Land snails cannot hear but have eyes and smell organs. Their olfactory organs are strong and help them find their food. Snails have a muscular foot to move from one place to another, along with mucus that they secrete to slide on surfaces without friction and safely. They are famous for their incredibly slow pace and move at a 0.5 to 0.7 speed per second (0.012 -0.177 m/s). It is amusing to know that in places like the UK, people organize snail races too! Garden snails can slide over the edge of a razor safely without harming themselves. The mucus of snails is also used to treat wrinkles, scars on the skin, and smoothening effect. They are energetic during nights and dawn and primarily rest during day time. They are active during the wet seasons and inactive, hiding in the soil during winters.

Snails can be pests damaging crops as they eat fruits and leaves. Animals like rats, lizards, snakes, and birds prey on snails, even though they withdraw into their shell to protect themselves. In many places, snails are eaten and are considered a delicacy in Europe, Spain, and France. Sometimes, they may carry poisonous substances that can cause diseases like meningitis, etc., which need to be taken care of before consuming them. During famines, some snails are considered staple food and consumed when no alternate food is available. A few species of snails, like cone snail, can be venomous and can also kill human beings. Its colorful appearance draws divers or other animals closer, and it can suddenly spit harpoon, which can cut through skin, wetsuit, or gloves. There are incidents recorded where a few people lost their lives due to these snail species.

If you enjoyed the read, you could also explore our other animal facts articles on our Kidadl website, like do snails have eyes? And do snails have teeth?

It is amusing to know that there are a few species where a single snail has both male and female reproductive organs simultaneously, called hermaphrodites. These snails still mate with a partner in a courtship process. Many snail species reproduce sexually with the two snails of the opposite sex undergoing the mating process. The reproductive organs are located near the end of the body, on the head, called a genital pore. The eggs are laid out of this pore. The entire process may last from 2-12 hours.

After mating, they lay eggs, which hatch a few weeks later, and hatchlings emerge. The mating season is the warmer months of the year, and during the day, they are most active during sunset time. These hatchlings are tender, small, and defenseless against their predators. Some snails, unable to withstand the stress of giving birth, die and don't survive until the next breeding season. The process of giving birth makes them lose half their body weight. Some snails, like freshwater snails, give birth to the young one directly from their fertilized eggs. The mother keeps the eggs inside a cavity inside, and the baby snails come out crawling when ready.

Many species of snails are suitable for aquarium habitats. For example, the Assassin snails, which are carnivorous, take a long time to reproduce. Moreover, they lay only one egg after mating. The eggs of assassin snails take much longer to hatch, almost a month or two. The eggs of assassin snails are usually scattered near rocks, plants, or driftwood. Nerite snails are another species of aquarium snails, which are underwater living. Nerite snail eggs are laid on any solid surface around the tank. These eggs need natural brackish water to hatch successfully. The nerite snail eggs may require a separate tank with the right saline conditions for the baby nerite snails to emerge and survive in a freshwater tank.

Snails laying their eggs have many factors influencing the process, including temperature, soil composition, and moisture which are all critical for land snails while they lay eggs. The ideal soil temperature is about 700 F (210 C), with soil moisture at 80%. About 20%-40% of the soil containing organic matter is preferred. They are very picky and choose the locations carefully to lay their snail eggs.

Most land snails lay their eggs on land in holes about an inch deep in the soil. The soil keeps the snail eggs cool. Once laid, they begin to hatch in about two to fours weeks, and snail babies emerge. These baby snails attain their complete form with features in about three months. At this time, they desperately need calcium, which is readily available in the shells they emerged out of or the unhatched siblings. This is the reason why snail cannibalism is common and why snails lay their eggs in the ground.

Snail eggs are an excellent feast for some fish in the aquarium. Some fish, catfish, goldfish, loaches, etc., enjoy snail egg meal in the habitat. A decently big tank can house all such fish peacefully, without getting aggressive. Snails play a pivotal role in scavenging the aquarium as natural cleaners. Adult snails effectively clear away fish waste, various residues, algae, etc. Fully grown snail species add to the aesthetic beauty of your aquarium. If the snail population grows prolifically, it may be a good idea to have a few assassin snails in it. True to its name, it kills other snails too.

A few species like Rabbit snails incubate their eggs inside their body in a cavity. After four to six weeks, it can deliver eggs, of which some may be unfertilized. Generally, the fertilized eggs have a black spot, while the unfertilized eggs are clear and white. There could be several occasions when all eggs laid do not hatch and remain unfertilized. If it is an aquarium, such eggs should be cleaned from time to time. It's a good idea to dispose of these eggs humanely, or they can eventually infest the tanky.

Mystery snails are some of the beautiful colored snails and can add charm to your aquarium! They are a subspecies of apple snails. Their relentless algae-eating, along with mannerisms and appearance, make them a delightful addition to the tank. In natural habitats, they are mostly found near the substrate to be close to the organic matter they can feed on. This blends with their temperament of apple and mystery snails being so occupied with searching for algae and other vegetation that they can feed on and be left alone doing this. They are not worked up by snails nearby or fish around.

Can mystery snails lay eggs without a mate?

The other interesting fact about snails is that some species are hermaphrodites. These snails can choose their gender at any instant of time and can switch to the other gender as they wish. Hermaphrodite snails possess male and female reproductive organs. However, the snails mate by choice to reproduce. They can lay eggs as a female snail and then fertilize their eggs as a male. Snails like Ramshorn snails, Pond snails, and Bladder Snails are examples of hermaphrodites. Ramshorn snails reproduce sexually and asexually, where they can clone themselves and fill up the tank, laying eggs of clusters of size one to two dozens simultaneously. Ramshorn snail eggs can begin hatching in one to four weeks, giving birth to baby snails which are Ramshorn snails. The hatching success of Ramshorn snail eggs depends significantly on the temperature.

Zebra snails, named after their white and black stripes pattern, are common freshwater snails, a sub-species of nerite snails. The female zebra snail can lay hundreds of eggs prolifically in the water, which can stick to the surfaces of the driftwood or vegetation. But they do not fertilize unless there is a male snail and need brackish water to hatch most of the time. The best way to deal with this snail egg proliferation is to remove the female snail and add a couple of male zebra snails. The zebra snail eggs are colorful compared to other eggs and generally reside at the bottom or substrate under the crevices of rocks.

Here at Kidadl, we have carefully created lots of interesting family-friendly facts for everyone to enjoy! If you liked our suggestions for do snails lay eggs﻿, then why not take a look at are snails born with shells or how long do snails live.