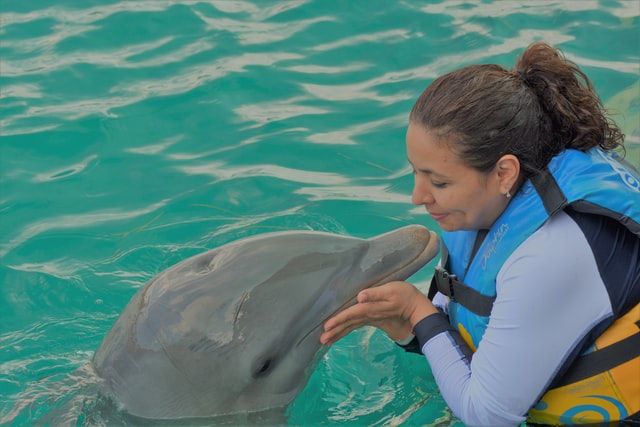 Dolphins are incredible marine mammals with many unique qualities.

Dolphins are incredibly intelligent animals, very social with excellent communication skills, and are playful. These warm-blooded creatures are closely associated with whales.

Dolphins are found in temperate and tropical water habitats as it best suits their body temperatures. These aquatic animals are widespread. As dolphins are mammals, they have to come up to the surface of the water to breathe.

Initially being land mammals, the dolphins have completely transformed into marine mammals in the process of evolution. They have interesting anatomy, unique nature, and behavior patterns.

Dolphins are marine mammals that inhibit large water bodies, mostly the oceans and seas, but with some fresh water speces. Their closest relatives are the whales and porpoises, as they belong to the same order called the Cetaceans. They are carnivores and mostly feed on fish, crustaceans and squid.

According to the fossil records, over 50 million years ago, a four-legged species that lived on land gradually became aquatic and started to spend more time in the water. Eventually, as the shift of habitat suited these species, their bodies started to lose the ability to move on the ground. Their anatomy evolved to accustom them to living in the waters.

Oceanic dolphins, indian river dolphins, new world river dolphins, and brackish dolphins are four different families of the order Cetacea. There are nearly 40 different species of this aquatic creature. Among the 40 different species of dolphins, some are more abundant and wide spread than others, and as a result more well known. First comes the killer whales, which are alternatively known as Orcinus Orca. These are the largest dolphin species. They can be as long as 23 to 32 feet, weighing a massive 6 tons (6000 kg). They are ambush predators and can stalk and trap their prey. They hunt in groups and have their unique way of communicating through audio signals. These species have a life span of 50-80 years. The black dorsal fins that appear like a tower on these killer whales are very distinctive among whales and dolphins. Another very well known species is the common bottlenose dolphin. Bottlenose dolphins are commonly seen in films or television, and are also the most studied dolphin species. They has a distinctive face with large eyes and a nose that is modestly protruding, and a slim grayish body.

Another species is the amazon river dolphin, and as the name suggests, these dolphins live in the amazon river. This dolphin has a lengthy bottlenose that allows it to reach for its prey hiding beneath submerged obstacles and grass, and it also has a bulbous head and a greyish skin tone. These and the South Asian river dolphins found in the Ganges river are often described as the true river dolphins that live in freshwater.

The smallest dolphin species is the Maui dolphin, which is five feet in length and weighs about 145 pounds.

The body anatomy of dolphins is perfect for their survival in water with a hydrodynamic fusiform structure. The morphology of dolphins is aligned to swim fast, even for long periods. The length, color, bodyshape and weight of dolphins differ depending on the species. from each type. The head, tail, and trunk are three vital portions of the dolphin's body.

The skeleton of the dolphin is lighter than similarly sized terrestrial mammals, as the water also supports the dolphins body. The dolphins have shorter necks and flexile rib cages. Their brain is slightly greater than humans' and is massive 50-60 times bigger than the shark's brain. The dolphin has eyes located on either side of the head. Though highly sensitive, the eyes of dolphins cannot identify colors. A small opening behind their eyes leads to the ear canal, and they do not have external ears. The melon, a spherical mass, is located at the dolphin's skull, giving it's head the specific forehead shape. The mouth of a dolphin is also located in the front area, characterized by several teeth, and the elongated jawline is vital in the sensory system. The lungs of the dolphin process the inhaled air through spiracles.

The trunk of the dolphin has a single dorsal fin that provides the dolphin with the stability to swim. The pectoral flippers help on the lower side to direct and control the speed and movement while the dolphin is swimming.

The tail has two parts called flukes that help the dolphin propel through the water while swimming. The tail moves up to down while swimming, unlike the fish whose tail stirs sideways. At the top of the head, the dolphin has a blowhole through which it breathes, and the dolphin has to come to the surface every time it has to breathe, a few breaths two times in an hour, while some dolphin species have to come to the surface frequently. The brain of the dolphin is the second largest when compared with humans in the brain-to-body ratio.

The nature and behavior of these animals account for interesting dolphin facts. Dolphins are smart, social and intelligent animals with inquisitive natures. Wild dolphins are often friendly to humans. The dolphins are well known for their acrobatic skills.

These playful marine mammals are highly social. The dolphins move in pods, and they play and hunt together. A superpod of these dolphins can consist of 1000 individuals all travelling together in the ocean. These mammals are counted as the most intelligent after humans. They can identify themselves in a mirror, and they call each other with unique names in the form of distinctive whistle sounds.

Dolphins have profound eyesight, but they cannot smell. The dolphins sense objects far away with echolocation by absorbing echoes and sound waves. The dolphins can hear sounds ten times higher than humans.

The dolphins breathe through the blowhole and eat through their mouth, and avoid swallowing water into their lungs while eating. The dolphins sleep with half their brains active and eyes open. Dolphins don't chew their food with teeth, and they have two stomachs, one for storing food and the other for digestion.

The females dolphins have a gestation period from nine to 16 months. Before giving birth, the female separates herself from the pod, moves towards the ocean or sea bed, and gives birth. Typically the dolphins give birth to a single calf or twins. The mother and the calf stay together in the nursing period, which may last from 11 months to two years. The time a calf spends near its mother could be six years.

The surfing that these dolphins showcase to boats and ships, when they can be seen leaping through the wave at the boats front, enables them to move fast through water and also play in the wave. Did you know dolphins also ride the wake created by whales!? Surprisingly dolphins name each other and call out in the form of whistles.

Dolphins are friendly to humans, and there are also instances where dolphins have been recorded saving human lives from sharks. Dolphins are also sometimes trained to rescue naval swimmers lost in water bodies. The dolphins of freshwater also play an important role in the overall health of rivers.

Sadly there are threats to the survival of many species of dolphin, and almost all river dolphin species are critically endangered due to river pollution, according to the ICUN Red List. Overdevelopment, habitat destruction, and unsuitable fishing practices like entanglement in fishing equipment cause a threat to the survival of the dolphins. Entanglement in fishing gear is a major problem for many marine animals, and a big issue for dolphins as it often results on them drowning.

April 14 of every year is celebrated as World Dolphin Day.

What is special about dolphins?

Dolphins are unique in acrobatic skills, friendly, playful, and social nature, and their intelligence is thought to be second to humans.

Do dolphins have two brains?

They don't have two brains. They have two stomachs.

How long can a dolphin hold its breath?

Dolphins can stay in water for 2 hours without breathing in some species, while some come onto the surface every few minutes to breathe air.

How much does a dolphin weigh?

What is the difference between a dolphin and a porpoise?

Porpoises are smaller than dolphins and chubby; they have small heads, a small triangle-shaped dorsal fin, and little or no beaks. The porpoise has spade-shaped teeth, whereas the dolphins have conical-shaped teeth.

How fast can a dolphin swim?

Dolphins are, in general, speedy swimmers, and they can swim with a maximum speed of 37 mph (59.5 kph).

Where do bottlenose dolphins live?

The Bottlenose dolphins wander the New England, West Coast, Mid-Atlantic, Southeast, and coastal waters and are also seen among many Pacific islands.

What does a dolphin eat?

Dolphins are carnivores and feed on fish mainly. Bigger species can even prey on turtles and seals.

How long can a dolphin live out of water?

Dolphins can survive out of water for hours if their bodies are wet and maintain a certain temperature.