Facts About China's Imperial Summer Palace For You 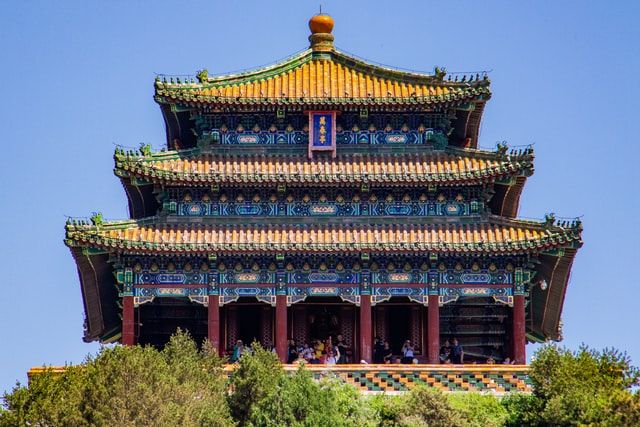 The Old Summer Palace, often known as Yuanmingyuan or Yuanmingyuan Park, was a compound of palaces and gardens in the present-day Haidian District, Beijing, China.

It was formerly called the Imperial Garden and was also known as the Winter Palace. It is located 5 mi (8 km) northwest of Beijing's ancient Imperial City walls.

The Old Summer Palace was famed for its enormous collection of gardens, architectural masterpieces, and countless art and historical artifacts. It was widely regarded as the pinnacle achievement of Chinese imperial garden and palace construction. The Old Summer Palace, which was built in the 18th and early 19th centuries, was the principal imperial palace of Qianlong Emperor of the Qing dynasty and his successors, where they conducted state issues, while the Forbidden City was utilized for ceremonial occasions. In its prime, the place was known as the 'Garden of Gardens.'

The palace was overrun by French and British soldiers on October 6, 1860, during the Second Opium War. The royal possessions were looted and destroyed during the following several days. When news broke that a British-French delegation had been arrested and tortured by the Qing emperors, with 19 members of the delegation killed, the British High Commissioner to China, James Bruce, 8th Earl of Elgin, struck back by ordering the complete destruction of the palace on October 18, which was carried out by troops under his command. The palace was so big that it took 4,000 men three days to demolish it, encompassing more than 860 ac (348 ha). UNESCO reports that many magnificent artworks were plundered and are now housed in 47 museums throughout the globe, including jade, sculptures, silk robes, porcelain, gold artifacts, intricate fabrics, and more.

The Old Summer Palace, like the Forbidden City, has never been open to the general public since it was only utilized by the Qing Empire's royal family. The burning of the Old Summer Palace is still a touchy subject in China. Many Chinese people, as well as other onlookers, saw the demolition of the palace as brutal and wicked.

Near Jade Spring Hill, the palace was erected in a position with plenty of freshwaters. The area was known for its stunning scenery. Country mansions were erected there starting in the 13th century, during the reign of the Yuan dynasty, and the Qinghua Yuan estate was established in the 16th century by Li Wei of the Ming Dynasty. The Western mansions (Xiyang Lou) portion of 18th-century European-style palaces, fountains, and formal parks has the most apparent architectural ruins of the Old Summer Palace. The Jesuit Giuseppe Castiglione conceived and constructed these constructions, which were made part of stone but mostly of a Chinese architecture of wood columns, colored tiles, and brick walls, with Michel Benoist in charge of the fountains and waterworks. After viewing an etching of a European fountain, Qianlong Emperor got fascinated by the architectural idea and hired Castiglione and Benoist to complete it to fulfill his passion for foreign structures and items.

The project included the construction of Western-style palaces, pavilions, aviaries, a labyrinth, fountains, basins, and waterworks, as well as perspective paintings arranged as an outdoor theatrical set. In front of the Haiyan Tang, the biggest palace, a stunning clock fountain was installed. The fountain included 12 Chinese zodiac animals that spouted water, in turn, every two hours, but all spewing water at the same time at noon. These European-style structures, on the other hand, only occupied a tiny section of the Garden of Eternal Spring compared to the entire size of the greens. Chinese-style structures made up more than 95 percent of the place. There were also a few structures in Tibetan and Mongol styles, demonstrating the Qing Empire's variety.

The Old Summer Palace was first built in 1707, during the reign of the Kangxi Emperor. It was meant as a present for the emperor's fourth son, Prince Yong (the future Yongzheng Emperor), who would extend the Imperial Gardens significantly in 1725. The Yongzheng Emperor also designated 28 picturesque sites inside the park and established the gardens' waterworks, which included lakes, bridges, streams, and ponds to complement the undulating hills and lawns. The Yongzheng Emperor also created a variety of 'living tableaux' in which he and his family could watch and engage. 'Crops as Plentiful as Fields' was one such scenario in which court eunuchs pretended to be peasant farmers on an island. Another was the 'Courtyard of Universal Happiness,' a simulated town where the imperial family could mingle with tradesmen, who were all disguised eunuchs.

The second expansion was well underway during the reign of the Qianlong Emperor, and the number of picturesque sites had climbed to 50 (the emperor himself oversaw the construction process). The Forty Scenes of the Yuanmingyuan, an album published by the Qianlong Emperor's court artists in 1744, highlighted the splendors of the palace and gardens. In 1747, the construction of the European-style palaces began.

From the perspective of traditional Chinese imperial foreign relations, the last European presence in the Old Summer Palace was a diplomatic mission representing the views of the Dutch and Dutch East India Company in 1795. The Frenchman Chrétien-Louis-Joseph de Guignes, the Dutch-American Andreas Everardus van Braam Houckgeest, and Isaac Titsingh made up the Titsingh mission. Both released stories of the expedition that were complimentary. Before he could write his version of events, Titsingh died.

During the Second Opium Battle in 1860, a joint Anglo-French invasion army landed in Beijing after marching inland from Tianjin (Tientsin). In mid-September, two ambassadors named Henry Loch and Harry Parkes traveled ahead of the main army under a truce flag to Tongzhou (Tungchow) to negotiate with Prince Yi and Qing dynasty agents, as well as survey-suitable campsites beyond enemy lines. A small guard of British and Indian troops accompanied the group, which included Thomas William Bowlby, a Times correspondent. On September 18, as the discussions came to a close, Allied forces assaulted Qing soldiers in the vicinity, believing they were redeploying for a surprise, and the Qing court realized that the British had imprisoned Tianjin's prefect.

Around this time, the Qing commander Sengge Rinchen kidnapped the members of the delegation when they crossed Qing borders on their way back to the expeditionary troops. The delegates and their entourage were brought to Beijing's Ministry of Justice (or Board of Punishments), where they were held captive and tortured. After two weeks, Parkes and Loch were reunited with 14 other survivors. The torture claimed the lives of 19 British, French, and Indian prisoners.

On October 18, Lord Elgin, the British High Commissioner to China, ordered the burning of the Old Summer Palace in retaliation for the torture of the delegation members. Burning the Old Summer Palace was also a signal to the Qing Dynasty not to employ abduction as a political strategy against Britain. The whole town was set ablaze by 3,500 British forces, and the tremendous inferno lasted three days. When the palace complex was burned, about 300 surviving eunuchs and royal maids, who had hidden from the army in closed apartments, died. Only 13 structures were found undamaged. The majority of them were in rural regions or near the lake. (When the Eight-Nation Alliance stormed Beijing in 1900, the palace was looted and entirely demolished once again.)

The Qing imperial court moved to the Forbidden City when the Old Summer Palace was sacked. In 1873, Empress Dowagers Ci'an and Cixi, the Tongzhi Emperor's two former regents, planned to reconstruct the Old Summer Palace under the guise of making it a place of retirement for them. However, the imperial court lacked the financial means to reconstruct the palace, and in 1874, the emperor consented to halt the project at the request of the court. During the 1880s, the Gardens of Clear Ripples (now the Summer Palace) were renovated for Empress Dowager Cixi's use as a new summer retreat, although on a lesser scale.

The ruins of the European-style palaces are the most visible construction relics on the site today. This has caused some tourists to assume that the Old Summer Palace is entirely comprised of European-style structures.

Three green parks made up the Imperial Gardens of the Old Summer Palace: Garden of Elegant Spring, Garden of Eternal Spring and Garden of Perfect Brightness.

They encompassed over five times the size of the Forbidden City premises and eight times the area of the Vatican City, with a total area of 860 ac (3.5 sq km). Hundreds of buildings existed on the grounds, including halls, bridges, pavilions, galleries, temples, and lakes.

Hundreds of pieces of Chinese art and antiques, as well as rare copies of literary works and compilations, were also kept in the halls. Several iconic southern Chinese sceneries were recreated in them.

A wooden wharf in front of the Hall of Happiness in Longevity provided access to the Imperial family's quarters via water.

Why is the Summer Palace famous?

The Summer Palace is well-known for its rich history as a gathering location for Chinese officials and foreign guests, as well as being the favored retreat of Qing Empress Dowager Cixi. The Summer Palace is a popular tourist destination because it provides a natural respite from Beijing's urban jungle. You can visit the Garden of Virtue and Harmony, the Wenchang Hall, Suzhou Market Street, and the Buddhist Incense Tower inside the Summer Palace.

Why was the Summer Palace destroyed?

To revenge the murders of many British envoys in Beijing, Britain's High Commissioner to China, Lord Elgin, ordered forces to demolish both the Summer Palace and the Old Summer Palace in 1860. Elgin hoped to chasten China by striking locations of cultural and imperial importance.

Where is the Summer Palace located in China?

The Summer Palace is located in northwest Beijing in China.

The Imperial Garden, built by Qing Emperor Qianlong between 1750 and 1764, is integrated within the Summer Palace in Beijing, with various classical halls and pavilions.

Was the Summer Palace rebuilt?

The Imperial Garden was destroyed during the Second Opium Battle in the 1850s, but Emperor Guangxu rebuilt it and renamed it the Summer Palace.

Who lived in Summer Palace?

It was the home of Empress Dowager Cixi, who lived a pleasant life there.

Why is the Summer Palace important to China?

The Summer Palace is important in Beijing, China, since it currently serves as a repository for national historical materials.

How many rooms are in the Summer Palace?

There are many rooms and quarters inside the Summer Palace, but the exact number is not available.

Why and when was the Summer Palace declared as a World Heritage Site?

The Summer Palace was added to the UNESCO World Heritage List in December 1998.