56 Facts About New Mexico: Know About 'Land Of Enchantment' | Kidadl

56 Facts About New Mexico: Know About 'Land Of Enchantment' 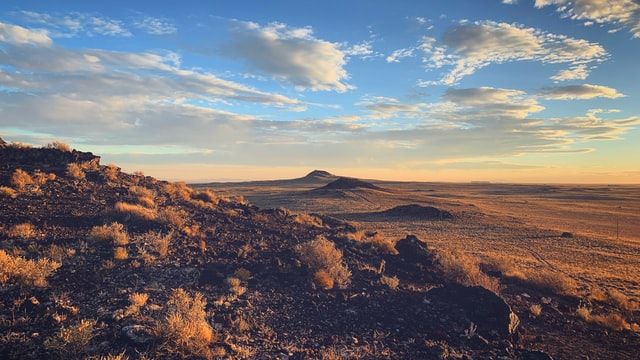 New Mexico is a famous tourist destination, as it's packed with adventure.

New Mexico is in the mountain state of the United States. It 's situated in the Southwestern region.

The state of New Mexico shares its four corners with Arizona, Utah, Colorado, and the region of the western United States. New Mexico has Texas to its East, Oklahoma to its southeast, and Sonora to its south. It is the 36th most populated state, with Santa Fe as its capital. It is the fifth largest state and covers a total area of approximately 121,591 sq mi (314,918 sq km). New Mexico has a unique topography that comprises scanty desert to forested mountains.

New Mexico has a rich history and from the archeological evidence, it has been documented that human settlement in New Mexico is as old as 9200 BCE. However, this state has been subjected to colonization and warfare before it became an official state. More historical facts about this state are discussed below.

The earliest inhabitant of New Mexico from the northern regions via the Bering land bridge.

The ancestry of New Mexico can be traced back almost 11,000 years during the existence of the Clovis culture.

The Anasazi or Ancestral Puebloans later inhabited this area after the discovery of agriculture.

The Pueblo people evolved from the Ancestral Puebloans.

The Pueblo people of this region mostly settled near the five rivers, including the Pecos, Rio Grande, San Juan, Gila, and Canadian.

Francisco Vásquez de Coronado was on a quest to find the Seven Golden cities of Cibola.

As the Spanish settlers were occupying the land, thus this led to several conflicts between the Native American and Spanish colonizers.

Mexico became independent of Spain in 1821 and at that time New Mexico was a part of the Mexico region.

The Mexican-American war took place in 1846.

The capital of New Mexico which is Sante Fe, is situated at 7000 ft (2133.6 m) above sea level and thus it's considered as the highest capital.

There is an international border between Mexico and New Mexico.

New Mexico is further divided into three regions, which are the Great Plains, the Rocky Mountains, and the Basin region.

New Mexico has the largest dune that is composed of the mineral gypsum.

The climate of New Mexico is primarily semi-arid or arid.

The mean annual temperature of New Mexico ranges somewhere between 64°-40° F (17.7°-4.4° C) or perhaps lower in the elevated mountains.

The warmest month in New Mexico is July, while the coldest month is January.

New Mexico is a state that has an amalgamation of different food, culture, language, and literature. From the history of New Mexico, it's evident how each culture and civilization has some impact on the current cultural scenario of the state. Thus, some of the unique aspects are stated below.

Bizcochito was acknowledged as the official state cookie of New Mexico in 1889.

The staples of New Mexico are chicken and beef enchilada, Chiles Rellenos, tamales, and more.

The primary languages that are widely used in New Mexico are English, Navajo, and Spanish.

63.96% of the population speaks English in New Mexico.

New Mexico has the maximum number of Ph.D. per capita.

The Western New Mexico University Museum and Deming Luna Mimbres Museum are some of the important cultural centers.

The majority of the residents in New Mexico identify as Roman Catholic.

New Mexico, when compared to the other states of the United States, is considered to have a low economy. New Mexico depends on the export of raw materials largely and is mostly put through to shifting demands. Some of the facts about the economy of this state are as follows:

Half the income of the state is derived from its natural resources such as natural gas and oil.

The town of Gallup is the trading center of more than 20 varied Indian groups.

New Mexico ranks amongst the lowest per capita income.

Tourism is a prominent source of the economy of Mexico, as it is considered the 'Land of Enchantment'.

Besides the historic, geographic, cultural, and economic facts, here are some miscellaneous facts about New Mexico.

The atomic bomb that was detonated in New Mexico, was a few weeks later dropped in Nagasaki of Japan, during World War II.

The state poem of New Mexico is Nuevo Mexico.

As one-third of families in New Mexico speak Spanish, the constitution of the state has declared it a bilingual state.

Robert Goddard, popularly known as the father of modern rocketry, arrived in New Mexico to examine rocket-ship prototypes in 1930.

Once miners unearthed pure silver veins at the Lake valley that could be chopped off in blocks.

Some of the New Mexican who speak Spanish are considered a descendant of the Spanish settlers of the pre-18th century.

New Mexico was incorporated into the Union on January 6, 1912.

The Tia Sophia of Santa Fe claims to have invented the breakfast burrito in 1975.

You may know a lot about New Mexico but, did you know these amazing facts about it?

Not only is Santa Fe the oldest city in New Mexico, but also the United States’ oldest capital was founded in 1610.

The first detonation of a nuclear weapon occurred in the Jornada del Muerto desert on July 16, 1945. This desert is situated almost 35 mi from Socorro in New Mexico.

From the top of the Capulin volcano, you can see five different states.

The Santa Fe trail has an extinct volcano that once served as a landscape marker.

The largest fire in the history of New Mexico broke out in the Bandelier National Monument of National Park Service on May 4, 2000.

The Carlsbad Caverns have more than 119 caves to explore.

The territorial Governor Lew Wallace wrote and published his historical novel in 1880 called Ben-Hur. Later in 1959, this novel was adapted into a film.

One out of four people in New Mexico works for the Federal Government.

New Mexico was once the uranium capital of the world.

The Governor's palace in Santa Fe is deemed the oldest government colonial building in the US.

Q: Is it illegal to dance with a sombrero in New Mexico?

A: Yes, it is illegal to dance with a sombrero in New Mexico.

Q: What is New Mexico famous for?

A: New Mexico is famous for numerous reasons, be it its history, culture, or food. However, some of the important aspects of New Mexico are the Carlsbad Caverns National Park, White Sand National Park, Rio Grande, its cowboy culture, Chaco Culture National Historical Park, and more.

Q: What is New Mexico named after?

A: New Mexico is derived from the Spanish name that is assigned to the upper Rio Grande River in Nuevo Mexico. Primarily, Mexico is an Aztec spelling that refers to the place of Mexitli who was an Aztec God.

Q: Does New Mexico get snow?

A: Yes, New Mexico gets snowfall.

Q: What is New Mexico's food?

A: ‘Red or Green’ is the state question of New Mexico.

A: Due to the presence of a huge quantity of red soil in the flood period is the reason why it is referred to as Red River.

Q: Is New Mexico a desert?

A: New Mexico is primarily depicted as an arid dessert.

Q: What is New Mexico's tree?

A: The official state tree of New Mexico is the Pinyon Pine tree.

Q: What dogs are illegal in New Mexico?

A: Pitbulls, German shepherds, and Rottweilers as considered dangerous dogs and are illegal in New Mexico.