Frog Head: What's So Special About It? We Bet You Didn't Know | Kidadl

Frog Head: What's So Special About It? We Bet You Didn't Know 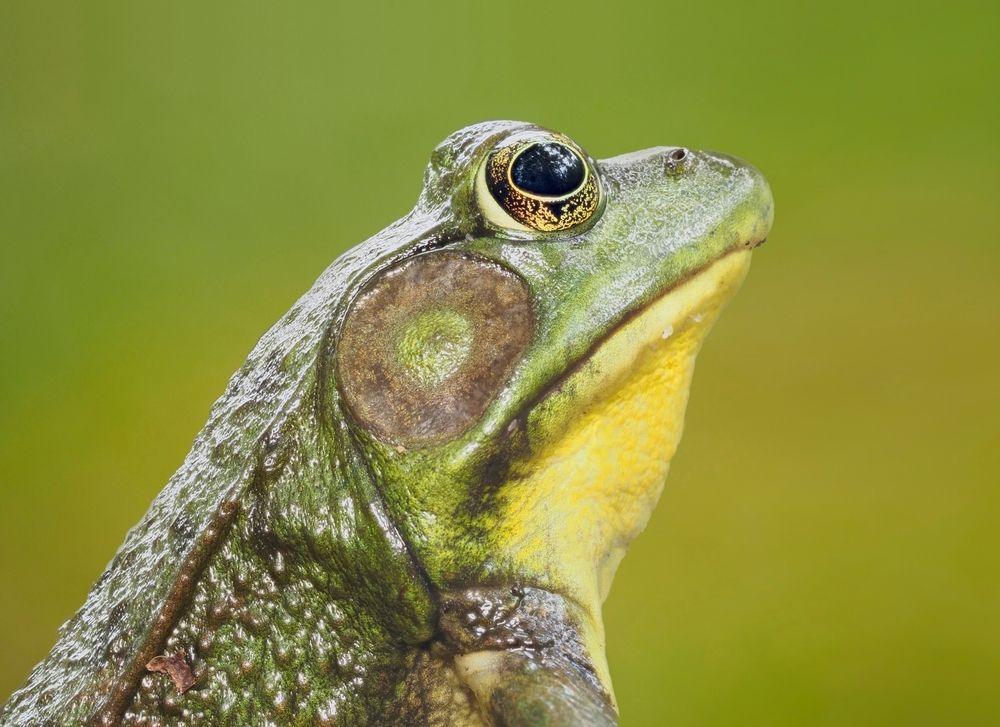 The surface of a frog's head might be consistently sleek, yet the interior can be prickly and strange.

The frog's sense perceptions are very well suited to both land and water since it dwells on both the ground and in water bodies. Due to its need to be constantly aware of its surroundings, it also has many sensory organs on its head as well.

Since frogs are also both hunter and prey, the majority of such sensory organs are located on the frog's head. While their body stays submerged, these reptiles may maintain their heads slightly just above the water's surface to take in views, noises, scents, tastes, as well as other experiences.

There are around 7,000 different species of frogs. Researchers have gathered data from 158 species covering all of the main frog groups; they discovered a wide range of skull forms, but they also discovered that a few of the variants' traits emerged in different branches separated by evolutionary processes that were not present in ancestors.

Frog skulls might appear sleek and spherical on the exterior, but glance beyond the shell of certain varieties, and you'll discover skulls filled with spikes, spines, and other bone characteristics that mimic the skulls of fabled monsters.

Recently many researchers have found unique distinctions inside a frog head. The shape of frog skulls, for example, that protects the species from predator rams and attacks, is very interesting, as it has many spikes and grooves.

A study was done by Daniel Paluh where he found that frogs have a different density in their skulls at different parts. This research by Daniel Paluh showed that certain frogs were covered in pits and grooves on their body, and most of these frogs were predators that ate other vertebrates as prey.

Skulls of organisms with identical eating patterns or defenses tend to be similar in form and structure. Frogs may appear to be identical, yet their skull shows significant distinctions, according to Daniel Paluh.

Some of the strangest skulls have been discovered in frogs that eat birds and animals or vertebrates, utilize their heads as a shield, or are venomous on just a few rare occasions. Their skulls demonstrate how bizarre and varied frogs can be.

Not only would strange skull forms commonly emerge simultaneously but they're also linked to frogs that consume huge prey or defend themselves with their heads. Frogs that devour other animals, such as birds, reptiles, other frogs, and mice, have large, spacious skulls with a rear jaw area. Whereas most frog species were topped with a flat finish skin and a basic skull form, other frogs have acquired fancy characteristics and features, including false fangs, complex crests, helmet-like protection with a wide skull, and venom-delivering spikes with evolution.

This allows them to scoop up their food with a large gape. The skulls of these species are powder coated with small pits, which may give added power and biting strength.

Along with the skulls of these animals being hollow, they are also covered with tiny spikes. As a protection mechanism, specialized spikes penetrate venom glands just beneath the skin when an attacker assaults the head of some of those frogs.

Additional layers of bone were often used to create elaborate patterns of ridges, bony spikes, grooves, and pits formed on dramatically deformed heads of these creatures.

Most frogs have two nasal passages, two eardrums, and two eyes. Each eyelid has three layers, one being exposed. Whenever the frog is moving underneath the water or on a swim, this third eyelid and extra layers, also known as a nictitating film, cover the frog's eyes and help to keep the eyes wet whenever the frog is on the ground.

The mammals' mouth contains four unique teeth that aid to grab and in catching, and swallowing prey that frogs eat.

A frog's head has both internal and external parts, and they have different characteristics. External nostrils, an esophagus, a Tympanic Membrane, and a Glottis are all present on its head. Tongue, Maxillary Teeth, Vomerine Teeth, and Eustachian tube apertures are all located inside the jaws.

Frogs that are predators are seen to have slightly different skulls, and this is a trait of the frog that has developed after millions of years of evolution. The research done by scientists to bring this out into the world is fascinating.

Although almost all frogs do not have teeth in their bottom jaws, some have acquired inferior fang-like features that allow them to penetrate their food. Other frogs use their skills to defend their burrow from predators by plugging the opening with their skulls.

Why frogs cannot turn their head?

Frogs have wide, flattened skulls featuring enormous sockets or openings to accommodate their massive eyes. They can't turn their heads since they don't have a neck. Just one frog species bears teeth in both the top and lower jaw.

Both during daytime with light and nighttime with darkness, frogs have exceptional eyesight, having an angle of vision that enables the species to see to the front, flanks, and somewhat behind themselves. Since the frog can't just turn its head or push it up and down, this is vital for identifying predators. The top and bottom eyelids are both undeveloped and do not move much for these amphibians.

The frog's body composition, or biology, is nearly identical to that of humans. Humans and frogs generally get the same kind of specific organ networks. The structure of these amphibians, however, is more basic.

The brain, mouth, eyes, ears, and nose are all housed inside the small head of this species. Very minimal head movement is possible due to a short, virtually stiff neck. With the exception of an increased region that encloses the little brain, frogs share a flat skull.

The frog's spine, or vertebral column, is made up of only nine vertebrae. The nervous system of the frog is highly advanced. It is made up of three parts: the brain, a spinal cord, and nerves.

Tadpoles usually have eyes on the sides of its head, and as they mature, it moves to the top of the skull.

A frog may find out a lot about itself and its surroundings by looking at its skin. Heat, weight, contact, and discomfort can all be detected. The lateral line is a distinctive characteristic of an underwater frog that makes it specially fitted for living underwater.

The lateral line sensors may be found all throughout the frog and its neck, not just on the skull and across the eyes. They sense tremors in the liquid, which provide the frog with information about the form and movement of prey in the water.

Here at Kidadl, we have carefully created lots of interesting family-friendly facts for everyone to enjoy! If you liked our suggestions for the article on frog head, then why not take a look at how to do frogs mate or poison dart frog facts?